With technicolor leaves and an excess of pumpkin spice tumbling through the air this autumn, what better way to gear up for the Halloween season than to visit a historic (possibly haunted) building? Dozens of properties across the city qualify to be on the National Register of Historic Places and have been weathering the sands of time for decades. Read on to hear about ten historic properties with inspiring pasts and some spooky architecture!

Gallatin County Jail
317 W Main St, Bozeman
It is somewhat fitting that the first item on this list has been repurposed into the Gallatin History Museum: an establishment dedicated to collecting and preserving the history of the Gallatin Valley. Built in 1911 by famed architect Fred Willson (who, for the most part, has been involved in the design of most every entry on this list), this structure originally intended to provide additional space for the city’s courthouse as the local population rose. A tunnel was excavated to connect together the jail and courthouse for secure prisoner transfers, and its Castellated Medieval construction provides a foreboding, somber atmosphere.

Now transformed into a museum, visitors can approach the cells that used to hold county prisoners, and embrace the heebie-jeebies of an execution gallows on display that was used for criminal executions a century ago. A wonderful combination of morbid history and beautiful construction, this brick building is sure to give you goosebumps if you happen to pass by during the night. Be sure to check out any of its upcoming events by visiting GallatinHistoryMuseum.org!

Holy Rosary Church Rectory
220 W Main St, Bozeman
Boy, you know what’s spooky during the night? Any empty church. What else? Probably, a building that incorporates Neo-Gothic features. Put them together and what do you get? That’s right—the Holy Rosary Church Rectory! A stately and elegant building incorporating stone sills, window hoods and a Gothic entrance, this granite-brick rectory was built in 1912 as an auxiliary church addition. With a crenelated, overdoor feature that brings formidable castles and crumbling cathedrals to mind, this building would certainly cast shadows to help you walk by faster.

Originally designed to accompany the replacement of an older, wooden Catholic Church, the construction fell into controversy, with some parishioners feeling that its building costs were not justified for such a small demographic at the time. According to historicmt.org, the final construction ended up totaling over $65,000, the equivalent of a whopping $1.17 million in 2009! Now that’s scary expensive!

Federal Building and U.S. Post Office
10 E Babcock St, Bozeman
The newest building on this list is this imposing and stately structure built in 1966. It’s one of the biggest designs of its time in Bozeman, and rivals Montana State University as the town’s biggest modern construction. This gargantuan behemoth, built with five stories of New Formalism architecture, is home to federal offices as well as the local post office. Its sheer presence helps to convey authority of the federal government, while its smaller design elements—such as simple pilasters or decorative columns—run vertically alongside the building’s windows and doors to aid in an aesthetically pleasing design. While inside, numerous community members strive to make their local neighborhoods even better, the external characteristics of the Federal Building form an intimidating shadow for anyone who may find themselves walking in it.

Dokken Funeral Home
113 S Willson Ave, Bozeman
A respectable and dignifying place to help lay loved ones to rest, this funeral home has served the Bozeman community since it was built in 1936. Drip molds and Neo-Gothic Revival features help to generate an air of dignity around the building, and simulated buttresses give the building’s façade a regal presence. Historically, the business was run by H. H. Dokken and M. F. Getchell, and later by H.H. Dokken, Howard I. Nelson, and Roderick M. Kippen, before Kippen’s death in 1954.

Currently, the Dokken Funeral Home is operated by Chris and Monica Remely, who offer support and a variety of services for the dearly departed. As far as funeral homes go, it is hard to come across one with more architectural influence than this Neo-Gothic Revival, and it’s certainly a historical staple of the Gallatin Valley worth seeing. Drop by the business on South Willson Avenue and see for yourself!

Blackmore Apartments
120 S Black Ave, Bozeman
People have been living in apartments within Bozeman for a little over a century now! The Blackmore Apartments were constructed as the city’s first apartment building in 1913, with the U-shaped, Prairie Style complex originally hosting a tennis court, or ice-skating rink during the winter. At the time, the state-of-the-art apartments boasted five-and-a-half bathrooms, built with Italian octagonal tiles and plaster. Originally, the building was named after Lord and Lady Blackmore, visitors who accompanied Fred Willson in travels through Yellowstone National Park. However, Lady Blackmore soon passed away from an unexpected illness, and as a memorial, Lord Blackmore donated money to purchase land for the creation of Sunset Hills Cemetery. Don’t let a tragic origin story haunt you though; the Blackmore Apartments offer stately architectural features that complement the similarly stark and chilly Gallatin Valley!

Brandenburg House
122 W. Lamme, Bozeman
Bearing elegant Italianate detailing, and once deemed to be “one of the most architecturally significant houses in Bozeman,” the Brandenburg House was built as the Northern Pacific Railroad arrived in 1883, and showcases one of Bozeman’s last I-House style abodes. Engraved brackets adorn pillars that hold up the building’s porch roof, and it displays elegant window hoods, accentuating the structure’s iconic, architectural themes.

Alongside his wife Mary, William T. Brandenburg—a carpenter from Minnesota—resided in the iconic home until 1940. The nostalgic structure on West Lamme Street does a wonderful job of reminding residents about this once-popular house design, and providing a pleasing aesthetic for its surrounding neighborhood. The house seems admittedly less spooky than other structures previously mentioned, but exists as a wonderful and endearing historical treasure regardless! 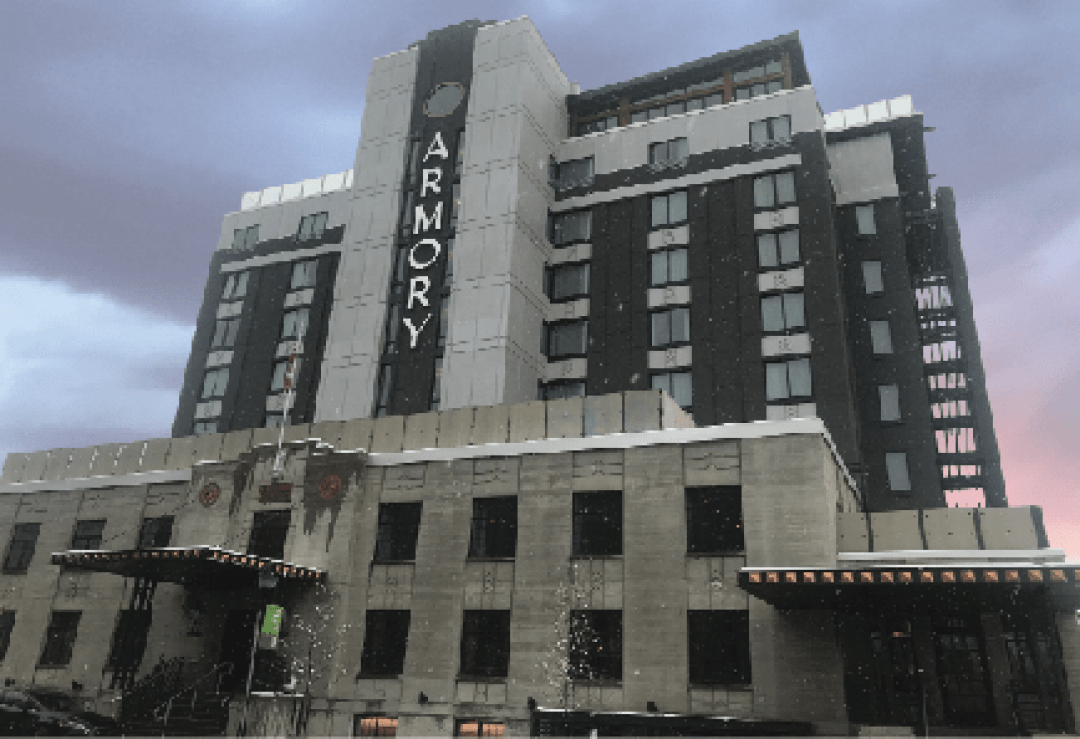 Bozeman Armory
24 W Mendenhall St, Bozeman
Exhibiting a nostalgic neo-deco style, this building was originally constructed in response to the bombing of Pearl Harbor in 1941. With the majority of the building being composed of concrete, it exists as one of six similar sites built in Montana. Now, though, it has been refurbished into an impressive hotel, with its imposing straight-line details and chevron decorations accentuating its height.

However, the Bozeman Armory’s transformation into a hotel almost didn’t happen! After sitting abandoned for a few years, the structure was sold to the city of Bozeman in 2003, and after several attempts to transfer the property to developers, it finally traded hands for $1.2 million. The building is now considerably higher, though the original three stories of the armory can still be seen today.

St. James Episcopal Church
5 W Olive St, Bozeman
There is just something spooky about Neo-Gothic Revival architecture. Its arched windows and pointed towers instill images of vampires and werewolves, and one of Bozeman’s first-organized churches is no different. The St. James Episcopal Church was originally formed around 1860, and the mortared stone building was built in 1889. George Hancock, the famed architect from Fargo, North Dakota, designed the church with a full Gothic Revival theme in mind: the structure displays decorative buttresses, Gothic windows, and a steep-sloping roof. While the building incorporated slightly more subtle Colonial Revival elements in the 1940s, it still exhibits an almost otherworldly appearance—leaving passerby feeling slightly uneasy about any flitting shadows or suspicious creaking.

R.T. Barnett and Co.Building
13 E Main St, Bozeman
When on the prowl for spooky buildings with rich history, nothing covers both topics better than this building, constructed in 1890 by Robert Barnett, a businessman looking to take advantage of the popularity that mining had enjoyed in the region. Its arched doorway and upper turrets showcase an inspiration stemming from byzantine-revival features that help accentuate what was, at the time, one of Bozeman’s original general stores. Additionally, a subtle, Roman Arch built above one of the structure’s windows instills feelings of mystique to those who pass underneath it. As of 1980, the building has seen efforts of preservation to protect its unique architecture and what once existed as the town’s grocery store, hardware store, and J.C. Penney’s.

The Hotel Baxter
105 W Main St, Bozeman
Opened in 1929, the Hotel Baxter was a triumph of architect Fred Willson, and its construction was funded mostly by private investing—among them, the investor it’s named for: Robert Baxter. Built with its iconic applications of olive, terra-cotta trim, this seven-story building hosted 72 private rooms, several banquet halls, and a grand ballroom before its renovation in 1981. Its imposing height is sure to sprain any necks looking on from below.

Nowadays, condominiums and apartments have replaced the guest rooms, but the building’s external structural elements remain, including the original iron scaffold on the building’s roof that holds its sign. Arched doorways and recessed windows help define the Hotel Baxter as a unique addition to Bozeman’s cultural image and should be seen at least once, should you get the chance!

Though some components of this list might admittedly be less creepy than others, each arises from an important history and background that has helped to shape Bozeman’s unique history. From religious communities to entrepreneurship, many buildings contributed to their communities in ways that improved life for its residents and could be argued to have made them into the fantastic bastions of small-town life they are today. And, many of these community buildings are still around! If you happen to feel so inclined, a visit to some of Bozeman’s historical sites is sure to teach you useful history about the area and highlight why preserving these community treasures is so important.