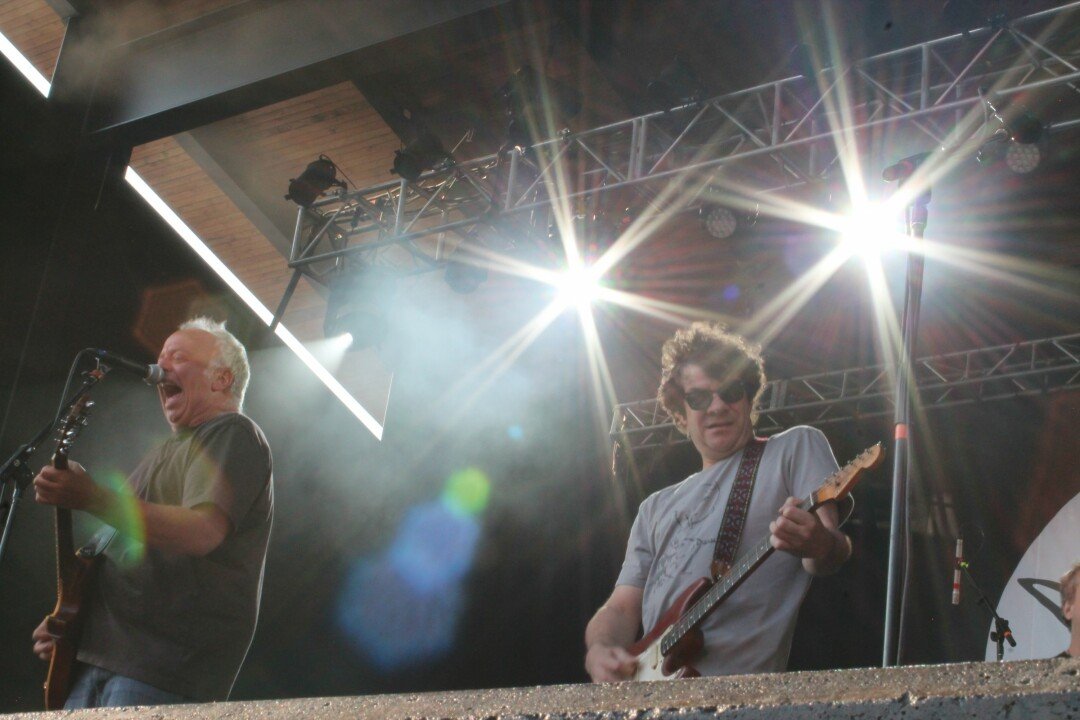 First off I will admit, I am a huge Ween fan. Pure Guava did not leave my cassette player for all of 1999 and 2000. A friend of mine at the time once referred to it as my Bible and he was not that far off. I have not shut up about the band ever since. They have made a bigger impact on me musically than nearly any other band I can think of. I have seen them live a handful of times, the most recent being last October at Bill Graham Arena in San Francisco.

Every time I have seen Ween, I've walked away saying it was the best show I've ever seen, but I'm not totally sure I can say that about the KettleHouse show. The show was great but seemed to be affected by a combination of technical issues (less than stellar mixing at times and feedback issues from the monitors), playing an earlier show that was mostly in the sunlight, and the occasional mistakes coming from the band, themselves.

It seemed to me that perhaps the band was a little tired and slightly unfocused. It could have been the altitude, it could have been that it was an earlier show (Deaner commenting that it was 'like morning' when they came out onstage), or it could have been the fact that they were a few weeks into their first tour since coming back from their break in 2016. The band has only been doing two or three day runs in various cities and the odd festival appearance until this summer's tour,so perhaps stamina was an issue.

More than once I've seen the band take a handful of songs to settle in and achieve lift off, but a solid “Pork Roll Egg and Cheese” opener followed by “She Wanted To Leave” and an ambitious “Buckingham Green” had the show off to a good start with the band members flexing their musical muscles early on.

Next came a block of rockers that caught me off guard (and apparently the sound guy, too) because they turned up loud and knocked out “My Own Bare Hands,” “The Stallion Pt2,” and a “Dr. Rock,” which I couldn't believe was happening this early in the show. The sound guy was snoozing on these because Gener's vocals were buried in the mix, which was unfortunate because the band was ready to rock. The audience? I'm not totally sure.

The mix issues were sorted out and we were back on track for epic versions of “The Golden Eel” and “The Argus” which seemed to go over much of the audience's heads. I was disappointed in the amount of chatter coming from the audience, but I chalked it up to it being a new venue and it being daylight. Montana audiences have a hard time not talking through shows as it is, but this was getting out of hand. Ween, being the true professionals they are, seemed to be calling multiple audibles from the stage during impromptu band meetings between songs and were able to get the audience right back on board with a well-placed “The Mollusk” and “Transdermal Celebration.”

The real goods came in the form of “I'll Be Your Johnny On The Spot,” which is a silly song about being a working class stiff that melted into a Deaner shred fest that reached the heights that I've come to expect from a Ween show. The band cooled things off a little bit with a nice “Bananas and Blow” followed by a double shot of disease songs: “The HIV Song” and “Spinal Meningitis (Got Me Down).”

As the sun was finally setting and the light show was able to play it's rightful part, the band launched into “Roses Are Free,” a song responsible for the influx of jam band fans due to Phish covering it back

in the day. Even so, it is a great song and a staple in the Ween canon, as well as a fitting closer.

For an encore, we got to hear an extended jam of “Fiesta” in which Gene disappeared from the stage for a while and apparently wasn't ready to come back yet, resulting in a rowdy version of the Motorhead classic, “Ace of Spades” with Dave Drewitz (bass) doing vocal duties. The final encore was a hilarious and epic version of “Buenos Tardes Amigo” that had me laughing as Gene followed up an amazing Deaner extended solo with an off-key and tinny sounding solo of his own.

All in all it was a great show, as Ween is incapable of delivering anything other than a top notch performance. I give it an 8/10 for Ween, which is still better than 90% of shows you are going to see, in my opinion.

The Kettle House Amphitheater is a beautiful new venue. I was surprised at the size. It was smaller than I had expected, but there are no bad seats; if you can call an outdoor amphitheater intimate, that would be a fitting description. They have some kinks to work out, as it was only the second show, but it has all the elements in place to be a great venue and now it will be stained brown for life.