Since 1994, Verge Theater has been bringing entertainment and opportunities for expression to Bozeman’s consumers of the arts. Known then as the Equinox Theater, (think Camp Equinox), in 2011 Verge emerged to fit the changing mission of the project—transitioning from being a theater company to a community theater with an emphasis on performing arts education and quality theater-making. Formerly nestled in a strip mall in north Bozeman for 25 years, 2022 has brought a big move for Verge—finding a new home within the Emerson Center for the Arts and Culture on Grand and Babcock, right in downtown Bozeman. The space may be a little smaller, but the spirit of the theater is bigger than ever!

Kate Britton and Jaelyn Silvey are shining examples of the bright light and spirit that Verge projects into our community; they are in charge of Verge’s yearly Teen Production, and have worked together on over seven shows. This year’s production is a 2016 musical, The Prom. Their synopsis: Four eccentric Broadway stars are in desperate need of a new stage. When they hear that trouble is brewing around a small-town prom, they know it’s time to put a spotlight on the issue… and themselves. The town’s parents want to keep the high school dance on the straight and narrow—but when one student wants to bring her girlfriend to prom, the entire town has a date with destiny. On a mission to transform lives, Broadway’s brassiest join forces with a courageous girl and town citizens, and the result is love that brings them all together. Winner of the Drama Desk Award for Best Musical, The Prom expertly captures all the humor and heart of a classic musical comedy with a message that resonates with audiences now more than ever.

My 14 year-old son was intrigued by this theatrical opportunity after seeing it posted on Verge’s Facebook page, so we got him involved! It has been an amazing after-school activity, a great way for him to make friends at other schools, and to have an outlet for his teenage emotions, frustrations, elations, and expressions is so important.Sitting down with Kate and Jae to highlight this production, talk about how amazing these kids are, and chat about Verge’s changes was a pleasure, and so important in a political and scholastic climate of cutting arts programs, as well as for our LGBTQ+ community.

MG: What are your favorite things about what this play has in it, or what it encompasses?

Jae: There are so many pieces of it that I love and enjoy; the technical stuff that is very accessible, music in the right range, and [the fact that] it’s written really well. On a bigger level, the message of the show is so important right now. A lot of our teens are part of the LGBTQ+ community. Having a show that centers around the acceptance and struggles they go through being a high-schooler in that community just feels so fitting right now in our world, which is so chaotic and seems to be putting up wall after wall for people to try to get through.

Kate: It’s been really disheartening as a Montana resident to see so much anti-trans legislature bills go through the legislature, like SB 99 being used to stop same sex relationships from being talked about in school, and any kind of representation… a lot of rights are being taken away, and it feels scary. I think about all the teens as my kids, but I see them being not supported in their schools and not as supported by the community. This show has so much heart in its messages. It really isn’t preachy. It makes you laugh, and then it gets in these nuggets of truth while you’re laughing and it’s just this beautiful message of the simplicity of love. What it is to love someone else and how nothing matters other than that. It’s really beautiful to see them stand strong, and say and sing these things that are really needing to be heard.

Jae: They made me cry at the end of rehearsal today because one of the songs is really hard. It’s just so impactful and meaningful. You don’t have control over who you love. You just love, right? Watching them stand strong, I could see how much they believed in the words they were saying. It was so touching, I cried. 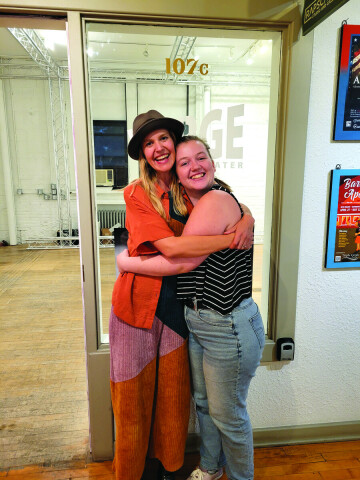 MG: How many kids do you have in this teen production?

Jae: Sixteen, and (gestures towards Kate) this is our seventh show together.

MG: How many of those kiddos would have a lead role?

Jae: Everyone is very important to the show! Especially with the smaller group of kids we have.

MG: I think it’s also amazing that you guys make it so accessible to everyone — it just means the world, especially to kids and parents who wouldn’t have that opportunity any other way, but totally have that heart in it, and also just having similar kids to be around and not have to feel like you have to “pay to play” or things like that.

Kate: There’s no need for that here. Making it financially accessible to everyone is really important for me. I don’t think those opportunities should just be for a certain section of Bozeman, I think they should be for everyone. All our classes are available as pay what you can afford, or nothing. All you have to do is ask. We’re doing everything we can to keep that policy. What’s really cool though, is that there are a number of people who pay double, or sometimes even triple, to sponsor some other kiddo and that’s really lovely, too.

MG: It’s great that people have that much consideration in their hearts to have that consciousness of [realizing that] not everybody is going to have this kind of extra money, but those kids still want to participate.

Kate: Our Verge community has so many qualities of generosity, kindness, and acceptance; it’s such a pleasure to be part of the cycle.

MG: How many other productions or different kinds of things do you do throughout the year?

Jae: This year, we have three mainstage productions slated for CTF, and we have two plays and a musical. I’m not sure if I’m allowed to announce them yet! They’re very similar to Teen Theater in that they’re open to everybody. Open auditions, nobody’s pre-casting anything. It’s come as you are, enter into the space as you are!

Kate: And we are always welcoming people that want to work behind the scenes. People who are interested in lights, or set design, costumes, art history. Perfect. Yes. Come on down. We’ll get you on our volunteer email list! In addition to those mainstage shows, we’re doing staged readings about once a month. We’re just doing fun, simple, staged readings for plays that we really love but can’t commit to for mainstage productions.

MG: When does The Prom open?

Kate: November 4th at 7pm. Tickets are $15 and can be found on the Verge’s website. There are two more shows happening on the 5th — a matinee at 3pm, and our final performance that night at 7pm.

MG: What will the next project be?

Jae: Two weeks after we open The Prom, we open the next mainstage show, which is Middletown. It opens on November 18th, and runs until December 11th.

MG: When you recruit for actors, who does that, or is it a group effort?

Kate: Good question. It has been our Executive Director, Hilary Parker, but Hilary is leaving in November. We love Hilary; she has hugely impacted Verge and will be leaving a pretty incredible legacy. Our Board President, Julie Seitel is stepping into those incredibly large shoesand taking over a lot of production duties, and we are hiring an Operations Manager to keep the wheels on the bus until we find someone who is a good fit to be our Executive Director.

Verge has been blessed by the leadership and tenacity of Hilary Parker for the last five years, andit is sad to see her go, but we are excited for the future, both for her and Verge!

Expressed in a publication released by Verge, from Board President, Julie Seitel,

"The Board of Directors and I are incredibly sad to lose Hilary's leadership, but we recognize that change can be good for an organization if embraced as an opportunity for transformation rather than mourned as a loss. The pandemic changed our world suddenly and in ways we never anticipated, and Hilary pivoted on a dime to lead Verge to—and through—the major changes necessary to ensure we would weather the storm. She saw the possibilities that came hand-in-hand with the losses the pandemic forced on us, and we can do no better than to follow her example in seizing the opportunities we encounter. Hilary will be so missed, but Verge looks forward to seeing her in the audience often!

Interested in acting, writing, being on stage, being backstage, helping with sets, costuming, hair or makeup? Or maybe you would like to learn more about theater-making through classes? Reach out to Verge today to get involved! Visit www.vergetheater.com, or find them on Facebook and at vergetheater on Instagram!