Little Bear Schoolhouse: Journey into the Past

With its log walls, wood shingle roofing, wood floor, dusty chalkboard, tracked desks, and iron woodstove, the Little Bear Schoolhouse in Gallatin Gateway looks just as it did when the last teacher locked the door in 1950. The greatest change is that it was lifted and moved five miles north to a less remote site, and faced with a welcoming vestibule. Visitors can experience the authentic schoolroom every summer weekend.

Gallatin County’s one-room schoolhouses were established soon after homesteaders arrived in the late 1860s. After Montana’s recognition as a state in 1889, as few as four members of a community could petition to create a school district and receive state funding. Transportation challenges (terrain, weather, form of conveyance) often resulted in schools being just five miles apart. Gallatin County grew to have 77 school districts; yet, as roads improved, school districts consolidated and some of the buildings were abandoned or used for other purposes. 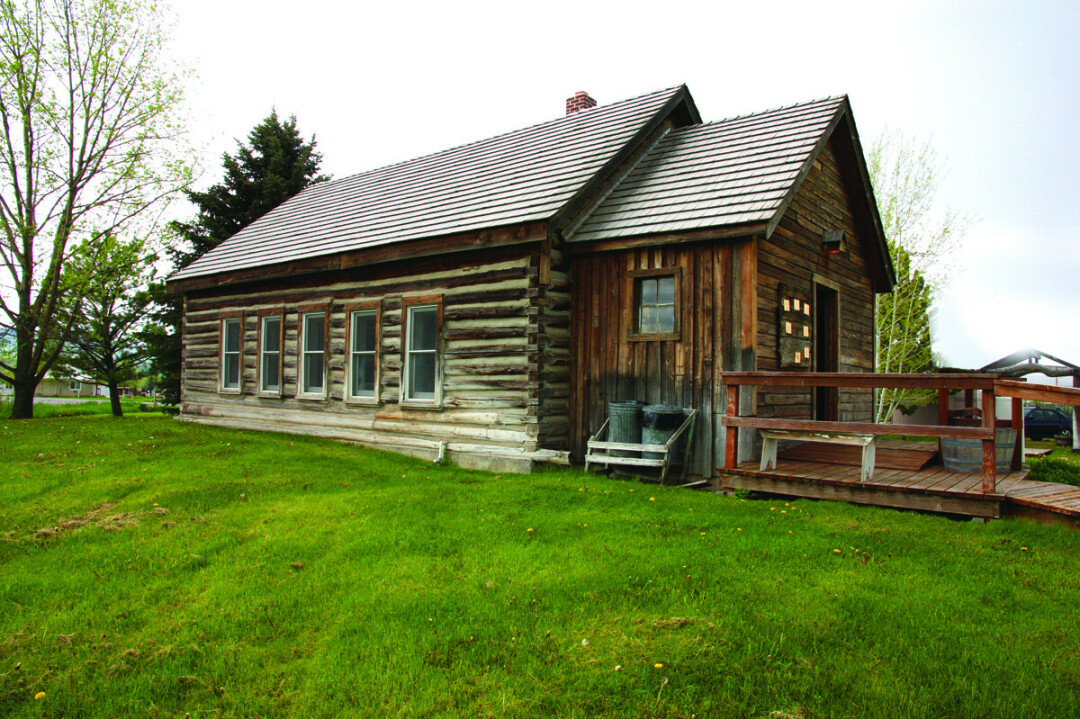 The rusticity of the little log schoolhouse known as Little Bear belies the value of the education that was received within its walls. Children within a five-mile radius were well prepared for life beyond the school district. Reminiscences of former students reveal a richness of life and learning that Montana encouraged and supported. In 1901, when such log structures were more common in Montana, it was believed that “The log schoolhouse of Montana is the pioneer of the public school system, and when its walls were raised, there was laid the foundation of one of the best educational systems to be found in the West.” Little Bear’s log cabin construction was unusual for 1912-13, the time, when frame construction had become more common. The simple gable-front form was typical, however, as was the configuration of the rectangular plan.

When a local craftsman erected Little Bear Schoolhouse in 1912-1913, for the meager sum of $100, even the one-room rural school buildings were being carefully conceived to provide proper lighting, heating, space, and ventilation. A 1913 Montana law required that the State Board of Health, in coordination with the State Superintendent of Schools, regulate the design of all schools whose construction costs exceeded $500. Although Little Bear was not subject to these requirements, the school district was seemingly aware of them, and in general compliance. The lighting issue has continued to be one of interest to historians, who espouse several theories for varying window locations. As of 1911, contemporary publications regarding school architecture opined that: “The hygienic value of protecting the eyes of the pupils by admitting the light at the left or the back is being generally understood. If the room be lighted on two adjacent sides, either the teacher or the pupil must face the light. By common consent, the teacher has been made the victim.” The model school room was 24 x 32 feet and had four large, full-length windows, opening south. Little Bear’s school room was 21 x 28.33 feet and had five windows facing south. A late 1914 news article about schoolhouses in Montana mentions that Little Bear School was one of those that was remodeled “along modern lines, with the windows on the left side…” This feature was in accordance with the latest recommendations, yet there is no evidence of righthand side windows having been removed. 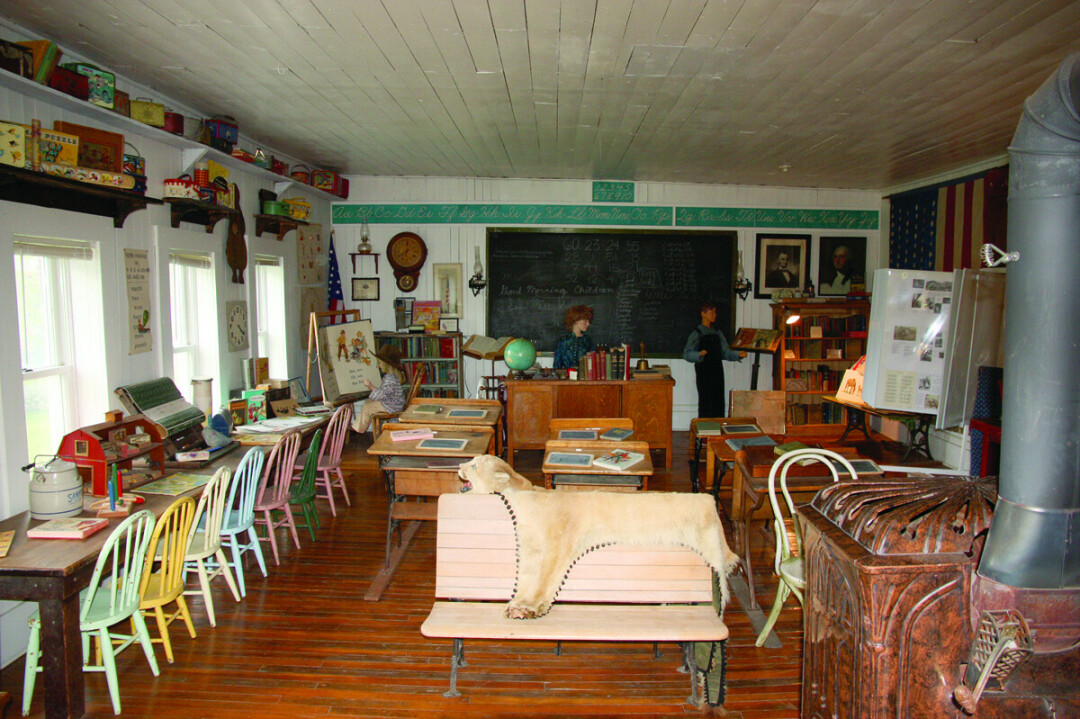 Little Bear had five windows, not full length, originally facing south (now facing east), and two large windows flanking the entry on the east (now north) wall. Another justification for locating windows to the left of the students included the desire to not cast shadows on their writing (this advantage was afforded only to right-handers); some favored placing the windows on the north wall for even year-round illumination. While not supplied with modern plumbing and toilets in the building, the Little Bear students did have access to two separate outhouses – one for each gender.

Little Bear Schoolhouse students attended Little Bear for grades 1-8; older pupils were bussed to Bozeman. School population peaked at 28 in 1920, then slowly declined through the decades to 13 in 1930, eleven in 1940, and seven in 1950, after which Little Bear consolidated with Wilson Creek School. The combined schools taught 23 students in 1959. Records reflect that there were 106 students and 35 teachers in Little Bear’s active school years.

The Little Bear Schoolhouse remains today due to the dedication of a group of civic-minded residents who convinced its then-owner (the Sabo family) to donate the building, and the DeRham family to provide a more accessible site to move it to. The group resolved to convert it into a museum to preserve the community’s history. In August 1990, they hosted a reunion at the school’s original remote site by Little Bear and Portnell Roads adjacent to Big Bear Creek, before its move to its current location at 76200 Gallatin Road, south of the Gateway Exxon Market.

Attendance at the 78th all-grade reunion for Little Bear School alumni reflected a ‘who’s who’ list of early Little Bear area settlers: Smith, Badgley, Brenner, Clayton, Portnell, Reiser, Seitz, Murray, Newby, and Egeler. Many wrote letters with their memories of the school, speaking fondly of their teachers, and how they cherished their school years at Little Bear. 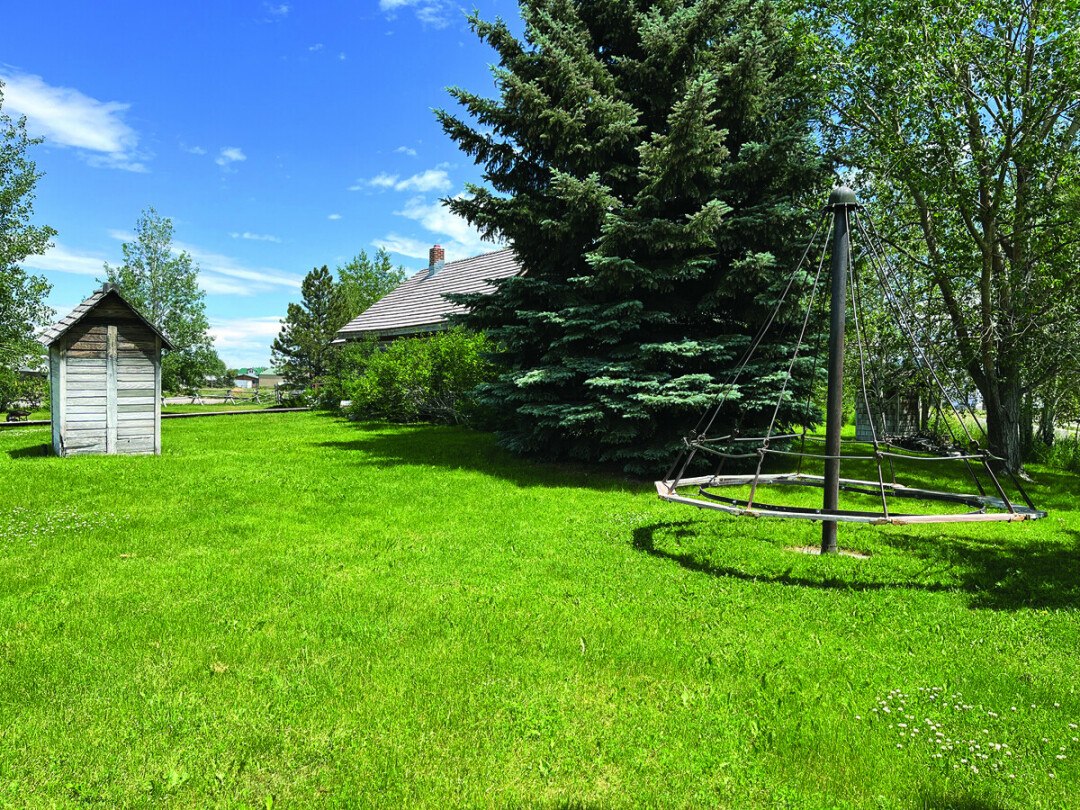 “The teacher’s desk was in back of the room and a long bench sat beside it, which each class sat on for our discussion of our subjects. Our drinking water came from the creek that ran past the schoolhouse, and each of us took turns taking the bucket down to the creek for the water. The restrooms were separate buildings in back of the school house…A teacher, Mrs. Gee, lived with us when she taught at Little Bear schoolhouse, and when you have a teacher living with you, your homework is done. If it wasn’t, she would scold us and tell us we were playing too much – no excuses. I am very, very grateful for what she did.” Lucille Carter (of Rowland Heights, CA in 1990)

“I hope the old phonograph is still around with the record ‘Narcissus.’ It was seldom played, but what a treat! Mrs. Hyde gave us the privilege to listen to such beautiful music, I thought. Then we had to learn to identify different instruments. That part was a little difficult for me, having never been around anything but our old organ or a piano. The school district furnished the supplies, so we got a new pencil only once every six weeks. I thought that was such a long time to make one pencil last. I remember the lovely ruffled white curtains Aunt Lily made; I thought they were so pretty. And those rare days in the winter when it was too cold to go outside for recess. What a time we had when we could push the seats to one side and play ‘bean bag.’ This was made from a black stocking and filled with beans by Aunt Lily.” Clida Clayton Megee (years 1932-1936, who left the area at age nine) Sisters Marguerite Newey, Erma Brenner and Earline Love, all former Little Bear students, remember the smaller classes they had there with fondness. “We’d pull the desks outside to have dances,” Brenner said. “The neighbors who could play the guitar or the fiddle would come, and another neighbor would call the square dances. The whole neighborhood would bring their wagons and horses and dance until 2 a.m.”

Teachers were often single women who boarded with local families. One teacher who held classes in 1925-26, Miss Evelyn Treat, spoke of cold winter days when she rode to school from the Taylor’s, where she boarded for $75/month. Her salary was $90/month. The teacher had to get to school early to start the fire, light lamps when necessary, and fill the water crock before the students arrived at 8:00 am. To improve the education at all schools, salaries and teacher training requirements increased over the years. The 1931 teacher was required to have attended four years at an accredited high school and earned 72 quarter credits of approved academic and professional training. In 1936, the required number of quarter credits increased to 96.

One-room schoolhouses play a large role in Montana’s history, having provided education and a social venue for remote rural areas. There are still dozens of them in operation today, more than in any other state. In 1981, MSU’s School of Architecture surveyed the extant one-room schoolhouses in Gallatin County and used the survey to support a Thematic Resource listing in the National Register of Historic Places. Little Bear Schoolhouse was one of the schools included in the nomination. This listing was the starting point for a recent survey by Preserve Montana, the statewide preservation organization, and the Gallatin County Historic Preservation Board of the schoolhouses in the county. Thirty one-room schoolhouses have been identified thus far. Several have been converted into residences, some have been moved, and some remain intact and recognizable as schools.

For a tactile glimpse into our schoolhouse history, visit the Little Bear Schoolhouse Museum. It is open every Saturday and Sunday from 1 p.m. to 5 p.m. between Memorial Day and Labor Day. Oral histories and ice cream will be provided between 12:30 and 3:30 during Gallatin Gateway’s Bash on July 30. Admission is free. Donations are accepted.

Lesley M. Gilmore is a preservation architect based in Gallatin Gateway. She is an advocate for many architectural genres, as they each represent a place in time that had meaning for those who experienced it.