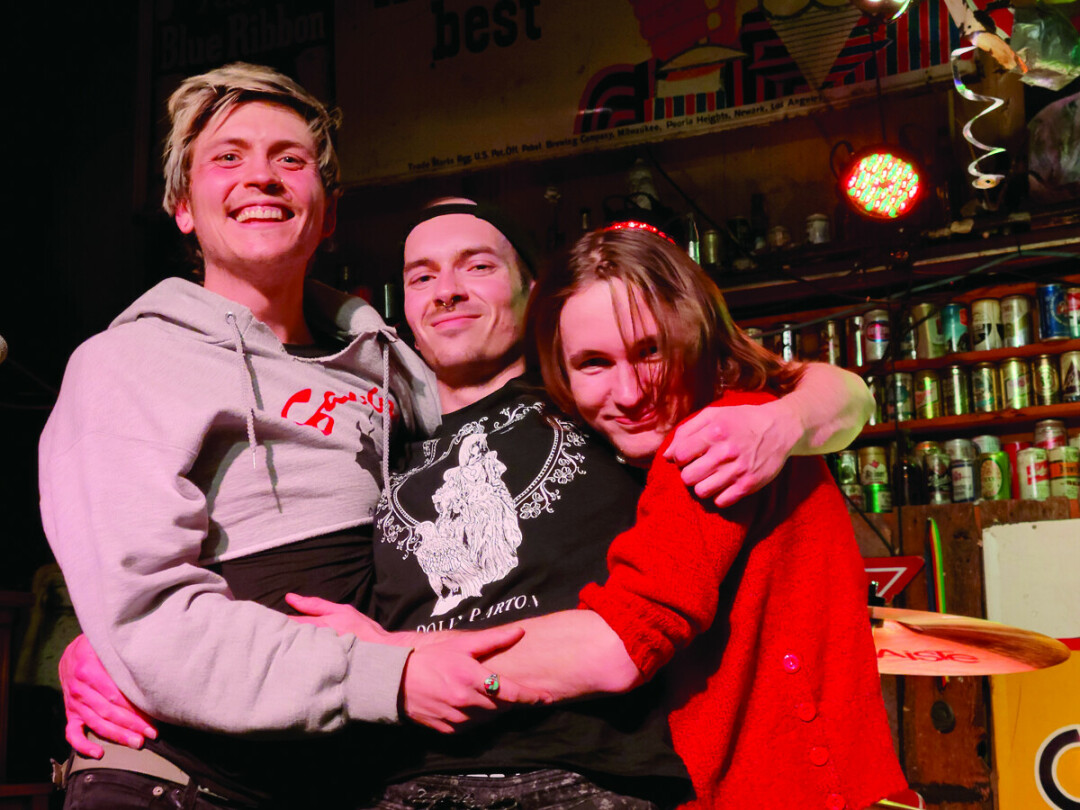 Three of the sweetest people you could ever meet have created one of the most intriguing, talent-filled, fun-to-watch Punk bands in Gallatin Valley’s music scene. Goochslam—you read that right—is comprised of Cooper Tedford on guitar and vocals, Har Larson on bass and vocals, and Luke Scheeler on the very fierce drums. Coming together in Bozeman the past couple years from different parts of the country (Luke closest to home, from Laurel; Har from Nebraska, and Cooper from the East Coast), open mic nights and band tryouts in this small, tight knit music community birthed this rowdy, yet so lovable surfer/rock/punk band.

We had the chance to sit down with them before the sound check for Twin Void Live, playing at the Filling Station with Goochslam and Conductor in April, to chat, giggle, and get a little more acquainted with this Trio of Talent, these Princes of Punk.

Missy Glenn: What brought you guys together?

Har: Cooper was drumming for me in a band that I was playing guitar in, and I said I liked Cooper’s music more than mine, in that it’s amazing anyway, and that I wanted to play his music.

Coop: I started listening to the Stooges and groups like that, classic along with some modern rock, and decided I wanted to just go for it.

MG: So, lots of punk influences. How about you guys (Har and Luke)? What are some influences you’re drawing from when you’re playing?

Luke: I like a lot of classic drummers like Ginger Baker and John Bonham. I want to try to keep things simple. I don’t usually keep them that simple, but I like to keep it punchy. That’s kind of what I work with.

Har: Right around the time of getting with these guys, I had just transitioned to bass from guitar, but I listened to a lot of jazz, actually. So I listen to a lot of stand up bassists. I play a lot of runs like that. So, I mean, there’s a lot of just, like, mocking bassists.

MG: Have you gone out of town for any gigs?

Coop: You know, we mostly play at The Filler.

MG: Can people book you for parties? How often do you plan on playing?

Har: We’ve been playing a lot here (the Filling Station) because I feel like Pat [Lokken] just keeps asking us to come back. But yeah, I feel like we play two or three times a month. [At least] that’s been the norm this year. I know that we have a little trip down to Salt Lake next month. But I’m sure we’ll play a couple times before then.

MG: Salt Lake? What’s that for?

Har: Kind of a funny story (gestures at Coop); “you should tell.”

Coop: We were playing a barbecue at the Lux. So this group of cyclists rode by and they all had, like, crazy hair. And they stopped, buying and drinking beer and listening to us; they actually camped out underneath the trees. And then they followed us on Instagram and asked us to come play a show down in Salt Lake City. They’re like—they’re anti-car.

MG: And you guys had the opportunity to play for the Gallatin Underground. How did that come about? How was that?

Luke: Vince [Palafox] invited us, and we rarely say no to anything, but it was actually really great!

Har: I feel like we’ve played pretty good. I’d be pretty fair. All the vocals. Yeah, we kind of look back on it like, ‘whatever.’ But I had a lot of fun, too. I felt good about it. It was one of our first times being able to watch and hear back at a pretty professional quality. Before that, we had recorded ourselves with some microphones or whatever, but it was never like we seriously tried. So to have somebody seriously try to make us sound good, it was kind of cool to hear back. I feel like that was one of our first times having that happen.

MG: It’s cool to see that you guys kind of hit all different age groups, too. I feel like punk is really great for that—if you have that punk in your heart, then no matter what age you are, you’re gonna show up for some good music. Are you guys working on an album?

Har: We’re gonna record some music, but we’re undetermined if we want to do that in an album format or just add some singles. I think we’re just gonna press a record and see what happens.

Luke: Figure it out later.

Har: We’ve tried a couple of times and the times that we tried were like, Yeah, we’re not gonna release this content. It hasn’t been up to our standard, but I feel like we’re ready to graduate a lot of these songs into people being able to listen to them all the time.

MG: How many do you think you’ve written?

Coop: Thirteen or fourteen—definitely an album’s worth. (He would know, since he writes all the songs!)

Luke: Yeah, you know, as we record, we hear things and then we make adjustments. I mean, that’s happened the last couple of times—for me, at least, when we record. Like, at the end of it, we’re way better than before we started, recording to play the song over and over right.

MG: Will you go to a studio or will it happen at home?

Luke: We’ll probably record it at my studio. (Luke works at Jereco Studios in Bozeman.)

Har: We’re excited for it!

Luke: It makes things a lot easier to practice, there in the studio. Easy to set up the mics and hit record. Practice and see what happens, where the music takes us.

MG: Oh, and did your name come from Gooch Hill, like the road?

Coop: (Laughing) Sure, sure.

MG: It kind of sounds a little sexual. And then there’s also, like, the spiciness of it.

Coop: (Giggling) I will clear up that. Gooch is the place between balls and butthole.

Har: When guys are slammed, it’s typically like on a skateboard or something. And you can imagine what that means. OUCH! Someone just asked me today what our plan was as a band. And my immediate response was; “we’re just having a jam, so there’s only up, and I’m just having a good time.”

Luke: I think we just started it for fun, and it’s stayed that way.

Har: I happen to love you guys. We all love each other.

Coop: The relationship between the three of us is really good. 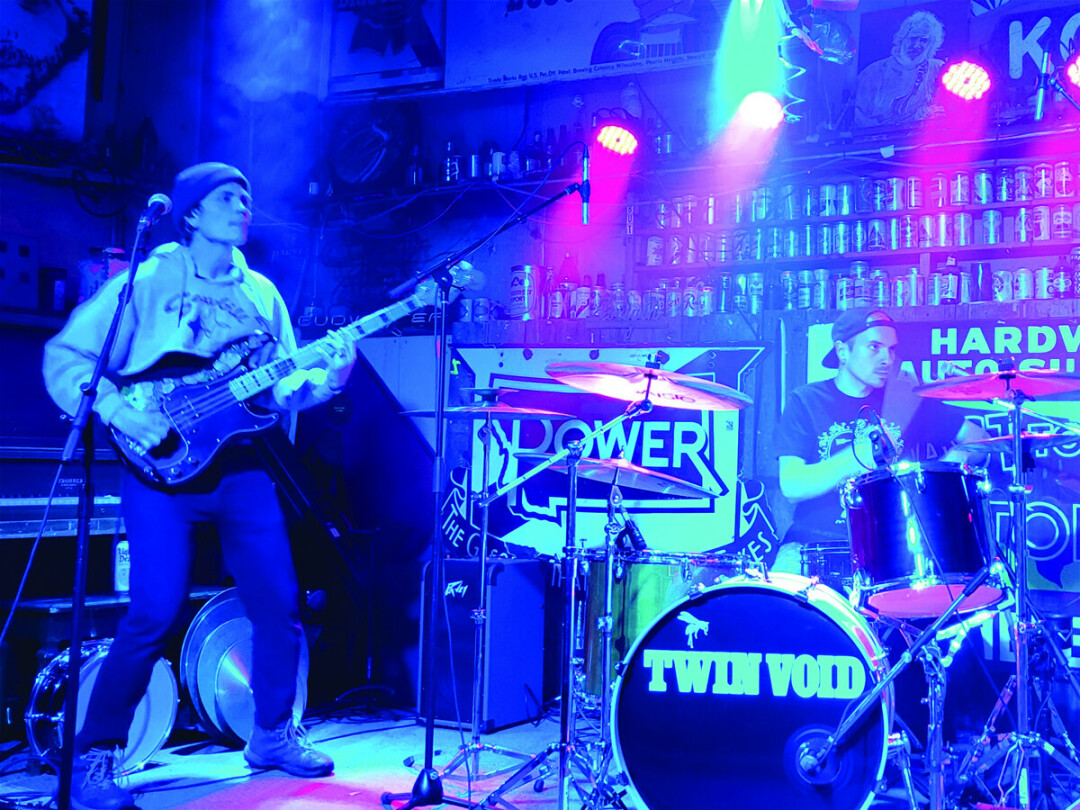 MG: Do you guys have other projects outside of Goochslam?

Coop: Har and I are in Hot Milk and the Flower Pallets together, where I drum, and Har plays bass. That band is like instrumental rock opera.

MG: (I was warned that the guys might get down to their underwear during the show, which didn’t happen, but often does, from what I understand), and Cooper wanted to know if those pictures would still be ok for the article.) Any PR is good PR, is what they say.

Har: We have been running a Tinder campaign specifically for Goochslam.

Coop: Yeah, people can still find us on Tinder.

Har: Okay, people show up to gigs. Yes, they saw us on Tinder.

Coop: And then they won’t leave us alone—like, “I showed up, somebody’s got to put out.”

Luke: Not on OnlyFans yet.

Watch for these up-and-coming, self-described DIY experimental surf rockers—not only are they a riot to hang out with, super lovey and sweet to each other and their fans, they also put on attention-demanding, gender-bending, face-melting performances! Find and follow them on Facebook, TikTok, Instagram, swipe right on Tinder and regularly see them in action at the Haufbrau and The Filling Station. People can absolutely book Goochslam for parties, events, and other venues! Find their Instagram at @goochslam and send them a DM.