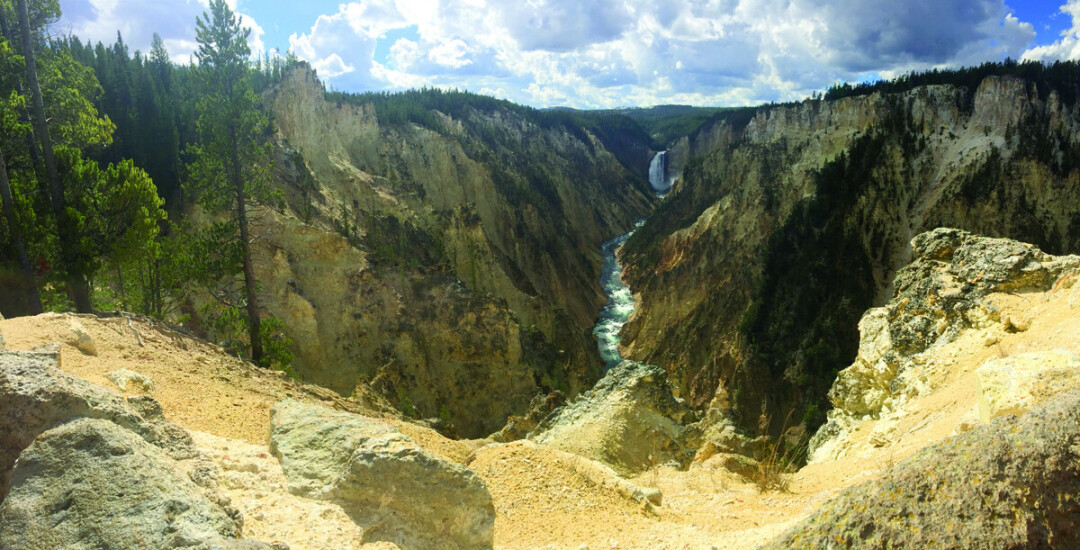 I was excited when I heard that the theme of this month’s issue of Bozeman Magazine would be the 150th anniversary of Yellowstone National Park. The first national park in the world—America’s best idea. Here was a topic I knew something about, one I could really tear into. But soon I was dazed and confused. This was like the grade school assignment “What I did on my summer vacation.” How would it be possible to narrow this topic down, to even begin to cover it?

I took my first trip to Yellowstone when the Park was 90 years old. On my next visit, it was 101. Since then I have been to the Park every year—in some years dozens of times. I have camped, hiked, climbed, kayaked, canoed, fished, and skied. I have been a tourist and a worker. In my job I have driven through the Park hundreds of times in every month and season, seen every type of animal, and walked every geyser basin. I was an expert; I just needed to focus and write. Right? Oh my, no. In 60 years I had barely begun to experience all the wonders of Yellowstone. A bucket list never works for me, because each trip inspires new ones. For me, it is simply The Park. I hope to keep going there.

Since so many of my trips were for work, a sales route of long loop full-day drives to several locations within the Park, I never felt that I actually belonged. Many of the people I knew in the general stores and the hotels lived there in dorms and cabins or RVs. They resided for months, the whole season. My longest stay has been a week in the backcountry on Yellowstone Lake. Then I realized that they felt the same. From the person in Livingston who told me she had been to Yellowstone once as a kid and once as an adult, and that was enough, to someone who lived an entire lifetime in Gardiner and went every day, all of us are visitors.

Yellowstone is wilderness. Millions of acres of wilderness. It consists of a high plateau 8000 feet in elevation that is virtually inaccessible for half the year. The snowplows work continuously in April and give up in November. Any day can begin and end in brilliant sunshine, with violent thunderstorms and snow on the peaks during the hours between. The developed areas of the Park seem civilized, yet they are tiny, and there are long distances to travel. We are all visitors to this wilderness wonderland, and it feels that way.

This wilderness is subtle, then dramatic; commonplace, then spectacular; normal, then strange. Much of the Park is pine and fir forest, or expansive grassy meadows with creeks and rivers winding about. But driving through this regular Rocky Mountain scenery, you suddenly come upon the shore of the highest, largest lake in the country. Then there is one of the deepest canyons with yellow rock glowing in the sunshine. There are mysterious clouds of steam rising from unique and numerous hot springs, geysers, roaring vents, and bubbling mud pots. Around a curve in the road, there may well be a giant bison standing on the pavement, a herd of elk running, or a busy grizzly bear effortlessly turning over large rocks because he can.

We spend our leisure lives in a combination of watching and doing. It is possible to drive through Yellowstone Park and never leave your vehicle. There is much to see. Some people will do this and that is fine. I would not recommend it. It is not necessary for all of us to ride or hike on a long backcountry trip, but however you decide to experience the Park, take time. On one of my early work runs, I passed a tourist vehicle where I should not have. The ranger who saw me did not pull me over but followed me to my next stop. He knew that I was working and said that driving like that was a bad idea. I agreed and did not receive a ticket. That was not the best part. He told me that it was only early June and a long season was before all of us. He said to slow down and enjoy it. I never forgot that advice. Sure, I became frustrated with people who came to Yellowstone but left their brains at home, yet I always tried to enjoy the ride, the day, and yes, the privilege of being in Yellowstone.

Having said that, there are around four million visitors to Yellowstone Park each year. They all seem to be there on August 6th. Finding a place to park at Artist Point at the Canyon or a seat on a bench at Old Faithful on any summer afternoon is a challenge. Despite good intentions, a visit to the Park can become a race, a competition. My remedy for that is to find a small, lonely pullout, park, and walk off into the woods a hundred yards and sit on a rock or a stump for ten minutes. The subtle part as opposed to the dramatic. I did this on every trip to Yellowstone. Well, of course, I didn’t, but I did it enough times that it became a habit, a good one. I thought and listened. The birds sang and so did the breeze in the tops of the pines.

Last month I spent a couple of days in the Park. Call it my anniversary trip. The season was early. It was chilly and there were piles of old snow towering everywhere. There were not many people on the boardwalk for an eruption of Old Faithful and five minutes afterward there were just two of us. I strolled over to the other guy and heard him talking. Figured he was on the phone, so I walked on. He called me back and told me he was talking to a raven. He was sitting, waiting for another eruption so that he could compare them. We chatted, then he went back to the ravens. This guy needed no tips from me on how to experience Yellowstone Park. 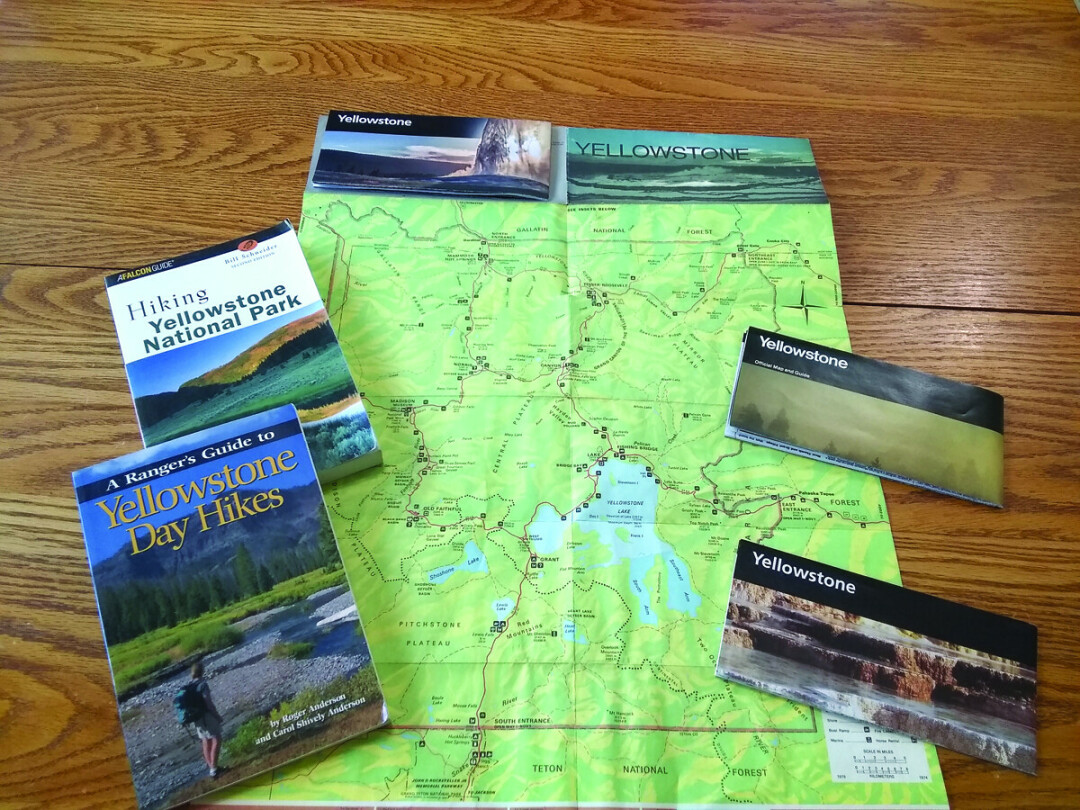 Looking back over 150 years, it is worth noting that when Yellowstone, the first National Park, was established in 1872, no one really knew what that meant. The people who had some idea what the Park should be were nowhere near the Wyoming and Montana territories where the Park was located. Those areas were not yet states and were sparsely populated. In the early years, poaching and vandalism were rampant. In 1886, the US Army took over administration of Yellowstone and kept order. The National Park Service was established in 1916.

The mission statement of the Park Service says that they will preserve unimpaired the natural and cultural resources of the parks. It also says that the parks are for the benefit and enjoyment of the people. At times there have been conflicts between these two objectives. The Yellowstone website has information about lodging, restaurants, service stations, and Wi-Fi. The existence of any of these things within the Park has surely impaired the natural resources to some small extent. Yet some of this is necessary for enjoyment. A balance has been found and, thanks to the dedication of the Park employees, it works. It is a really good idea when interacting with the people who work in Yellowstone while inquiring about where the bathroom is located or the time the will geyser go off, to thank them for their efforts. They will be surprised and appreciative.

Years ago while on my sales route through the Park, I stopped in a pullout on the shore of Yellowstone Lake. I walked down to the beach, sat on a rock, and had lunch. I gazed across the huge lake to the peaks on the opposite shore and wondered what the hiking would be like over there. I checked the height of the waves on the lake, hoping to launch a kayak someday. I scanned the sky for storm clouds and peered down the lake into unknown coves and arms. Too soon, I packed up and resumed my drive. Later, I discovered that I had left my pocket knife on the beach after slicing an apple. The next week I went back to look for it. It was not there and has never been there since in all of the times I have stopped and walked the beach. But everything else on that lakeshore remains.