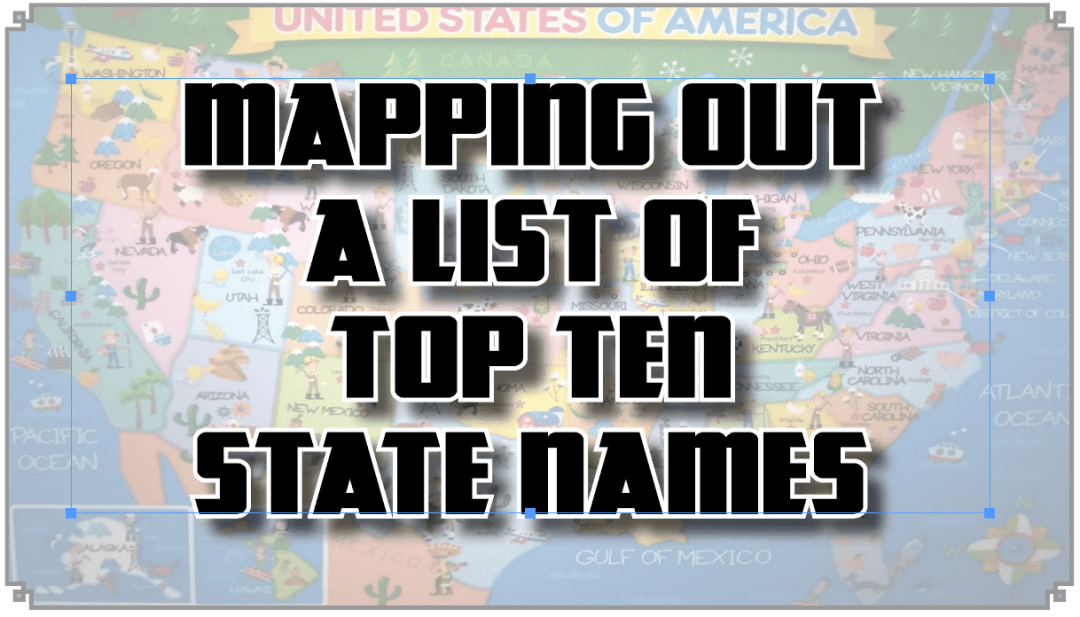 As school children, we were required to memorize the names of the 50 states that make up the United States. We were also required to memorize the names of all state capital cities. That adds up to 100 names to memorize—no wonder I found grade school traumatic! Plus, I am old enough that, during the process, the total number of states had increased from 48. For all I knew, more would randomly be added to the list over the years, making the task never-ending. That did not happen and, once the task of memorization was complete, it provided a badge of knowledge that could not be questioned. Sometimes there was even superiority when adults, being rusty on the subject, could not recall the names of cities that were fresh and bright for us.

As time went on, all of these names became places in our minds. Maps were introduced with the states in a rainbow of colors. Their names and the names of the capitals were included. Little icons were drawn that indicated the products each state was famous for, such as cornstalks and oil wells, smokestacks and apple trees. There were regions made up of adjoining states; the Midwest, South, Far West, New England. There were borders of rivers or mountain ranges, sometimes simply straight lines. A few states were so small that their names and product information was located out in the ocean, with arrows pointing toward their tiny spaces. Especially in the west, the shapes of the states were square or rectangular, making you wonder who had determined their boundaries.

The inclusion of Alaska and Hawaii in 1959 created issues for the mapmakers. The former was far to the north and the latter far to the west of the contiguous 48 states. The maps showed them off to the side as kind of an afterthought. Hawaii is usually drawn as bigger than it actually is, and Alaska as much smaller. The Hawaiian Islands are about the size of Massachusetts, but stretch for 1500 miles. Alaska is huge, bigger in area than the next three largest states combined. This can hardly be portrayed on a single page.

In all of the geography, history, economics, and even climate, one thing that was rarely discussed or studied was the origin of the names of the states. The exception to this was the thirteen original colonies. Most of them were named for places or people in Europe, sometimes to secure funds for their founding. King Charles I of England scored two states, the Carolinas; his wife, Henrietta Maria accounted for Maryland and possibly Maine, though that appears unlikely. The “News” — York, Jersey, Hampshire — have obvious origins. Just two of the thirteen had native names; Massachusetts and Connecticut. From Columbus to Wounded Knee, up to the present day, relations between European Americans and Native Americans have been tragic. Centuries have passed in, at best, cultural misunderstanding, at worst, outright genocide against the Native population. It seems an irony that half of the 50 state names are Native American in origin. Stretching back for millennia, Native influence on the land has become a permanent part of our political and cultural identity.

However, these names and many others seem to be incidental, even accidental, rather than an intentional choice. Once again, maps are involved. Names of areas and territories on maps became colloquial and entered general use. Many times these early terms became our state names. Some of these made sense—Louisiana, for example. The state was named after one small area of the vast territory that the French explorer LaSalle dedicated to the French King, Louis XIV. Other map entries did not make much sense. Idaho comes from a word that a territorial representative claimed was Shoshone. He later said he had simply made up the word. It made the map and was kept there.

Congress decided all of this. At times it was messy, congressional. There were failures. At least four areas were proposed to be named Jefferson. Never happened. The Mormon Church wanted a state named Deseret that would have covered most of the west. They got Utah. The weirdest was in 1861, when the Confederate-sympathizing mayor of New York City proposed the secession of the Bronx, Manhattan, and Staten Island be called Tri-insula.

All of the stories concerning the naming of the states are interesting; some are fascinating. It would be a fun exercise to make a list of the best of these names: the best sounding, the most appropriate. A top ten ranking. This would, of course, be completely objective.

10. Colorado
This Spanish word means “colored red.” The state was named for the territory, and it is thought that the territory name came from the Colorado River. But at the time, the river was called the Grand and flowed into the Green River in Utah. Colorado City has taken credit for the lobbying effort that resulted in the state’s name.

9. Arizona
This is a Spanish spelling of an O’odham word, Ali sonak, meaning “little spring.” The Navajo spelling is Hoozdo Hahoodzo. The area referenced was located near a Sonoran silver mining camp. Arizona was the last of the 48 contiguous states to be admitted to the Union. This admission occurred in 1912, along with that of New Mexico.

8. Michigan
The word comes from the Ojibwe, meaning “large water.” The name is appropriate, since the state consists of two peninsulas that together are bounded by four of the five Great lakes: Superior, Michigan, Huron, and Erie. The area, especially around Detroit, was at various times Native American, French, British, and part of Canada before becoming a U.S. territory, then a state in 1837.

7. Vermont
The name comes from the French explorer Samuel de Champlain; in French it means “Green Mountain.” I can’t be the only person who once thought that Vermont was one of the original thirteen states. This area was another that was variously controlled by Native Americans, French Canadians, and the British. Later, New York, New Hampshire, and Connecticut attempted to lay claim, until the territory declared its independence. It later became the fourteenth state.

6. Hawaii
The name comes either from a legendary figure who is said to have discovered the islands, or from a Polynesian word for homeland. Formerly an independent country with a monarchy, the islands were annexed by the U.S. during a burst of imperialism in 1898.

5. California
The first Spanish explorers reached California in 1542. The name likely comes from a fictional work popular in Spain earlier in that century. The fantasy land of California was ruled by Queen Calafia and was populated by Amazon women. The Baja peninsula was lower California and the northern mainland was called Upper or Alta California.

4. Dakota
Both states, North and South, are named for the Dakota or Lakota Sioux who historically inhabited the area, and who continue to have a significant presence. There have been suggestions over the years for one or the other state to drop the geographic prefix as long as the other retained theirs. So far this has not happened.

3. Nevada
The name comes from the Sierra Nevada range, translated from Spanish as “snow covered mountains.” The mountain range lies almost entirely in California, though Nevada does have 13,000 foot mountains on both its western and eastern borders. It is possible that the word was closest on the map when the territory was separated from Utah in 1861.

2. Alaska
The name is a Russian derivative of an Aluet word that means both “mainland” and the “great land.” This seems fitting, since just about everything in Alaska is great, as in large. Mountains, glaciers, the seacoast, the tundra. A map of Alaska overlaid on a map of the lower 48 states covers just about everything from Atlantic to Pacific.

1. Montana of course
The name comes from the Spanish for mountain or mountainous. Montana del Norte was the name Spanish explorers gave to the Rocky Mountain area. The territory, and later, the state name was decided by Congress, after some argument. This one they got right. Some would say that not all of the state is mountainous. Well, the Pryors are mountains, as are the Little Rockies. The Sweetgrass Hills would be called mountains in a lot of places. Eastern Montana is defined by two of the greatest rivers in the country—the Missouri and the Yellowstone. Their sources are west, in the mountains. They flow downhill, providing the connection between the high country and the Great Plains. It all fits together. Montana.

*All of the information presented was sourced from Wikipedia entries or from official State websites. The top ten rankings came from extensive polling of more than one person. Mostly.