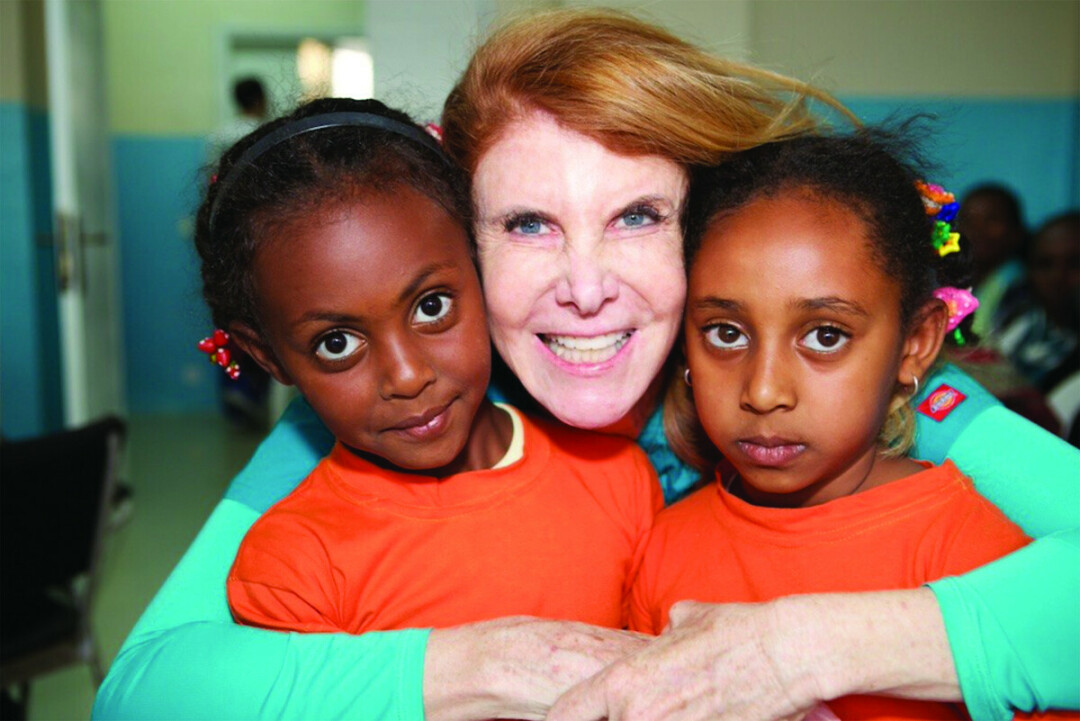 If you had the choice, would you participate in a health screening that could potentially save your life? Many probably would, and yet it may be shocking to learn that according to the World Health Organization, cervical cancer rests as the fourth most common cancer in women, with a whopping 570,000 women diagnosed with the disease, and 311,000 deaths worldwide in 2018. If cervical cancer is preventable, what’s making it so widespread and persistent?

For Cervical Cancer Awareness Month, I spoke with Dr. Patricia Gordon, a well-known Big Sky Philanthropist nominated as a Top Ten CNN Hero of 2021, and founding director of CureCervicalCancer, an organization committed to raising awareness about the disease, and providing resources to combat it in resource-poor countries. I conversed with her to learn more about why cervical cancer has remained an epidemic, and how her work can actively save thousands of women’s lives.

Gordon’s involvement began with a successful career as a radiation oncologist, but also from a deeper passion driving her to help as many patients as possible. When asked about how CureCervicalCancer first started, she explained the story, and how her experience abroad would ultimately shape the mission of her organization:

“I was a radiation oncologist in Los Angeles for twenty-seven years, and I wanted to do something more, you know, something different—something on a global basis. I tried a few different things and nothing seemed to fit, and then—lo and behold—one day I got an email from a bunch of radiation oncologists who wanted to put in a radiation machine in Dakar, Senegal. So, in reading about this, I discovered that—wow, the leading cause of death for women, cancer-related, was breast cancer and cervical cancer. Well, how could that be? Cervical cancer? This was ten years ago. I was very confused, and then I started reading more about cervical cancer and learned that it was the second leading cause of death for women in resource poor countries, and 350,000 women die every year from a disease that’s almost a hundred percent preventable.”

With newfound interest around the cause of such astonishing figures, Gordon arranged her own screenings for Human papillomavirus (HPV)—the group of viruses responsible for creating precancerous cells—bringing along five hundred speculum for examinations, and traveling an hour-and-a-half with her group to a remote, rural hospital in Dakar. They found themselves running a wildly successful operation, with fifty women waiting in line to determine if they were at risk for cervical cancer. Reactions to the screening were so overwhelmingly positive that Gordon’s group of peers stated that she just had to do it for the rest of her life.

After returning home and consulting with a supportive husband, the answer was clear: she would leave her practice and devote herself to addressing the global epidemic of cervical cancer that torments impoverished countries. Assembling a team of doctors from Los Angeles, Gordon established her initial “See and Treat” clinics in Kenya and Northern Ethiopia—teaching volunteers how to screen for HPV. Finding that trained healthcare workers became so skilled in their examinations, she felt it was necessary to leave the equipment they had brought along to ensure that areas they visited remained well-supplied.

As successful as their screening efforts were, a new problem of treating those diagnosed with HPV began to emerge. It was all well and good to help residents identify whether treatment would even be necessary, but Gordon found herself with a unique challenge—to teach volunteer nurses how to identify the virus, and also continue helping to provide treatment, even after her team had departed. Gordon explains the organization’s solution, which began to emerge as more clinics were established abroad, allowing for local institutions to help administrate the treatment process:

“For our group to go over there and screen five hundred women, and treat fifty of them—then take our equipment and come home—it was cruel. And, I didn’t know that at first. At first, on my very first venture out with cryotherapy guns—which are expensive, they’re, you know, 2,500 dollars—I thought that’s exactly what I would do: I would take the supplies back with me. But, on the fourth day of training in the Tigray region of Northern Ethiopia, I had a referral hospital. The nurses, Sarah and Skye—who by the way are still there, we’ve been back three or four times to upgrade their equipment—were doing the procedure so much better than I, that it was just impossible to take the machines back! So, I went to this big, giant hospital, went to the CEO and I said; ‘You know, you’ve been down to the clinic, you’ve seen what’s going on. If I leave the equipment, will you write to me, every month, the number of women screened and the number of women treated so that I can keep track of it, and keep an ongoing relationship? And, I’ll leave them the equipment.’ He said yes, and to this day we get correspondence.”

Not only has Gordon’s organization worked to spread their effective “See and Treat” screening model across eight different countries, but they are actively working to expand and evolve their services as well. Constantly working to improve the methods and tools to provide healthcare to rural areas, CureCervicalCancer has begun implementing practices to meet resource-poor countries’ healthcare needs by making screening more mobile. Gordon argues that simply attending screenings is one of the most important preventative steps to squelch the cancer’s development, and mobile testing vans further support their versatility. Is screening really so critical?

“Unequivocally. You know, I was just doing some reading earlier this morning: 80% of women who develop cervical cancer globally have never been screened, simply because they don’t have access. So, we’ve pivoted from the standard “See and Treat” model that was really emphasized; now, we are—I believe—the first ever organization to have a mobile, HPV/DNA testing van. And so, what we do now is screen and treat women using HPV/DNA tests… let’s go back just a little bit so that everybody can understand that HPV causes cervical cancer. The Human papillomavirus causes cervical cancer. That’s really incredible, because as an oncologist, I really don’t know any other virus that causes cancer… if it’s there for more than a year, it can cause cellular changes on the cervix, that then become precancerous, and will lead to cervical cancer. And, it takes a really long time for the HPV to cause cervical cancer: often ten years, which is truly in our benefit, because if we intervene, and screen a woman (now we use the HPV/DNA test), if they have HPV—anytime, up to seven-to-ten years, we can then offer them, right there, treatment. We don’t even use cryotherapy anymore, we use a little tiny gun that’s called a thermal coagulator: it takes thirty seconds, and it’s pretty much painless. The woman is treated for pre-cervical cancer, and she doesn’t have to come back—she’s pretty much done. She comes back for follow up treatments, and follow up visits, and that’s pretty much it.”

With the success of “See and Treat” clinics being established in many resource-poor countries, and the organization’s mobile testing van exhibiting exciting promise to continue making rural healthcare accessible, Gordon keeps working towards what she’d like to see come next for CureCervicalCancer. Because of the profound range that mobile screening clinics offer to help combat this cancer, she is seeking out support for her organization to continue helping others, and hopes to continue expanding the service that has already made such a positive impact on countless lives.

“This [HPV screening] van goes out two-to-three times a week: sometimes the CureCervicalCancer team is there, and sometimes we’re not. It runs without us, and it goes to these unbelievable [places]—these locations that you can’t imagine that we’re bringing healthcare to—in the middle of nowhere. So, my dream, now that we’ve kind of met the first dream, would be to replicate this; to get other mobile HPV vans going in other areas of Kenya first, and then to spread out to Tanzania, where we already have our standard “See and Treat” clinics, and, to go to Uganda, where we also collaborate with stakeholders. I’d like to have mobile vans in those three countries in the next three-to-five years. We’re a small organization, and each of these HPV tests costs about five dollars, so a fifty dollar donation buys ten kits, and that’s ten women who can be screened, and potentially of those ten women, a couple of them—their lives would be saved. So, a pretty big bang for your buck.”

Through the efforts of Gordon and CureCervicalCancer, it’s truly exciting to see the impact that positive and selfless actions can have on the world around us. While the organization continues to strive towards creating accessible healthcare for those in dire need, they certainly don’t have to do it alone. If you would like to support the work that CureCervicalCancer does, please consider visiting their website, curecervicalcancer.org, and learning more about their ongoing missions.