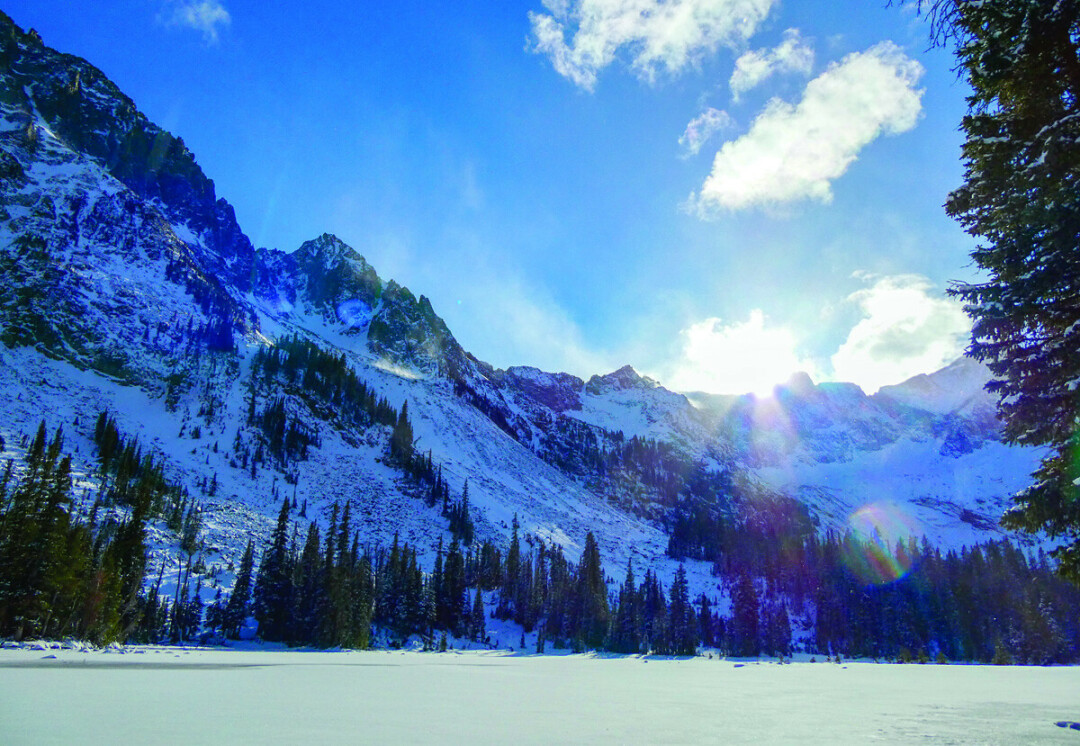 In early November my friend Liam and I went into the Crazy Mountains to hike to Blue Lake. Going into The Crazies was absolutely amazing! This mountain range appears after passing through the town of Big Timber. We took the freeway from Bozeman and, for about an hour there are no mountains around you, then The Crazies appear out of nowhere. They look out of place being surrounded by desert-type land, but that is the thing that makes them so beautiful and “crazy.” Looking at the mountain range as you’re driving into it is unbelievable. With the edges of the mountain peaks being so sharp and crisp, it looks as if you are staring at a painting. It is a gorgeous landscape and I would definitely go back, although I would probably go back being more prepared than I was the first time around.

It was not snowy in Bozeman, but being in the mountains was a whole different story. Since we were hiking to an alpine lake, we knew it would be cold, but we definitely did not dress for the amount of snow we ran into. I was wearing snow boots, light hiking pants, and a jacket. Liam was wearing river shoes, light hiking pants, a flannel shirt and a sweatshirt. As for gloves, all we had were liners, which were not great for keeping our hands warm. We definitely should have put on warmer clothes, and Liam would definitely have worn snow boots, but we pushed through and eventually made it to the lake.

The beginning of the hike was uphill, but not anything too crazy. First, we crossed over a bridge to get past the river, then it was a steady incline. The river was gorgeous and, looking up, we had a perfect view of the mountain peaks. Looking down, we had a great view of the lower mountains. Most of the incline beyond the bridge was shaded, so it got pretty cold. The snow also got deeper the further we hiked. Luckily, I had brought ‘yak-traks’ for the bottom of my shoes, but could not figure out how to put them on. The good thing is I had poles; unfortunately, one of them broke. Liam did not have either of those things. 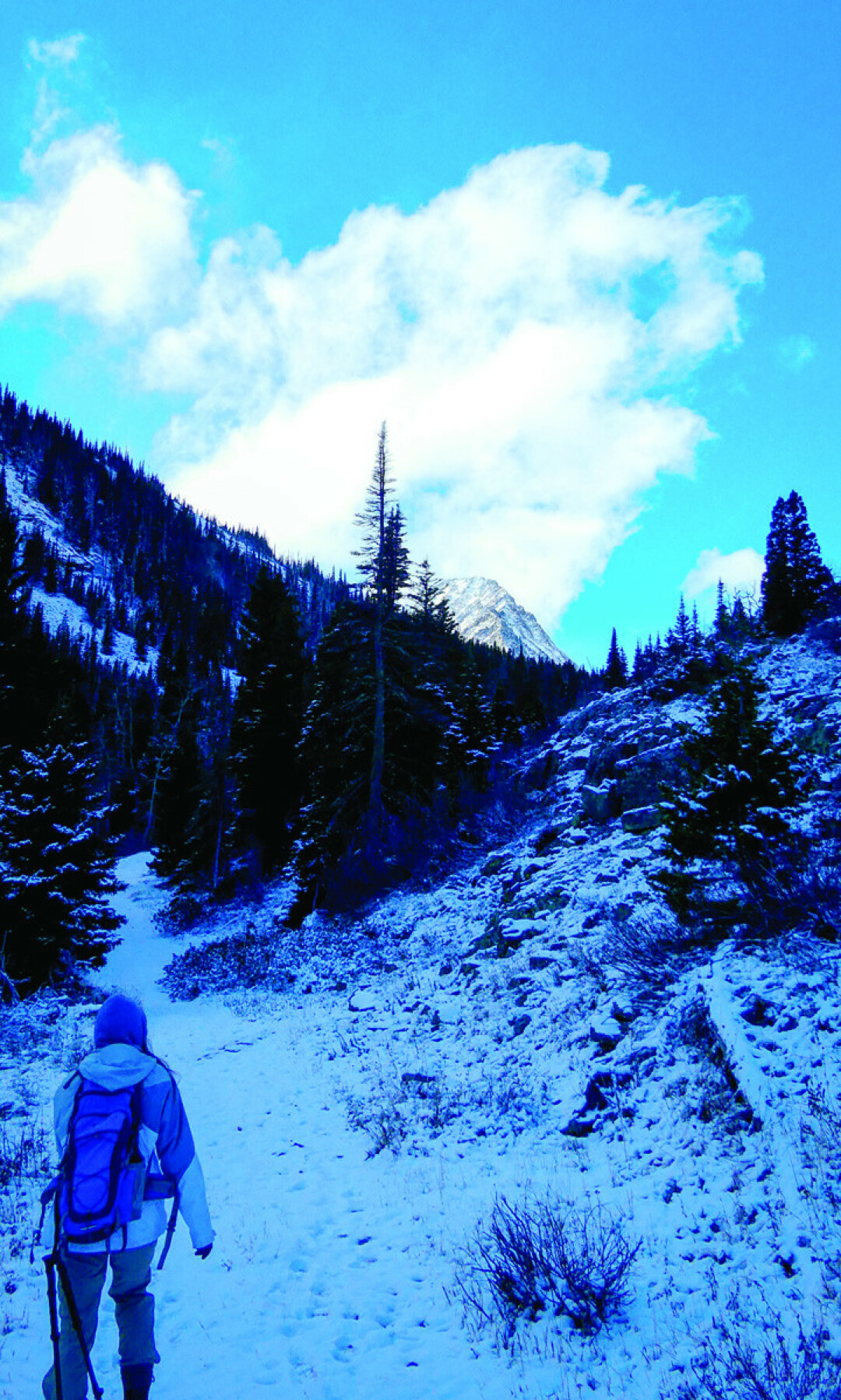 After ascending the hill there was another bridge that led us to the other side. Don’t get me wrong, the first bridge we crossed over had amazing views, but this one was incredible. The snow created a magical-looking river. All the rocks were slightly covered with snow, and the water moved into a mini waterfall flowing down the mountain. Above us, the sun was shining on a mountain peak, making it look golden. After walking all that way in the cold, we crossed the bridge and walked into an open area on the sun-filled side of the trail. A log served as the perfect bench, so we sat there and warmed up for a bit. Snow started falling and right in front of us was the amazing view of the mountains—this is the kind of thing I live for! In my mind, there is nothing greater than being outside of the city, away from the rat race, having nothing else matter but the trail in front of you.

As we continued up the trail, it flattened out, but the snow got deeper than we expected it to—even my snow boots were barely cutting it. It definitely would have made our lives easier if we had been wearing snowshoes. For a while we walked on this flat portion of the trail in silence, focused on staying warm, mindlessly picking up one foot after the other. Eventually, we saw some hikers up ahead and asked them if the lakes were close by. They said they had tried going and couldn’t actually make it all the way because the snow was bad. Did we turn back and stop because of that? No, we did not! We decided to keep hiking and at least attempt to go all the way. We eventually reached a split in the trail where you could keep going straight or take a left turn. The hikers we’d passed had told us to go left, so we did. Shortly after going left it seemed like we were going the wrong way, so we back-tracked and kept walking straight—which brought us right to Blue Lake. I kind of felt bad for those hikers that passed us; the reason they didn’t make it all the way to the Lake was because they had taken a wrong turn.

Towards the end of the hike, I had begun to wonder if we were ever going to make it to the Lake. In my mind, it felt like we’d been walking forever on this trail. It also didn’t help that Liam’s feet were freezing cold, and wet from all the snow getting inside his shoes. I asked if he wanted to go back, but he said he was fine, so we kept trekking along. Eventually, we made it out of the trees and into a valley where the sun was shining. It felt like a warm hug from Mother Nature. The only bad thing was that the snow was very deep in this valley. It was almost to my knees. For me, this wasn’t terrible, but it was not helping Liam’s problem. Walking through the valley, we could not see any lake in sight, but we stayed hopeful. There was no way there just wouldn’t be a lake, right?

Staying hopeful worked, because we ran into a sign that said, “Blue Lake Camping.” Seeing this put the biggest smile on my face. This hike had been a goal of mine ever since September, and now I was finally here. The circumstances might not have been perfect, but I was here and that’s all that mattered. Although this hike was more difficult with the snow, Liam and I both agreed that the snow made it ten times more beautiful. We went off the trail in the deep snow, making our way to the lake. Then we sat down with the cold air blowing around and took in the amazing view. In front of us was this snow-covered body of water and around us mountain peaks with the sun just barely above them. It created a perfect glow on mountains! I wanted to stay there longer, but Liam’s feet were not doing great. Not to mention, every time I took my hand out of my liner glove to grab another handful of trail mix it was FREEZING. So we made a mutual decision to make our way back down to the car. 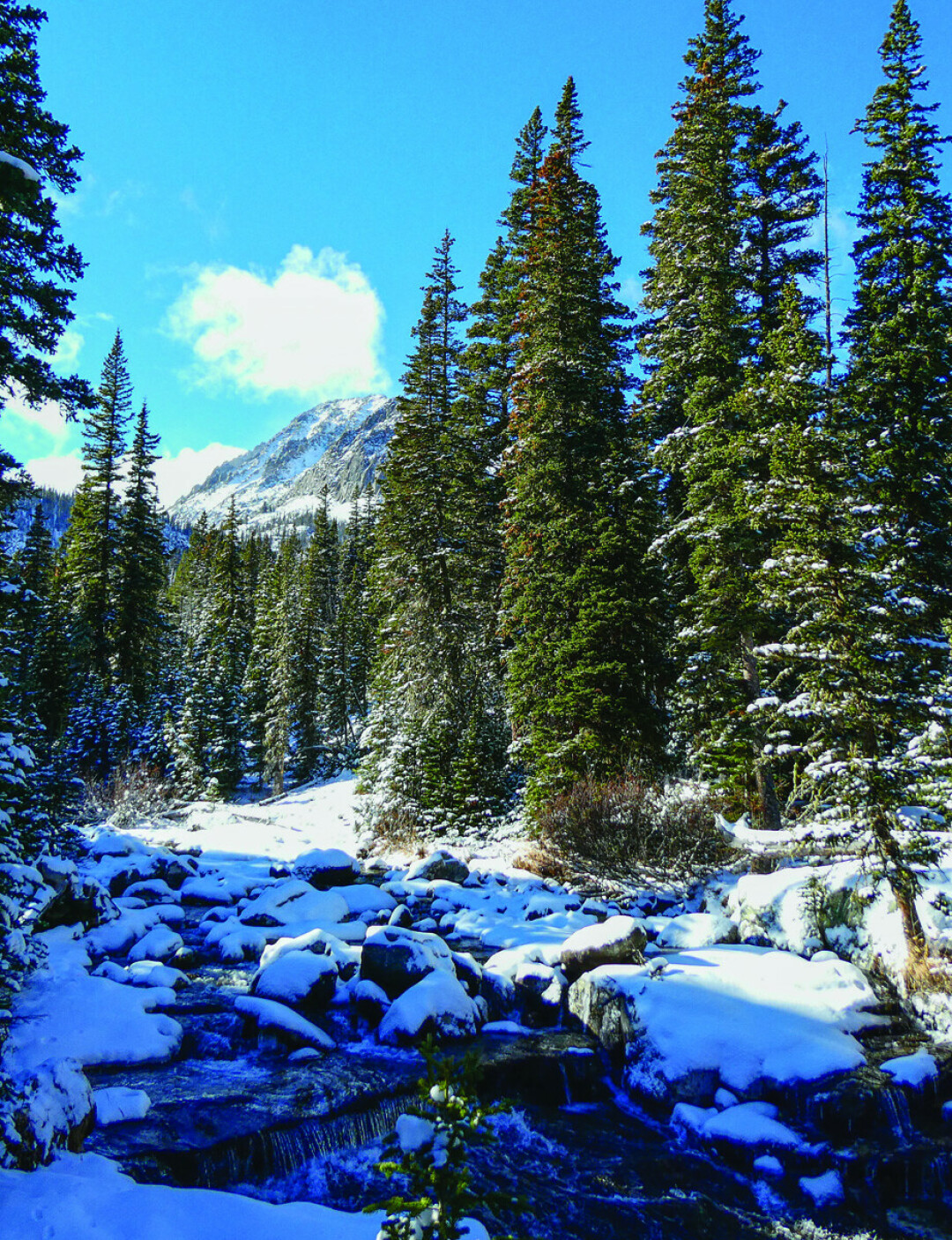 On our way down, we went much faster than we had on the way up, mainly because Liam’s feet were cold and wet, but also because I couldn’t feel my hands. Walking at the pace we were made the way down felt much shorter than the way up. Our bodies were on auto-pilot, mindlessly putting one foot in front of the other. About halfway down, the sun slowly began to set over the mountains to the right of us, and we stopped to take it all in. With the wind slightly moving the snow on the mountain tops and the sun hovering just above, the mountains looked like golden sparkles going through the sky. This was by far one of the prettiest sunsets I have ever seen!

By the time we made it back to the car, it was not completely dark, but it was getting pretty close. Before driving back, we sat in the car with the heat on full blast, doing all we could to get warm, which took a good ten minutes. As we drove away, we talked about how cool a hike it had been. Although it was challenging because of the snow, we definitely would go back and do it again with better gear. Another really cool time to go to Blue Lake would be summer. With how open the valley is by the lake, there would be plenty of spots to pitch a tent. Also, the hike was only 7.5 to 8 miles, not too long for an overnight trip. If we ever went back and did this in the snow again, I would definitely wear better gloves, Liam would wear snow boots, and it would probably be smart to have snowshoes.

As we drove back through the desert-like landscape, I glanced in the rearview mirror. Most of the time I am not someone who stops to take pictures, but what I saw was picture-worthy. The sun was setting over The Crazy mountain range. The snow was lightly blowing across the golden peaks and the sun was blinding, but I could not get myself to look away. I took my camera out and took a few pictures, because I wanted to remember this moment.

Maisie Bissell is a freshman at MSU majoring in writing and photography, who really enjoys the ability to share her work. She just recently moved to Bozeman from Washington and absolutely loves it here.