Amongst the isolation and tragedy of the past year and a half, music was halted in place - musical icons were lost to Covid-19, live music was put on pause, bands were disbanded, recording studios shut down; the music industry took a huge hit. Musicians were left to their own devices, alone in lockdown, trying to channel their talent into outlets able to support their families while still satiating their creative thirst.

One of these musicians is Madeline Hawthorne Kelly, age 32, a New England-born college-transplant that came to Bozeman to study Sustainable Food Systems at MSU 13 years ago. If you have lived in the Valley for any number of years, you’ve probably seen Maddie performing solo or with a couple of friends in a local brewery, at an event or wedding, or even on a bigger stage (like MAP Brewing, the Filling Station, the Ellen Theatre, Groovin’ on the Gallatin, Targhee Festival - the list is endless) with her and her sister Emma’s band, the Hawthorne Roots. Their sound is soulful and refreshing - think Fleetwood Mac meets The Be Good Tanyas meets Tracy Chapman. When Covid hit, the Hawthorne Roots found themselves separated within the same community - isolated, unable to practice or tour, nothing to do for the foreseen future.

So what was a girl to do? Madeline wasn’t going to let lockdown put a chokehold on her love for her craft, her birthright, her passion. She had left her non-profit chef coordinator job a few years back due to the fans and touring demand Hawthorne Roots was crushing, making music her full-time job. Maddie channeled all of her emotions - anger at the pandemic, sadness at the losses everyone was experiencing, the solitude of staying home, the joy that music allows her - into writing songs and developing music for her new solo album, “Boots!”, an EP with 10 songs Maddie wrote over the course of last year and recorded at Studio 110 in Pittsburgh, PA. I had the chance to sit down with Madeline a few weeks ago to talk a little about her family and history, and her new album. 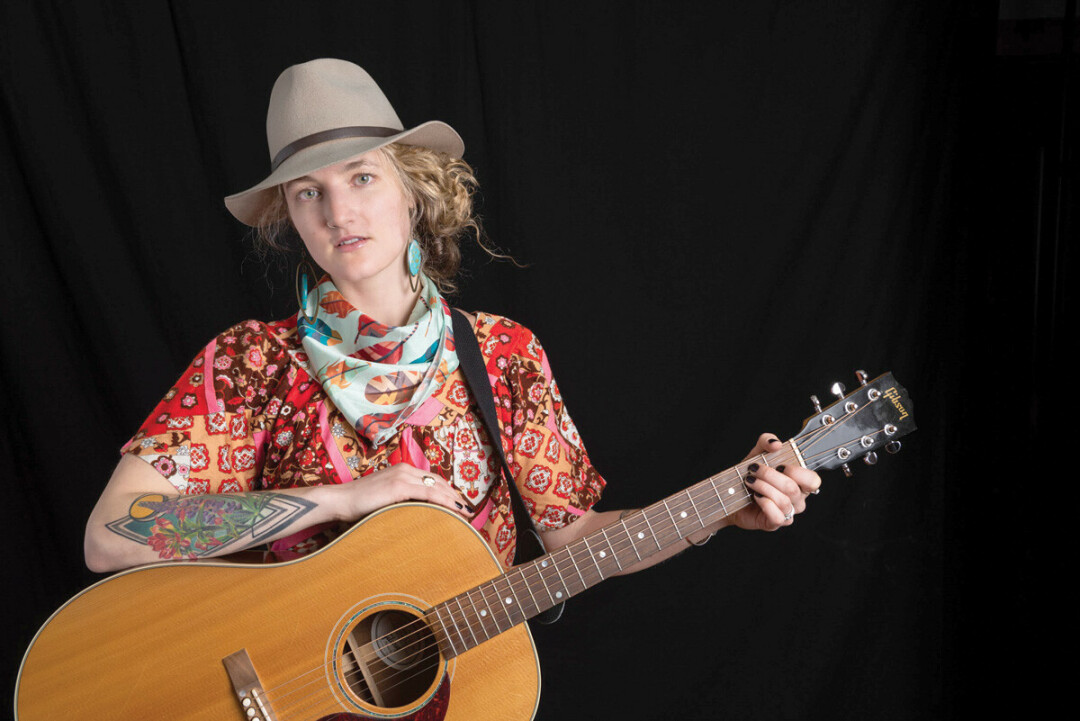 Madeline Hawthorne comes from a musical family; her mom was a classical performer, a vocalist. She went to the New England Conservatory of Music in Boston, where she met Maddie’s dad, a student at Berkley’s College of Music. It was kismet, and they started their family in Boston. After moving to New Hampshire for a new career opportunity for Mr. Hawthorne in Sustainability (his little apple didn’t fall far), the family settled there to raise their family, with music always being a huge part of the family’s daily lives and traditions. “[We are] very much rooted in music. I grew up singing in choir and always took music lessons. Yeah, so we were always singing together when we were younger.” Maddie started writing songs and music at 16 after receiving her first guitar, and moved to Bozeman at age 19.

After Maddie and Emma moved to Bozeman to attend school, it was absolutely natural that they start performing together. “She’d only been here like a year. So she would’ve been in her late 20s. I was in my mid 20s and it just kind of like, started. I mean, we started just playing around Bozeman and now we’ve kind of got the itch to go through places and work together. It was a lot of fun. We actually became so much closer during that time.”

That was about 8 years ago, and the band just snowballed with momentum since - recording EP’s, touring all over the Pacific Northwest and West, and winning Bozeman’s Best Of Music awards subsequently over 4 years, 2015 through 2018 and 2021’s Bozeman’s Choice Local Folk Performer(s). Managing, performing, promoting, and touring had become Maddie’s life, before Covid-19 brought all of that to a stop.

“The pandemic has definitely played a role in halting our momentum, which is so fun.” (Enter sarcastic eyeroll). “And so during that time, when we’re all locked down and can’t see each other anyway, I started working on my own material, right? That’s just kind of a natural progression. But you know, the pandemic, definitely played in pushing me that direction.

Well, and bringing everything else I was working on to a halt. So we’re left with - there’s no van, there’s no tour, no rehearsal. And so - time to write! I needed that as well - some time, and to just explore working with some different people and to just kind of keep finding my own voice.”

All of the songs on Madeline’s debut album were written by her, as census says debut albums should be. “And pretty much all of them were written during the lockdown period. So it’s been over a year since I kind of started the process. When I sat down after a long period of silence, you know - the band coming to a stop is pretty tough. Then, just after a while, I went in and just kind of wrote this kind of nonsense, blurb of like, word vomiting - all those fun feelings. And then took that and started to find songs through that. And then I kind of made a list from there and started writing.”

While this is Maddie’s solo album, she was in no way alone in producing, engineering, and bringing this album to life. Brad Parsons and Tyler Thompson were closer collaborators in the development of the project and seeing it through to finish.

“I’ve actually hired a producer for this record. His name is Brad Parsons. He’s a songwriter, and performer, touring artist and record producer, which is really cool. Because he’s thinking, empathizing, understanding - all aspects of what I’m doing. Because he’s been through all of it, not just one part. And Tyler’s been recording some, like 15 years, so it was really eye opening and educational again. I was grateful to have that experience.”

Maddie was in a new place, with new people, working harder than she ever had to be able to bring her album together. “I’d never been to Pittsburgh. And, you know, unfortunately, it was in November. And so, stuff was really closed, we didn’t go anywhere. Basically lived at the studio. I think I did two beer runs, grocery shopping, and that was it. For five days I was there.” But the things she did see, and the people she met were all amazing. 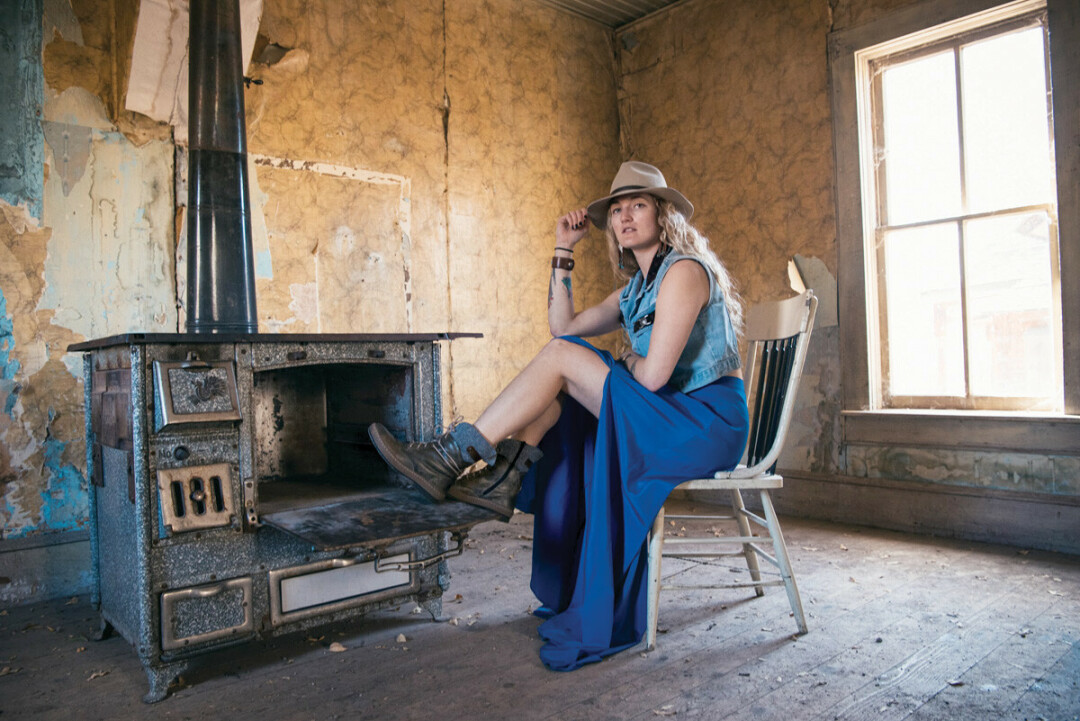 “So it’s all new players, people I hadn’t met before. And honestly, Brad’s a friend, but I didn’t know him very well. Since he and I started working together, he’s been super supportive. We’ve been on the phone every week, sometimes daily. So it’s been really great. Specifically working with the two of them to help guide me through because I’ve never really made it this far.”

Brad and Tyler helped bring together a band in Pittsburgh for Madeline to record with, and they got to work bringing Maddie’s musical vision to life. “Before I got to the studio, the version of the songs were acoustic guitar and vocals. You know, we really created the whole sound together.” However, the beauty of the album is how versatile it is. “The songs on the album are ones that you can just get your guitar and get up there and perform well, that’s the thing. So when I can tour with a band I will, but I can also play all these songs on my guitar.”

Getting a band together when you’re a solo artist during a pandemic isn’t easy, but rolling with the punches is something Maddie is a seasoned veteran at. So with the help of her dynamic duo, Brad and Tyler, and the band that came together during a worldwide crisis, the sound Madeline was trying to accomplish for her debut album was accomplished. “I’m heavily influenced by and very much enjoy Sheryl Crow as a songwriter, vocalist, lyricist. Her Grammy winning album - she did a lot of that herself. So we’re channeling a lot of that. So like, her record is pretty raw. Especially the new ones, and the way that it was recorded too, it doesn’t sound super polished, which is what we were specifically going for. And Tom Petty wildflowers album - again, you don’t hear a lot of reverb on his vocals. It’s not super polished - solid, but like more of a raw sound of the 90s.”

The theme of the songs on the album very much take Maddie back to her roots, showing how much depth and emotion she puts into her music. “I think it’s like a mix of what I was going through in my early 20’s. Not just emotionally but what I was experiencing, growing as a performer. I’m really exploring how far I could go with my vocals - it’s kind of bringing me back to some of the softer, more intimate songs that I started with when I was younger. Which is something I really liked about the record. It’s a cohesive piece that ebbs and flows. And, you know, I feel like that’s great for a debut, because it really shows the gambit of what and who you are.”

Earlier this year Madeline reached her Kickstarter goal to complete the album in just 9 days and wound up raising 118% of her funds! Madeline’s 10-song debut album is complete and while it is being pressed in vinyl and burned onto CDs she’ll be playing gigs locally and nearby. Catch her at Sawtooth Family Gathering Music Festival August 5-8, 2021 in Idaho, the band is flying out for that festival. Locally Maddie will be playing Aug 14 at Tips Up in Big Sky with a full band supported by Brad Parsons, Aug 19 at Rad Bikes Block Party with The Wild Sings, Aug 23 solo set at Red Tractor and Sept 17 at Ted’s Montana Grill solo.

To catch Madeline Hawthorne around the Valley this summer, visit her website where she updates her schedule often; you can find out more information about events, book Maddie as entertainment at an event, and sign up for alerts about her calendar via her website, www.madelinehawthorne.com/