Winters are long in Montana, especially when you grow up in the mountains at Silver Gate, Montana, like I did. For those with an artistic bent (I went to college for art), a long winter can be a joyous time for cozying up with your favorite crafts. There is nothing like a blizzard raging outside while you sit by the fire with your knitting needles making those last-minute Christmas gifts!

For many in the Gallatin Valley, arts and crafts have been a way of life. Today, there is the Bozeman Weavers Guild (ca. 1979) and the Gallatin Quilt Guild as well as the Southwest Montana Arts group (SMArts, ca. 1948). It seems those who create like to create in a community of sharing ideas and techniques. But how were people creating at the turn of the century? Were they gathering together or were they working on their projects individually? Looking at the artifacts in the collection of the Gallatin History Museum, one can glean information about those who were creating in the late 1800s through the 1920s and ‘30s. 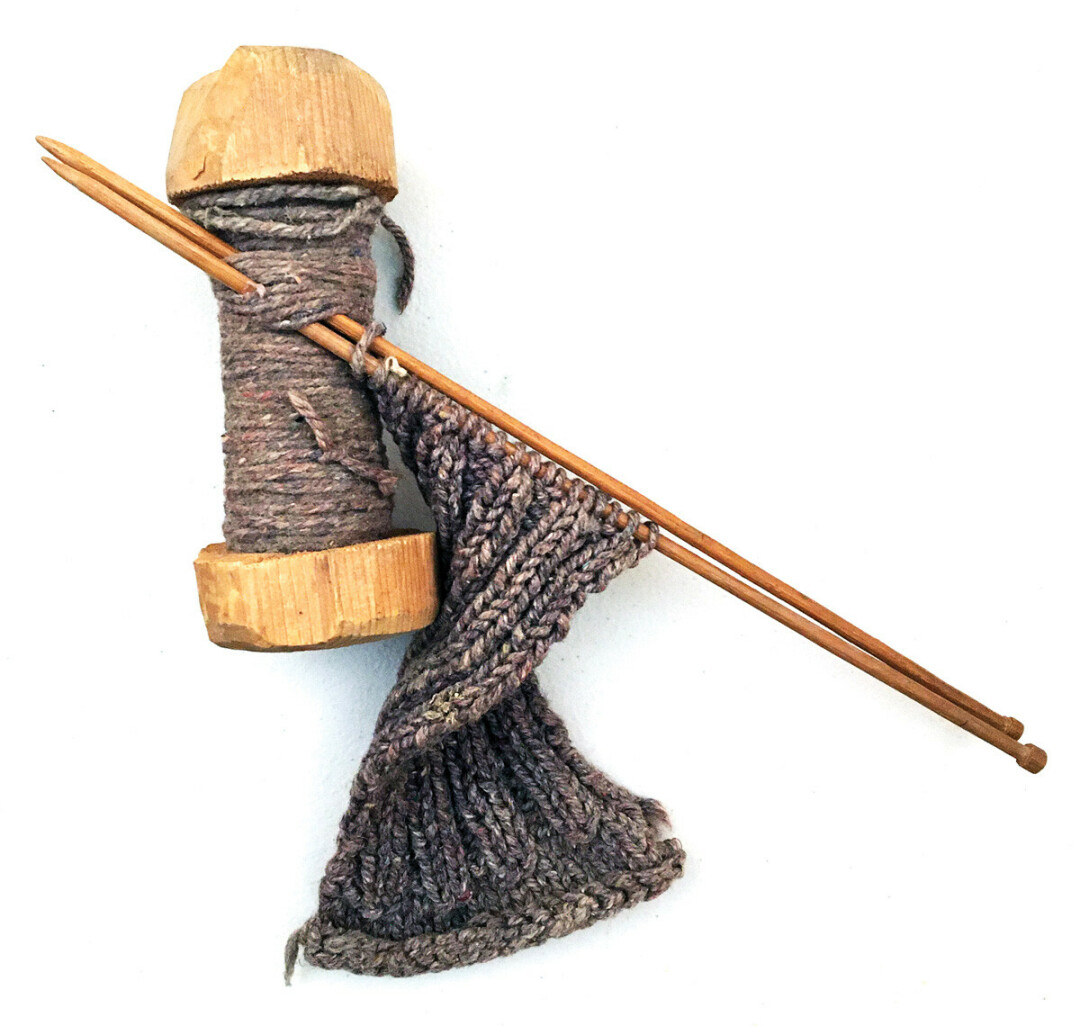 The oldest made quilt in the Museum’s collection dates from 1854, prior to the settlement of the Gallatin Valley. It was made by Hettie Martin Lewis, wife of John Shelvy Lewis who had come to Bozeman in 1912 at the age of 80 years old. The Lewis’ had originally lived in Kentucky, where they raised 11 children. While not a relic of the Gallatin Valley, per se, the quilts journey to the area shows its significance in the lives of the family. These things we create hold comfort.

In the 1930s, women working at the Local Pea Cannery created a Friendship Quilt each embroidering their names in a block. This idea of building community through craft has been carried on through the generations. In 2011, a Gallatin History Museum quilt was created, and in 2013-14 the Gallatin Quilt Guild created a “Moo-Tana Cow” quilt. The latter won two ribbons at the Big Sky Country State Fair in 2017 and was donated to the Museum the following year. These items were made in a community of creative individuals who came together to make one powerful product.

On July 8, 1983, an article appeared in the local paper about Margaret Post, “the Grandmother of weaving in Montana.” Margaret was the founder of the Bozeman Weavers Guild and taught hundreds of people the skill. That year, 1983, Margaret had woven three pairs of alter cloths for the First Presbyterian Church in memory of her husband which are still in use today, changing out with the seasons. She stated she had only sold a few pieces, almost all she had given away as gifts. Unfortunately, the Museum does not have an example of her work; however, the collection does have one piece we know was made here in Bozeman. It’s a white dish towel with a blue border hand woven by Irene Kyle. And much like the Lewis quilt, we also have a woven shawl that was brought over from Scotland to America as a comfort. 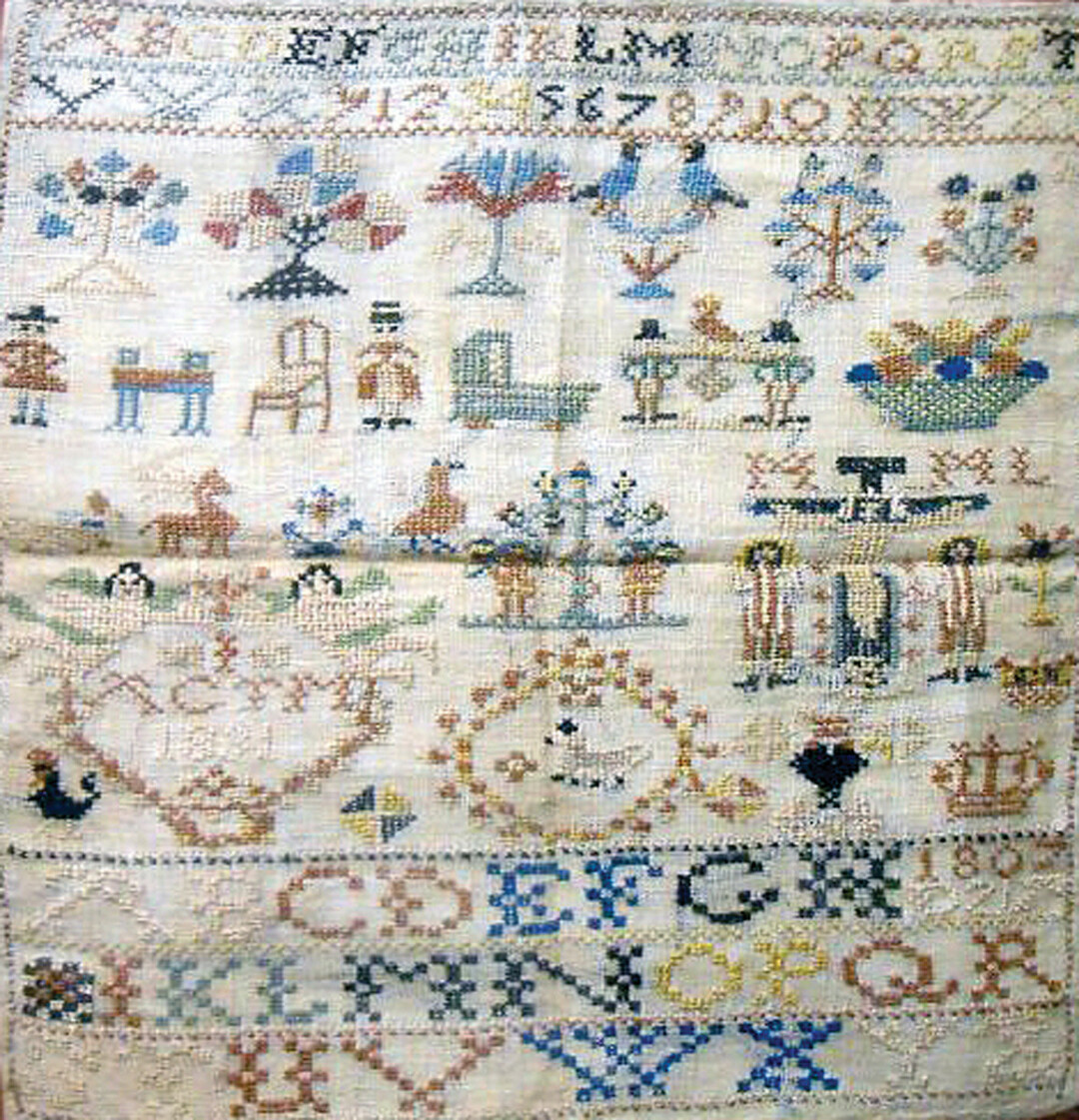 While many arts and crafts have continued into the present day, even becoming popular again, some seem to have stayed rooted firmly in the past. Embroidery crafts have made a comeback, however the art of the sampler has not. Samplers were usually composed of the alphabet, sometimes a saying or phrase and a few images that a child could use to practice their embroidery skills. The Museum has a few fine examples all dating prior to the settlement of the Gallatin Valley. The oldest one appears to be from 1831 (it includes two dates, 1807 and 1831) and shows the alphabet written twice in different sized fonts with little images in between. The next oldest is from 1834, and little is known about the maker, Eleanor Hill, but it contains similar letters and a phrase. It appears she was 11 years and 6 months old when she completed the sampler. The third sampler was made by Sarah Purdom in 1856. Sarah was the sister of Mrs. Rev L.B. Stateler. This sampler was donated to the Sons and Daughters of Gallatin County Pioneers and in turn given to the Gallatin History Museum in 2016. We also have a pillowcase with a sampler on the front which has a large border with a stitched design of a rooster and the text “1913” and “Bozeman, Montana.” The pillowcase was made by “Grandmother Nordquist.”

A unique item related to embroidery and sewing was also given to the Sons and Daughters: a needle case carved to look like a snail from a piece of wood. This piece was donated to the society by Mrs. E.H. Kleinschmidt. And as recently as this last week, the Museum received a pair of hand-carved knitting needles and spool, which were made by the sons of Christina Rentekler Dale for her use in the 1920s. The spool is still wound with a brown wool yard and the beginnings of a ribbed knitting project still rest on the needles.

It seems things like knitting and embroidery were done in the quiet of the evening, sometimes need-based (socks for the children for example) and sometimes just for pleasure. In contrast, projects like weaving and quilting were done in community. 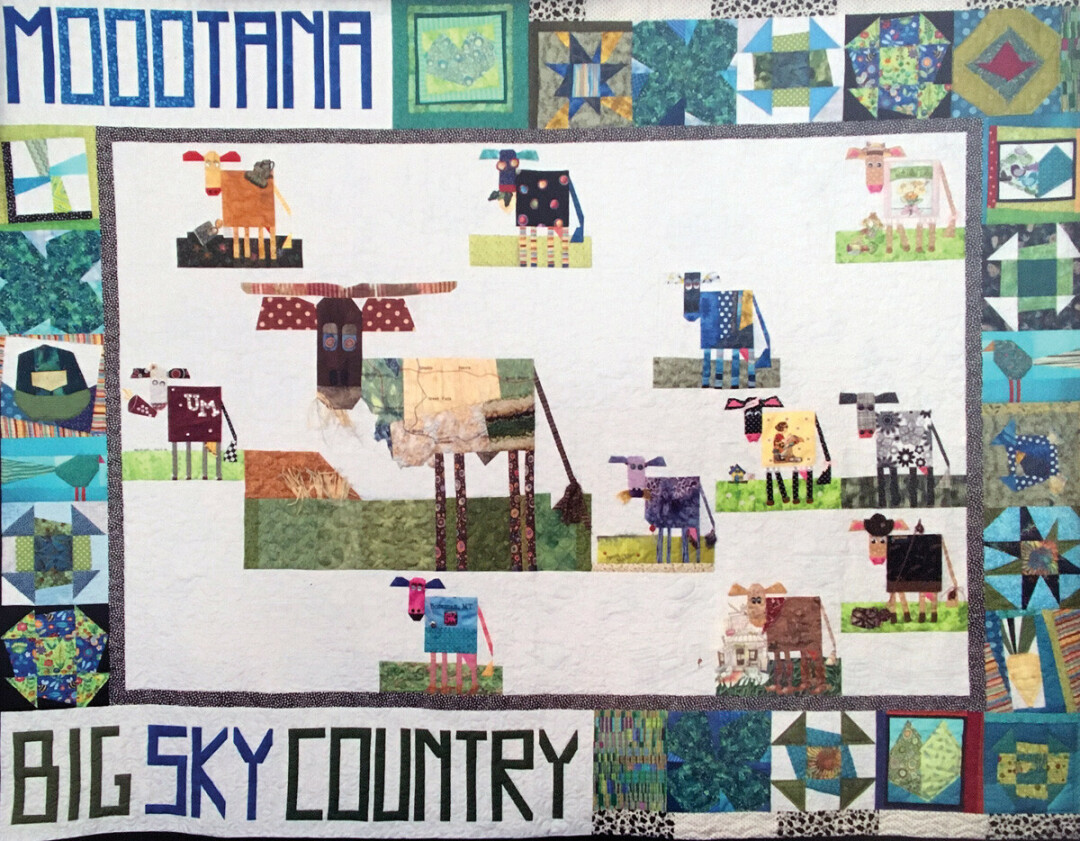 The Museum has many more items in its collection that go on to demonstrate how items were both created in unity with others and as a personal pastime. This brings us to a closing inquiry: Would you be interested in joining fellow community members in creating a timeline of the Gallatin Valley through embroidered panels? If so, The Gallatin History Museum is proud to announce a new community project: the Gallatin County Tapestry. The Museum is currently working with local artists to create a timeline of images that will tell the history of Gallatin County from the land to the First Peoples to the creation of all that Bozeman and the surrounding communities are today. Once the drawings are complete, we are going to ask you, our community, to join us in embroidering a panel, or two, or many!

Each participant will be given a kit containing the panel image on fabric, a color guide, a history snippet on the panel content, one hoop, and the embroidery floss and basic needles needed for the project. We ask that our participants be creative in the way they use the embroidery floss to show us your unique style. We welcome a plethora of stitches! We will also be sharing online content and resources to assist anyone who wants to pick up an embroidery needle for the first time.

We will be asking for a donation for each kit, big or small, it is up to you, to pay what you can for the kit. We do not wish to turn anyone away because of cost.

We look forward to sharing more details about the project soon but if you are already interested, please email Kelly Hartman at curator@gallatinhistorymuseum.org or call 406-522-8122 to get on an email/mailing list.