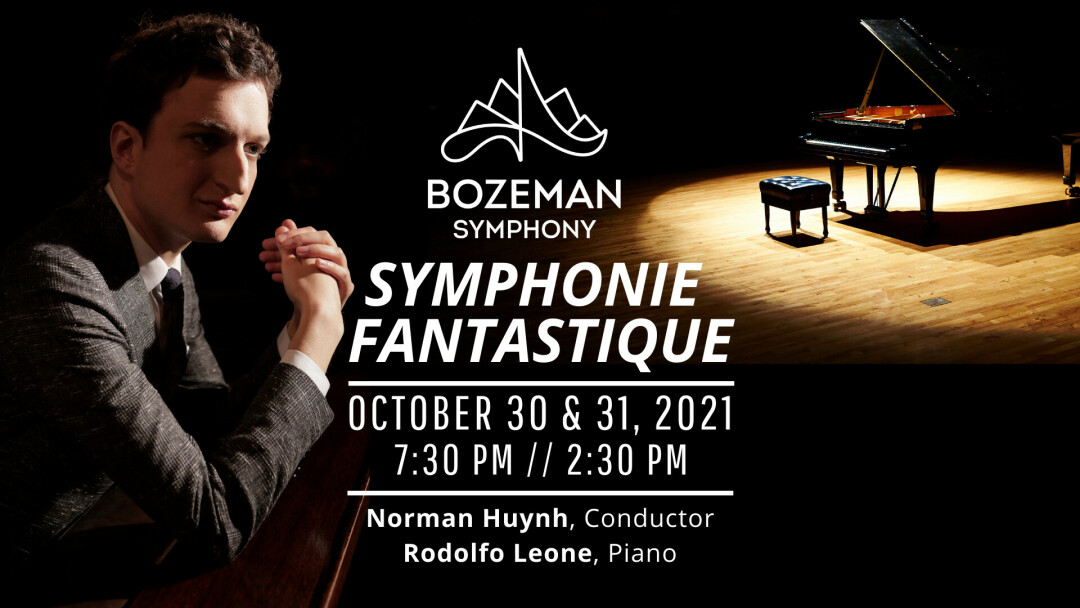 Celebrate a haunting Halloween weekend with the Bozeman Symphony’s performances of Symphonie Fantastique, a rare sonic event that may not be witnessed in Bozeman again for decades to come. The last time the Bozeman Symphony presented Hector Berlioz’s fantastical masterpiece of human emotion was May 1, 1977. Sergei Prokofiev’s whimsical yet dramatic Piano Concerto No. 3 in C Major will open the concert starring brilliant Italian-born pianist Rodolfo Leone.

Music Director Norman Huynh will conduct Berlioz’s Symphonie Fantastique as it was intended since its premiere in 1830, with massive bellowing church bells, a dramatic voiceover by Montana Shakespeare in the Park’s Kevin Asselin, two harps, and more, to tell this riveting tale of love and jealousy.

“We are bringing in 900-pound custom-casted bells that Berlioz scored intending to depict the gates of Hell opening up. Eight years ago, I was in a performance where these bells were used and it was truly spine-tingling to hear,” said Huynh. “I’m so thrilled that Bozeman will be one of the few places in the world to hear this piece in the way it was intended.”

Berlioz’s Symphonie Fantastique, written in five movements, tells his story as an artist gifted with a lively imagination who has poisoned himself with opium in the depths of despair because of hopeless, unrequited love for Irish actress Harriet Smithson.

“We can all relate to having a crush on someone. Berlioz used those feelings of obsessive love as inspiration to compose this massive spectacle of emotion through sound and music,” said Huynh.

In addition to Berlioz’s iconic finale, Music Director Huynh will open the performance with one of his favorite composers, Sergei Prokofiev’s Piano Concerto No. 3 in C Major. Prokofiev’s distinct style will be on display as the Bozeman Symphony musicians and guest pianist Rodolfo Leone perfectly blend rapid and percussive playing with lyricism and rich harmonies throughout the three movements.  “Prokofiev’s Piano Concerto No. 3 is a piece that demands extreme technical skill. There is a point towards the end of the first movement where it is almost as if smoke is flying off the keyboard from the pianist’s fingers moving at a breakneck speed,” said Huynh. Guest pianist Rodolfo Leone will bring these lush melodies and firework machine-like rhythms to life for the perfect start to this explosive program.

Performances will be held in person on Saturday, October 30th at 7:30 PM and Sunday, October 31st at 2:30 PM, at the Willson Auditorium (404 West Main Street), downtown Bozeman. The Saturday, October 30th performance of Symphonie Fantastique will be livestreamed on the Bozeman Symphony's website, YouTube, and Facebook starting at 7:30 PM. Pre-concert talks with Music Director Norman Huynh will take place beginning at 6:30 pm Saturday and 1:30 pm Sunday at the Willson Auditorium and are available to attend with the purchase of your concert ticket. These performances would not be possible without strong community support and sponsorship. The Symphony wishes to thank David Ross and Risi for their season sponsorship, Thomas J. Scanlin for his supporting sponsorship, and Gary and Margaret Kachadurian for generously sponsoring the livestreaming of the Saturday evening performance.

Ticketing: Individual tickets are available for purchase online at bozemansymphony.org or by phone at 406-585-9774. Tickets at the door based on availability. Adult tickets range from $27.00-$67.00.  Student discounts are available. Please contact the Bozeman Symphony at 406-585-9774 or info@bozemansymphony.org with questions you have regarding performance, ticket sales, venue, seating information, and COVID-19 safety protocols.

Rodolfo Leone, piano - The brilliant 29-year-old Italian-born pianist Rodolfo Leone, whose career is supported by the Amron-Sutherland Fund for Young Pianists at the Colburn School, was the first prize winner of the 2017 International Beethoven Piano Competition Vienna. Described as “a true sound philosopher” (Oberösterreichische Nachrichten), Rodolfo released his debut album on the Austrian label Gramola in May 2018. The all-Beethoven disc features two pillars of the piano repertoire: the “Hammerklavier” Sonata and the “Waldstein” Sonata. His playing has been described as having “impeccable style” and “absolute technical control” (Il Nuovo Amico).  Rodolfo’s recent seasons include a collaboration with James Conlon and LA Opera and debuts with the San Diego Symphony (Liszt’s Piano Concerto No. 1) conducted by Michael Francis, Pasadena Symphony (Mozart’s Piano Concerto No. 21) with conductor David Lockington, and Borusan Istanbul Philharmonic Orchestra (Beethoven’s Concerto No. 5, “Emperor”) with Sascha Goetzel; he also performed Beethoven’s Triple Concerto in Walt Disney Hall under the baton of Xian Zhang. In May 2019, he gave a recital tour in Austria, culminating in a performance in Vienna at the Brahms-Saal of the Musikverein. He also performed recitals in Los Angeles and Naples, Florida, and appeared on the chamber music series Le Salon de Musiques in Los Angeles. As a 2018-19 Performance Today Young Artist in Residence, Rodolfo’s live recordings were broadcast nationally throughout the United States.

A native of Turin, Italy, Rodolfo made his orchestral debut in 2013 performing Rachmaninov’s Piano Concerto No. 3 with the Haydn Orchestra of Bolzano and Trento (Italy). He toured Italy with that orchestra the following year performing Shostakovich’s Piano Concerto No. 1. Rodolfo made his North American debut in 2014 performing Liszt’s Piano Concerto No. 1 with the Toronto Concert Orchestra. Since then, he has performed with, among others, the Vienna Radio Symphony Orchestra with Stéphane Denève and the Colburn Orchestra at Walt Disney Concert Hall; and recitals at Festival Napa Valley and the Soka Performing Arts Center. He has also performed chamber music with Lynn Harrell, Fabio Bidini, Andrew Schulmann, and the Viano String Quartet.

Rodolfo has performed extensively throughout Europe, North America, and China. These performances include debuts in venues such as the Musikverein in Vienna, Steinway Hall in London, the Music Hall of the National Centre for the Performing Arts in Beijing, the Politeama Theatre in Palermo, the Mozart Concert Hall of Accademia Filarmonica and Teatro Carlo Felice di Genova in Italy, and the BASF Gesellschaftshaus in Germany. A top-prize winner of several major piano competitions, Rodolfo was awarded top prizes at the 2014 Toronto International Piano Competition and the 2013 Busoni International Piano Competition. Pianist magazine described his concerto performance during the 2017 International Beethoven Piano Competition as a “communion with the orchestra” that “was raptly convincing… robust and joyful.”