From space, it is easy to see which areas of the Earth are covered in snow, but the appearance of snow on certain terrain is only part of the picture.

“The goal is to understand how much snow is on the ground,” said Montana State University snow hydrologist Eric Sproles. “Is it 5 inches deep or it 50 inches deep? And what’s the density of that snow?”

Sproles, an assistant professor in the Department of Earth Sciences in the College of Letters and Science, leads one of six field sites in the western U.S. for NASA’s SnowEx project, which is seeking better ways to measure snowpack and its physical properties on a global scale.

The NASA-led effort is at the end of a five-year campaign that has expanded to include partners in the military, academic institutions and the U.S. Forest Service. At its core, NASA’s SnowEx tests which qualities of snowpack can and cannot be measured from above. 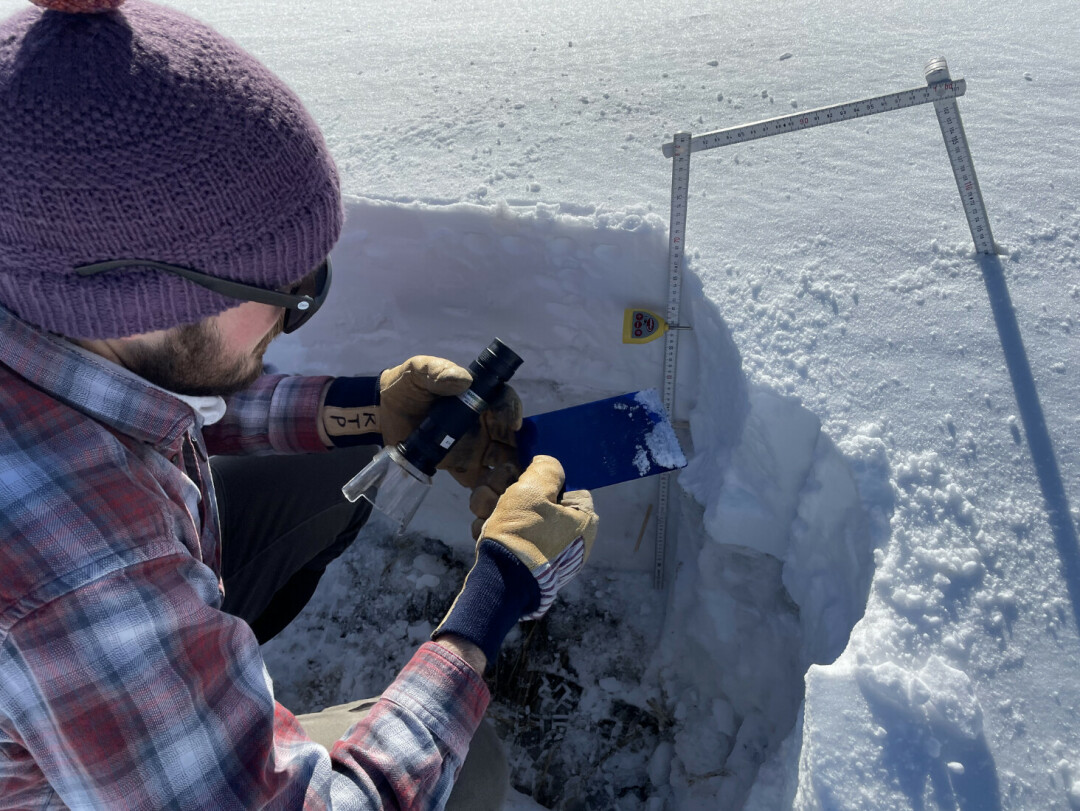 If SnowEx is a success, the next project will develop a snow-focused satellite. NASA’s Ice, Cloud and Land Elevation Satellite, known as ICESat-2, launched in 2018. ICESat-2 uses a laser to measure the height of snow as it accumulates over the Earth’s topography. But the data doesn’t give insight into that snowpack’s composition, and ICESat-2 has tasks outside of measuring snow.

Sproles leads the SnowEx site at MSU’s Central Agricultural Research Center in Moccasin, the only site in Montana and the only one based in the prairie rather than the mountains.

Not only are the prairies geographically expansive, but they are also the core of food production, be that livestock or crops.

The Moccasin site is flat, or what Sproles termed “topographically challenged.” It has 14 different cover types, with fallow and crops such as lentils, peas and winter wheat on one square kilometer. This variability allows Sproles and his team to test their ability to measure snowpack over different surfaces and to look at which retain the snow most effectively. Wind, which blows at the site often and averages about 12 mph, will move snow from barren ground, but the research has already found that leaving crop stubble such as longer wheat stalks can help the area hold onto snowfall and its moisture.

“There are some really interesting questions I think we’re getting at here that we wouldn’t be able to up in the mountains where we are normally working,” Ross Palomaki, an MSU doctoral student who has been developing tools to map river ice, said in a NASA video about the Moccasin site.

Because light bounces off snow, radiation from the sun is reflected rather than being absorbed into the Earth. Keeping snow on the ground is, therefore, one way to retain more moisture in the soil and offset the impacts of climate variability, Sproles explained.

Sproles created a class around the SnowEx research, titled Field and Remote Measurements of Snowpack, and amassed a team with three graduate and five undergraduate students.

In October, the team raced the storms to Moccasin to install nine moisture stations loaned from the USDA and a sensor which can detect water on the ground and soil moisture within 200 yards. Two weather stations measure snow depth, wind speed, temperature and relative humidity. All of that equipment was removed before April’s planting and will be reinstalled in the fall.

Throughout the winter the class took detailed ground measurements that will be used to confirm the data collected by drone, plane and satellite that mapped the albedo or reflective quality, topography and snow depth. One technique involved an advanced form of microwave pulses that reflect differently based on snowpack and snow density.

“My intent is to keep our site rolling for a couple years so we don’t just have one year of data — we can say what is the variability between years, how did things change,” Sproles said.

He is already seeing advances based on the research.

“SnowEx is applied science,” Sproles said. “It’s science working for the people, both in Montana and beyond.”

Small insights — such as the observation that 10 inches of wheat stubble will maximize water retention — can help producers make better decisions to manage the water, carbon and nitrogen balance on their land.

“It’s a result that has broad applications and implications,” Sproles said. “We can begin to manage how much snow we keep on the prairie.”

Sproles grew up in Florida, but his time as river guide in northern Colorado, Costa Rica and Chile pushed him toward studying snow and water.

“I really became interested in water resources in the West,” Sproles said. “I was seeing firsthand how it was playing out both economically and environmentally.”

His perspective went global while working as a research hydrologist in Chile, where Sproles first heard of SnowEx. NASA’s research effort was on his mind when joined the MSU faculty three years ago, and he proposed the prairie site at a SnowEx workshop in his first year. The snowpack in Montana and Chile are very different, as are the snowpack in mountainous or topographically challenged areas. A true breadth of understanding must look beyond borders, Sproles said. To highlight this for students, the Geospatial Snow, Water, and Ice Resources Lab at Montana State uses the motto “Based in Montana with a backpack ready for the world.”

Snow and water systems cannot be researched in a bubble because these resources have a far-reaching impact, Sproles explained. The snow in the Andes melts and waters the citrus fruits that end up in American grocery stores or feeds the grapes that become Chilean wine.

“We rely on snowpack everywhere,” he said. “We’re in a highly interconnected world and understanding it and managing it is important.”