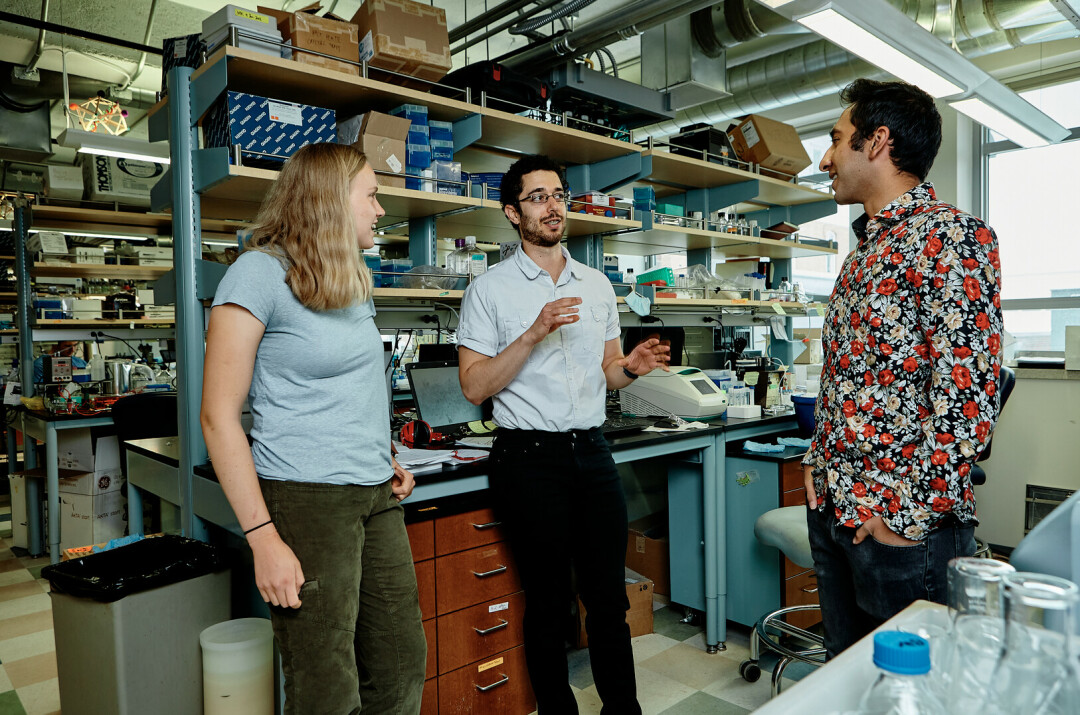 While the coronavirus pandemic has proven once more that the tiniest germ can upset global civilization, a Montana State University team has responded by illustrating that ancient strategies used by bacteria to battle viruses can be repurposed into transformative technologies.

Leveraging his lab's expertise in the bacterial immune system called CRISPR, MSU researcher Blake Wiedenheft turned the urgency of the first wave of COVID-19 last spring into an opportunity to develop a more rapid and sensitive virus test. Now, roughly a year later, his team has demonstrated that the new diagnostic tool can accurately detect even relatively small amounts of coronavirus in patient samples in less than 30 minutes and sometimes in as little as one minute. The work was recently published the journal Cell Reports Medicine.

"The coronavirus revealed the limitations of our standard diagnostic tools, which are relatively slow and expensive," said Wiedenheft, associate professor in the Department of Microbiology and Cell Biology in MSU's College of Agriculture. "The fact that a bacterial immune system could be repurposed to address those shortcomings is remarkable."

The technology could also be used against other viruses such as Zika and Ebola, Wiedenheft added. "We intend to continue to develop this into a superior diagnostic tool that could really help patients and be an important contribution in the fight against disease," he said.

The technology is based on a Type III CRISPR system, which, in bacteria, monitors for viral invasion. CRISPRs work like molecular homing devices that search and destroy the genetic material of viruses, but the Type III CRISPR systems that Wiedenheft's team is studying have an additional feature that made them well-suited for repurposing into a diagnostic tool, according to Andrew Santiago-Frangos, lead author of the study and a postdoctoral researcher in the Wiedenheft lab. When Type III CRISPRs bind to their viral targets, they undergo a structural transformation akin to lighting a signal flare, he said. That flare is detected by various other CRISPR molecules, which then destroy the virus.

Santiago-Frangos isolated the Type III CRISPR complex from bacteria and reprogramed it to recognize segments of the coronavirus genome. By understanding how the CRISPR system generates the molecular flare, the team was able to design three different chemical reactions, two of which result in color changes that can be seen with the naked eye, Santiago-Frangos said.

Working alone in the lab because of COVID-19 precautions in the early weeks of the pandemic, Santiago-Frangos saw a test solution turn from purple to orange, the first proof they were onto something. "There was a lot of excitement," he said.

Other scientists had previously demonstrated that related CRISPR systems called Cas12 and Cas13 could be repurposed to detect Ebola and Zika. Those tools have proven valuable, but the intrinsic signal amplification provided by the molecular flare of Type III CRISPRs may provide additional advantages, Wiedenheft noted. Type III CRISPRs hadn't been previously used for diagnostics, he said.

CRISPRs are perhaps best known for Cas9, which has been repurposed into a precision genome-editing technology that is rapidly reshaping medicine, enabling previously unthinkable cures for genetic diseases and the promise of overcoming cancer. The 2020 Nobel Prize in Chemistry went to University of California, Berkeley, professor Jennifer Doudna for her role in pioneering that technology. Wiedenheft worked in Doudna’s lab from 2007 until he joined MSU's faculty in 2012.

The breakthrough of turning Type III CRISPR systems into a rapid diagnostic tool "is more evidence that CRISPRs are versatile and powerful platforms for biotechnology," Wiedenheft said. Adding to the excitement, "we can reprogram these systems overnight to recognize other viruses like Ebola or influenza."

The next steps in making the technology useful are streamlining and packaging the chemistry into a form that can be administered in a medical setting, he said. The technology is in the process of being patented by MSU and licensed it to a local startup company, VIRIS Detection Systems, that is currently working on Food and Drug Administration authorizations. The company hopes to roll out the CRISPR-based test later this year. Wiedenheft is the founder of VDS and an inventor on patent applications related to the technology.

"Being from Montana and knowing about our rural areas around the state that don't have easy access to the usual diagnostic equipment, it's been really cool working on this project," said Laina Hall, a senior with a dual major in biochemistry and microbiology who worked closely with Santiago-Frangos. "It's given me a new perspective on science, working on something that can lead to applications that can help people."

Hall is a co-author on the paper with Pushya Krishna, a senior and dual major in English literature and cell biology and neuroscience; both are among MSU's four winners this year of Goldwater Scholarships, the nation's premier scholarship for undergraduate students pursuing research careers in the natural sciences, mathematics and engineering.