Tinworks Arts has named the five artists as recipients of its 2021 Tinworks Artists Grant, which this year total $50,000. The grants are issued in support of contemporary art and craft in Montana and are aimed at nurturing the arts professions in the region.

Tinworks Art received 115 applications making the grant highly competitive. Each grantee will receive a remunerative award of $10,000 each, a studio visit from the curatorial team, and a place in the public lecture series in Fall 2021. Each artist is required as part of the grant to participate in one outreach activity for K-12, or an underserved community of their choice.

Tinworks Art actively seeks to break down barriers that have historically excluded certain artists, art, and audiences from the important conversations that art provokes. This year, the grant focused on supporting Indigenous artists, emerging artists, and those working with endangered forms of knowledge. These grants were developed with the specific goal of removing hurdles to the profession, so the impact that a grant of this size might have on an artist’s career was also taken into account during selection.

The winning artists have been chosen for their demonstrated accomplishment as well as their potential for future work. The evaluators sought art that was attuned to the cultural moment, had a clear aesthetic point of view, as well as artists who made ambitious proposals. 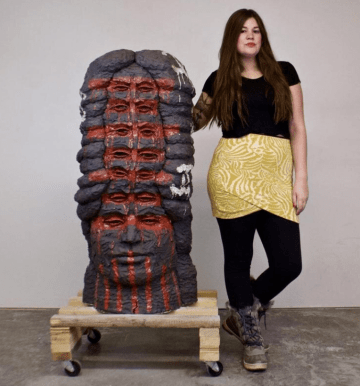 Anne Appleby (Jefferson City, MT)
Anne Appleby was born in 1954 in Harrisburg, Pennsylvania and moved to Montana at age 17. She received her Bachelor of Fine Arts in 1977 from the University of Montana and embarked on a 15-year apprenticeship with an Ojibwe elder, learning to patiently and deeply observe nature. She would watch and then translate into color the cycles of leaves, stems, buds, fruit, and seeds, transforming nature’s fluid evolution into two-dimensional portraits. Her work is held in numerous collections around the world. For her project Ms. Appleby will be working, along with the staff of the Missoula Art Museum, on a retrospective catalog of her work that will help to frame it critically and historically.

Raven Halfmoon (Helena, MT)
Raven Halfmoon (Caddo Nation) is currently based in Helena, MT where she is an artist-in-residence at the Archie Bray Foundation for Ceramic Arts. Her work has been featured in multiple exhibitions throughout the U.S. as well as internationally, and was recently featured in Vogue. She is represented by Fritz + Kouri Gallery in Santa Fe, NM. For her project, Ms. Halfmoon has proposed a monumental sculptural piece, anchored in Caddo ceramic traditions, as a response to recent removals and reframing of public monuments.

Tracy Linder (Molt, MT)
Tracy Linder lives in south central Montana where she continues to find source material for her installations such as bone, leather, seeds, leaves, grasses, often combined with resin and beeswax. Her work addresses our integral connection to the land, the sanctity of our food sources and the innate survival skills of all species. Yellowstone Art Museum presented a major mid-career retrospective of her work in the winter of 2020, entitled “Open Range” and her work has appeared in Sculpture Magazine.  Ms. Linder will be using her grant money to perform environmental upgrades to her studio for safer working conditions when constructing her installations.

Alayna Rasile (Bozeman, MT)
Alayna Rasile is a natural dyer and a handweaver who utilizes traditional craft forms and expertise that come from decades of studying fiber structures and engaging in hands-on material research with plant dyes. She is currently an instructor at Montana State University where she received her MFA. Ms. Rasile has proposed a project entitled Grand Prismatic Garden, a public dye garden as the site for a living art exhibition where she will approach the cultivation of a wide range of dye plants as a sculptural installation.

Paul Rowley (Somers, MT)
Paul Rowley was born in Seattle, Washington, is an enrolled member of the Tlingit and Haida tribes of Alaska, and a descendant of the Blackfeet and Cree of Montana. Paul received his MFA from Pacific University in creative writing and he weaves both contemporary and traditional objects using cedar bark, striving to make wearable art that reflects the rich traditions of the Pacific Northwest’s tribal history. Using his grant funds, Mr. Rowley will acquire space to make new work and to teach cedar harvesting and weaving in northwest Montana.

Tinworks Art would like to extend our deepest appreciation to the team of evaluators who lent their time and expertise to this process.