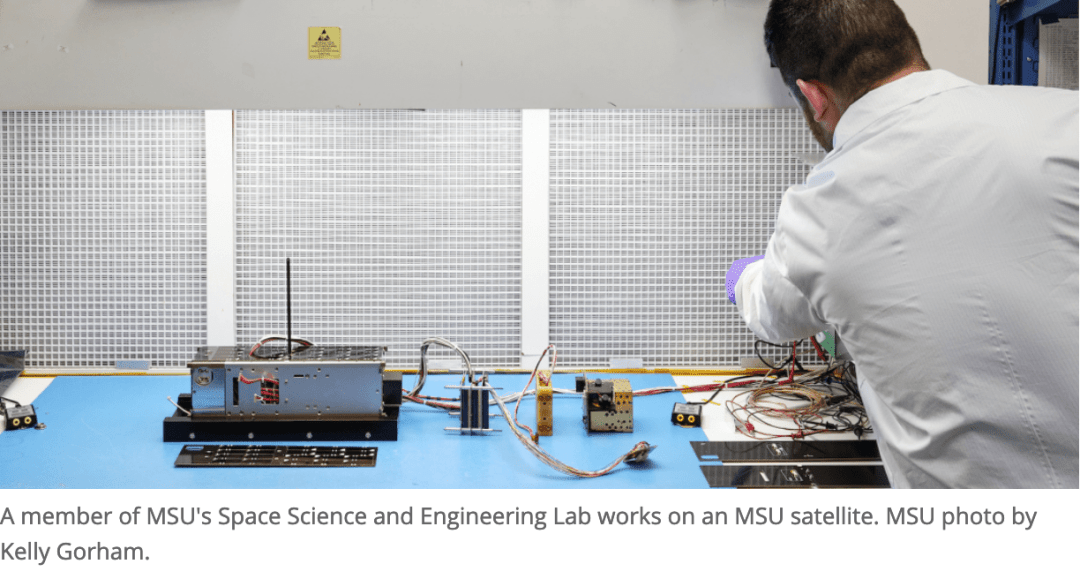 Culminating years of work, a small satellite designed and built by Montana State University students is set to launch Saturday aboard a cargo resupply rocket bound for the International Space Station.

The bread loaf-sized satellite, called by the acronym IT-SPINS, will dock at the space station until later this spring, then be propelled into orbit and commence a more than six-month mission of measuring the properties of Earth's atmosphere at the edge of outer space.

Since the project kicked off in 2015 with a $1 million grant from the National Science Foundation, more than 30 MSU students in MSU's Space Science and Engineering Laboratory have been involved in developing the satellite, according to David Klumpar, SSEL director and research professor in the Department of Physics in MSU's College of Letters and Science. The launch will mark the 12th time a small satellite designed and built by MSU students in SSEL has been sent to outer space.

"We give students the opportunity to take a lot of responsibility in developing the mission, designing and making the hardware, putting it all together and then testing it to make sure it'll survive the launch and work in space," Klumpar said. "It's a really hands-on experience."

Using a specialized sensor created by the nonprofit research institute SRI International, the satellite will measure ultraviolet light emitted by charged particles, or ions, in the upper layers of Earth's atmosphere called the ionosphere and thermosphere. IT-SPINS stands for Ionosphere-Thermosphere Scanning Photometer for Ion-Neutral Studies. The study could lead to improved forecasting of "space weather" in which variations in solar ultraviolet and X-ray radiation cause the number and intensity of ions to increase, sometimes interfering with satellites and orbiting spacecraft.

Besides the sensor, the satellite — including solar panels, batteries, communications hardware and a variety of computerized controls — was almost entirely designed and built by students, mainly engineering and computer science majors, with the help of SSEL staff, Klumpar noted.

Nevin Leh, who earned his bachelor's in computer science from MSU in 2016, worked on the project as a junior and senior. He programmed the software that sends commands to the satellite, tracks it in the sky and downloads the data it collects.

"It was a great experience, working in a small lab with people from all different disciplines," said Leh, who returned to SSEL after graduating from MSU to work as a research engineer. "You really get to see the whole process."

Recent months have been a scramble as Leh, along with other SSEL staff and students, went through the final rounds of testing to ready the satellite for launch. "After you send something to space, you can't just go up there and fix it," Leh said.

Part of the testing involved putting the satellite in a vacuum chamber at MSU and cycling the temperature between minus-20 and 50 degrees Fahrenheit, simulating the harsh sun and chilling shade the MSU creation must endure as it orbits the Earth 14 times per day. The MSU team included specialized materials and coatings in the design to help the device retain needed warmth while also radiating excess heat.

SSEL will be involved in monitoring IT-SPINS and downloading data when the satellite passes within line-of-sight of the MSU campus, which will happen a couple times per day, according to Klumpar. MSU researchers will be involved in analyzing the data using a software developed by the Applied Physics Laboratory at Johns Hopkins University, a collaborator on the project.

The project has had some hiccups, Klumpar said, including a canceled launch last year because of COVID-19 impacts, so it's bittersweet that many of the students who originally worked on the project have graduated and moved on. Several have gone on to work in aerospace at

Northrop Grumman, Blue Origin and Los Alamos National Laboratory. "These students are really sough after once they graduate," Klumpar said. "They get snapped up."

The launch on Saturday, Feb. 20, is set for 10:36 a.m. Mountain Time and will be available for public viewing online at: