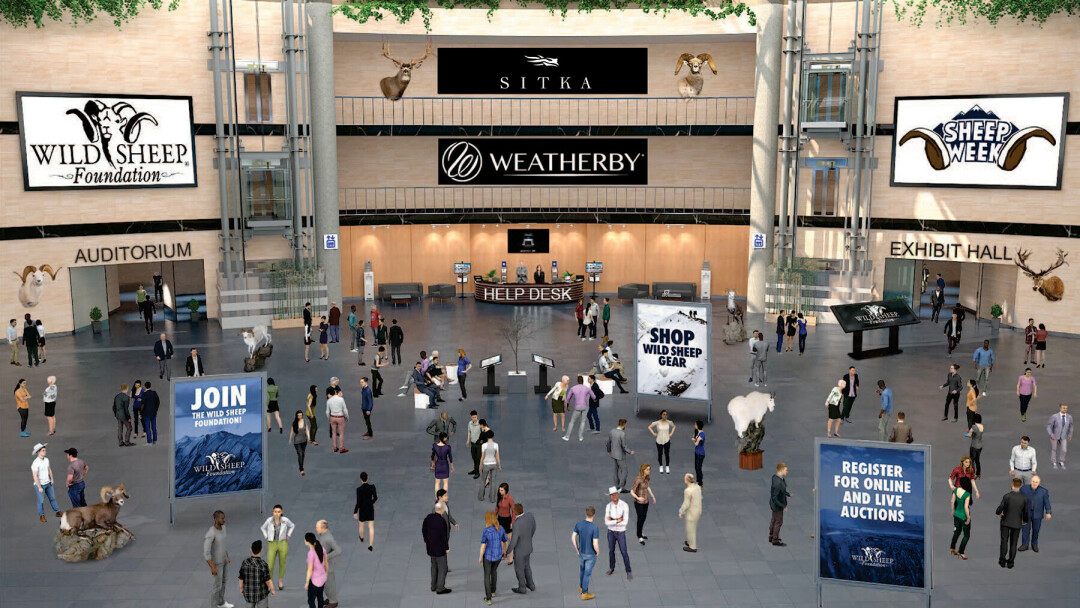 The Wild Sheep Foundation (WSF), with world headquarters in Bozeman, Mont., has announced the launch of its first-ever virtual convention to raise millions of dollars for the betterment of wild sheep populations throughout the western US, western Canada, and northern Mexico, and beyond. For over 45 years, WSF has held its annual fundraising convention and associated events live in major metropolitan venues, primarily Reno, Nev., where over 10,000 typically attend over three days. Because of the Covid-19 outbreak, WSF’s board and staff in summer 2020 began planning to take the January event virtual to comply with health mandates and to protect the health and safety of its members, vendors, and supporters.

“The WSF board of directors and staff actions over the last ten months have reinvented and retooled WSF business units while keeping our eyes on our mission to put and keep wild sheep on the mountain,” says WSF president and CEO Gray N. Thornton. “An exciting manifestation of this reinvent and retool mandate has been the recent launch of our online/hybrid January 11-16, 2021, v-convention that we have named Sheep Week® The Experience at www.sheepweek.org.”

Even though WSF began a “dual path” pivot mid-summer of planning both a virtual event as well as its typical in-person convention, Thornton says that the groundwork of researching, evaluating, contracting and building out a completely new v-convention has been a heavy lift. WSF staff and contractors have had new platforms to learn, build and release, then remarket this novel concept to its exhibitors, membership, and broader global audience.

“Frankly, it has been a complete re-do of a huge annual event in less than three months,” Thornton says.

For the past eight years, WSF has been offering its auctions online during live stage events each day at the convention so that bidders not in attendance can still participate and win prizes, from hunts and travel to artworks and jewelry. “Our platform is tried and true, but over the summer, we worked with our vendor to improve and expand the product with more visual functionality,” Thornton says. “WSF debuted timed auctions starting this December, which will close on Monday, Tuesday, and Wednesday nights of Sheep Week® in January. Then, we go hybrid. From our remote auction stage and studio in Reno, we will feed live auctions to anyone who registers and logs in online during the Thursday, Friday, and Saturday nights of the virtual convention.”

Each evening auction will include 20 to 25 items, the most anticipated of which are sales of state, provincial, territorial and tribal/First Nation permits and other premier offerings. Thornton adds. “These live auctions feature our familiar auctioneers and ring-men to encourage and take your bids.”

The general public and all WSF members can register to bid online at www.bid.wildsheepfoundation.org.

Meanwhile, one of the highlights of past Sheep Weeks® is the highly popular raffles, which will be hybrid live and online at www.wildsheepraffle.org. The drawings will feature sheep hunting adventures and outdoor gear prizes. The Saturday, January 16, raffle winners will be drawn and streamed live from WSF’s Cody, Wyo., raffle command center.

Educational outreach and recognition of conservation leadership are a mainstay of WSF conventions. The Sheep Week® virtual platform will feature educational seminars, live presentations, conservation awards, webinars, featured films and global “live” forums. These will be streamed online from two virtual auditoriums. All this is available to Sheep Week® registrants inside WSF’s virtual platform at www.sheepweek.org.

“No one wants to be online for hours and hours on end. You don’t have to,” Thornton says. “Sheep Week® presentations, both live and taped, will be provided in easy, pithy, and fun-to-view segments. Being a virtual event also allows us to keep it accessible online much longer than a three-days or week-long show. The platform will be available for a total of five weeks, until February 16.”

“We found a mature platform used internationally for large agricultural expos, giant tech conferences, and career fairs. It is a tried, true, and tested platform in use for a decade,” Thornton says. “The WSF virtual expo hall has a Sheep Shop store and other amenities. When you enter the Exhibits Hall, you can visit and shop with exhibitors in five sub-halls. We have daily and weeklong games to encourage engagement within the hall. You can live chat either individually or as a group with an exhibitor or just set an appointment for a later call or Zoom visit.”

“And you can experience this hall with zero travel costs, zero hotel, and food costs, and zero health risk,” Thornton adds.

All-inclusive registration is available for $50 at www.sheepweek.org. All registrants will be entered into a drawing for a 2021-2022 free-range desert bighorn sheep hunt in Sonora, Mexico, valued at $65,000, a Gunwerks rifle package valued at $10,690 and you can enter to win a 10-day Yukon Stone’s sheep hunt valued at $60,000!

The Wild Sheep Foundation (WSF), based in Bozeman, Mont., was founded in 1977 by wild sheep conservationists and enthusiasts. With a membership of more than 8,500 worldwide, WSF is the premier advocate for wild sheep and other mountain wildlife and their habitats. WSF has raised and expended more than $135 million on wild sheep habitat and population enhancements, education, and conservation advocacy programs in North America, Europe, and Asia to “Put and Keep Wild Sheep On the Mountain”®. These and other efforts have increased bighorn sheep populations in North America from historic lows in the 1950-60s of 25,000 to more than 85,000 today. www.wildsheepfoundation.org.