What's Your Beef? The Snow Has Got To Go

One of Bozeman’s most outstanding qualities is our beautiful, thriving downtown district. Main Street serves as the primary route for Bozeman commuters. In this town, I consider there to be two streets with a real traffic problem: Main Street, which travels East and West, and 19th Ave, which travels North and South. These two streets are significant to the residents of Bozeman’s transportation needs. Most “Main Streets” are state highways; this becomes a problem when taking trucking traffic into account. In a study done for city planners in 2019, there were, on average, 36 trucking freights traveling through downtown Bozeman on a weekday. With the growing population of Bozeman and the surrounding area, it is safe to assume this number has risen since then. Truckers are required to follow federal trucking routes, and currently, Main Street is that designated route. This funnels all trucking vehicles directly through our busy downtown district.

With Main Street utilized by locals and travelers alike, Bozeman’s traffic problem is exacerbated when winter comes around. Main Street is a four-lane road that does its job in the warmer months of the year, but when the snow starts to fall, it complicates things. Without an effective snow removal route, snow plows push excess snow to the middle of the road. As a kid growing up here in town, I always referred to this as the “snow mohawk.” The “snow mohawk” severely decreases the space available for vehicles on either side, and becomes a hazard for pedestrians—sometimes the “mohawk” extends into crosswalks. During the winter months, downtown traffic gets worse; not only is there is less space for cars and trucks to travel, there is more congestion due to the lack of turning lanes on Main. 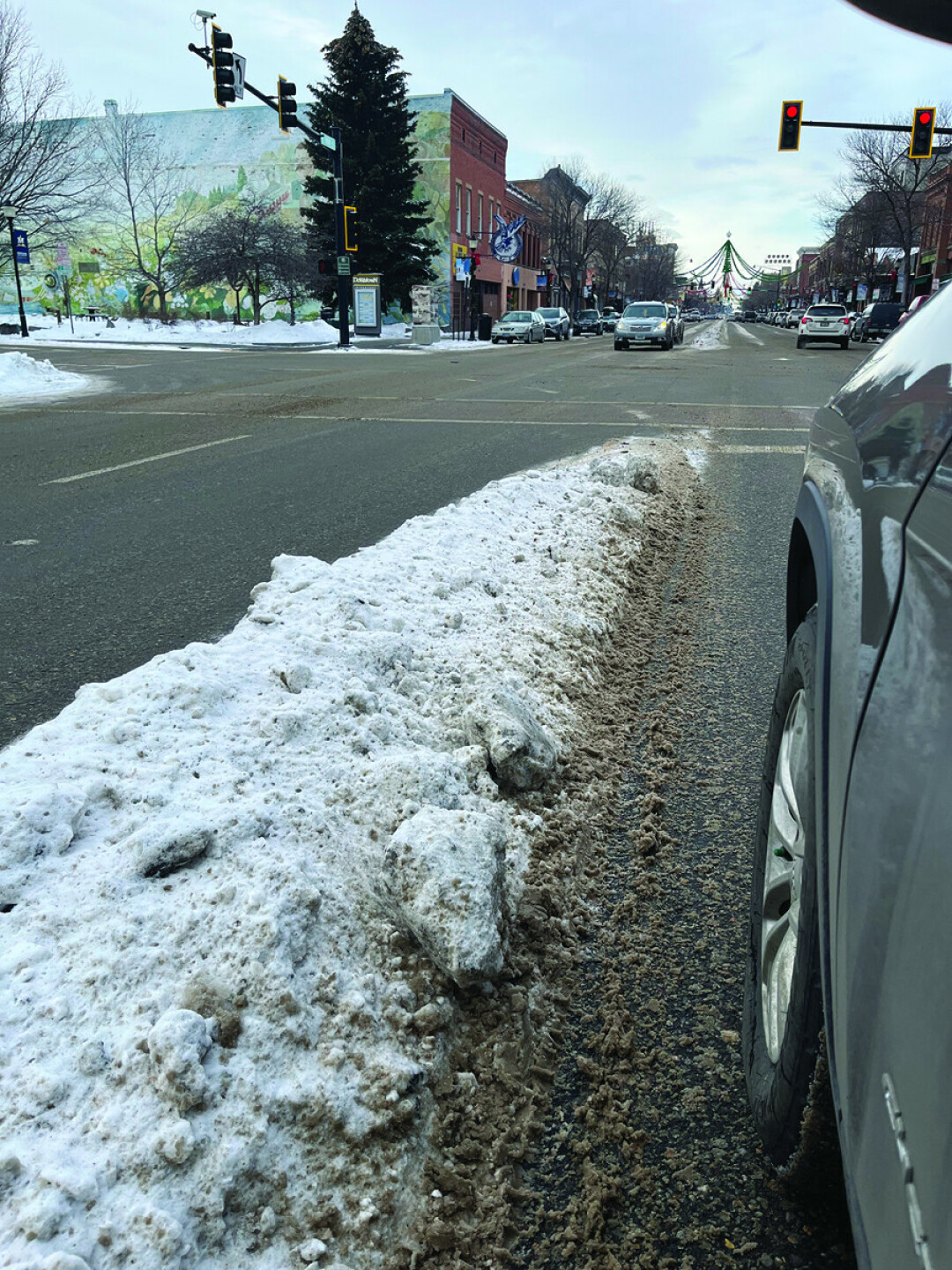 Downtown is one of Bozeman’s most lively and accessible attractions during the summer. Unfortunately, it becomes chaotic and hazardous during the winter, because a town known for its beautiful winters does not know how to handle snow. There are two facets to this problem: the trucking traffic funneled through the middle of our town, and the lack of adequate snow removal during the winter months (which can be half the year).

The problem of trucking traffic is not a problem the city can face on its own; changing the designated trucking route would require help from the State level, as these routes are federally mandated. One alternative route suggested by the city of Bozeman was to have trucking traffic continue on I-90, using Jackrabbit Lane to connect back to the Highway that is Main Street. This alternate route would not only keep these trucks from traveling directly through our town, but could also cut back on travel time for the trucking companies. I have seen the number of traffic lights on Main Street and Huffine grow exponentially; bypassing these traffic lights would be another benefit of truckers taking an alternative route around the city.

Without anywhere to put excess snow during street plowing, the “snow mohawk” is currently an inevitable problem for downtown. Finding somewhere to put this snow is the real problem. Using equipment to remove the snow altogether is not feasible, considering how often it snows in Bozeman. The easiest method would be to have designated areas downtown in which to keep excess snow. These areas should not be located in the middle of one of the most trafficked streets in town. They could be similar to the areas the city designates for bike parking during the summer (though the bike parking areas are relatively small, and would not be able to hold the amount of snow that accumulates over the winter). With the excess snow off of Main, it would then be more feasible to remove the snow entirely if needed. The city could periodically remove the snow in these designated areas, affecting downtown traffic less than extensive snow removal operations directly on Main Street. The last thing Main Street needs is more traffic due to snow removal efforts, but if the city took these efforts off Main now, the “mohawk” might form, but the size and its impact on traffic would be significantly less.

As residents of a town known for its beautiful seasons, most of us look forward to the first snowfall and the fantastic opportunities winter brings to our home. Yet winter also brings with it the issue of our busy downtown turning into a chaotic mess, full of icy roads, traffic, and out-of-state drivers. Being better prepared for the inevitable elements of Montana winters and cutting back the traffic brought through our small downtown by trucking operations will make downtown more enjoyable and safe for residents and visitors alike.

Chris Ryan is a first-year student from Bozeman, MT who is currently majoring in University Studies.