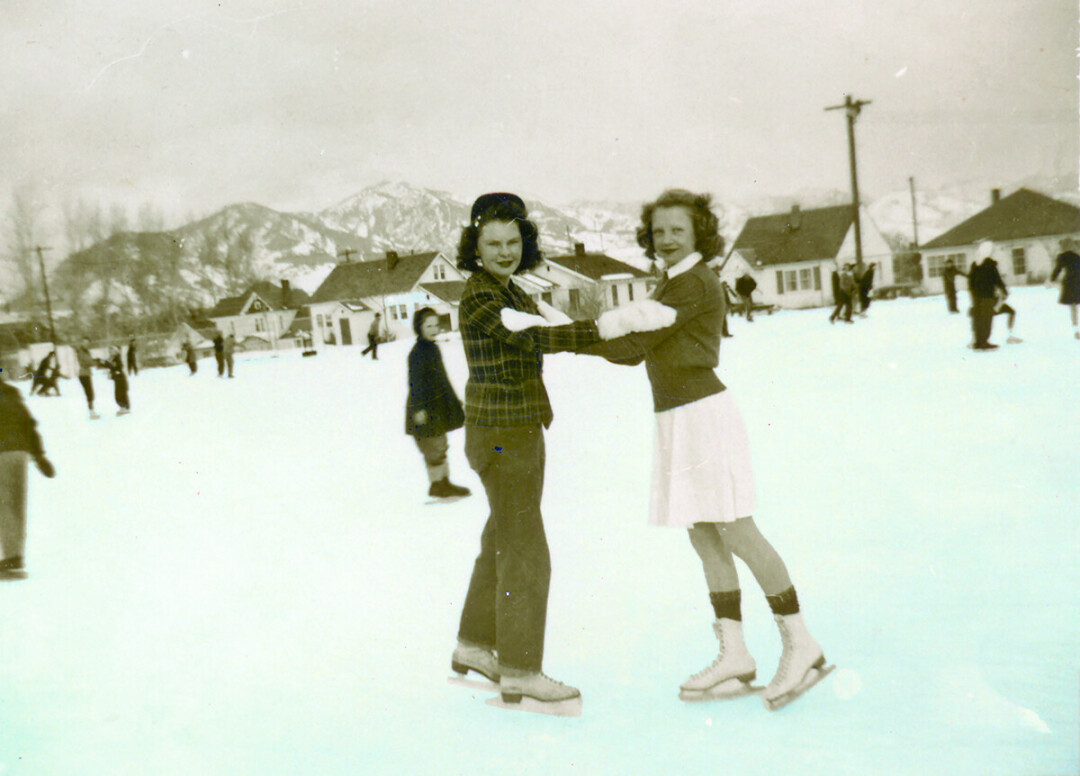 Ice skating as we know it has centuries-old roots. It evolved over time from a method of transportation to the complex sport we see today at the Winter Olympics. Early skates were simply a metal blade attached to one’s footwear with leather straps. One look at these contraptions sparks imagination of some frightening outcomes should the strap fail on a particularly fast run across a frozen pond. The great thing about ice skating is that most any frozen body of water can be used. Rural children could and still do use carefully cleared ponds, and even irrigation canals. Within Bozeman city limits, two major skating venues stand out across the generations and are still beloved today – Beall and Southside.

Beall Park was acquired by the city of Bozeman and formally established as a park in 1920. Occupying a full city block bordered by Bozeman and Black Avenues, and Short and Villard Streets, the park is named for Rosa Beall. Rosa and William Beall were prominent early Bozeman residents who owned property on Bozeman’s north side. One of many who came to southwest Montana during the gold rush of the early 1860s, William Beall partnered with Daniel Rouse and John Bozeman to establish the future community of Bozeman. William was a talented carpenter, builder, and city planner, and was responsible for the initial layout of the city’s grid-like streets.

Rosa Barker Van Vlierden Beall arrived in Bozeman with her first husband and two small daughters in 1864. Her early life in the valley was hard; eventually, the marriage ended and her husband took the children and returned to the East. Rosa never saw her daughters again, and sadly, both her children died young. After her marriage to William J. Beall in 1868, life began to improve for Rosa, and the couple built their new home on a tract of land north of Main Street. After William’s death in 1903, Rosa downsized and moved into the Evergreen Apartments on the corner of South Third Avenue and West Koch Street. She sold the Beall family home and surrounding city block to the city of Bozeman in 1920.

Beall Park sits on the portion of William and Rosa’s property where their original home was located. The house was used as a community center for several years until a large donation from Ella Clark Martin allowed for the construction of a new building. What we know today as the Beall Park Recreation Center was completed in 1927 and sits on the approximate location of the Beall house. The Beall Park Recreation Center was designed by W.R. Plew, an accomplished engineer and architect at Montana State College. 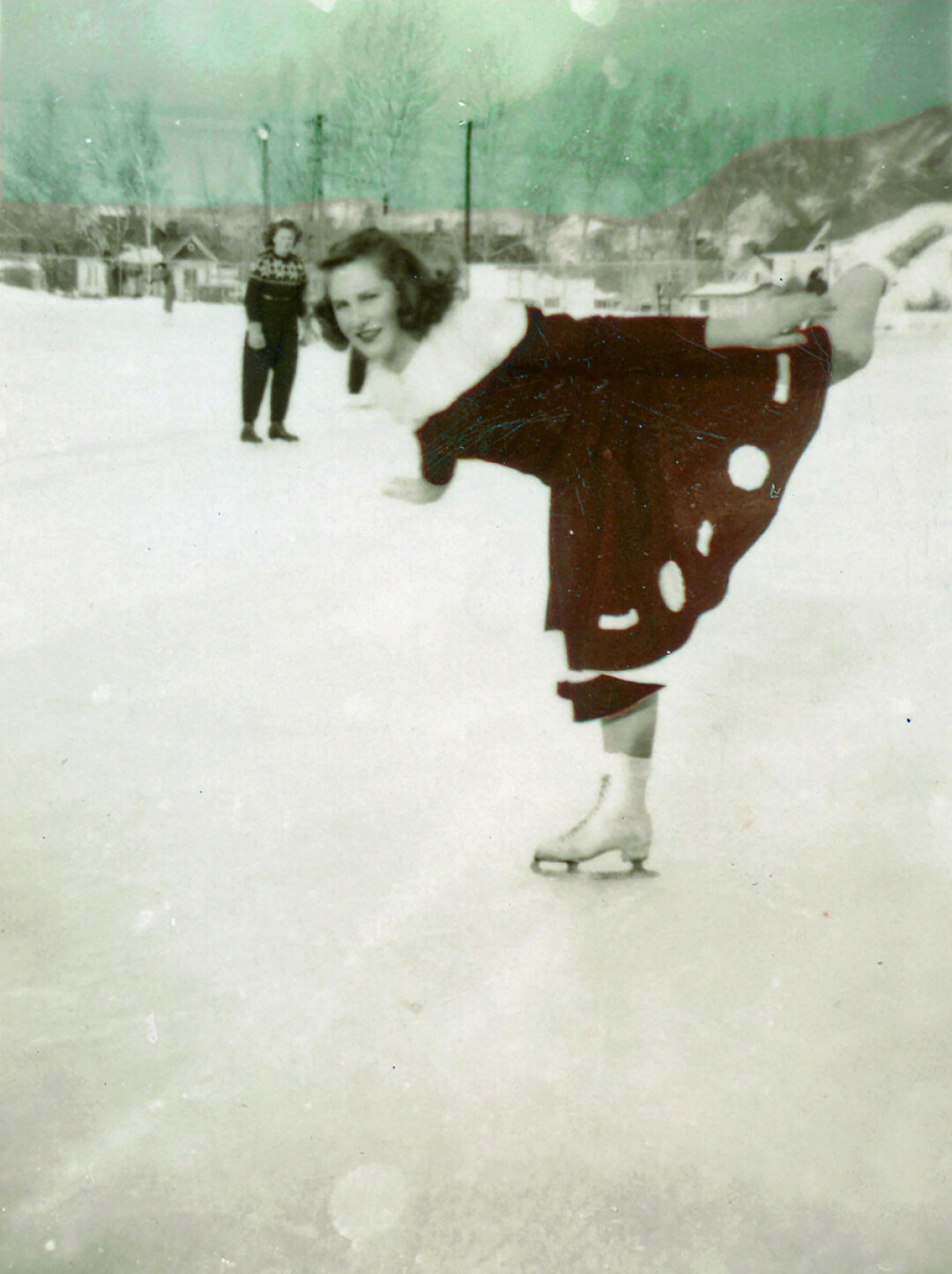 The large sunken area designated for the ice rink at Beall Park was excavated in the western half of the grounds, behind the new building, which served as a warmup spot for ice skaters. Though just a low-lying grassy area in summer, this shallow pit was transformed in the winter with the help of thousands of gallons of water. Like it does today, ice rink construction in the mid-twentieth century depended on weather, and required periodic maintenance to keep the surface smooth and clear.

Beall’s ice rink wasn’t the only slippery surface in the area. Maggie Caven Heisick lived on Bozeman’s north side and related memories of trips to the rink at Beall Park in a 2003 oral history interview. “Sometimes in the winter we could put our skates on at home and ice skate down to Beall Park. On the street! Go ice skating. It’s all free now, but then, we bought a season ticket for a dollar and went down, and the old stone building was the warming house, where we would put on our skates and go in.”

The counterpart to Beall Park, Southside Park, provided ice skating fun on Bozeman’s southwest side and also featured a warming building. For decades, young people flocked to Southside’s ice rink in the wintertime for fun and socialization. Local resident Naomi Pace Johnson grew up in Bozeman and frequented the rink at Southside Park, where she became an accomplished skater. She and her friends spent hours there, perfecting their technique. In a 2003 oral history interview, Naomi admitted she became hooked on ice skating as a child, despite sub-par skates. “Well, the equipment wasn’t very good. I learned to ice skate on roller skates on the ice...[my] cousins had a farm out on Durston; there was a pond there and we’d all go out… we would take turns with the clamp-on skates. And the rest had roller skates, and it was rough and it was pretty easy to roller skate because it wasn’t slick. But the ice skates were something that I just fell in love with and wanted, so I went to the Montgomery Wards catalog and got me a pair of ice skates.”

Both Beall and Southside ice rinks provided hours of entertainment within easy access to children living in neighborhoods on either side of Main Street. In 1958, the city published the City Plan for Bozeman, Montana, which outlined current and future projects and infrastructure. In the segment on city parks, the publication reported that ice skating was a major part of winter recreation. “The attendance records for 1956-57 season show an attendance of 7,714 at Beall Park, and 14,765 at South Side Park, with a total of 60 days of operation.” These figures work out to average approximately 128 skaters at Beall and 246 at South Side per day in the mid-1950s. Without a doubt this was a popular pastime.

If ice skating wasn’t thrilling enough, or one just needed a change of activity, sledding did the trick. Enjoyed by sledders for over one hundred years, Peets Hill is undoubtedly Bozeman’s most famous sledding hill. The site takes advantage of a steep hill on the northern end of a long ridge on the city’s southeast side, which historically has served as an informal boundary between city life and open farmland to the east.

What is today known as Peets Hill and Burke Park, along with the ridges, gullies, and streams in the Highland Glen area to the east, are rich in history. Historical evidence suggests indigenous people frequented this area. With the establishment of Fort Ellis to the east in 1867, soldiers and townspeople regularly traversed the hills and gullies. In 1872, Sunset Hills Cemetery was established on the beautiful ridge overlooking the city. In the early 1890s, investors made an attempt to develop the land on the ridge for housing. They named their planned subdivision Electric Heights but the development fizzled, probably due to the steep slope and lack of accessibility.

The name Peets was adopted from local businessman, dairy farmer, and landowner John M. Peets. After a career in the grocery business in downtown Bozeman, Peets turned to dairy farming and pastured his cows on property extending from South Black Avenue eastward. A small white granary still graces the foot of Peets Hill, a remnant of John Peets’ dairy farming operation. Though on private land, the sledding hill on the north end of the ridge was too good to pass up, and locals began using it at least as early as the 1910s. A 1985 Bozeman Daily Chronicle article quoted local resident Polly Renne’s letter to the editor. Polly had fond memories of hauling her “Flexible Flyer over there for breathtaking rides down the hill.” John Peets and his family generously allowed children and their families to enjoy the hill, and it became a local landmark.

Ten years after John Peets passed away, his son Earl offered the sledding hill to the city of Bozeman—for free. The city was unable to accept the offer, and the land was eventually sold to the Burke family. Generous and community-minded like the Peets had been, the Burkes continued to allow local children and families to use the sledding hill. Concentrated efforts to purchase the recreation area began anew in the 1980s. Thanks to the hard work of involved citizens like Al Abelin, Peter Clark, and Polly Renne, and the Gallatin Valley Land Trust, the sledding hill became city property in 1993. Soon after, a campaign began to transform the old Peets granary at the hill’s base into a warming hut for pedestrians, bicyclists, and sledders. Today, the restored granary has a new life as a unique warming shelter. 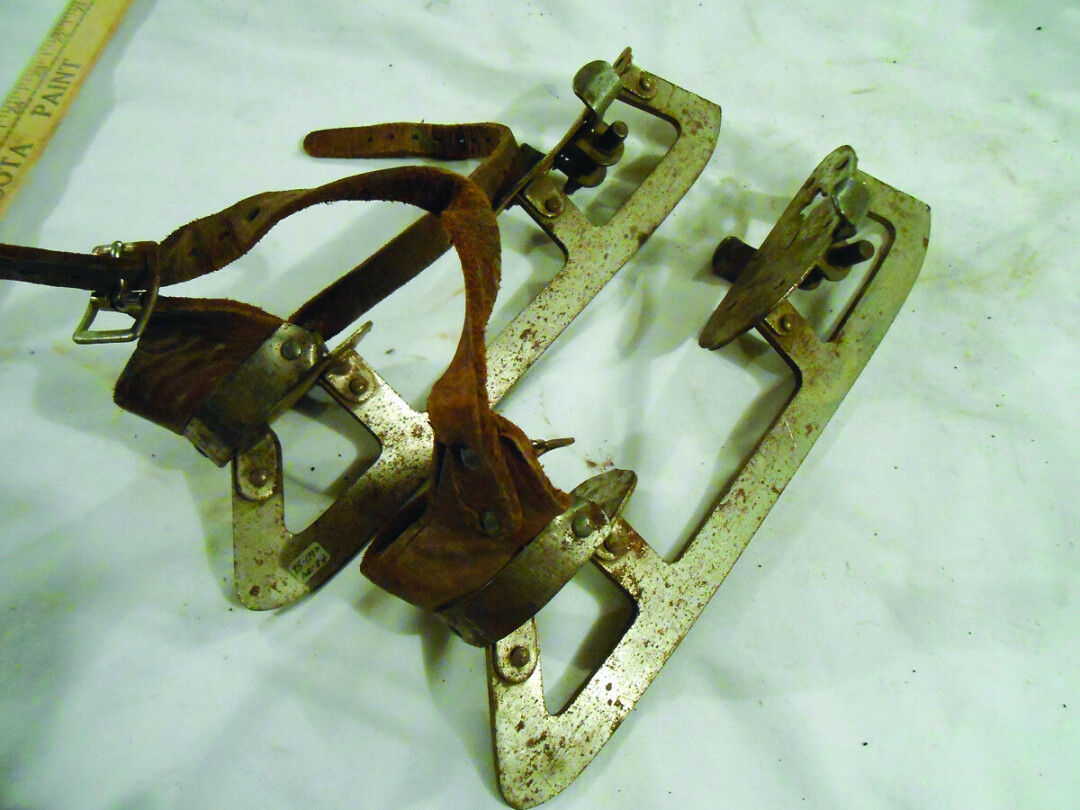 Of course, our community is home to many other beloved ice skating and sledding venues, including the sledding hills located along Highland Blvd. and at Gallatin County Regional Park, and the ice rink at Bogert Pavilion (completed in 1977). So, this winter, take advantage of our local parks, and make your own memories on Bozeman’s legendary ice and snow.