On Being In One's Element

My whole life, I’ve been on a first-name basis with the rain. I know it intimately and directly, like gravity or my own breath, and therefore trust it. It is the only element I inhabit without hesitation or self-consciousness. It is, in fact, very often what I mean when I use the word home.

Snow, by contrast, is still a stranger to me, even as I’ve been in the frigid north since leaving Portland in 2009. On any given winter—not to mention spring—morning, I may be found staring out the window once again in disbelief that the snow has stuck around another day. I do not deny the stark beauty of it, nor the recreational opportunities it brings. But while I may appreciate them, these are not my beauties or my opportunities. My loyalties remain with the rain, but there’s only so long you can nod at a stranger before you introduce yourself. I decided this December, not for the first time, to approach the winter and find out if we might be friends. This is maybe a long way of saying that I went for a run the other day, but the run itself was a long time coming. 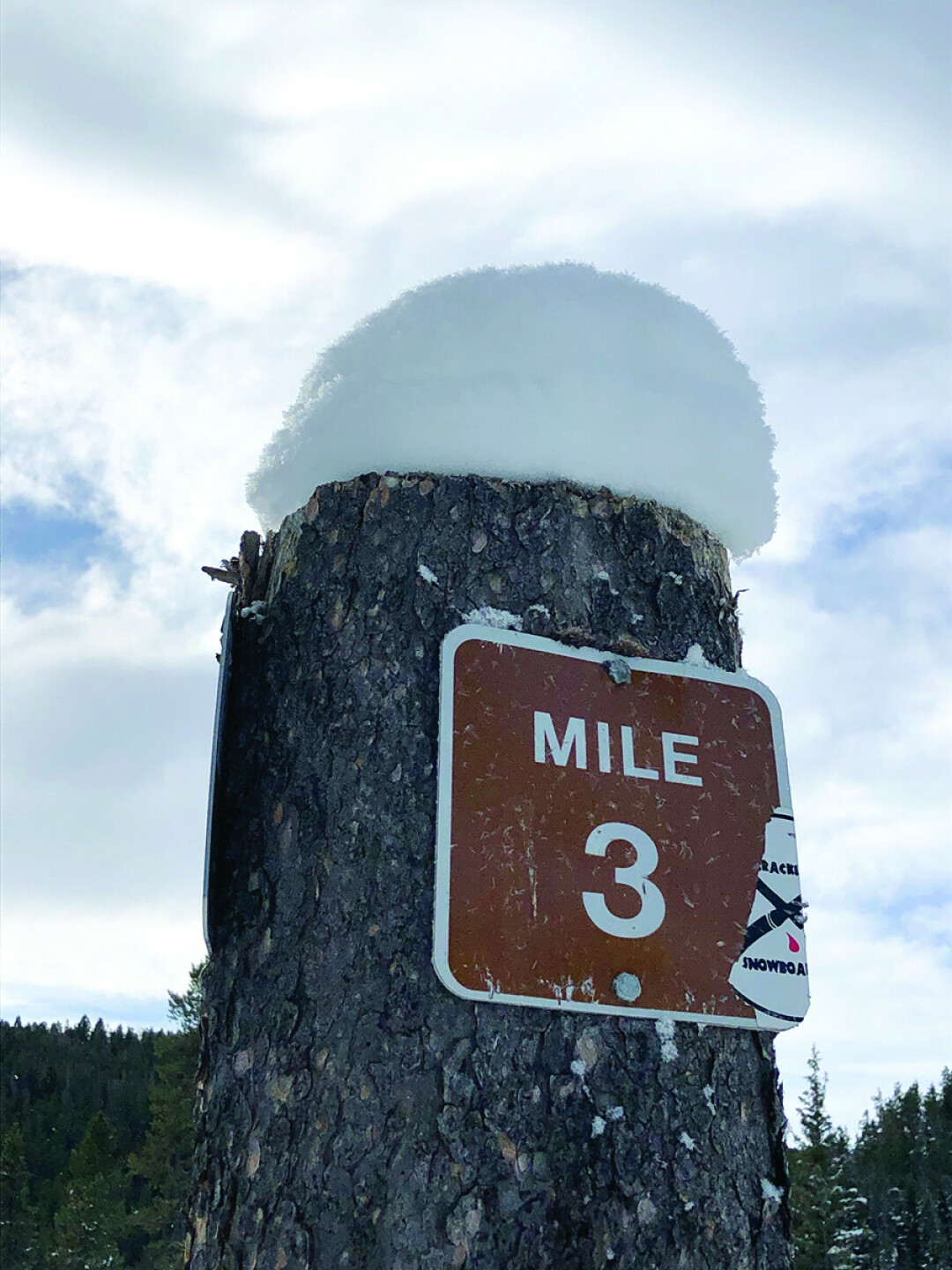 The winter and I didn’t get off on the best foot. No sooner had I put on my dorky spandex running pants and rummaged through a box in the garage until I found the ice cleats MSU had issued me a few winters ago and that sort of fit over my shoes than my wife, Sandy, asked me how cold it was outside. I told her I didn’t know and wondered why it mattered. According to the internet, she told me, it wouldn’t be good for my lungs to run when the temperature was below fifteen degrees. Rest assured, nothing good ever comes of Sandy reading articles on the internet. We checked the temperature. It was ten degrees with a windchill of six. She asked me to wait until it was warmer—my asthma and so on—ideally after Christmas, when I might be on the receiving end of a pair of warm gloves. But there was a job to be done—no time to wait for warm gloves. I told Sandy I could wait for warmer weather but that my deadline was looming.

On the brink of that deadline, with the temperature approaching twenty, I put on two pairs of lightweight running gloves, along with the rest of my hodgepodge of inadequate gear, and drove over to Sourdough, where I opened the car door to be confronted with clouds of smoke like I had somehow woken up from the dream of winter to find myself smack in the middle of September.

Nevertheless, there I was, and off I went. Half a mile in, the smoke growing thicker, me growing less and less sure of this excursion, I came to the source: a smoldering slash pile of debris like a small volcano, where the logs from last fall’s thinning of the forest had been stacked, an eerie juxtaposition of fire and ice I observed from the relief of the windward side. As I left the burn behind, the air quickly cleared, and I thought maybe the run I was hoping for was about to begin.

I fully admit to being the kind of runner who romanticizes the sport, at least when it is practiced outdoors, where you can find me communing with nature, confronting the sublime, or struggling heroically against my limits—you name it, and I’ll be there trying to have a moment. Which was a lot of pressure to put on trudging up a hill in the snow, flexing my hurting cold fingers. Sometimes even I must admit that a run is just a run, and that the gym-goers of the world at least have the advantage of full feeling in their extremities. Thinking such thoughts, I might even have turned around and waited for May. But, like I said, there was a job to be done. For the sake of journalism, I continued.

I’m sure you know what it was like up there. Snow and more snow, skiers and their dogs, the clouds of my exhales dissipating before my eyes, all sound absorbed into the muffling covering of accumulated snow. Nothing to sneeze at, but neither anything I needed to stick around for when I could just jot down a few impressions and beat a downhill retreat to the warm car.

But when I got up a couple miles and the trail started opening up over the creek and the sunlight was shining through the treetops with increasing regularity, I figured I’d go a little farther. Pretty soon, the trail started to flatten out, the fact that I’d barely run since my marathon two months ago started to feel insignificant, and I picked up my pace ever so slightly. The skiers I was passing on the way up would pass me on the way down, but so what; right now I was feeling pretty good. It wasn’t cold running or winter running or snow running, it was just running, the same kind of running I’ve been doing for a quarter century. My body knew what to do, and I was remembering why I do it and why I love nothing more. 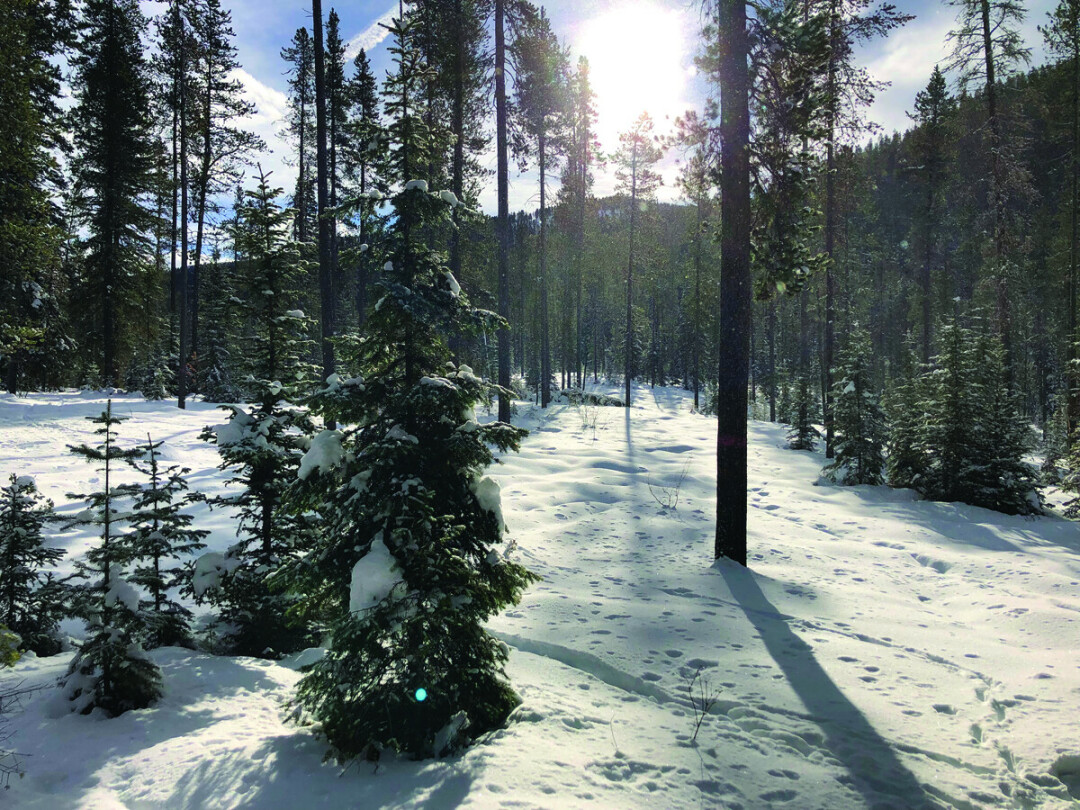 I knew I could go on a long way like this, watching the sunlight sparkle through a flurry of snow whenever a gust of wind announced itself. Sometimes a run gets easier the farther into it you go. This was turning into one of those runs. Eventually there came the tug of responsibility—papers to grade, children to take care of, this article to write—but for a while there, I felt it: the temptation to run forever into the snowy mountains, run myself toward an exhaustion that would never come.

The way down was fast and easy. I felt fine, like it was nothing out of the ordinary, this running in the snow. But the closer I came to the car, the less inspired it felt. Whatever I was approaching up there before the turnaround was still up there. It hadn’t followed me down. It rarely does. And those things we leave behind when we go into the woods—responsibilities, stress, noise, and all the rest—they’re there waiting for us when we return.

I haven’t yet succeeded in making friends with the snow, but give me time; it’s only been thirteen years since I left the rain. Never mind that, though. I don’t need to be at home in the snow. I need only to be respectful of it. To adjust to the temperature, to get a pair of warm gloves, to interact with the world as I find it, to let it take me to the same places the rain always has: that place that is always just a little farther down the trail, a place that, like Zeno, we can approach indefinitely but never—thankfully, thankfully—arrive at.

Scott F. Parker is a freelance writer and the author of Run for Your Life: A Manifesto, among other books.