One of the joys and privileges of living in Bozeman is sharing the landscape with an array of amazing wildlife. Great horned owls, sandhill cranes, foxes, raccoons, deer, and many other species frequent our parks, fields, and trails and enrich our community. Larger species, including elk, moose, wolves, and mountain lions, are a key part of what makes the Greater Yellowstone region unique in the lower 48 states.

Of course, living alongside wild animals can occasionally give rise to conflict. In town, perhaps our most conspicuous — and conflict-prone — wild neighbors are bears. Black bears reside year-round in the mountains and foothills around Bozeman, and grizzly bears are expanding into nearby areas where they have not been for decades.

Most of the time, bears try hard to avoid people and rely on natural foods such as roots, rodents, berries, and grasses. However, some bears venture into residential areas, especially at this time of year, when they desperately seek to consume 20,000 calories a day in order to pack on pounds for the winter. Barbeque grills, bird feeders, fruit trees, dog food on porches — all are enticing to a sense of smell considered one of the keenest in the animal kingdom.

One of the most irresistible lures is garbage. To hungry bears, waste bins full of food scraps, wrappers, and other smelly items are the olfactory equivalents of flashing neon signs. When standard trash bins are left out on the curb, especially at night, they become easy targets for investigating bruins. But the mouth-watering morsels inside are also dangerous. Bears can cut their gums and paws on glass and metal, ingest harmful plastics, or get their heads stuck in containers. 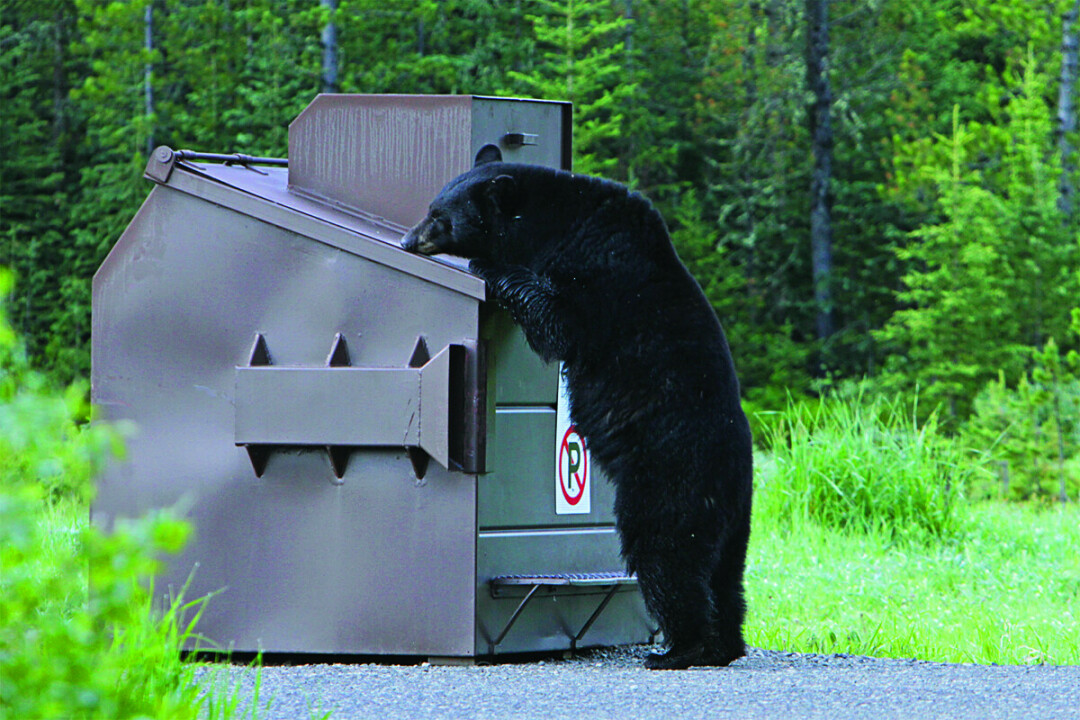 Even worse, after spending time near human developments, bears can lose their natural fear of people. Sadly, when bears become habituated to humans, wildlife managers may be forced to kill them as a last resort. Just last month, wildlife officials killed a bear in Bozeman after he fed on unsecured garbage and did not react to hazing efforts.

Relocation is a possible alternative to lethal removal, but bears are highly intelligent. Once they discover how to obtain a high-calorie, low-effort food reward, it can be extremely difficult to deter that behavior in the future. Last year, nine bears were killed in Bozeman due to habituation and food conditioning, according to state wildlife officials.

To prevent this, the City of Bozeman recently announced a pilot program to offer 96- and 65-gallon bear-resistant garbage cans to residents in designated neighborhoods with higher levels of human-bear conflict. The bins are compatible with the city’s solid waste trucks and have been certified as bear resistant (no such products are considered bear proof) by an association of tribal, federal, and state wildlife agencies. Our organizations have appreciated the opportunity to work with the city in developing this program to keep both people and bears safe.

If you are in a neighborhood covered by the program, you can request that your regular waste bin be replaced by a bear-resistant bin for $5 a month in addition to your current tote charge. To find out if these bins are available in your neighborhood, and to learn about other ways you can coexist with bears, visit https://www.bozeman.net or call the city at (406) 582-3236. Depending on community interest and funding, the city will consider expanding the program into more neighborhoods in the future.

In launching the program, the city joins Bozeman’s two private waste removal companies: L & L Site Services and Republic Services, both of which offer bear-resistant bins. If you are a customer of L & L, you can call (406) 388-7171 to request a bear bin. Republic customers can call (406) 586-0606.

We applaud the city and its private waste haulers for making bear-resistant garbage bins available in our community. These important programs help keep people safe and bears wild, and make all of us better neighbors.

Zack Strong is a senior staff attorney for the terrestrial wildlife program at the Animal Welfare Institute. Bonnie Rice is the Greater Yellowstone/Northern Rockies senior campaign representative at the Sierra Club. Blakeley Adkins is the Volgenau Foundation wildlife conservation associate at the Greater Yellowstone Coalition. They all live in Bozeman.