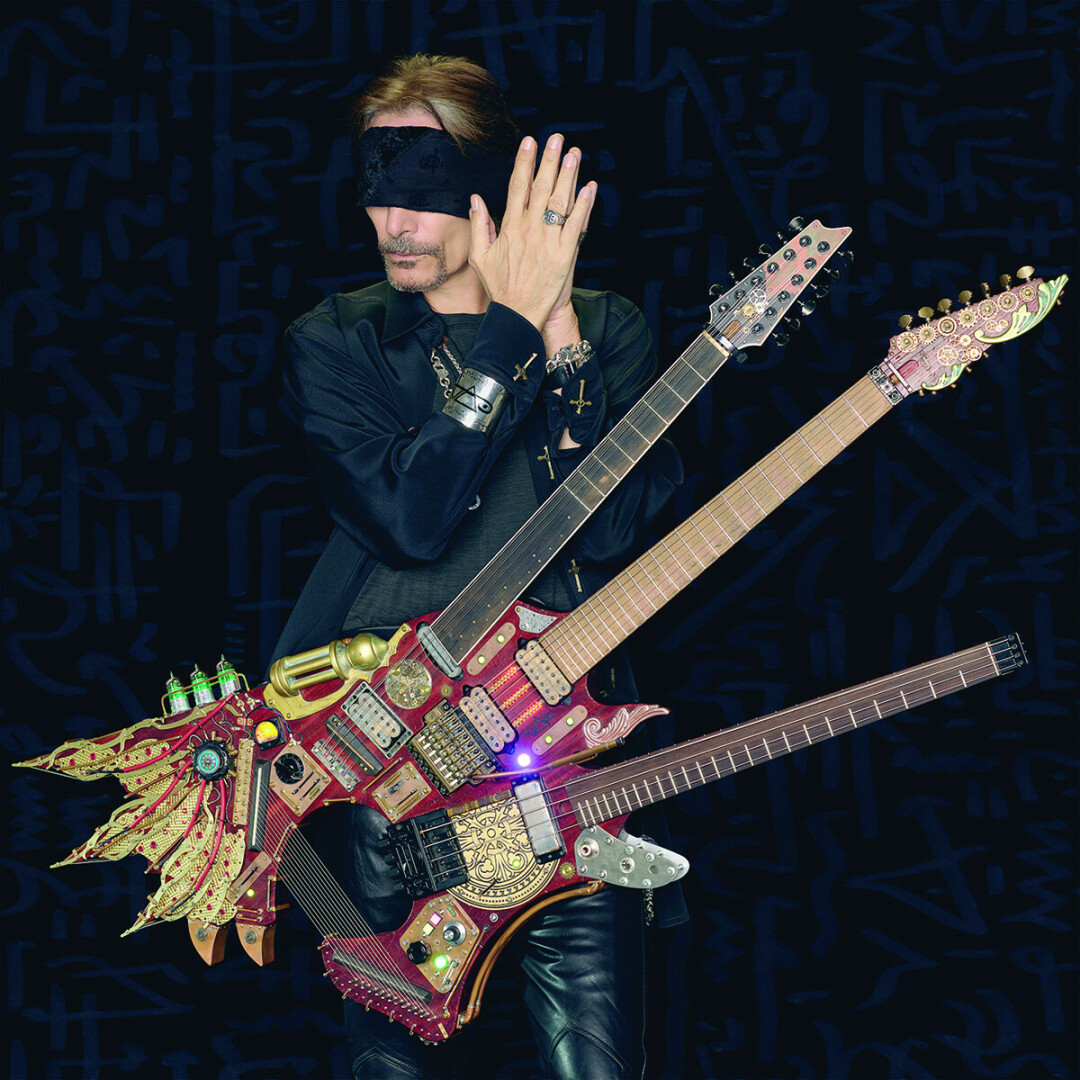 A virtuoso guitarist, visionary composer, and consummate producer who sculpts musical sound with infinite creativity and technical mastery, Steve Vai has awed fans of all genres with his exceptional guitar skills and musicianship for decades. At age 12, he started taking guitar lessons from Joe Satriani. At 18, he began his professional music career transcribing for, and then playing with, the legendary Frank Zappa. More than three decades, over 15 million in album sales, and three GRAMMY Awards later, Vai has proven himself, in his own right, to be one of music’s true originals.

Vai’s work has been recognized with a long list of awards and honors, including over 15 from Guitar Player magazine alone. His career accomplishments have earned him honorary doctorates from Berklee College of Music and Musicians Institute. The 2016 Long Island Music Hall of Fame inductee was voted the 10th “Greatest Guitarist” by Guitar World magazine and consistently lands among the best in various lists of the top guitarists of all time. In 2012, the TEC Foundation honored him with the prestigious Les Paul Award, created in 1991 to salute those who have set the highest standard of excellence in the creative application of technology. Past winners of the Les Paul Award include Paul McCartney, Neil Young, Herbie Hancock, Steely Dan, and Bob Clearmountain. In bestowing it on Vai, TEC noted, “Steve Vai’s sheer breathtaking facility on the guitar is acclaimed in the rock world and beyond…Vai has dedicated his talents to creatively advance the language of music. While many artists fit easily into a single category, Steve Vai remains unclassifiable. He is a musical alchemist of the highest order.”

Vai has toured the world as a solo artist, as a member of G3, Generation-Axe, and with Frank Zappa, David Lee Roth (just after Roth left Van Halen), Alcatrazz, and Whitesnake—at the peak of its popularity. Vai’s full discography encompasses more than 60 albums, including many with Zappa, others from stints with Roth and Whitesnake, as well as live releases, collaborations, compilations, and orchestral works. Highlights include 1990’s groundbreaking Passion and Warfare, and 2007’s Sound Theories Vol. 1 & 2, performed with the Netherlands’ Metropole Orkest. Vai’s other orchestral compositions include “The Middle of Everywhere,” which had its world premiere in 2011 with the Noord Nederlands Orkest. The orchestra’s director, Marcel Mandos, said of Vai’s work, “Steve Vai’s music can easily compete with that of famous contemporary composers.”

To commemorate the 25th anniversary of his landmark album, Passion and Warfare — highly regarded as one of the greatest instrumental rock guitar recordings of all time — Vai released Modern Primitive/Passion and Warfare 25th Anniversary Edition in 2016. The release, which included previously unreleased material, was celebrated by a very special 100+ date world tour in which he performed the entire Passion and Warfare record live from top to bottom for the first time. Vai and his band hit Europe, the U.S., South America, and Mexico. 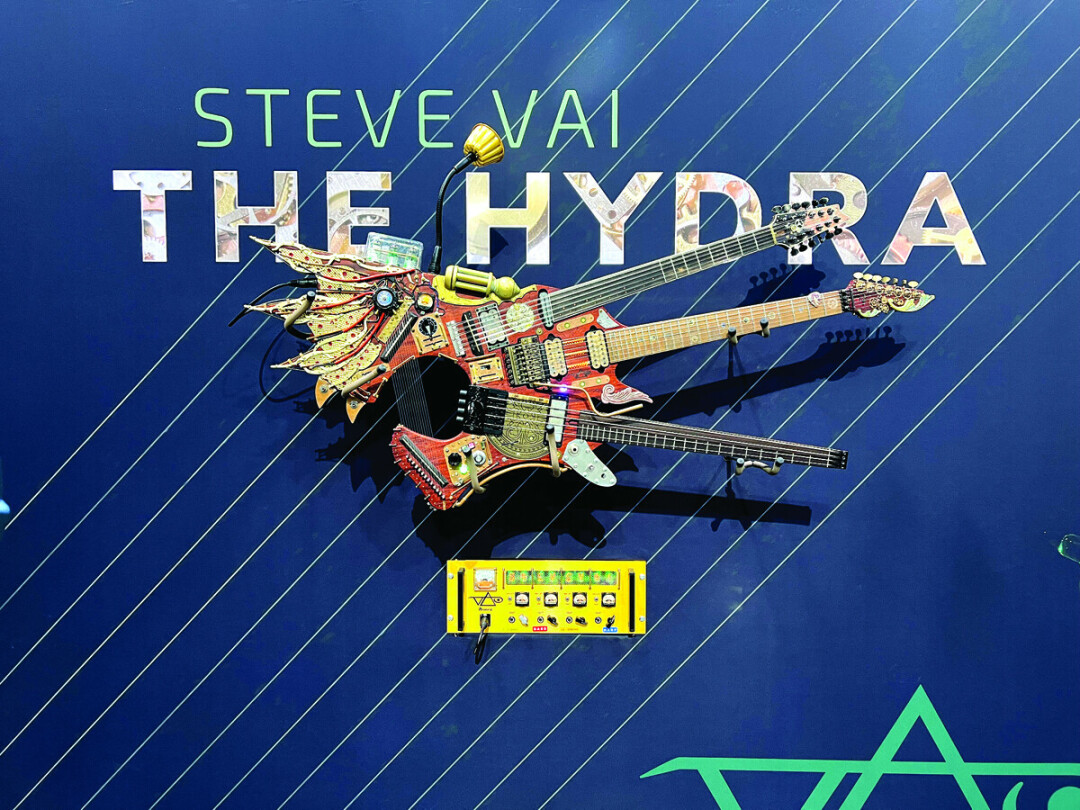 In addition to his solo tour work, Vai is known for his creative live performances with orchestras around the world and for projects such as Vai Academy (the next installment of his guitar camp, typically held every 18 months:  Vai Academy 6.0 will take place in August 2022), Alien Guitar Secrets master classes, and Generation Axe — a unique combination of five fiercely talented guitar players in which he currently tours internationally with Zakk Wylde, Yngwie Malmsteen, Nuno Bettencourt, and Tosin Abasi. Generation Axe finished an extensive second U.S. tour in November 2018 and embarked on a second tour of Asia during the fall of 2019.  The supergroup’s first recording, The Guitars That Destroyed The World: Live In China, was released June 28, 2019 via earMUSIC as a CD digipak, limited colored 2 LP+download and digital. The record culls performances from Generation Axe’s 11-city run in Asia in 2017.  In August 2020, Generation Axe was joined by very special guest Brian May for a virtual jam session to play the iconic Queen song, “Bohemian Rhapsody” during an AXS-TV special called At Home and Social with Nuno Bettencourt & Friends.  The show raised funds for the Music Forward Foundation’s Crew Nation initiative that supports touring and venue crews who suffered due to the coronavirus lockdown.

In the summer of 2018, Vai completed perhaps one of his biggest undertakings yet, putting together and hosting a 53 1/2-hour-long jam (happening over consecutive hours) called the Big Mama-Jama Jamathon in Hollywood, CA, to benefit Extraordinary Families. The unprecedented jam included many hours of performances from Vai as well as the likes of Al Di Meola, Orianthi, Dave Navarro, Dweezil Zappa, Lee Ritenour, Steve Morse, Nuno Bettencourt, Tosin Abasi, Vernon Reid, Derek Smalls, Moby, and hundreds more. The jamathon raised over $100,000 for Extraordinary Families, a leading nonprofit foster family, adoption, and advocacy agency dedicated to improving the daily lives and long-term outcomes of children and youth in foster care. Vai also sits on the board of directors of this charity.

Vai’s signature instruments include the groundbreaking Ibanez JEM guitar, which he designed in 1985 with first-of-its-kind features at that time, including a 5-way phase aligned pickup selector,  24-fret neck and deep cutaway, the floating tremolo and the monkey grip. The JEM, which debuted in 1987, is now one of the longest running, most successful signature series guitars in history, and for over a decade its sister model—the RG—is at times second in worldwide sales only to the Fender Stratocaster. Also for Ibanez, Vai designed “The Universe,” the first commercial 7-string electric guitar — an instrument that inspired a revolutionary metal subculture that started in the mid ’90s.  In January 2020, Vai unveiled a striking brand-new guitar:  the Ibanez PIA, which “takes the most iconic elements of Vai’s JEM model and amps them up into an S-style electric perfect for modern players in 2020,” according to Guitar Magazine. The guitar’s moniker stands for Paradise in Art.  There’s a second personal meaning as well (Pia is Vai’s wife’s name).  Among his many other innovative collaborations with equipment manufacturers, he designed the Steve Vai Legacy V3 series of all-tube amplifiers with Carvin Corporation.

In 1998, Vai established (with Ruta Sepetys) the Make a Noise Foundation to provide instruments and music education to young musicians without means. “Music educates the whole person as an integrated individual. It educates the mind, the senses, and the emotions,” says Vai. “Those interested in music should not have to sacrifice their ability to develop important skills and express emotions due to limited financial resources.”

In 2019, Vai released Vaideology: Basic Music Theory for Guitar Players,  a comprehensive music theory book catered to the needs of virtually any aspiring musicians, but focused on guitar players. The immediate success of this book in its first day of release, along with the forthcoming translations into various world languages, points to this book becoming an historical classic.

During the worldwide pandemic in 2020 and 2021, Vai has been focused on creating new music at The Harmony Hut, his home studio in Encino, California, including recording an acoustic record (a life-long realization) and a new instrumental electric record.  He hosted two popular livestreams in a series spanning several weeks:  Alien Guitar Secrets Live:  Music and You, in which he offered insights into the guitar, music, his career and the music business and Under It All where Vai focused on more esoteric life principals and topics.  Ever pushing the envelope, in celebration of his birthday, on June 6, 2020 Vai debuted “Candle Power”—a new song and performance video—which is the first composition to showcase his innovative and acclaimed “Joint Shifting” Technique, where, according to Vai, “you bend a note while fretting another, but I wanted to do this technique with a combination of double and triple stop single note bends while fretting other notes and releasing bends.”  On March 12, 2021, while recovering from trigger finger and shoulder surgery Vai offered up a video performance of a new composition called “Knappsack” played with just his fretting hand (his picking hand was firmly fastened in a sling behind his guitar) wielding his Ibanez Onyx Black PIA guitar. Guitar World Magazine called the performance “a scorching playthrough that would be near-impossible for most players with two fully functioning hands.”  Vai is gearing up for a far-reaching, 250-date world tour set to begin in 2022.  The tour will include a break to record four hours of his orchestral music in Europe with the Metropole Orchestra and the Danish National Radio Symphony Orchestra.