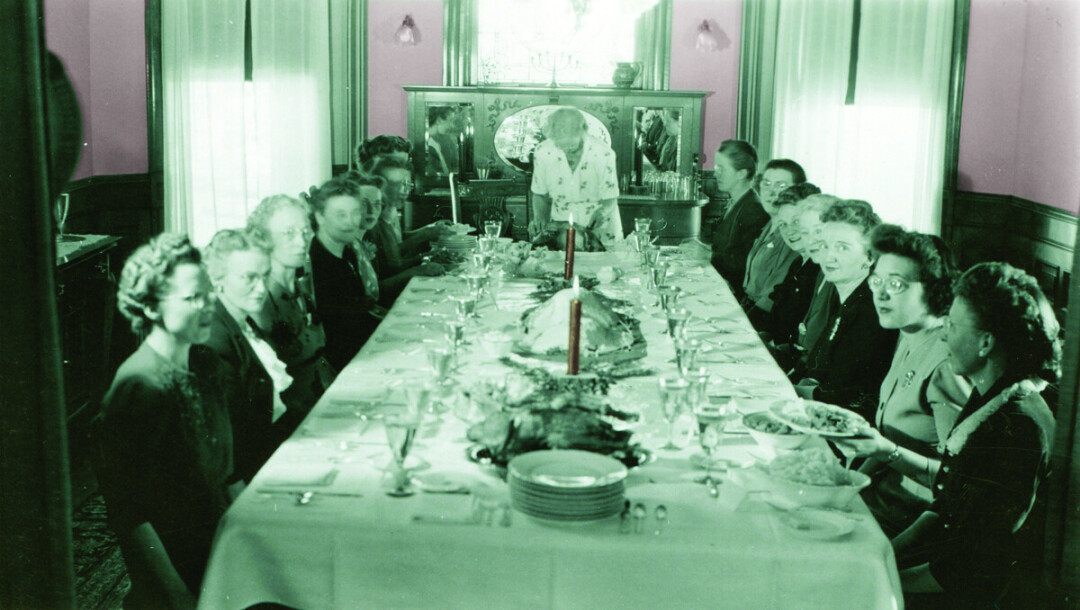 Food is one of the highlights of the holiday season. Many families have a favorite meal, dish, or dessert they look forward to each year. Today, it is a snap to hop in a car, drive to one of our many grocery stores, and find the ingredients needed for that special recipe. One hundred years ago, ingredients were limited, recipes were often simpler, and featured foods that could be easily acquired locally.

Early Bozeman resident Emma Weeks Willson kept a notebook filled with handwritten recipes from friends and relatives. Dated 1916, her cookbook is still treasured by the Willson family today. In 2018, Emma’s cookbook was digitized and made available online through the Montana Memory Project, allowing anyone to browse this piece of local culinary history. One of the recipes in Emma’s cookbook is for “Mrs. Donaldson’s Pumpkin Pie.” “Mrs. Donaldson” is probably Jean E. Talcott Donaldson, who lived in Bozeman in the 1890s and early 1900s. Jean was married to Reverend Robert M. Donaldson, minister at First Presbyterian Church in Bozeman from 1892 to 1895 and from 1902 to 1907. Emma Willson was one of the charter members of First Presbyterian Church, so it is likely the two women were well acquainted.

Jean Donaldson’s pumpkin pie shares the page in Emma’s book with recipes for lemon pie and chocolate cake. The page is heavily stained, suggesting that at least one of these recipes was a favorite. Many of the notated measurements are not exact, and bakers undoubtedly relied on years of experience to create the perfect dessert.

Milk and eggs, two of the main ingredients in this recipe besides pumpkin, would have been readily available to Emma Willson. In 1916, many households raised chickens and dairy cows. Even families in town could have access to fresh produce, butter, and meat from local farms. Bridger Canyon resident Ina Christie Denton grew up on a farm north of Bozeman, and in a 1975 oral history interview, she reminisced; “My mother used to make 100 pounds of butter a week. And dad would take it to town twice a week and peddle it to customers, the stores, the restaurants, and individual people.” Besides butter, the Christie family sold pork, chicken, geese, and eggs. Transporting eggs into town could be hazardous in a horse-drawn conveyance, and Ina remembered eggs packed securely in sawdust for the long trip.

Preserving ingredients like eggs and milk required a little extra work. Before refrigeration, iceboxes or the creek behind the house did the trick. Bozeman ponds provided ice to supply iceboxes year-round. In the winter, workers cut ice into blocks with giant saws, and stored the cold chunks in sheds insulated with sawdust. In the 1930s, Bridger Canyon ranchers Jane Forsythe and her husband, Evans, found harvesting ice for an icebox too difficult in the wintertime due to snow volume. In a 1975 oral history interview, Jane describes how she used the stream near their house for refrigeration. “Evans built a box in the creek, and the water ran through it, and that water runs cold, about 38 degrees, so it wasn’t too bad to keep everything cool. And we learned early to screen the holes through which the water ran, because Evans lost the whole batch of trout to a mink that came along.” When asked what she kept in the box in the creek (besides trout), Jane explained, “Well, milk. We milked a couple of cows, and the milk was set down there to raise cream.”

Many early local dishes featured fruits and vegetables commonly grown in southwest Montana, like strawberries, cucumbers, and potatoes. In the 1910s, Montana Agricultural College (now Montana State University), published a cookbook with recipes submitted by students, alumni, and faculty. Edna Bull, a 1909 graduate, shared the following frozen strawberry dessert, which would have been a good use of those bumper Gallatin Valley strawberry crops. 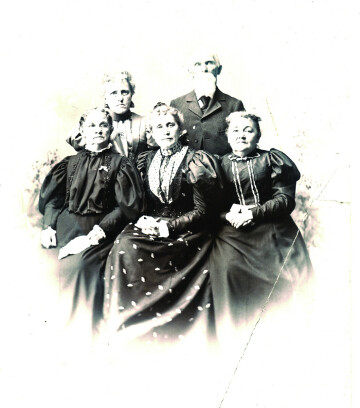 Cucumbers also grow well in southwest Montana, and one finds a variety of pickle recipes in early local cookbooks. In addition to canning and drying, pickling was an effective way of preserving food and recipes ranged from simple to complex. Olive Buell shared this easy dill pickle recipe in the Bozeman Woman’s Club Cook Book of 1925-1926.

Olive Hart Buell moved to Bozeman in 1907 with her husband, Hiram. Hiram served as the president of Security Bank and Trust Company, and also as mayor of Bozeman. Olive was heavily involved in local civic and religious organizations, including First Presbyterian Church, P.E.O., and the Bozeman Woman’s Club.

Potatoes were and still are a staple, and Emma Willson included a tasty potato recipe in her handwritten book that would have been a welcome addition to a holiday meal. It is unclear if this was Emma’s own recipe or one she obtained from a friend or family member. This easy dish could have been made entirely of locally grown and produced products. 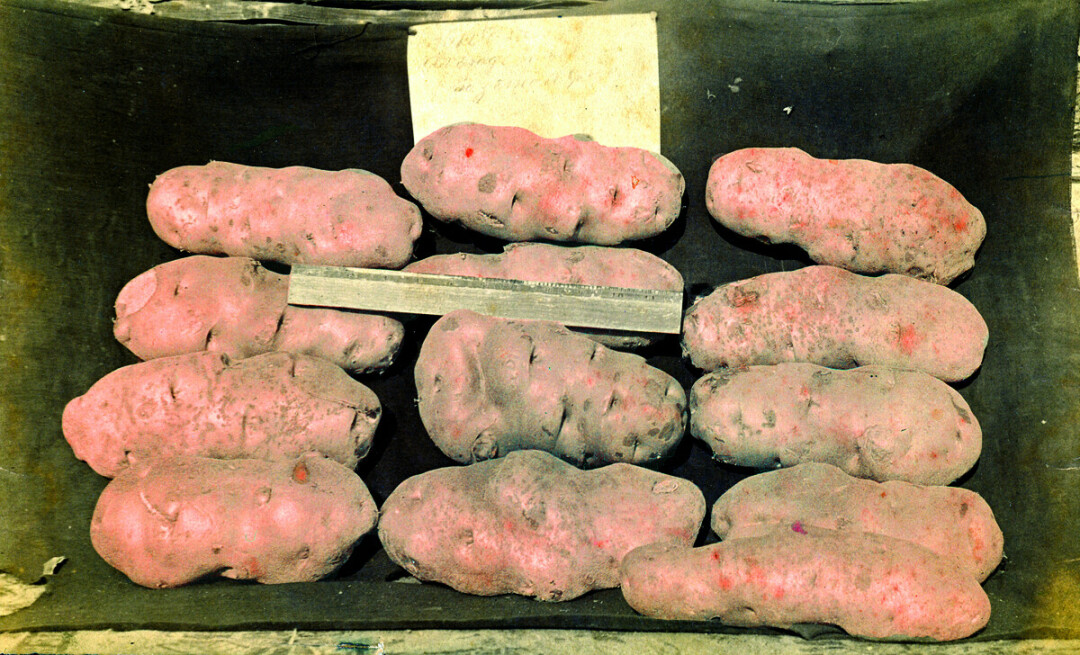 Cheese Potatoes
1 cup milk. 3 tablespoon flour. 1” butter.
Boil potatoes, let them get cold and cut in dices. Mix dressing all through them – put layer potatoes, then layer of grated cheese etc. On top layer put cheese and a few bread crumbs, and pieces of butter.

When you think of canning, fruits and vegetables generally come to mind. However, root cellars and pantries in many early twentieth century homes contained an abundance of canned meat. In a 1975 oral history interview, Eleanor McBarron Mast of Bridger Canyon explained, “The meat that was used was pork... and venison, because there were a lot of deer. In those days, you canned your meat instead of freezing it. I can remember putting down or canning about several hundred jars of venison. Well, venison can become very tiresome unless you learn how to cook it. So, the women helped me and I learned different recipes so I could have venison every day and still have something different.”

If a reprieve from venison was in order, local chefs prepared turkeys using methods similar to this recipe shared by Maude DeMuth Tallman in the Bozeman Woman’s Club Cook Book. Maude’s husband was Professor William Duane Tallman, who taught mathematics at Montana State College. He was married first to Anna DeMuth Tallman, who passed away in 1908. The next year, he married Anna’s sister, Maude DeMuth, and the couple lived in Bozeman for the next thirty-five years.

Turkey
Prepare your turkey for the pan. Salt and pepper and rub the outside with butter. Stuff with one of the following dressings. Sew up and put in a self-basting pan with one cup hot water in bottom of pan. Have your oven hot enough to brown your turkey, then lower your heat and cook slowly until done. Cornbread dressing – Use half cold corn bread and half stale bread crumbs, mix with 1 egg, lump of butter, small onion chopped, sage, salt and pepper to taste. Moisten with drippings of liquid in which giblets have been cooked. - Mrs. W.D. Tallman

Of course, there are some holiday ingredients that just can’t be grown, raised, or hunted in the Gallatin Valley. Local chefs depended on corner grocery stores to supply some essential ingredients for their holiday treats and dishes. Another intriguing recipe found in Emma Willson’s cookbook is titled “Belle’s Cranberry Jelly.” This is one of several recipes in Willson’s cookbook that is credited to “Belle,” who researchers believe is likely Belle McDonald, who was born in 1874 in Bozeman. She was the daughter of Richard and Mary McDonald, who traveled west by wagon and settled in Bozeman in 1864. The McDonalds were one of the first African American families to call the Gallatin Valley home, and they lived for many years at 308 South Tracy Ave.

Belle’s Cranberry Jelly
To 2 qts. berries an inch less than a qt. of water to a qt. of juice. A little less than that of sugar. Cook 10 minutes. Cook berries and strain.

Cranberries are not grown in the Gallatin Valley, so to prepare her jelly, Belle McDonald likely acquired the fruit from a local grocer. In the 1910s and 1920s, there were a variety of grocery stores in downtown Bozeman to choose from, including Forristell & Heilman, Lovelace Brothers & Co., F.A. Maxwell, and Thomas H. Rea and Company. Convenient corner grocery stores were also sprinkled throughout Bozeman neighborhoods. Lyon’s Cottage Market was on North 5th Ave., M.B. Hobbs kept a store on South 3rd Ave., and there were several more grocers located on Dickerson, Story, Tracy, and North Wallace. Neighborhood grocery stores flourished for several decades in Bozeman, and some locals may remember later family-owned shops like Evergreen Grocery, Wallace Street Grocery, College Hill Grocery, Cullen’s Corner Grocery, and North Side Market.

Many families have recipes that have been passed down through the generations, written on stained and faded recipe cards or in tattered books. Each chef may make their own adjustments to a recipe or be forced to find a substitute for an ingredient no longer readily available. Every December, my family and I attempt to recreate my great-grandmother’s fudge, which almost never turns out exactly like hers did. Perhaps my great-grandmother’s advantage was access to fresh cream, straight from the farm. Still, we have fun in our attempts, and always enjoy the memories. Best wishes for a delicious and historic holiday season.