Walking with spirits is something Elies Adams has been aware of since she was just seven years old, when she lived in Fort Benning, Georgia. After school one day, she went home with her friend Rebecca, and the washing machine turned on by itself. From the next room, the girls knew something was off—no one else was home, and it was strange and unsettling to both of them. On another visit to Rebecca’s house for a sleepover, Elies saw a picture of the Virgin Mary on the wall; Mary’s eyes were changing color, and also appeared dilated. Ever since then, Elies has been very curious about the paranormal.

In 2012, after ten years in Bozeman, Elies founded the Bozeman Paranormal Society, a group available to investigate paranormal occurrences of any kind. When they aren’t investigating, they host seminars, trivia, and, for the past six years, local ghost walking tours. When you join a PBS ghost walking tour, you’ll learn about the colorful history of Bozeman’s past residents, and hear reports from team members of paranormal activity in nearly a dozen downtown locations.

A very unique feature of the Bozeman Paranormal Society tours is that you are welcome to try your hand at a variety of ghost-hunting equipment. On average, a tour will use up to six forms of equipment to help detect energy. BPS team members carry cameras to shoot digital images as the group is stopped along the way. Digital cameras often capture balls of light, mist, and other supernatural phenomena.

I joined a BPS Ghost Walking Tour this past September with my 10-year-old daughter, a lover of Stranger Things. Elies keeps all Bozeman Paranormal Society events as family-friendly as the subject matter allows; about ten kids have taken the tour this year. We started our tour at the Gallatin History Museum, Bozeman’s first jail. Elies and Shawna, a BPS volunteer, posed questions to a ghost/spirit box, a device used for contacting spirits through radio frequencies. Nearly everyone clearly heard the box say, ‘Shawn,’ leaving us wondering if a spirit was calling Shawna by name. This happened again a little over halfway through the tour, when several people heard Elies’ name through a spirit box. Seth Danner was hung within the original jail in 1924, and is said to haunt the museum. (I myself had a strange experience while reading the information about Danner’s hanging in the museum. As my husband and I stood observing the location and reading the information, we both heard a rustling sound around the corner, I went to check to see if someone was there, and a piece of paper hanging on a bulletin board had fallen to the floor. Odd, and unexplainable.)

Moving further east down Main Street, we learned of more inexplicable tales from the Gallatin County Courthouse and the Baxter Hotel before moving on to what once was Bozeman’s red light/brothel district, beginning in the alley behind the Rocking R Bar. 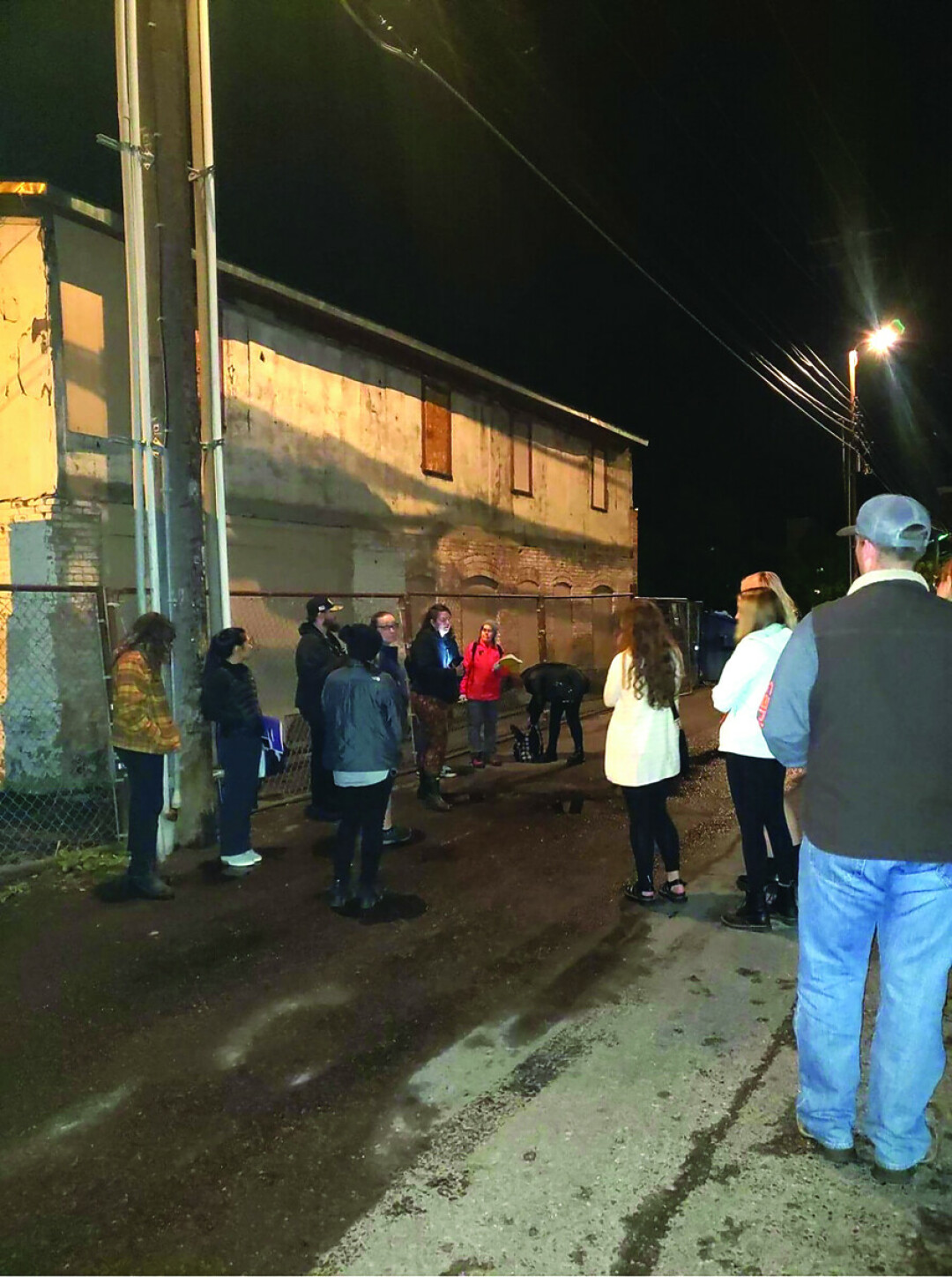 On this stop of our tour, we were offered ghost-hunting equipment to use; the first piece Elies held out was an EMF reader. My daughter eagerly put her hand in the air to be the first to give it a try. EMF readers detect electromagnetic fields; this device lights up when detecting surrounding/nearby energy fields. While we pointed the EMF reader around the alley, other participants were given infrared (Ir) temp guns, a thermal imaging camera, and dowsing rods. Ir temp guns take the temperature of the area—spirits are detected when a negative change of 5 to 10 degrees occurs. Dowsing rods, or pengliums, are handheld energy-based communication tools. Elies gave a demonstration of the dowsing rods, showing how they respond to questions: when the rods are crossed, it indicates ‘yes,’ while an open position indicates ‘no.’ She had asked whether we were joined by one of Bozeman’s most infamous madams, Kitty Warren. Joshua, a deaf BPS team member, communicated to my daughter and me via his phone that, although he cannot hear, he is able to silently/telepathically ask a question with the dowsing rods and get an answer. We got our chance to use them, and we did get open and closed responses.

Soon, we were at one of the most historically active locations on the tour, Gallatin Masonic Lodge 6, in its current location since 1880. Elies has had many odd things happen while giving tours at this location, and is one of the only women ever allowed in the building. She and a small group of women were allowed to investigate the Lodge, they captured an EVP (electronic voice phenomenon) of a woman crying during their investigation. Carnegie Libraries nationwide were in juxtaposition to red light districts, with hopes of educating men and steering them away from the brothels. Instead, the opposite happened; women frequented the library and educated themselves.

Next on our tour was the Bozeman Hotel, where it is known that nine people have died over the years. This building was busy while we visited. Elies used dowsing rods to ask some questions, including, “Do you want to talk to us?” and, “Do you like it when it’s quiet?” Both received a crossed, ‘yes,’ response.

Across the street at the Eagles Lounge, stories of items moving on their own and mysterious footsteps have been reported by bartenders and other employees. We stood directly in front of where the Bozeman Opera House once stood to learn about this part of downtown’s history. Theatres and opera houses are known for having strong paranormal activity, and in Bozeman, it is no different. When we arrived behind The Rialto, Elies relayed her experiences while investigating: blue lights, cold spots, and apparitions have all been reported at The Rialto. It is believed by local ghost hunters that Pablo Elvira, whose star appears in front of the Ellen Theatre, haunts The Rialto. Pablo lived in Bozeman until the early 2000s; friends in town have felt his presence since his passing.

Masonic Lodge 18 may be even more haunted than its rival Lodge, 6. This site has been detailed in the book Haunted Montana, by Karen Stevens. The activity here is so strong, the entity has been given a name; “Charlie” is known to walk around often. Music has been heard, and blue balls of light, along with multiple apparitions, have been seen at this location. The Lodge went through a large remodel in 1950, and again in 2014, causing quite a stir among the spirits here.

Elies recounts her best experience from a downtown tour: The group was sitting near the Emerson Center when she heard a man’s voice that sounded very close. No one else heard it, but shortly afterward, everyone turned toward the sound of footsteps running toward them, yet no one was in the area.

My experience of the BPS Ghost Walking Tour was a lot more enlightening than spooky or creepy. While having the supernatural factor, the historical tour of downtown Bozeman at night was exciting and fun. Bozeman Paranormal Society amps it up in October with their inaugural Big Sky Paranormal Conference at the Opera House Theatre in Philipsburg October 1-2. Paranormal investigators from around the state will convene for an overnight investigation and paranormal-themed panels. In Bozeman, there will be two Cemetery Evening Tours, October 14 & 15 at 9 PM. The cost is just $5; tickets are available on eventbrite.com/. In Belgrade, BPS will host their annual Zombie Walk at Lewis & Clark Park on October 14 from 4-8 PM. All zombies are encouraged to meet at the park; a guide will lead the group around the block for candy and more. Anyone interested in the paranormal is invited to attend a Bozeman Paranormal Society event. Check the Bozeman Magazine calendar, the BPS Facebook page, or visit https://bozemanparanormal.com/.