The Bearded Lady Project: Challenging the Face of Science

The Bearded Lady Project began as a joke that incited a documentary film, which expanded into two documentary films, a touring portrait exhibition (currently on display at the Smithsonian’s National Museum of Natural History), a coffee table book, and a scholarship fund supporting the field research of female paleontologists.

In 2014 Dr. Ellen Currano, a paleontologist at the University of Wyoming, and Ohio film director and producer Lexi Jamieson Marsh met for dinner. Both were frustrated with the way they were treated within their professions in traditionally male-dominated fields. To lighten the mood, Ellen suggested putting a fake beard on her face to “finally be able to do her job” and fit the mold. To her surprise, Lexi took that suggestion seriously and ran with it. The next morning, the two joined forces, collaborating art and science to begin The Bearded Lady Project: Challenging the Face of Science.

​The Bearded Lady Project seeks to educate the public, and inspire the same recognition and respect for women in the sciences that their male colleagues typically receive. The mission is twofold: First, to celebrate the inspirational and adventurous women who have chosen to dedicate their lives in search of clues to the history of life on earth; second, to educate the public on the inequities and prejudices that exist in the sciences, with special emphasis on paleontology. The project sets out to engage an interdisciplinary audience through two creative and interactive mediums—filmmaking and photography. 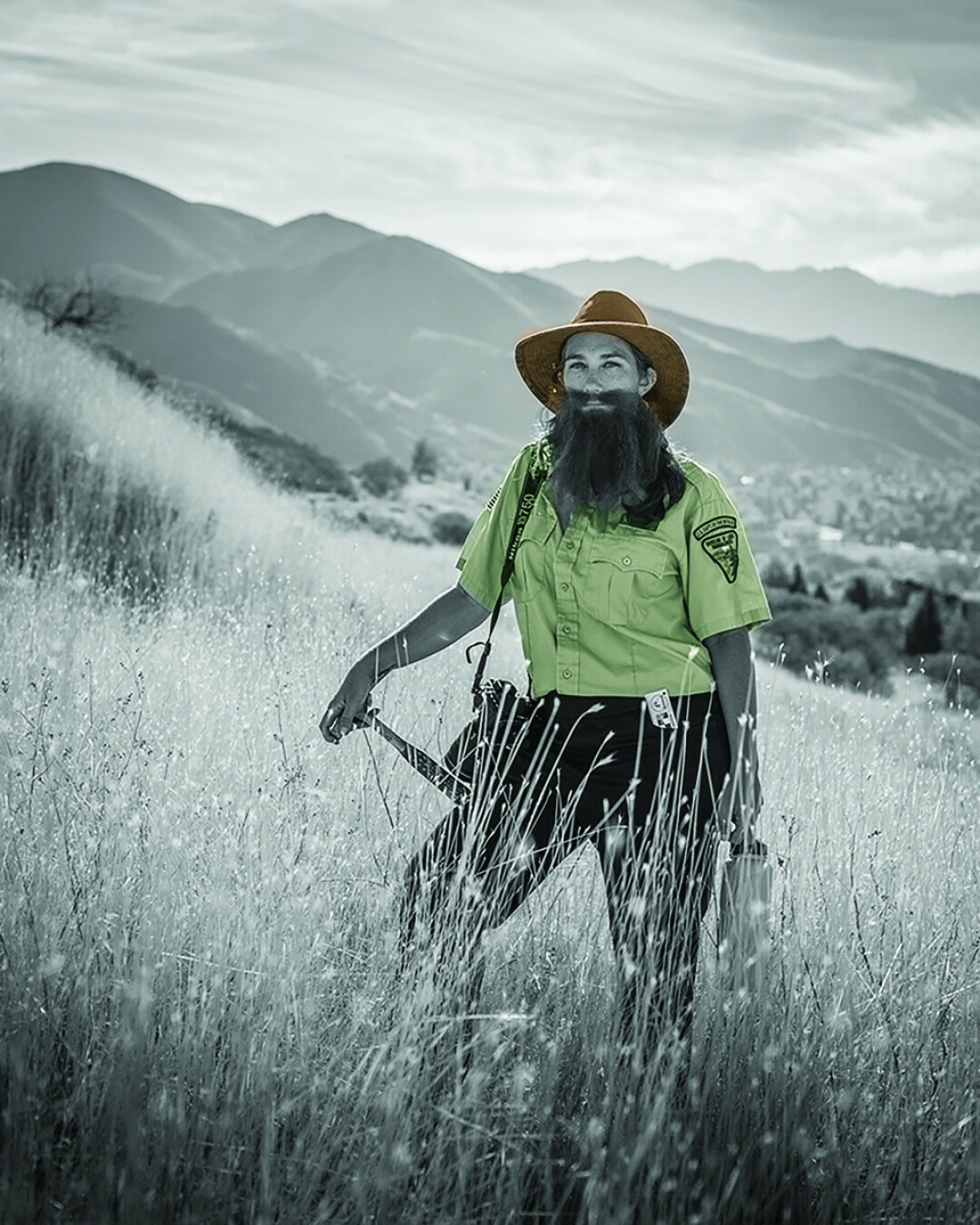 ​The Bearded Lady Project’s touring fine art portrait exhibition will be on display at the Museum of the Rockies from October 22, 2022 – February 12, 2023, in the Siebel Dinosaur Complex. The exhibition features 40 black and white photographs that seek to recreate historical portraits of the female adventurers who are absent from science books and documentaries. Images harken back to the stylized photographs of male paleontologists in historical texts. The beard, a potent symbol of masculinity, is added to the women’s portraits to highlight the inequities and prejudices that persist in the sciences.

​In the early 1800s, when Mary Anning discovered and excavated some of the first fossil marine reptiles from the cliffs of Lyme Regis, she had to turn them over to men for scientific study. Things have changed significantly in the sciences since the 19th Century, but the median salary for a woman with a PhD in geoscience is still $10K less than for a man. By another measure, a woman earns 88% of what her male colleague does.

Today in the sciences, women represent:
• 16% of US geoscience faculty
• 17% of Paleontological Society professional members (i.e., students not included)
• 9.5% of Schuchert award winners (top P.S.
award for a paleontologist under 40) 13% of PS Fellows
• Not a single individual Strimple award winner (P.S. award for amateurs)
• 5% of PS officers in the 100-year history of the society

Why put on a beard to support women? It’s all part of the discussion. Specifically revealing, during a Q&A held at the University of California Berkeley, one early question (asked by a male faculty member) was; “If you want to celebrate women in science and challenge stereotypes, why put beards on them? Why not just photograph them as themselves?” Without missing a beat, Dr. Cindy Looy, a participant of the project, and the reason we were able to come (invited?) to UC Berkeley, stood up and said; “If we were not photographed with beards on, none of you would be here.” She was unflinching in her position, and that is really the hook of the project.

The beards offer a camp style to challenge pervasive stereotypes. Stereotypes are powerful because they are simple. Close your eyes and picture a paleontologist. The majority of individuals will conjure up an image of a man who is white, older, and bearded, and who carries or wears some generalized identifier that connects him to his occupation. Did you picture a pith helmet, or was he dressed all in kaki? The Bearded Lady Project is a collaboration between art and science to take hold of this negative stereotype by altering it in order to present the truth behind the beard. Women are paleontologists too, and it is their complexities as humans that make their scientific work so valuable. The Bearded Lady Project aims to further the mission of the project itself. If women are excluded from the narrative and provided no space, we’ll just need to insert them into the world created by men! Once bearded, maybe there will then be some discussion about what to do about diversifying. Only with a critical mass of diversity can there be any forward progression to improving.

Increasing the participation of women in science is a complex problem that likely stems from many different factors, none of which include lower scientific aptitude in women. Rather, recent research emphasizes the importance of repeated exposure to cultural stereotypes. Here is a quick thought experiment:

Where do we go from here? The truth is that everyone can create positive change. The Bearded Lady Project has written a pledge that many faculty and institutions have implemented.

I pledge...
To work towards an understanding and dismantling of gender bias.
To take an active stance against sexual assault and sexual harassment.
To support and advocate for equality and inclusivity for all, because our identities are intersectional and reflect a complex network of gender, race, sexuality, class, and ability.

To listen and learn from the experiences of others, and foster an environment in which all can learn and thrive... in higher education, my department, my lab, in the classroom, in the field, and beyond.

Lexi Jamieson Marsh is the founder and director of On Your Feet Entertainment and is the director and mastermind behind The Bearded Lady Project.