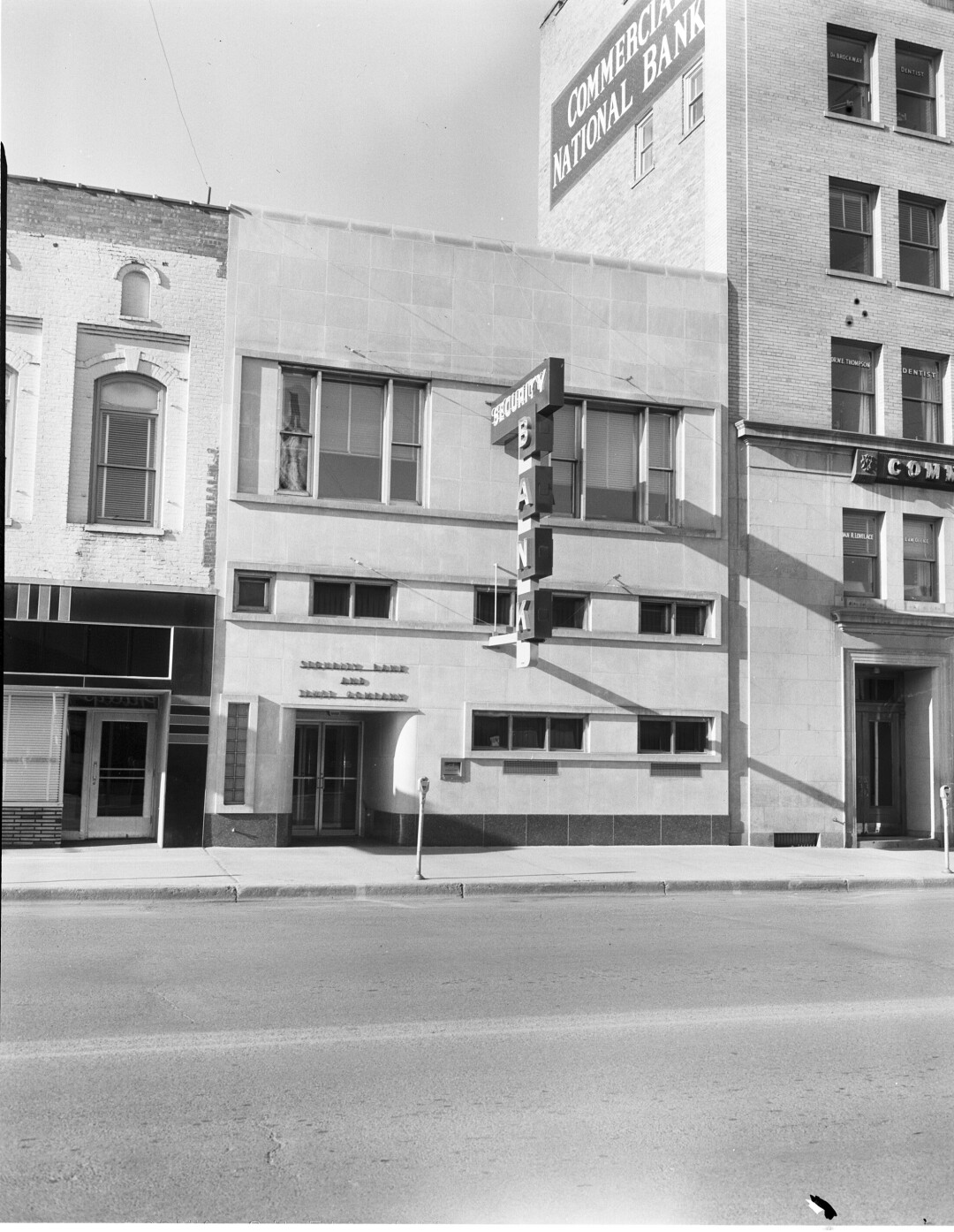 You can find ghosts in some of the nooks and crannies in downtown Bozeman, if you know where to look. Ghost signs, that is. Wikipedia defines a “ghost sign” as “an old hand-painted advertising sign that has been preserved on a building for an extended period of time.” These faded remains of past businesses give a picture of the downtown Bozeman landscape as it appeared a century ago.

Perhaps one of Bozeman’s most recognized ghost signs is the black and white “Montana Motor Supply” that hovers over the entrance to the building at 23 West Babcock, now home of the Architect’s Wife home décor shop. The Montana Motor Supply began as the Lovelace Motor Supply, owned and operated by the Lovelace family. The Lovelace Building at 20 West Main Street (just northeast across the alley from the building at 23 West Babcock) was constructed in 1905, and was originally called The Michigan Building. Local businessman John Alfred Lovelace purchased the Main Street building in 1934, part of which became the new home of the motor supply company. 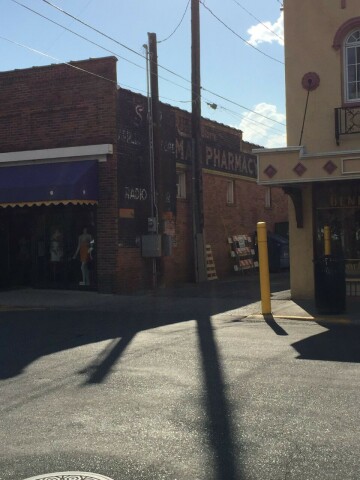 Another interesting ghost sign combination is located just down the alley to the east from Montana Motor Supply. On the south side of the alley at the intersection with Tracy Avenue there are two signs, one on top of another. Both adorn the north side of the storefront now addressed as 23 South Tracy. This particular storefront, now occupied by Suelto Boutique, is part of a larger structure built in several stages in 1926 and 1927. This building was designed to have several storefronts opening onto both South Tracy and West Babcock. The ghost signs on the northeast corner are faded, but you can still make out “SRE Appliance Store” covering an older sign, which reads “Bozeman Pharmacy.”

The 1927 Bozeman Polk City Directory lists the Bozeman Pharmacy at 23 South Tracy Avenue. The Bozeman Pharmacy began as the Rose Drug Company, a pharmacy and drug store located on East Main Street. Rose Drug was operated by Andrew Rose, who sold his company to Fred G. Sivear around 1920. Sivear soon relocated his pharmacy to the brand-new building on South Tracy, and it was likely then that he painted his sign on the alley wall. Sivear sold cameras, photography supplies, and radios, in addition to typical drug store merchandise. The business flourished until the early 1940s, when Fred and his wife Ora moved out of state. 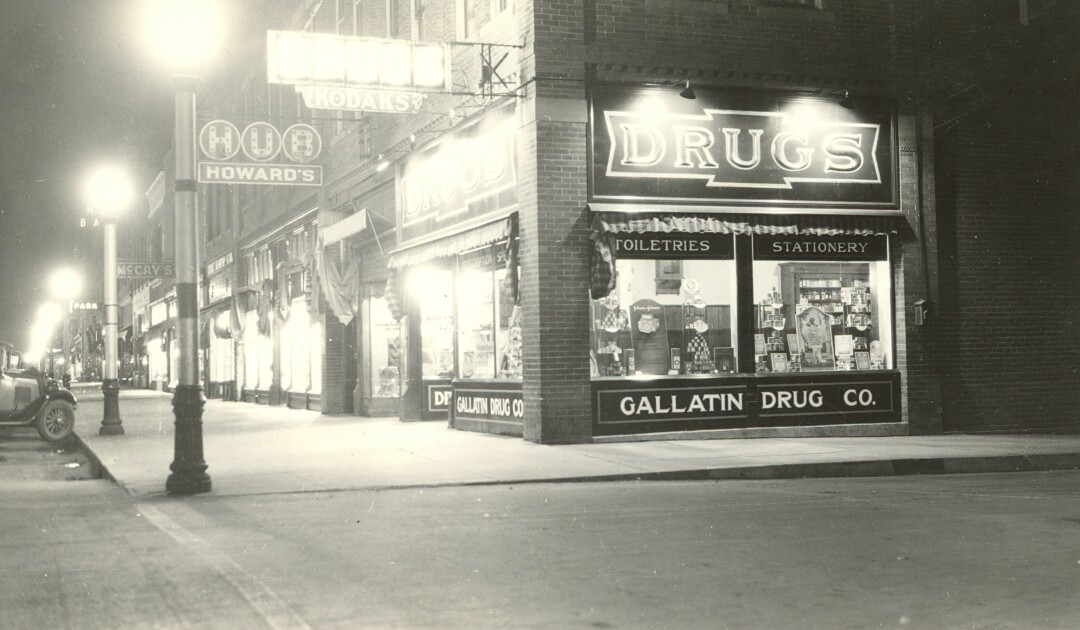 The retail space sat vacant for a couple years, until Sullivan Radio-Electric relocated there in about 1947. Shop owner William J. Sullivan advertised in the 1947 Bozeman City Directory with the motto: “If It Is Radio or Electric We Have It.” William Sullivan, or “Sully,” was a well-known Bozeman business owner. He grew up in Butte, and had a knack for inventing. After high school, Sully built radios in California. During the Great Depression, he returned to Bozeman and worked as an electrical contractor. He started a radio repair business called Sullivan Radio-Electric, hence the “SRE” moniker.

Sully found success with his radio and electric shop for nearly twenty years before he sold the business. Sullivan later opened the AMC Sullivan Photo shop on Main Street—hard to miss with its massive sign on Main Street, and the magnetic Crazy Ducks swimming circles in the store window. These small yellow ducks were another product of Sully’s inventive mind, manufactured in the basement of his Main Street building and sold around the world.

As historic buildings are restored, sometimes forgotten ghost signs are rediscovered. A great example of this is the First National Bank sign on the east side of the US Bank building on the southeast corner of Main Street and Black Avenue. The bank was originally known as the Commercial Exchange Bank, and first opened its doors in 1892. It operated out of a space in another downtown Bozeman building until 1896, when the institution settled permanently in the old Gallatin Valley Bank building on the southeast corner of Main and Black. 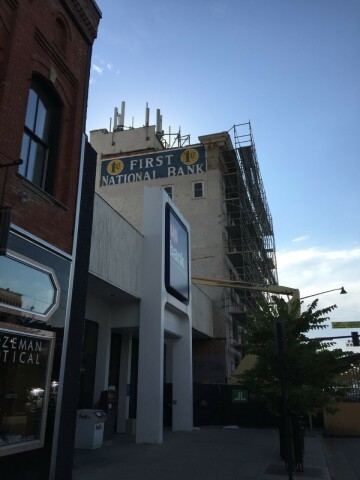 In 1970, massive renovations began on First National Bank. In addition to interior remodeling, a new, modern façade was planned for the exterior. In a 1971 article titled “First National Bank’s New Home Will Add to Community’s Beauty,” the Gallatin County Tribune reported on the modern design. “The present building will be extensively remodeled and the exterior enclosed with a shell featuring aggregate rock and modern windows of dark bronze plexiglass.” For the next fifty years, the First National Bank ghost sign, along with Fred Willson’s Classical Revival style exterior, remained hidden from view. Earlier this year, workers began removing the early 1970s façade, and restoration began on the original 1920 structure. One hundred-year-old architectural design elements emerged, along with the colorful ghost sign on the east side. 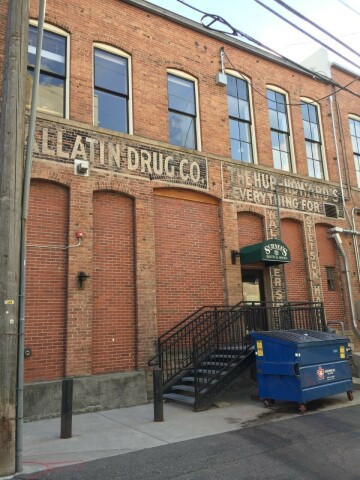 The eastern-most sign in the alleyway simply reads “Gallatin Drug Co.” Gallatin Drug was a long-running establishment in the Story Block. The business first appears in the Bozeman City Directory in 1904, shortly after building construction was completed. The drug store was operated by Illinois-born pharmacist John Kraker, who ran the store for forty years. Upon Kraker’s retirement in 1945, George Christensen ran the business in its corner location until the mid-1950s, when he moved Gallatin Drug Co. to 1011 W. College Street. Gallatin Drug closed in about 1974. The original Gallatin Drug store at Main and Black was later home to the Diana Shop women’s clothing store, Vera’s Fabrics, and Powder Horn Sporting Goods.

“The Hub–Howards” ghost sign is directly next to the Gallatin Drug sign. A vent opening in the brick interrupts the last word of the slogan underneath the business name, which states “Everything for Men.” Howards, or The Hub, was a men’s clothing store operated by Ed Howard. Like Gallatin Drug, this business also appears to be one of the first tenants in the Story Block after it was completed. The Howard family moved to Dillon, Montana from Oregon in 1886, when Ed was only four years old. The family settled in Bozeman in the early 1890s, and Ed and his brothers became prominent local citizens. Lou Howard was an accomplished musician and 43-year director of the Montana State College band. Harry Howard managed the Bozeman Chronicle newspaper, and served as a postmaster and Bozeman city alderman.

The Hub was the focal point of a theft incident in 1940. Thieves from a nation-wide criminal enterprise headquartered in Detroit, Michigan stole men’s suits from Ed Howard’s store. Thanks to Ed’s cooperation with the FBI, four members of the gang were arrested in Montana (learn the full story in a current exhibit at the Gallatin History Museum). In 1944, Junior Cresap McCracken purchased The Hub from Ed Howard, who retired and moved to San Jose, California. McCracken’s family was well-known in the retail business in southwest Montana, and he grew up near Livingston. He married Virginia Story, sister to Winifred Story Lovelace and another granddaughter of pioneer Nelson Story, Sr. The Hub remained in business in the Story Block until the late 1950s.

Moving west down the alley, another pair of ghost signs decorate the end of the Story Block. Though faded and overlapping, a study of past tenants reveals the names. A women’s clothing store called Braten’s initially occupied the west end of the building. Andrew Braten was a Norwegian immigrant who early in his career worked for General Lester Willson at the Willson Company Department Store on Main Street. Braten married Emma Platte in 1897 and opened his own women’s clothing store in Bozeman. Tragedy struck in 1918, when Emma Braten’s body was found in a spring in Bridger Canyon. Emma’s official cause of death was ruled suicide by drowning. Braten’s store moved out of the Story Block in the mid-1920s to another location on Main Street, but Andrew Braten continued to operate it with the help of his daughter Sigrid until he passed away in 1939.

Hollingsworth’s Dry Goods occupied the retail space after Braten’s moved out, and “Hollingsworth’s” is the second ghost sign partially visible, along with “Braten’s” in the alleyway. William Hollingsworth sold hosiery, notions, and other small items. Hollingsworth’s closed in about 1930, but William stayed in Bozeman, where he worked as a salesman and was employed by the Willson Company Department Store. George McCracken operated a department store in this location until the early 1940s.

There are many other ghost signs haunting downtown Bozeman, and each has its own story. Some have disappeared forever and can only be seen in old photographs. Many that remain are faded or partially covered, but they all add to downtown’s nostalgic character.