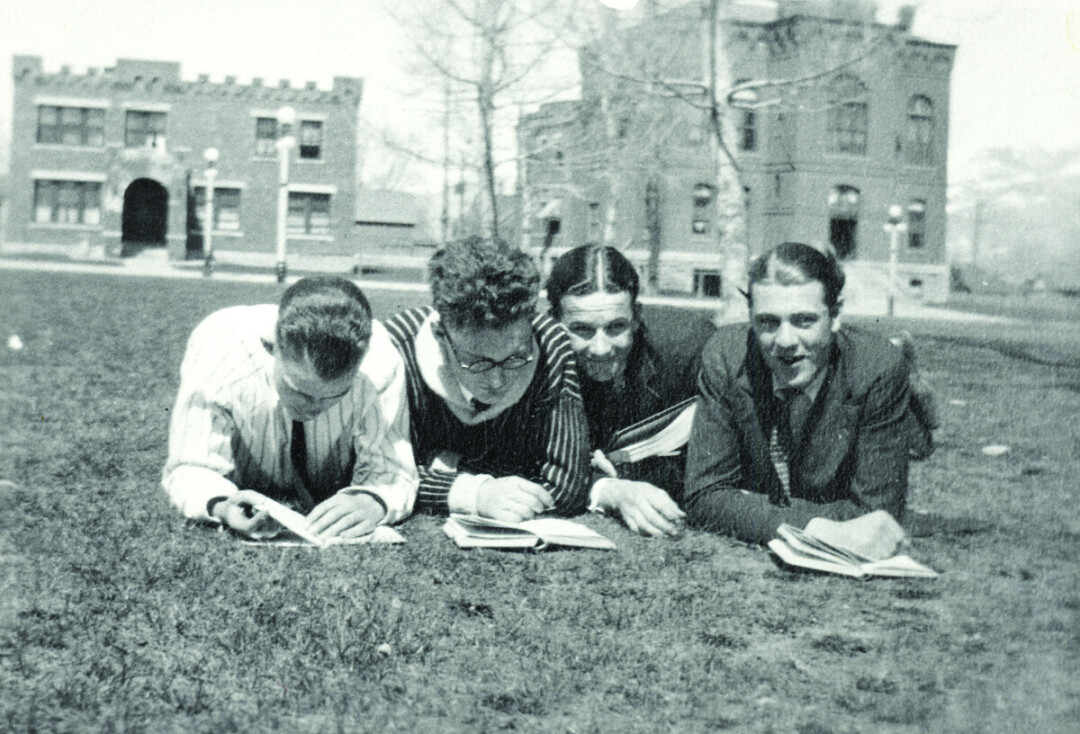 Connoisseurs of classic American film may recognize the young man pictured here on the right with the mischievous look. Though not a true Bozeman native, actor Gary Cooper was a Bozeman resident for two years and graduated from Gallatin County High School. Frank Cooper (the name “Gary” was adopted later on in his film career) grew up in Montana and, though his time in Bozeman was brief, he left an indelible mark.

Frank’s father, Charles Henry Cooper, was born in about 1865 in Bedfordshire, England and emigrated to the United States as a teenager in 1883. He became a naturalized citizen in 1886, studied law, and settled in Helena, Montana. Frank’s mother, Alice Louise Brazier, also from England, emigrated in 1892. Charles and Alice were married March 24, 1894, in Helena. The couple’s first child, Arthur, was born January 15, 1895. When Frank James Cooper was born in 1901, the family lived at 730 11th Ave. in Helena, a home in which they lived until about 1908. The house still stands today.

When Frank was five years old, his father purchased a cattle ranch on the Missouri River fifty miles north of Helena. The future movie star grew up in the country, riding horses and getting into plenty of mischief. Work and school dictated that the Coopers maintain a home in Helena in addition to the ranch on the Missouri River. In the 1910 U.S. Census, Charles, Alice, Arthur and Frank were listed as living at 123 Breckenridge Street in Helena.

From an early age, Frank Cooper was attracted to art. As he related in an article for the Saturday Evening Post published February 18, 1956, “I was nine years old, maybe ten, when I discovered art in all its glory...I had gone down to the Montana State Capitol, where dad was a judge of the Supreme Court. Halfway through the great hall I was stopped, really nailed in my tracks, by the sight of a great mural... I was looking at Charles Russell’s painting of Lewis and Clark at Ross Hole. Years later, I discovered that the mural is one of Russell’s masterpieces, but all I knew then, as a youngster, was that I’d give anything to be able to paint like that.” 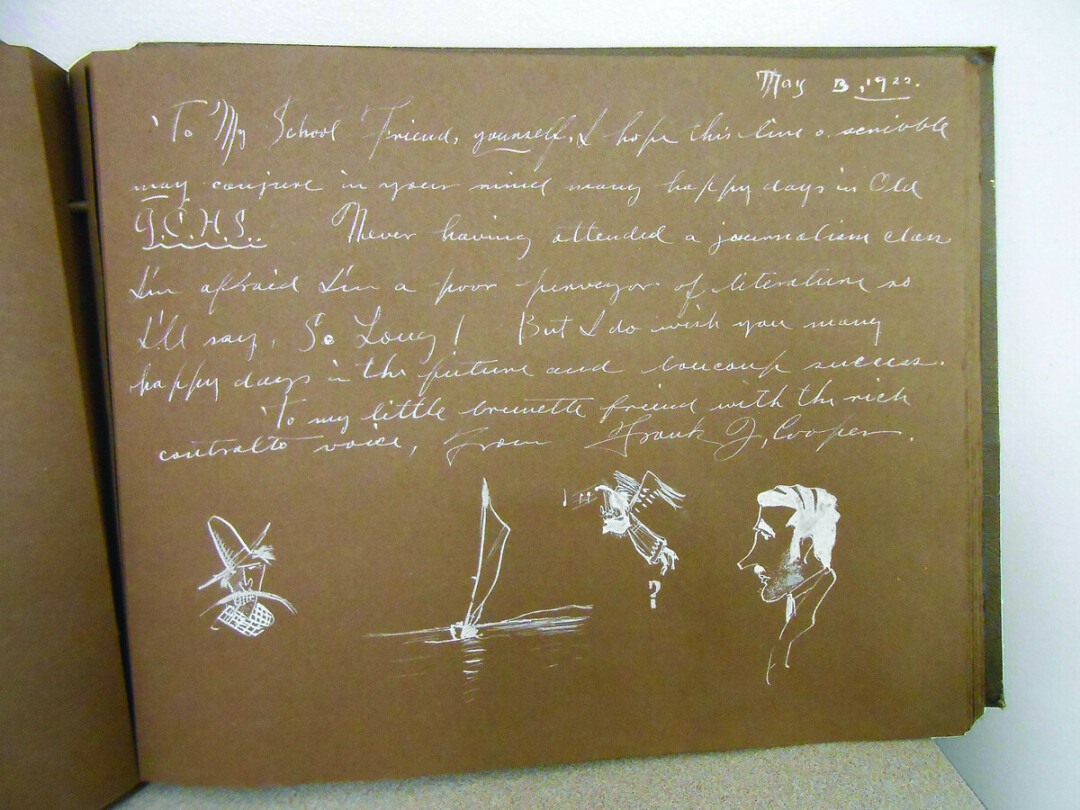 Frank attended Central School in Helena, but Alice Cooper reportedly became concerned about her sons’ Montana education. She decided to take the boys to Britain, and by 1911, Frank, Arthur, and Alice had settled in Dunstable, Bedfordshire, England, just north of London. In his February 1956 Saturday Evening Post article, Cooper shared that he received three years of education in England, which “barely qualified me for picking up where I had left off in the third grade.”

After Alice and her two sons returned to Montana, they split their time between the ranch and a house in Helena. Income from the ranch increased during World War I, when the Cooper family supplied beef for the American Expeditionary Forces (A.E.F.). Charles Cooper continued to pursue his legal career, and in 1919 began a term as an Associate Justice on the Montana State Supreme Court. Frank’s brother Arthur enlisted in the U.S. Army in June 1917, so it was up to Alice, Frank, and a few hired hands to keep the ranch operating. Again, Frank fell behind in school.

While a teenager, Frank and his friend were cruising the hilly streets of Helena in a Model T Ford when the brakes failed, the speeding vehicle overturned, and the pair were thrown from the car. At the time, the doctor told Frank he had no broken bones, just torn ligaments in his hip. Frank returned to the family ranch to recover, and found it was easier to get around by riding a horse rather than using crutches. He later credited this car accident with teaching him how to become an expert rider. In the Saturday Evening Post article, he remembered, “Up to then I had been a slam-bang, rodeo-type rider who could stick on anything that bucked, and I could punish the saddle for hours at a time. Now, with my hip hurting me, I learned to anticipate the horse’s next move, and then his next, until I got to the point where I could ride at a full gallop and instinctively know just about every step and twist that horse was going to make in the next hundred yards.”

A bit of a prankster in his youth, Frank was eventually expelled from Helena High School in 1920. Judge Charles Cooper promptly transferred his unruly son to Bozeman to finish high school in a new venue. Frank was older and taller than most of his fellow classmates, and brought some of his mischief with him to Bozeman. His most well-known prank centered around an incident involving Limburger cheese. It is unclear whether this occurred in Helena or Bozeman, but it has become legendary. According to the story, Frank and a buddy spread Limburger cheese all over the school radiators. An unpleasant aroma wafted from the heaters when they were turned on, causing a school-wide evacuation.

While in Bozeman, Frank Cooper attended the original Gallatin County High School, located on the southwest corner of West Main St. and South 3rd Ave. (the current 300 W. Main building). He was also able to take some art classes at Montana State College. High school teacher Ida Davis left a lasting impression on Frank. She persuaded her reluctant student to participate in the senior class play. On May 18, 1922, Gallatin County High School seniors put on a production of The Gibson Upright by Booth Tarkington and Harry Leon Wilson. Cooper’s role required him to propose to the leading lady, which he was rather reluctant to do. With Miss Davis’ encouragement, the play was a success and Cooper experienced his first taste of acting. Years later, the famous film actor often stopped in Bozeman on trips back to Montana so he could visit his former teacher. In 1961, Look magazine documented one of Cooper’s trips home and published a touching photograph of Gary Cooper taking Ida Davis out to lunch. 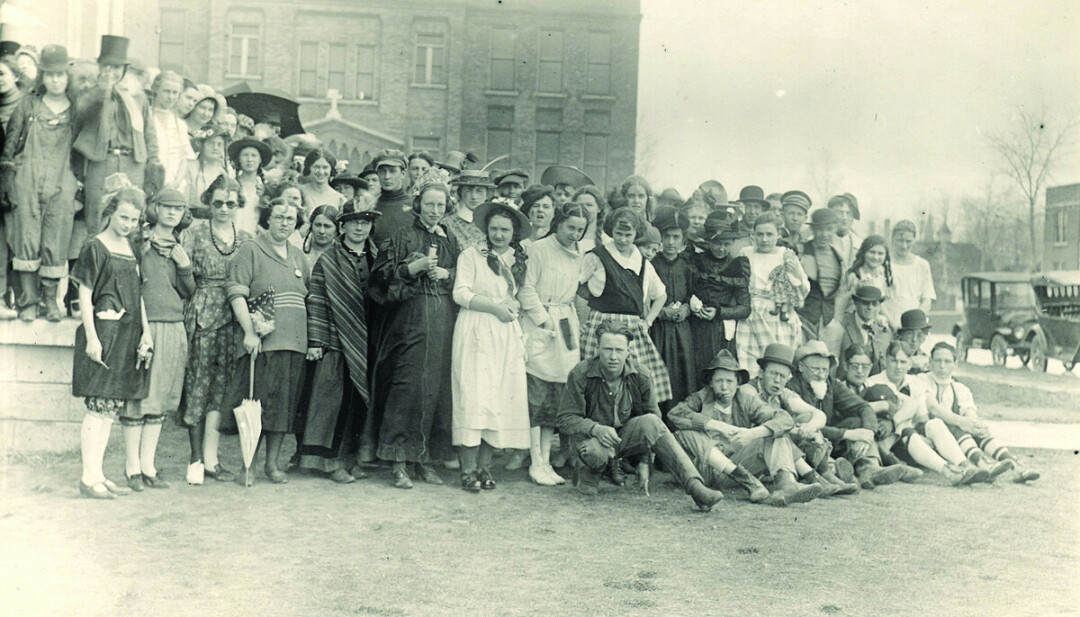 After two years living in Bozeman, Cooper graduated with the Gallatin County High School class of 1922. In the Gallatin High yearbook, each student listed their academic focus, activities, and motto. Frank’s area of focus was English History, and he listed Declamation, Debate, and Extemporaneous Speaking for his activities. His motto, “Smoking never stunted my growth,” fit him perfectly. Frankie Hier, a high school classmate, reminisced about their graduation day in a 1998 Billings Gazette article: “He [Frank Cooper] started this snake dance out of the school all the way downtown and through every store—and I mean every store.” Cooper also decorated a page of fellow classmate Mae Walton’s scrapbook. Along with the ever-present cartoons, he wrote a farewell message: “Hope this line of scribble may conjure in your mind many happy days in Old G.C.H.S.”

In the early 1920s, Cooper spent three summers driving tour buses in Yellowstone National Park, earning $90.00 a month. He also continued to pursue art, and was able to get a few editorial cartoons published in the Helena Independent newspaper in 1924. Frank lived briefly in Iowa, where he attended Grinnell College. Still hoping to find success in the art world, Frank traveled to California to visit his parents, who had recently sold the Montana ranch and moved to the Los Angeles area. It was here that Frank began work as a Hollywood film extra. He excelled at stunt riding and portraying cowboys, putting to good use the horsemanship he had acquired as a teenager on his father’s Montana ranch. His old hip injury came back to haunt him after a movie set riding spill. This time, the doctor ordered x-rays and noticed telltale signs of an old fracture, probably made worse by horseback riding. In hindsight, all that riding as a teenager had certainly paid off. After a 1926 screen test, Frank’s acting career began to accelerate.

Because there were other actors in Hollywood named Frank Cooper, his agent encouraged him to change his name to Gary, after Gary, Indiana. Fame quickly followed; Gary Cooper went on to appear in almost ninety movies throughout his career, including favorites like Mr. Deeds Goes to Town (1936), Sergeant York (1941), and High Noon (1952). Over the course of his decades-long acting career, Gary Cooper received two best actor Oscars. He received an honorary award from the Motion Picture Academy a month before he died of cancer on May 13, 1961.

In 2010, before the old Gallatin County High School in downtown Bozeman was renovated and transformed into condos, this author and a fellow museum colleague were lucky enough to receive a tour of the old 2nd floor high school theater and stage. The hallways of the old school were vacant and the building was quiet as we climbed the large, creaking staircase, still graced with beautiful woodwork. At the time, the stage and small auditorium were used for storage, but you could still imagine the performances held there.

Backstage, scrawls and signatures from generations of high school students covered the walls. Most inscriptions dated from the 1930s through the 1950s, but we held on to the slim chance that a remnant of Frank Cooper existed among the handful of 1920s-era signatures. Our exploration uncovered several well-known Gallatin County names, but nothing from Frank Cooper. Perhaps the nervous future star never graffitied his name backstage, or perhaps water damage, paint, or plaster long ago covered over any trace of its existence. However, you can still spot Gary Cooper’s name in Bozeman. He is featured in our very own local “Walk of Fame,” and his name appears on a small star in front of the Ellen Theater, just blocks from where he made his acting debut.