Bozeman is an outdoor lover’s paradise that attracts people from around the globe. Not only are we mere hours away from two national parks that are world renowned for their natural wonders, we are also surrounded by tall mountain peaks and a vast wilderness. This is a place that offers endless recreational activities for you and your four-legged friends. The whole state practically screams adventure. There are countless lakes, hiking trails, and parks, many of which are dog-friendly, which makes seeing dogs happily enjoying the outdoors with their people a common sight around here. But what about your other pets? Could you imagine hitting your favorite hiking trail with your cat by your side? 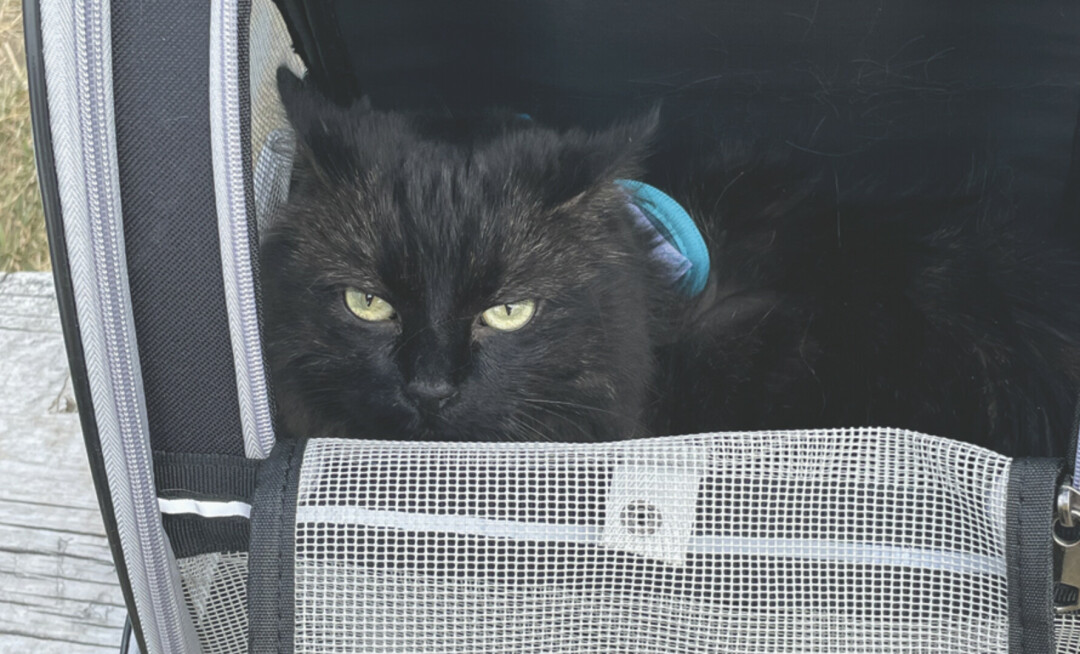 I met Tribble, my cat, roughly four years ago at the wonderful Stafford Animal Shelter. She had been found as a stray on the streets of Livingston. I had been considering getting a new cat for several months, but I hadn’t actually planned on taking one home that day. Mostly, I just wanted an excuse to get out of the house and say hi to the animals. But then I saw that little angry ball of black fur hiding in the back of her kennel. The feral little shadow whose fierce yellow eyes were locked on me hissed violently—and melted my heart; I knew there was no way I was leaving without her.

That was four years ago; we’ve been through a lot since then. While she is definitely not as homicidal as she once was, Tribble had never grown out of that wild streak of hers. If she isn’t trying to steal my food or bully her siblings, she is practicing her annoying, effective escape artist routine. Every time someone opened the front door she was there, waiting, looking for a way to sneak her way past your defense and out of the house. Typically, she’d end up rushing forward at the last second before the door closes, tripping me in the process. Then the chase begins. Ever try to find a black cat with a martyr complex at 2 am? It’s definitely not my favorite pastime. She’ll be hiding in bushes or darting under cars while I run around in the dark, whispering curse words under my breath and praying she doesn’t run into the street. I honestly would love to let her be an outside cat; maybe she’d be able to burn off some of that energy. Unfortunately, not only do I live between two very busy roads, but I’ve heard way too many horror stories from my friends about how their own pets have been stolen or found dead on the side of the road. Like any pet parent, I would hate for that to happen with my own animals. Regardless, I found myself sympathetic to her plight. Tribble’s near-daily escape attempts, along with her staring out the window for hours, had begun to make me feel like a heartless prison warden.

Hoping to find a safe way to introduce her to the outside world, I took to the internet for ideas. I knew that some people had been able to leash-train cats before but, as it turns out, many people take their beloved felines on adventures. I found multiple blogs, vlogs, and TikToks about people taking their cats with them on their outdoor recreation excursions. There are hiking cats and bike riding cats. There are truck driver cats that travel across the country, and beach cats that swim in the ocean. Cats that climb mountains and cats that surf. As it turns out, training a cat isn’t as uncommon as you might think. While most resources recommended starting leash training when your pet is a kitten, I purchased a kitty harness and pet carrier backpack anyway. Considering Tribble’s age and stubbornness, I wasn’t sure if it would be successful or not, but I was hoping to be able to take her on some small adventures. Maybe this would help us form a compromise and stop the escape attempts, as well as create enrichment in her life. 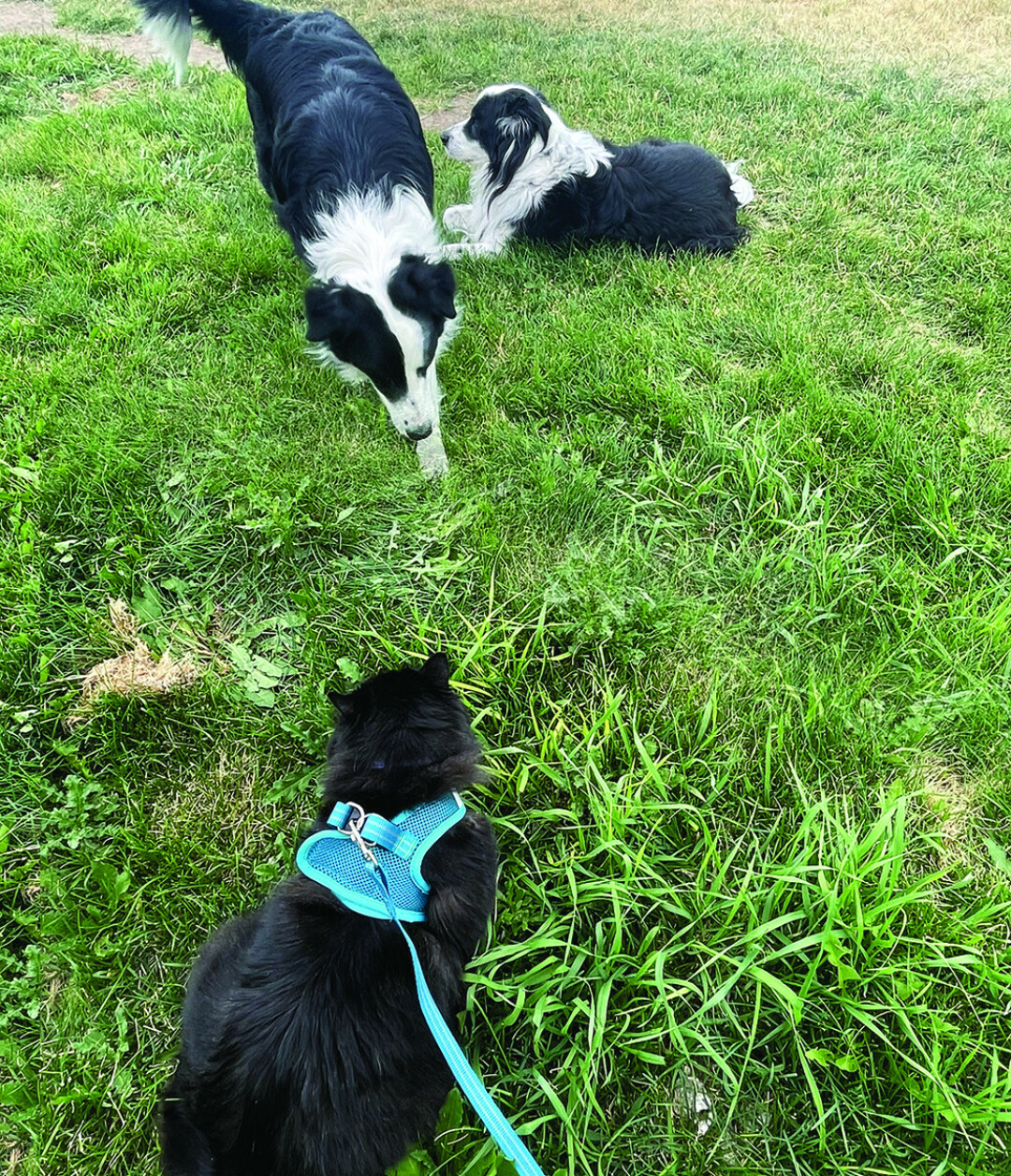 Once I received the harness and backpack from Amazon, I wasted no time in getting Tribble acquainted with them. While she was eating, I slipped the harness on her. The food created a distraction and she accepted the harness without a fight. Once she could be bothered, Tribble protested by dramatically flinging herself to the ground, only moving to attack the dog when he came too close. I let her adjust to having the harness on by having her wear it around the house for a few hours a day before trying to take her outside.

Our first day outside was eventful. Tribble was hesitant about the leash at first, but quickly got used to it. Together, we went for a short walk about the apartment building. Unfortunately, when I tried to bring her back inside, Tribble started to struggle, and got out of her harness. As it turns out, the claim that the harness was “escape-proof” was an optimistic description. Either that, or my cat is the next Houdini. I got her inside and, after some minor adjustments, I was able to make the harness a little more difficult to slip out of.

Getting Tribble used to the backpack was a little difficult. I first started by putting it in places that she spent time in, like next to a cat tree or next to her food dish, hoping that she would associate it with places of comfort. However, she seemed uninterested in it at all, until I sprinkled catnip inside. That piqued her interest enough to notice its existence. She stuck her head in the backpack and ate all the catnip, still refusing to go inside. Finally, after some coaxing, I was able to get her in the backpack. Normally, putting her in a carrier is a battle that leaves me covered with scratches, but she accepted the backpack without much fuss. She didn’t even meow when I zipped the door up.

I started taking her on walks around our neighborhood in the backpack when I would take my two dogs out. I expected there to be a struggle at first but, once she realized the backpack was a way for her to get outside, she seemed to enjoy it. We’d go to the empty field near my apartment. While the dogs ran around sniffing things and going about their doggie business, Tribble and I would be exploring the deep grass, stalking strange bugs. After she got bored of that, Tribble would find a nice sunny spot and chew on the grass while watching the dogs chase a ball. The dogs, as it turns out, are very protective of their feline sister. They never stray far from her side, and they’re quick to guard her against other neighborhood dogs. Tribble, who normally merely tolerates their presences, has seemed to develop a new appreciation for the dogs. I even caught her playing with them nicely once or twice without claws. While I didn’t expect this newfound friendship between them, I must say that the household has been much more peaceful lately. 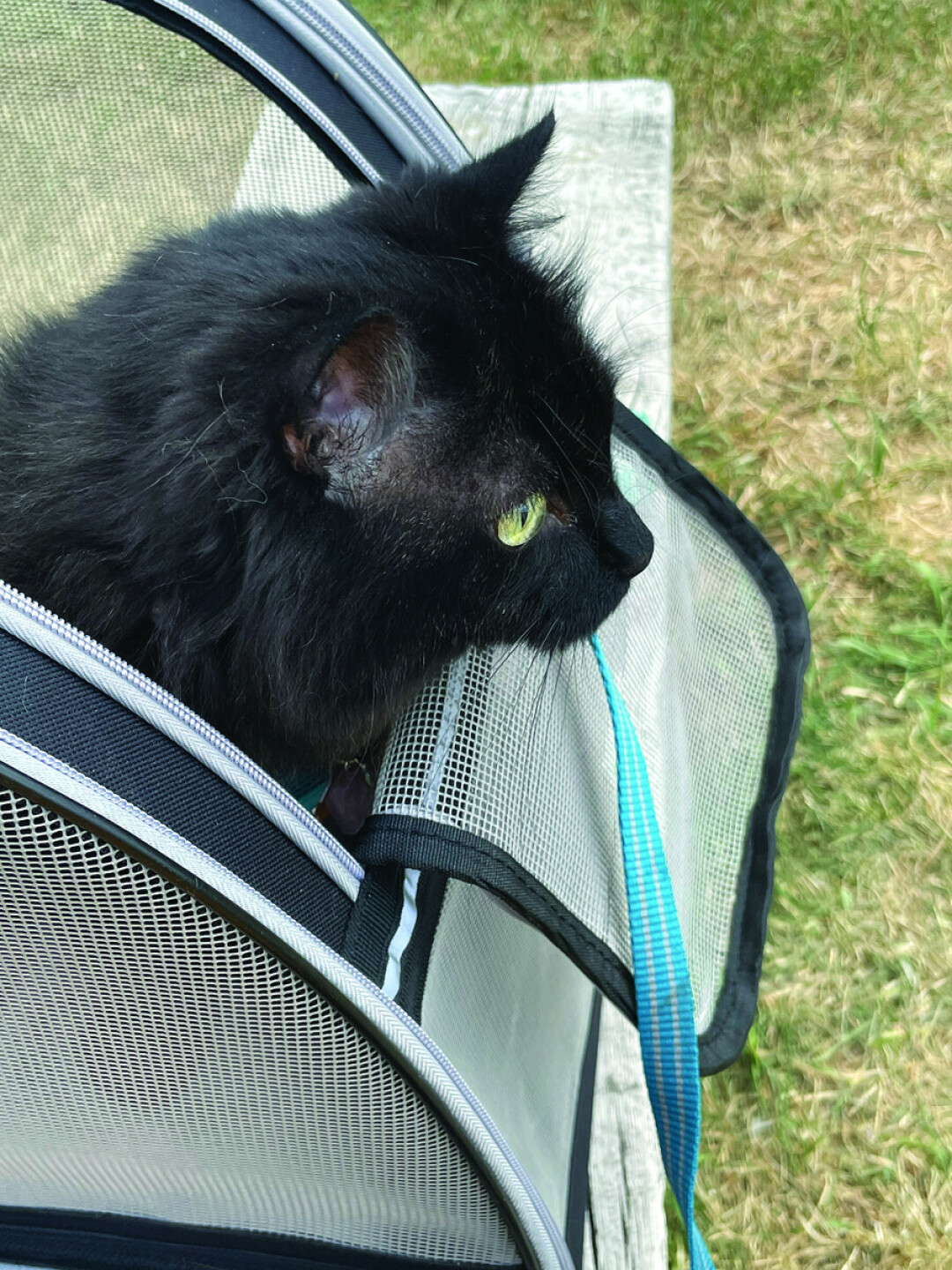 I was pretty nervous when my roommate and I decided to take Tribble and the dogs out to Bogert Park for an afternoon excursion. Luckily, it was a very quiet, tranquil day. The rain had finally stopped just long enough for the sun to come out; we couldn’t have asked for a better day. While walking the dogs, we kept Tribble in the backpack. She hasn’t quite gotten the hang of walking with the group and prefers to explore in solitude. After a while, when the dogs were tired of chasing the ball, we all sat down in a sunny spot and I let Tribble out to enjoy the grass and fresh air. She didn’t seem to be very interested in anything other than lying in the sunshine next to her canine security team, but that was perfectly fine with everyone.

Tribble still has a way to go before I’m confident enough to take her on a hiking trail, but she’s making progress and is, surprisingly, behaving herself. While I’m not sure if she will ever be like those bold and daring felines that are taking the internet by storm, I feel that taking her outside has greatly increased her quality of life. She isn’t as restless as she was before; her number of escape attempts has plummeted; she doesn’t bully her siblings as often and, overall, she just seems happier. With more training, I’m sure it’s only a matter of time before she joins me and the dogs on the trails or for camping trips. In the meantime, the dogs, cat, and I will continue to enjoy spontaneous trips to the wonderful parks the Bozeman area has to offer.

If you have a hiking cat please visit our social media pages to share your story and images.

Marion Jackman is a Senior at MSU, majoring in English Writing, and an intern at Bozeman Magazine. When not writing, she enjoys going on adventures with her dog, Jay.