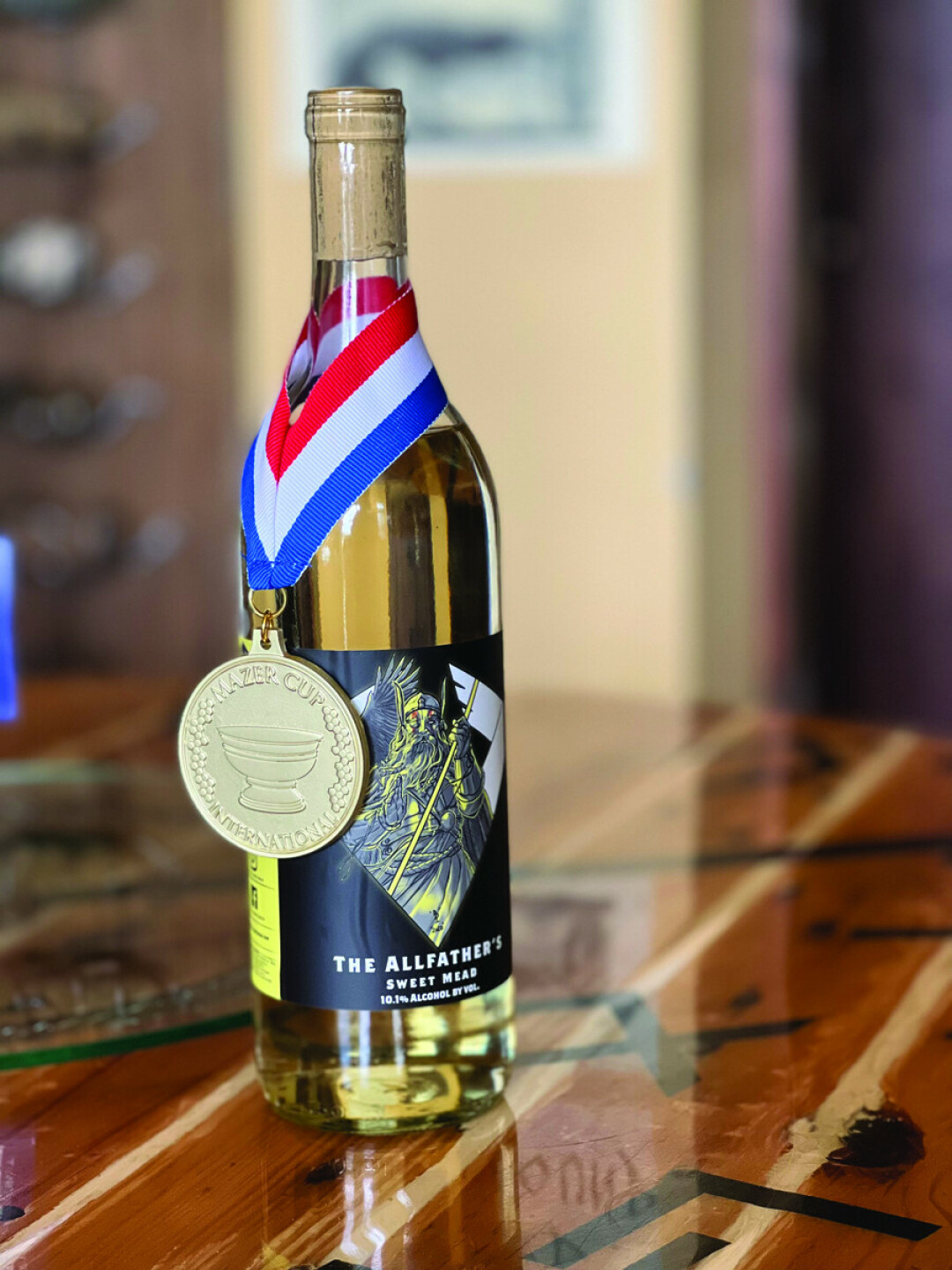 Mead is not only the drink of sea-faring Vikings and long-dead royalty, it is also a popular choice today in Bozeman. One of only two meaderies in the state, Valhalla Meadery [875 Bridger Drive] has been keeping this “nectar of the gods” flowing since the fall of 2018. Paired with their affordable Scandinavian fare, it is a not-to-miss stop on the Bozeman Food (and Drink) Scene. Founder and bartender Dylan Watson gives us a look at all-things Valhalla.

Dylan Watson: It all started with an interest in producing craft alcohol; then, that specifically was distilled into Mead. The fact that there aren’t any other Meaderies in Bozeman… there’s only one other Meadery in the state within a 300-mile radius. Also, growing up in Bozeman I realized the demand for craft alcohol is very high, and people are very willing to branch out and try new things, get out of their comfort zone. Everybody’s sort of looking for something new and delicious. Another large factor in how we came up with the idea was [the fact that] Montana is one of the leading producers of honey. Mead has only two inputs: honey and water, and whatever yeast strain you’d like to add in there. We’ve got some of the best honey and water you can find anywhere, so it just makes sense that we would use those local inputs to produce a value-added product that would presumably be consumed by people in town, in the state, and in the immediate environment. Hopefully, one day we can expand to more of a national brand.

The name Valhalla was actually the idea of one of my business partners who wanted to start a restaurant called Valhalla. He has a catering company, the Viking Chef. His name is Halden Peterson; he’s from Livingston and has been working in Bozeman for a number of years. I was working alongside Hal at his restaurant, Taco Montes, and we’d been sort of spitballing ideas around. When I brought him some mead for his birthday one year, he really liked it, so we just took it from there—what would it take to start a Meadery? We then came up with a business plan. After that, I was just trying to find some money and, funnily enough, later that week I was on the ski lift up at Bridger with one of my good friends, Dylan McKenna, from growing up… I was telling him about the idea, and he thought it was a really great idea. The conversation went something along the lines of, “Yeah, and now I just need to find some money.” And he was like, “Well, I got some money.” That came as a total surprise, because we’ve grown up together, and it was very unexpected. So, we basically went headfirst and started making it happen; less than a year later, on October 31st 2018, we were opening our doors to Valhalla Meadery with Dylan as the mead maker. 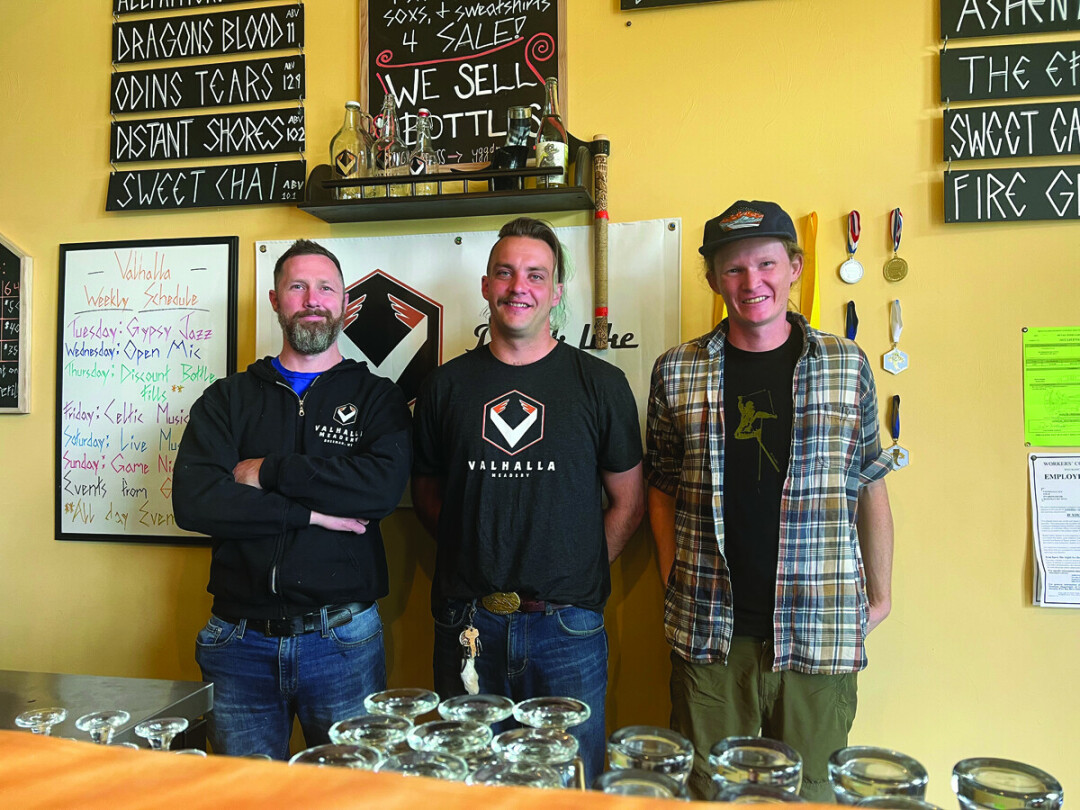 Hal Peterson, Dylan Watson, Dylan McKenna
AR: Who do you go to for local honey?

DW: We have sourced honey from a few locations in Montana. The majority of our honey comes from Power, Montana; it’s Smoot family honey. We also have sourced from a few local producers in the Gallatin Valley—one that comes to mind is a company called A’s Bees.

DW: I would say to have a novel experience, to have a unique and culturally significant place to eat and drink. A lot of what I like to focus on is providing excellent products, whether that be the mead or our Scandinavian-inspired cuisine, as well as excellent service, making people feel like we want them to be there. Aside from excellent drinks and service, one of my goals as a local business owner, particularly as a bar that serves food, is to provide more of a cultural venue, or cultural hub. Historically, mead has been called the drink of poetry. It definitely has a history of accentuating culture in that respect. So, providing a venue for local artists, musicians, poets, and producers of culture in our community to convey their message is pretty important. We feature numerous local artists and ceramicists, we do Open Mic once a week, we host a Jazz night, and have Celtic music every Friday. In a nutshell, we are providing quality food and drink in a culturally significant environment. We try to provide a service to our customers, but also provide a venue for local art and culture. That is definitely my personal mission; I just want to make sure that people in my community feel like they have some sort of support that’s not just focused on what’s going to make money; it’s focused on what brings people together and brings significance into people’s lives. 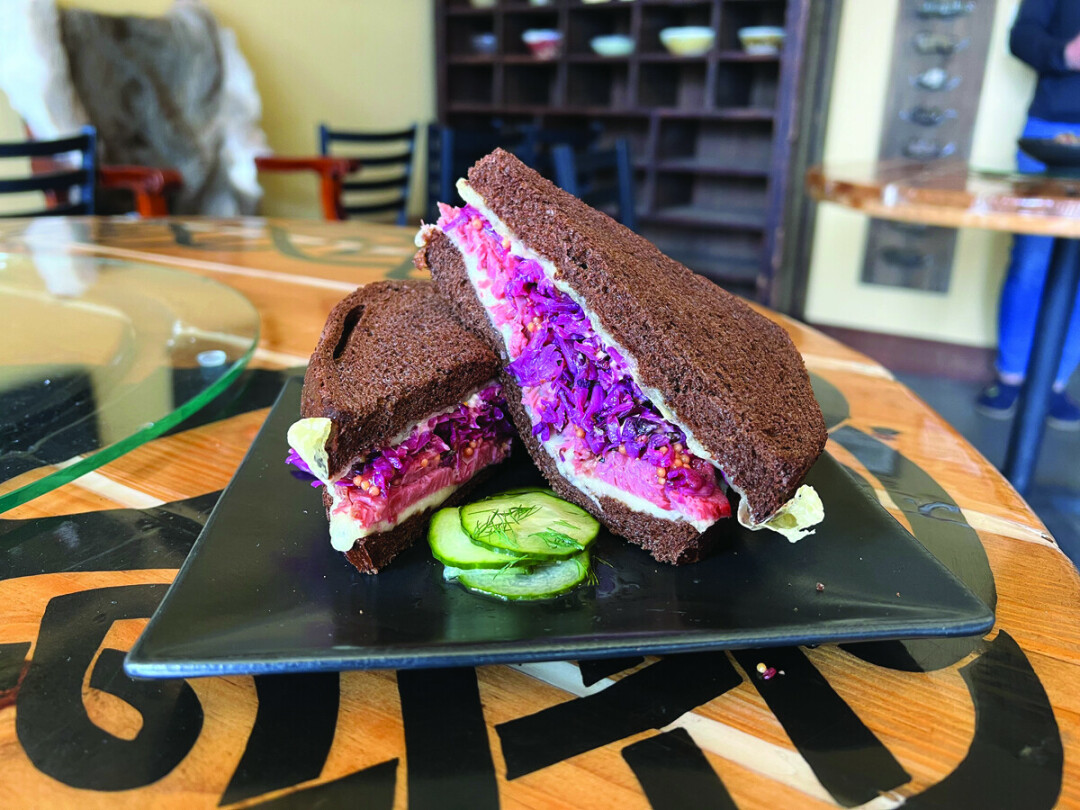 AR: What makes Valhalla unique in the Bozeman Food Scene?

DW: I would say the theme. Our cuisine is Scandinavian-inspired; it’s contemporary Scandinavian food with a focus on being from-scratch, delicious, affordable cooking. We do happy hour from 4 - 6 pm Tuesday through Sunday, and offer food specials every day, which is really great—to make it so that everybody feels welcome in the establishment. Just with how pricing is going with food in Bozeman in general, it’s nice to have that option for our regulars, so that I can still see everybody coming in. Everybody can afford to come see us, which is nice.. I wouldn’t classify us as a full-scale restaurant—we’re a Meadery that serves food. But every day I have people tell us; “You know, this is the best salmon chowder I’ve ever had… these are the best meatballs… I don’t even like salmon and this is awesome.” We’ve gotten a lot of really good feedback and Halden Peterson, the Viking Chef, has come up with some really innovative ideas. Our charcuterie is exceptional and super unique. I had somebody in the other day who was a chef in New York and they said that this is the best charcuterie board they’ve ever had! I was kind of surprised. It’s flattering, and providing non-pretentious, quality food is important to us. 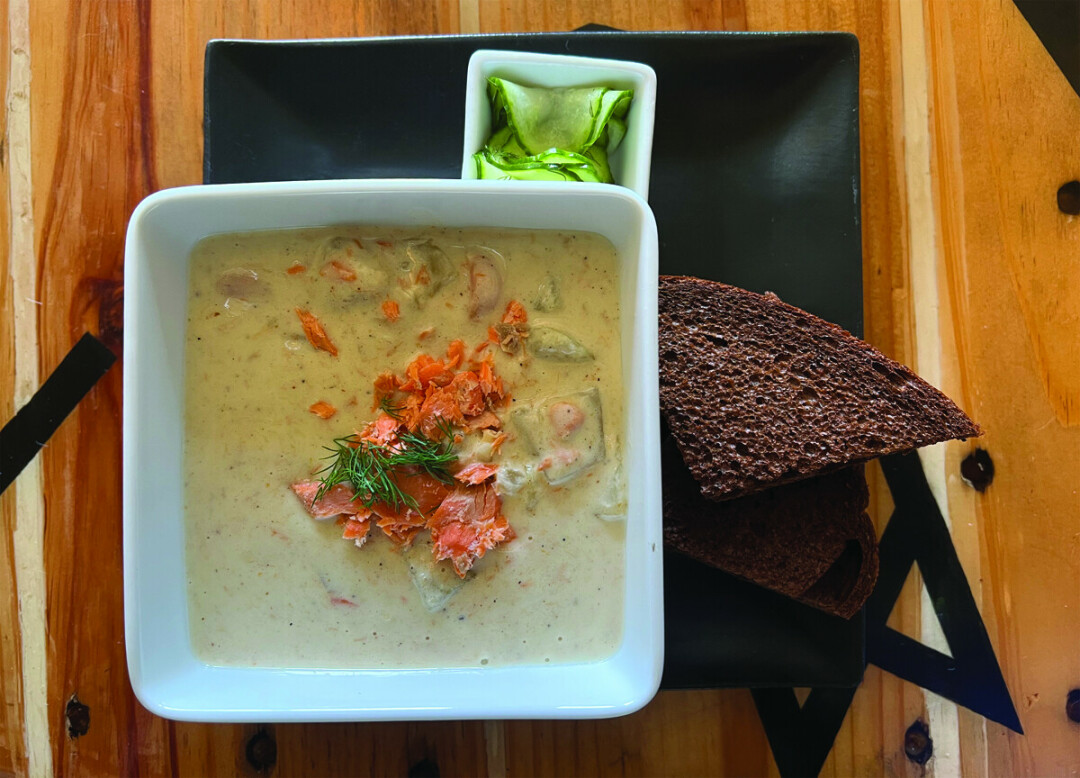 On the mead side of things, this past year we won a gold medal at the World Cup for our traditional sweet mead, so that’s pretty neat. Technically, this vintage is the best traditional sweet mead in the world for 2021. One of our most unique flavors is one that we’ve always had on the menu, the Dragon’s Blood. We make it with beets and ginger, so that’s super unique. It’s very earthy, kind of spicy, slightly sweet, but more of a dry beverage. One of my favorites right now is called the Distant Shores; we made that with honey as well as maple syrup, so it has a really nice, subtle maple nose to it, with hints of dried fruit, like fig. There’s a little bit of an acidity or tartness, almost an apple flavor on the tongue, and it’s quite nice. It’s also like a semi-sweet, more off-dry beverage, so very drinkable, and quite tasty. Normally, we have 13 flavors available in-house at any given time, and we try and come out with a new variety of mead once a month.

AR: What would you say your regulars keep coming back for?

DW: The salmon macaroni and cheese is pretty fantastic. That’s probably hands-down our most iconic dish. Swedish meatballs are often the first thing to come to mind when people think of Scandinavian food. We have just the best meatballs. People love them. 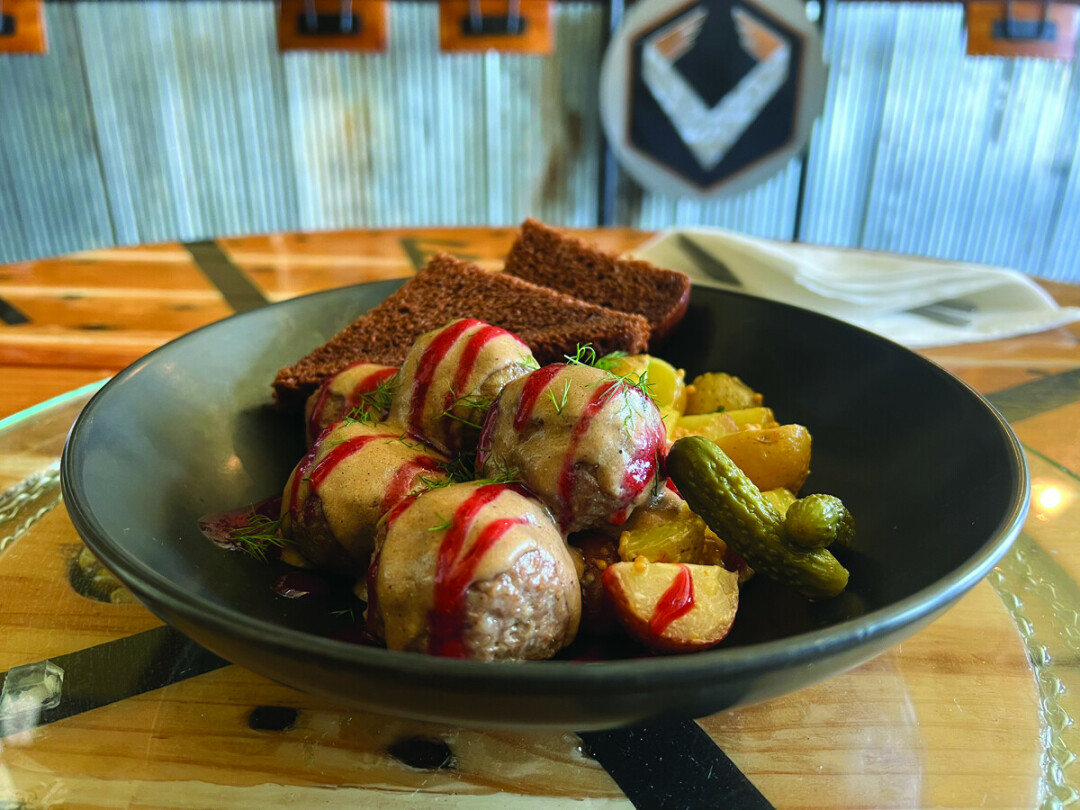 AR: How about mead flavors? Is there a favorite that regulars order constantly?

DW: I guess people know what’s good—the mead that just won the gold medal has been our most popular mead. We’ve had it on the menu the whole time, and it’s always the one we’re running out of first. People just love it.

AR: What is your personal favorite menu item?

DW: That’s a tough question. If I were to sit down at the bar and order food and a drink, I would get an order of Swedish meatballs and a glass of The Shield Maiden, which is a dry, sparkling, traditional mead. It’s just honey and water, but instead of being on the sweeter side it’s going to be totally dry, almost like a honey champagne. It’s crisp and sparkling, roughly eight percent alcohol, and quite refreshing. Normally I’m going to have more than one of those, so I like to stick to the lower alcohol.

AR: How many meatballs come in a serving?

DW: So the full plate is going to be five meatballs, a side of the Nordic potato salad, rye toast and house-made pickles. For the happy hour deal we do an ala cart meatballs, which is just three meatballs, beef gravy, lingonberry jam, and a side of rye bread for six bucks.

AR: Do you have anything coming up that you’d like our readers to know about?

DW: Yes. We do Jazz on Tuesdays; open mic on Wednesdays with the Poetry Collective; Thursday is our bottle sale day; Fridays are Celtic music; Saturdays we have rotating live performances by local bands, and Sunday is our game day. You bring in a game and every player gets a free drink.

We also have a new food truck partnership; Halden Peterson, our chef and business partner for Valhalla, owns Taco Montes, and we’ve developed a new project together [called] Taco Montes Northside, where the old Rendezvous food truck was (611 N Wallace Ave). We should have that open by June 1st and, hopefully through November, as long as the weather permits.

AR: What do you personally enjoy most about being part of the Bozeman community?

DW: I would say I enjoy the fact that I have found a job where I can be having a bad day and then go to work and come home and feel like my day got better. I feel like going to work actually makes me happy, and that’s probably because on any given night I probably know the names of over half the people that come into my business; I personally make an effort to get familiar with my regulars. It’s very rare that I go into a restaurant and people know me by name, and I think that people really appreciate that. So yeah, I’d say just the familiarity with the community is what I enjoy most about being a part of it.

Obviously, you don’t have to die in Viking combat to travel to Valhalla Meadery in Bozeman—you just need a sense of adventure and an open mind and palette. Cheers!