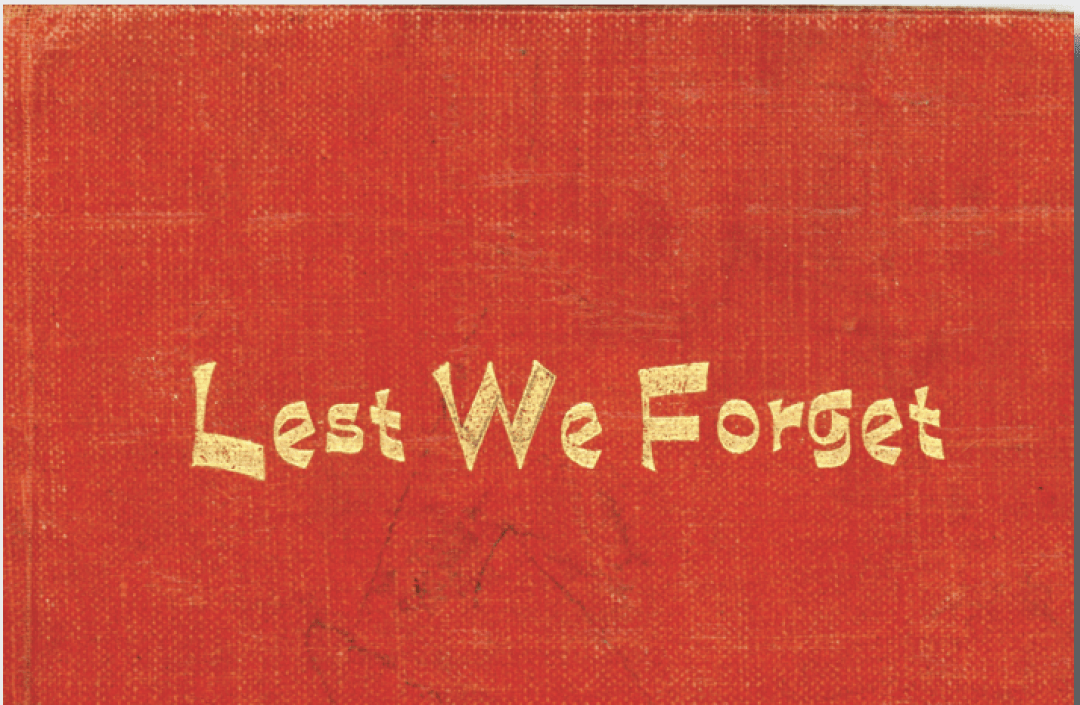 The art of writing poetry has a long history in Bozeman. Early local amateur poets created work inspired by people, events, and places in Gallatin County, or to amuse their friends and neighbors. The Gallatin History Museum archives contain several poetry books by local authors. Many poems reveal Bozeman’s past, and reflect the personalities of the authors themselves.

Josephine Eckles Geyer was born in Lawrence County, Pennsylvania in about 1853. She married Henry Geyer and the couple had two daughters — Vesta and Vera. Census documentation places the Geyer family in Kansas in the 1880s, but it is unclear where else the family lived in the late nineteenth century until they reached Bozeman. Much of Josephine Geyer’s personal life remains a mystery, but during her residence in Bozeman she appears to have been separated from her husband. Perhaps this difficult time was the inspiration for her poem, “Echo.”

O for a written word like cooing dove
To cherish from the one I loved.
I loved.

Would prove his love as pure and free
As the love that he has won from me,
From me.

What comfort in hours that lonely seem,
As in the long past years I dream,
I dream.

Of one who would shelter and love me alone,
In the happiest bliss, a loving home,
A home.

While a heart is longing and looking above,
And yet must know it is unloved,
Unloved.

But sometime, someway the truth will be known,
For God will surely take care of His own,
His own.

Josephine E. Geyer is first listed in the Bozeman City Directory in 1908. She appears to have lived alone and supported herself by working as a manager at a local credit clearing house, and later at the Retail Merchants Exchange of Gallatin County. Josephine spent about ten years in Bozeman. She undoubtedly enjoyed the early years of the Sweet Pea Carnival, which was inaugurated in 1906. Sweet pea flowers and the Sweet Pea Carnival were common themes in early local poetry. Josephine joined other poets in her admiration of the event when she penned “Sweetpea Carnival.”

The Bozeman emblem, Sweetpea,
Found blooming everywhere,
All colors of the rainbow
‘Mid fragrant scented air,
Fills every heart with pleasure
Who view these handsome lawns
That make the city beautiful
In brightening up the homes.

The Sweetpea in full glowing,
The city grand arrayed
With people overflowing
To see the flower parade.
The telling advertisement
Covers land from sea to sea
Of Bozeman, famous city,
And Carnival Sweetpea.

The dainty flowers seem bowing
In gorgeous summer dress,
Give all a smile of welcome
That words cannot express.
Mountains seem to touch the sky
In grandeur o’er the scene,
Zephyrs waft the music strains
Like a delightful dream.

So each year they come and go,
The beauty to behold;
Year after year the Carnival
Seems never to grow old.
Bands from over all the state
Make music in the street,
Three days of constant fun and joy
Is Bozeman’s annual treat.

Geyer published a book of poetry titled Lest We Forget, likely in the 1910s. It contains poetry she wrote over the course of her adult life. Many poems relate to her experiences in both Kansas and Montana, and the people she knew in each locale. Josephine’s keen insight and gentle nature are reflected in her poems. She passed away June 19, 1930 in Sacramento, California.

For a Booklet of Pressed Flowers, Presented to a Lady on her 90th Birthday
By Josephine E. Geyer

These poor faded flowers that once were loveliness,
Because they are dim we will not love them less.
Their past life’s fragrance and beauty rare,
We think of and handle with tenderest care.

So the beauty of a soul that has been true
To goodness, meekness, mildness—
Age cannot hide from view. 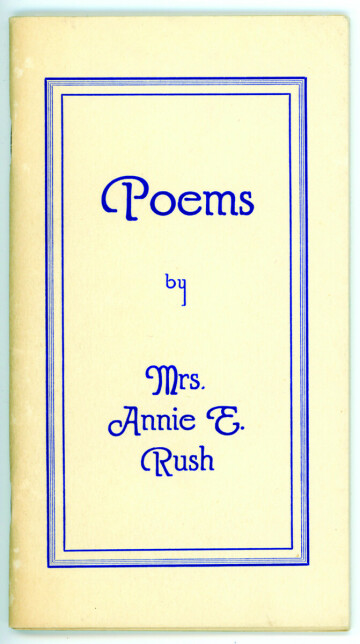 Another local poet, Anna Elizabeth Gurtisen Rush, was born in Iowa in 1872. According to her August 11, 1955 obituary in the Gallatin County Tribune and Belgrade Journal, Annie worked as a typesetter for a local newspaper in her hometown of Monona, Iowa. Perhaps this is where her love of writing began. Much of Annie’s poetry is short, like this verse showcasing the month of April.

April is a capricious Month
Of sunshine, snow and rain
But as the days go swiftly by
All nature smiles again.

Rain drops glitter on the grass
Like diamonds from the sky,
And sweet pea vines start climbing up
To greet the passerby.

Annie married George Rush in 1893, and after a few years the couple moved to Montana with their young daughter, Winnifred. They first settled in Whitehall before moving to Livingston, then to Bozeman in 1911. George Rush worked as a watchmaker in the G.J. Steffens jewelry store downtown until his death in 1924. After George passed away, Annie and Winnifred remained in Bozeman, where Winnifred worked for the Mountain States Telephone Company for several decades. Annie must have enjoyed observing people, and several of her poems contain great commentary on human nature.

How about this dieting?, it’s such a funny thing
At it, nearly everyone will take a wicked fling
Along comes a man, nibbling a hard, dry bun,
“I must be careful for I’m only one hundred-one.”
Grandpa drinks, eats meat, but tobacco will not chew
Yet he will worry, for he’s just one hundred-two.
Here is another, just as happy as can be
Does everything he chooses, he is, now, one hundred-three
But why rave on, for there are many, many more
Who all live quite sensibly, and are one hundred-four.

The Egotist
By Annie E. Rush

Who is this million dollar man?
Why, no one but “Pa” Fannigan,
And when his fancy has full sway
He makes a million every day.
He’s sure that if he had the chance
To sit down in the Mayor’s pants,
He’d have the town thrown open, wide,
And everyone would point with pride,
And tell with loudly, blatant voice,
“This man is sure the people’s choice.”
He has naught to do, but sit and dream
And when he “blats” he is a scream,
There’s but one other, such as he
You’ve guessed it? yes, b’gosh it’s me

Annie Rush passed away in Bozeman in August, 1955 and is buried next to her husband in Sunset Hills Cemetery. Two years after her death, Annie’s daughter, Winnifred Rush Dorsett published over seventy-five of her mother’s poems in a small booklet simply titled Poems, by Mrs. Annie E. Rush. In the front of the book Winnifred noted that the volume was “Printed in Memoriam to my Mother.” Several of the poems stem from local inspiration, such as this verse commemorating the beauty of the West Gallatin Canyon.

Across the river, the pine trees grow
And thru their branches, the winds whisper low
Of this self same road, when in former days
We traveled it, in a happy maze
Of tender thoughts, so long ago,
And sang to each other, “I love you so.”

We dream and sigh, for those by gone days
When we were so happy, in many ways,
And we’d give the world (were it ours to give)
To retrace our steps, and again to live
Those glorious years, so free from pain,
When we sang our song, with its glad refrain. 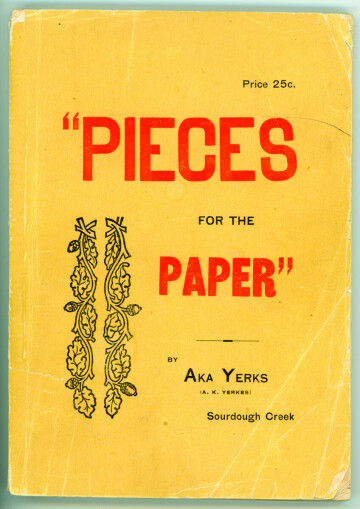 A. K. (or Aka) Yerkes was well-known locally as one of the founders of the Bozeman Weekly Chronicle newspaper. He started out as business manager at the paper in 1883, then became the sole owner from 1884 to 1891. Yerkes then co-owned the newspaper with Charles Fell until 1899, when the partners sold their interests. In the 1880s, the Bozeman Chronicle was a democratic paper, while its major competitor, the Avant Courier, had a republican bent. The Chronicle and the Courier were published concurrently for several decades in the twentieth century, but ultimately the Courier ended its run in 1954. The Chronicle continues to be published today.

In the nineteenth century, Yerkes’ chief competitor was William Alderson, who ran the Courier newspaper. In a 1906 Bozeman Chronicle reminiscence, Yerkes wrote that Alderson “had a sharp pen and the way he was wont to harpoon the ambitious who attempted to enter his chosen field might well make ‘angels fear to tread.’” With this stiff competition, Yerkes himself developed a sharp pen, as evidenced in these short sayings he included in his book “Pieces for the Paper,” published in 1899.

A Selection from Sourdough Sayings
By Aka Yerkes

The trouble with a great many persons is that they overlook the fact that they have two hands and only one tongue and try to make the latter outwork the former.

A Selection from Sourdough Slap-Jacks
By Aka Yerkes

We openly give credit to greatness, but in our own minds admit that there are a whole lot of things we could do much better.

In the introduction to “Pieces for the Paper,” Yerkes made it clear that the sole purpose of the work was entertainment. He wrote, “Contrary to all appearances, this volume of prose and rhythmic idyls was not written for the purpose of enriching literature or to in any way blight or blast the works of scholars, scientists or poets, who have been called masters of their art… It is the gratuitous advice of one who desires to furnish a book to which people can turn with pleasure and profit when it is too muddy to get into town or too stormy to saw wood. Consequently, it will not meet with an overwhelmingly large sale among politicians.” His poetry often records his thoughts on everyday topics familiar to Gallatin Valley residents.

The Army Mule
By Aka Yerkes

What is it, when in times of peace,
Is sold for forty plunks apiece,
Because his kind he can’t increase?
The mule.

What is it, driven with the lash,
Amid profanity’s awful crash,
Pulls patient, true, without a dash?
The mule.

What is it, when in times of war,
Gets grub and blankets to the fore,
And is the stay of every corps?
The mule.

What is it, though he came from Spain,
Will tote with fairness to sustain
The honor of this last campaign?
The mule.

Out in the Valley
By Aka Yerkes

It is bully in the valley, when the hay is in the cock;
When the oats and wheat and barley, are all standing in the shock;
When the thresher, in the distance, puffs its smoke off in the haze,
And on top of highest foothill, all loose stock is turned to graze.

Then the hunter with his shot gun, and a high-priced running cur,
Tramps ten miles in chasing “Fido,” worth about a quarter per;
The farm hand gets some wagon dope, and then with free hand smear,
Writes on a board, in letters bold: “No hUnTIn ALouD In HeeR.”

Geyer, Rush and Yerkes are only a few of Bozeman’s amateur poets who used their talents to delight, entertain and document local life. They pioneered a tradition in creative writing that continues to this day.