Originally located on West Lamme Street in 1920, Bozeman Deaconess Hospital has a rich history worth preserving. Many of our citizens were born there and have relied on its services for years. Although the hospital itself relocated in 1986, this building remains as a testament to Bozeman’s aspiration to be a first-rate city, with the state’s second largest Deaconess institution. This building is in imminent danger of being demolished by developer HomeBase Partners unless people speak up and convince the City Commission that we cannot afford to lose our history. Public comment can be submitted to the City Commission at: agenda@bozeman.net.

Remember when Bozeman Deaconess Hospital announced its new name as Bozeman Health? Well, it’s hard to turn your back on those who created you: the Highland Boulevard complex is now known as Bozeman Health Deaconess Hospital. Besides being a way to connect with patients, this name speaks volumes about the founding sisters of Bozeman’s primary health provider. You’re probably asking: “Who are these Deaconesses to whom we owe our healthcare?”

According to historian Ellen Baumler, “The Deaconess Movement rose from within the Methodist, Lutheran, Episcopal, and other Protestant denominations. It sought to incorporate professional women in ministerial duties. The Chicago Training School was the center of the movement and prepared its Deaconesses to serve as missionary nurses, teachers, and social workers… These dedicated pioneers earned no salaries, but rather worked in exchange for their living expenses and small stipends supplied by their institutional boards.”

In 1911, the City of Bozeman entered into an agreement with the Methodist Church to buy an existing Victorian-era sanitarium at the corner of Lamme Street and Tracy Avenue. The Methodist Deaconesses managed and staffed the hospital. They also launched a fundraising campaign to build a larger facility to serve the population of Gallatin County as it grew to 15,864. As of February 1918, Miss Edith R. Ackerman, the hospital’s superintendent, announced that the hospital campaign had raised nearly $100,000. The new building was completed in 1920, located west of their first building, which was then adapted as housing for the Deaconesses. This new facility of four stories was designed by Bozeman architect Fred Willson, in an L-shaped plan announced with a two-story neoclassical entry porch. The state-of-the-art 50-bed hospital building was beautiful and well received. The massing and detailing with warm tapestry brick, stone trim, and terra cotta ornament in the multiple cornices, ionic column capitals, and belt course made the Deaconesses and the citizens of Bozeman proud. This investment in our community’s civic future was a significant harbinger of the expansions to come. 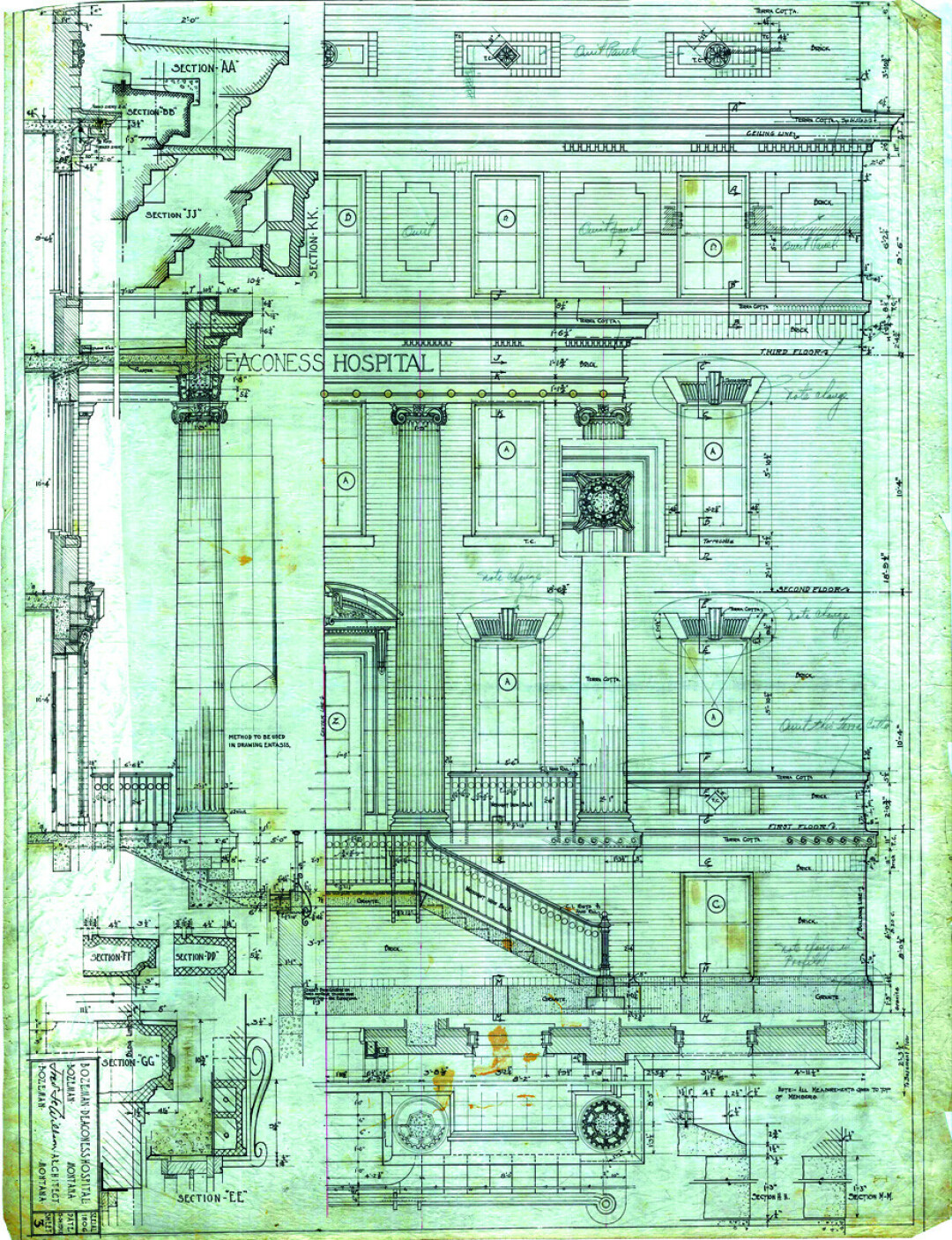 The hospital continued to grow, with Fred Willson providing architectural services through May 1956; he died in August that year. The changes included the sizeable 1944 addition of a Nurses’ Dormitory. This three-story building anchors the west end of the site, spanning from West Lamme to West Beall Street. It was later remodeled to provide 104 rooms for patient services. In 1944, the last of the Deaconesses retired and the original Victorian sanitarium/Nurses Home building was also converted for patient services. Modern laboratories, equipment and services were continually enhanced, with an intensive care unit added in 1969. The final addition was completed in 1971, at a cost of $1.7 million. This two-story, cross-shaped building borders two sides of the intensive care unit that sidles up to the 1920 entry. The whole hospital complex covers the full block defined by West Lamme Street, North Willson Avenue, West Beall Street, and North Tracy Avenue on the east.

The growth of Gallatin County continued unabated, yielding a population of 42,865 in 1980. At this time, the Lamme hospital complex was considered too small, and didn’t fulfill the need for a modern acute care facility. Planning ahead, in 1956 the hospital administration had purchased 500 acres of land near Sunset Hills Cemetery. When the new 86-bed hospital was completed on Highland Boulevard in 1986, the original hospital building was converted into public housing; the surrounding additions were used for senior nursing care.

The original hospital site was included in Bozeman’s Architectural Inventory in 2014. At this time, the 1920 and 1944 buildings were considered eligible for listing in the National Register of Historic Places under three criteria. This threefold level of significance is reflective of the importance of this building for its response to the growth of Bozeman, for the historic prominence associated with Fred Willson’s designs, the sophistication of our medical care system, and for architectural merit. These fine, well-built buildings—all of brick and stone with durable interior finishes—remain stalwart reminders of how far our town has come over the years. Bozeman Deaconess has supported, and been supported by, our citizenry since the original 1918 fundraising campaign. The hospital remains Bozeman’s largest employer, and still provides training for our nurses, as it did in 1919. These are buildings we need to cherish and continue to adaptively reuse in creative ways—however, this is not the strategy of the firm developing the site that contains the original hospital. 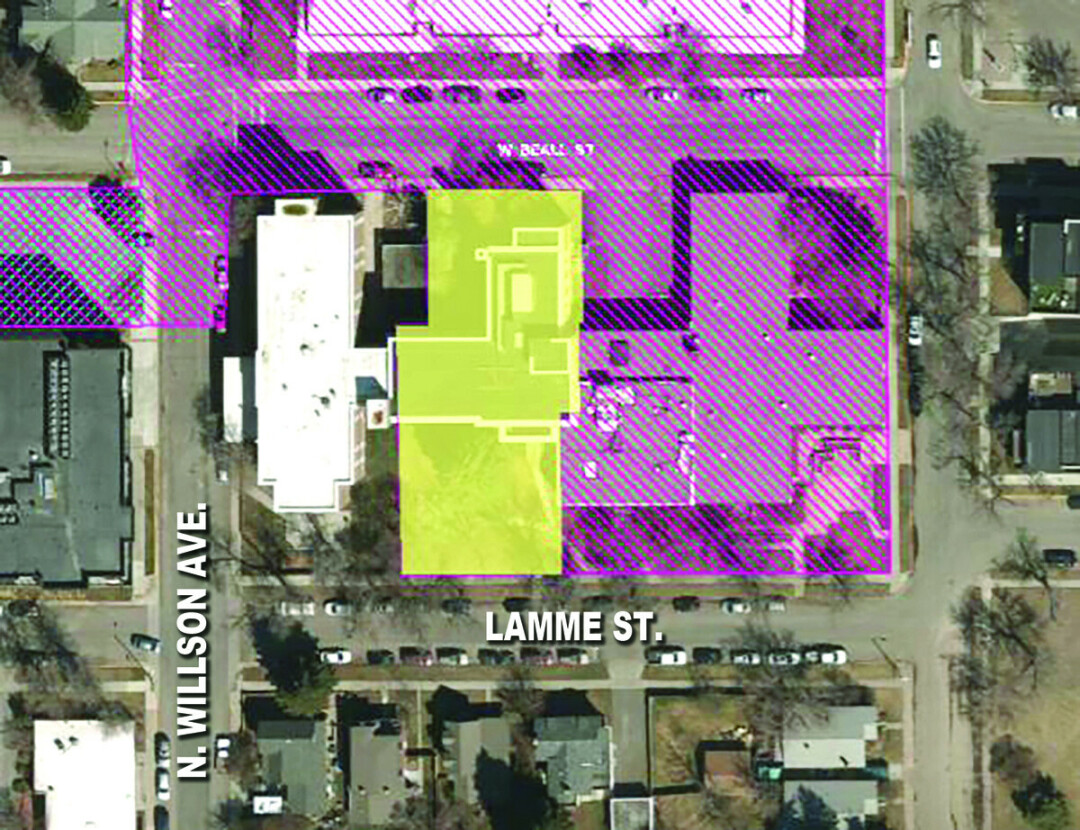 The current plan for the full-block site, to be called “The Henry,” is to provide 44 condominium units in a six-story, 70-foot tall building. This new project, by HomeBase Partners, includes the demolition of the original 1920 Bozeman Deaconess building. The Development Review Application—available on the city’s interactive planning website, https://gisweb.bozeman.net/Html5Viewer/?viewer=planning—cites the building’s structural inadequacies as the reason to demolish it. The developer tries to soften this blow by stating the desire to salvage and repurpose as much of the historic material as possible. This is unacceptable for three reasons: First, buildings of this vintage are structurally upgraded on a regular basis. The construction and configuration are well suited for other occupancies. Second, the designs for The Henry do not offer this classical character and solidity. Third, reusing bits and pieces of this historic building is insulting. It implies that the parts will tell the story that the whole is far better equipped to do.

This is not the first instance of casting aside our heritage in Bozeman. Instead, if the building is retained, it could be another instance of celebrating our history. Look at most of our buildings along Main Street and the care that has been taken to structurally improve them. Look at many other communities that take pride in their historic buildings and reuse them. What’s next to come down – the Baxter?

Lesley M. Gilmore is a historic preservation architect based in Gallatin Gateway, MT. She has served on Bozeman’s Historic Preservation Advisory Board and currently serves on the Board of Directors of the Extreme History Project. Photos supplied by Scott Carpenter, InteResources Planning, Inc., Bozeman.

________________________________________
Listing in the National Register of Historic Places – or being deemed eligible for such listing – does not protect a building unless federal funding is used OR a local preservation ordinance requires a binding review of work proposed on a National Register property. Bozeman’s Historic Preservation Advisory Board or Historic Preservation Specialist would normally review development in the Neighborhood Conservation Overlay District (which this site is in), except in cases where the Chief Building Inspector has determined that the building is structurally unsafe. This classification—whether considered temporary or repairable or not—means that the building receives no support or guidance from our city’s preservation board, whose purpose is to “maintain neighborhood character, protect the integrity of historic structures and provide public notice to adjoining property owners of potential changes.” The city’s website boasts that “Historic Preservation is an established priority of city planning in Bozeman. Preservation goes beyond saving old buildings, it creates a unique sense of place and of community, and bridges the gap between the past and our future. Preservation is about recognizing and celebrating what our community values and ensuring it can be enjoyed by future generations.”