The Intersection of Art and Science

In 2011, Stella Blue Woods was a boisterous Bozeman preschooler with a bright future. Her father, Andy, was a self-employed tile setter and her mother, Andrea, was a stay-at-home mom when, at just four years old, their daughter was diagnosed with anaplastic Wilms’ tumor, an aggressive kidney cancer. The Woods’ were told that even chemotherapy, radiation and surgery were unlikely to save their daughter. “The diagnosis was a shock, and definitely a life-changing experience for all of us,” Woods says. “For me, the thought of losing her was really scary. I wanted to fight this as hard as we could and I wanted her to survive, no matter what we had to do.”

For Andy, this meant setting out to find “new and more-promising research,” which he hoped would lead to better therapies that might be more effective against his daughter’s cancer. “I would spend all my free time reading. I would wake up at five in the morning and pour over research articles, trying to learn ‘the language of science and of cancer,’ and looking for research which might be more promising for Wilms’ tumor,” he relates.

“Ultimately, she never needed the drug,” Woods says. “She went through aggressive treatment, including a stem cell transplant, which drove her into remission, where she has remained ever since.” But Andy was hooked. He had become passionate about children with cancer, science, and cancer research. “I knew I wanted to keep helping children with cancer.”

He considered fundraising to support science devoted to childhood cancer; “but, I’m a terrible fundraiser,” he freely admits. Instead, he decided to make a mid-life career change and become a cancer researcher. “There’s this problem in children’s cancer,” Andy says. “You have these very rare cancers which only affect a small handful of patients each year. Because there is no money to be gained from treating a few patients a year with a very expensive drug, no one is interested in funding research into these cancer types, leaving children with no good therapeutic options. I thought that if I were able to become a researcher, I would be able to find a way to study these rare pediatric cancer types in need of more-promising therapies.”

Having no internet access at their home in Trail Creek , Andy would go to the Café M coffee shop early in the mornings and “work on cancer.” As Andy became a regular at the local coffee shop, he noticed another fellow there nearly every day as well. When Andy and Stella were invited as guests of honor to a local fashion show, he noticed “that guy” was also there.

“That guy” turned out to be local artist Luke Avery, whose paintings had been turned into the clothing being modeled at the fashion show. Andy loved the abstract designs, patterns, and colors of Luke’s work, and it reminded him of some of the amazing microscope images of cancer cells he had been studying. Shortly after meeting at the fashion show, Andy approached Luke in the coffee shop and said; “I really like your artwork, come take a look at this.” On his laptop were pictures of live cancer cells. Luke was instantly amazed at how perfect they were in their abstract form. Although terrible in what they represent, to Luke, they were beautiful. Andy then explained how he had been doing cancer research and advocacy work, and had recently taken a job at a cancer research lab, where he would be studying his daughter’s type of cancer. He told Luke, “As much as I hate cancer, I am amazed at how beautiful these images are, and I think they kind of look like your artwork.” 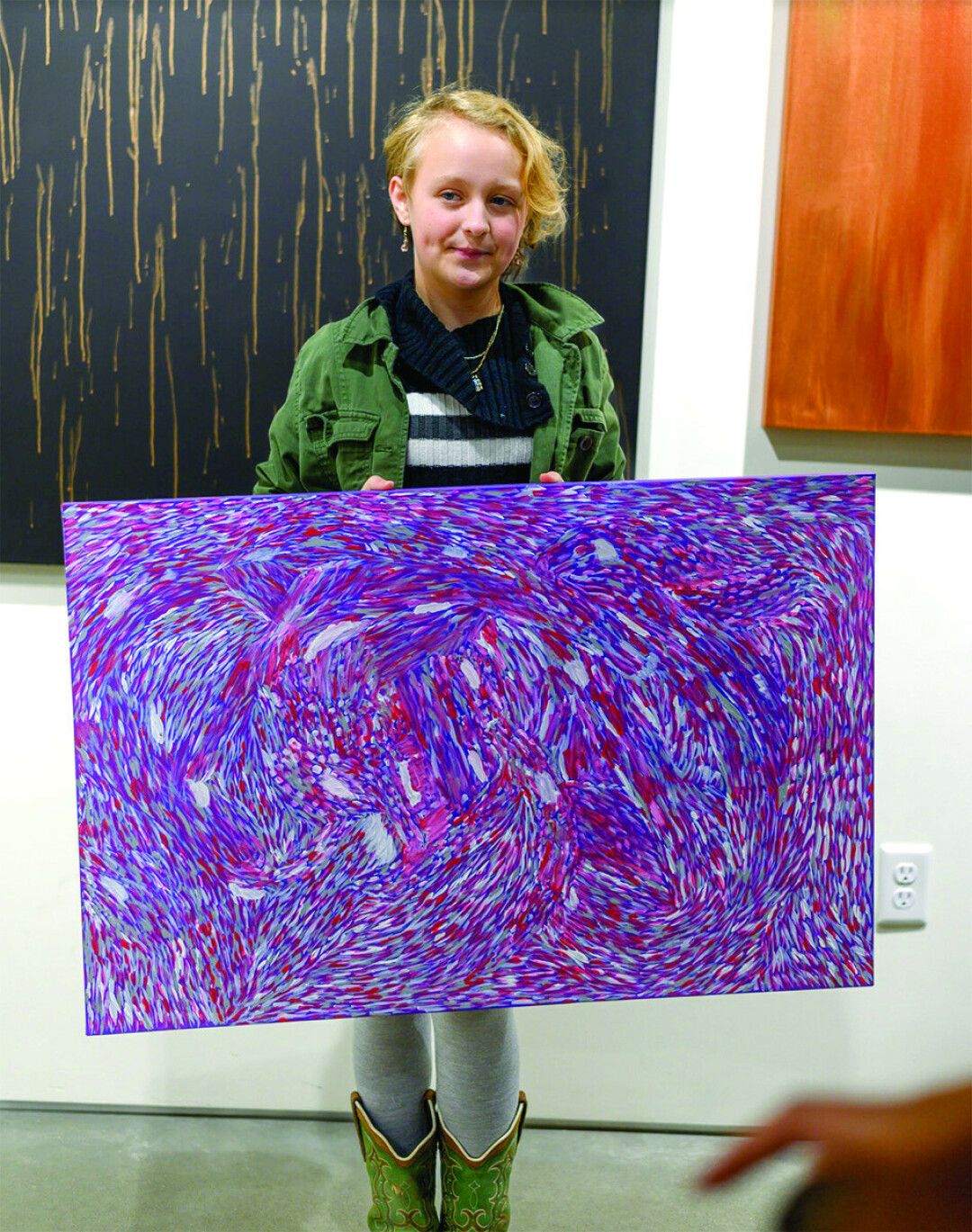 Andy asked Luke if he would be interested in attempting to replicate cancer cells through abstract painting, and sent him some photos with which to begin. While Luke found it difficult to capture a visual comparison to the photos, he was able to produce five paintings. In 2017 the paintings were sold at auction, with all proceeds going to Andy’s research at the Children’s Cancer Therapy Development Institute. In 2020, Andy sent another cancer cell photo to Luke and asked if he would be willing to paint it for a new research publication.

“To put it mildly, I was thrilled.” says Luke. “Living through the 2020 pandemic has been very difficult for so many people, and I have been no exception. I have been forced to take early retirement due to my own health issues, so when Andy reached out to me, it gave me something to focus on. The painting was unlike anything I had done before,” he says. “I studied what I had done so far and came to realize that more experimentation was needed. I mixed water, oil, resin, ink, clay... the end result was a mess.”

After weeks of studying the work of artists past and present, photos, letters, etc., Luke found what he was looking for. By using techniques inspired by Vincent van Gogh, Luke used hundreds of tiny brush strokes painted at different speeds to give the cancer cells a sense of motion. The end result was a painting called “Abstract #1308, EZ-PZ.” Luke describes the painting as, “Not a replicate or a rendition but, simply, an interpretation from a human of an abstract object.”

When Andy submitted his paper for publication, he included Luke’s painting, and proposed that it be used as the cover art when the journal was published. “I thought it was a long shot to put a piece of abstract art on the cover of a scientific journal” Andy says, “but the editors loved the idea, noting that the arts and sciences commonly intersect. The paper was published in the October issue of Cold Spring Harbor Molecular Case Studies. The painting will be auctioned off, with proceeds going towards Andy’s research at cc-TDI.

The painting is still available (bidding has not yet met the reserve) and you can see it at https://www.4letterproductions.com/cancerpainting.

“The whole project has been really fun,” says Andy. “It has shown me an interesting overlap between the arts and the sciences. Luke’s artwork and his generosity towards children with cancer is inspirational.”