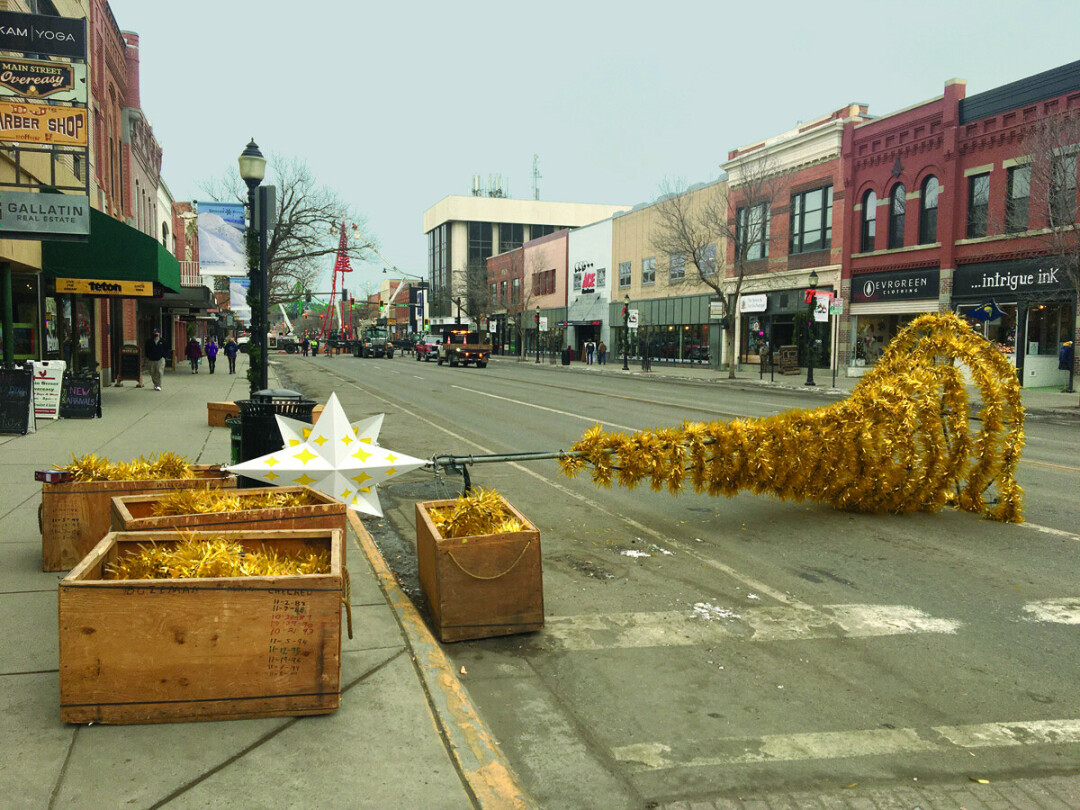 Each year after Thanksgiving, Bozeman’s Main Street is transformed into a holiday wonderland. Most popular among the downtown decorations are the giant garland cascades hanging over the Willson, Tracy, Black, and Bozeman intersections. For over fifty years, the installation of this iconic décor has marked the start of the holiday season. These giant nets of garland and light have been called everything from “trees” to “bells” to “spiders,” though a closer look reveals that the central decoration hanging above each intersection cascade is a cone-shaped frame topped by a spectacular, lighted star.

Even before this popular ornamentation was introduced in the late 1960s, the Bozeman Chamber of Commerce and the Bozeman Fire Department were heavily involved in making sure downtown Bozeman was decked out for Christmas. Local businesses and organizations assisted with holiday decorating during these early years. Newspaper accounts frequently attribute installation help to Sigma Nu Fraternity from Montana State College, Rainbow Sign Company, Mountain States Telephone Company and the Montana Power Company. A Chamber of Commerce Christmas Decoration Committee worked with the Fire Department and other volunteers to design, install and maintain the decorations, traditionally put up during the week following the Thanksgiving holiday. In the early 1960s, popular adornments included varying combinations of artificial and real trees, and other ornaments affixed to light poles on Main Street and North Seventh Avenue.

The Chamber of Commerce received donations from businesses and private citizens to help cover the cost of holiday decorating and, at times, funds trickled in at a snail’s pace. In 1965, Chamber Decoration Finance Chairman Clare Cousins lamented to the Bozeman Daily Chronicle; “‘Financially, money for the new decorations is coming in quite slowly. It is hoped that by the time the decorations are up we will have obtained enough money to pay for them.’” Thanks to the generosity of local businesses and individuals, downtown Bozeman holiday decorations have remained a tradition, year after year. 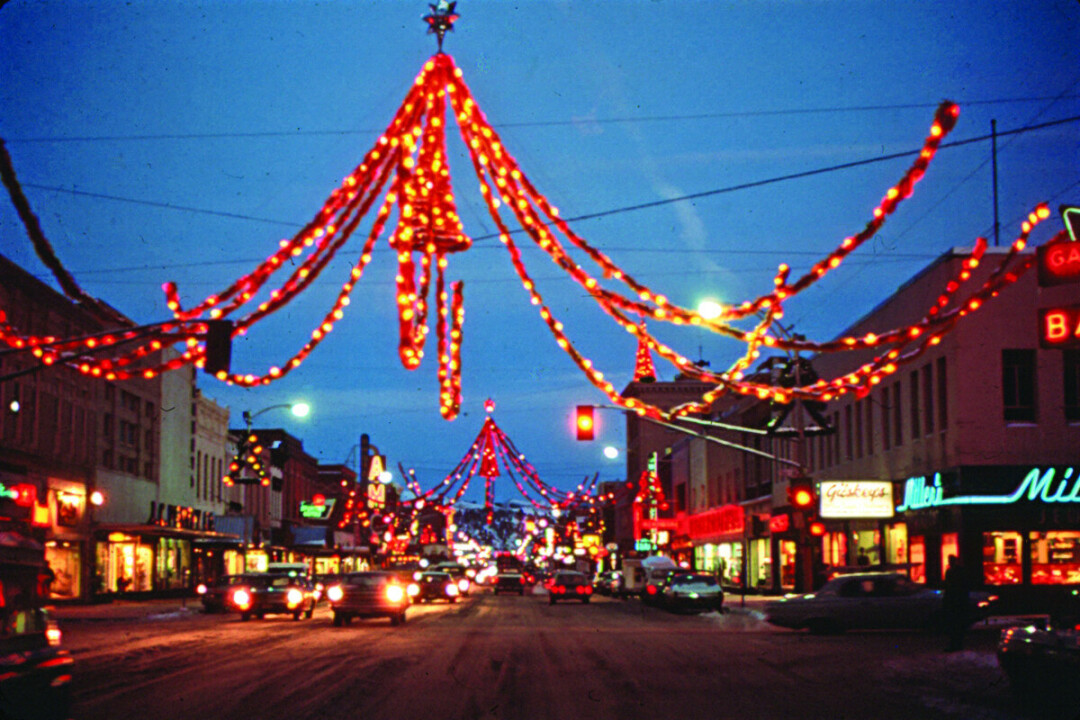 The early history of today’s beloved “spiders” seems complex. Newspaper photographs and recollections suggest that in the early 1960s, local residents enjoyed a precursor to the holiday garland cascades that would later grace downtown intersections. A Bozeman Daily Chronicle newspaper photograph from December 22, 1961 depicts a Bozeman fire truck and workers installing garlands over Main Street. In the newspaper photo, the strands are suspended from a central point high above the street, similar to the design of today’s decorations. These early garland strands were of natural evergreen, not the brightly-colored iconic white, gold, red, and green garlands we see today.

On December 28, 1965, the Chronicle reported on the decorations planned for the upcoming holiday season. Chamber of Commerce decoration chairman Don Fletcher described the plan, which included a gold 30-foot tall, 500-bulb lighted tree that would be placed on a to-be-determined street corner. Three new 47-foot long ‘lighted greeting banners’ were to be installed near the city’s entrances on North Seventh, West Main and East Main. “In addition,” he wrote; “evergreen garlands with center-lighted ornaments will bedeck the intersections on Main, and lighted silver trees will be placed on the light poles.”

The popular large golden tree from 1965 returned in 1966, along with the three holiday greeting banners and the customary live and artificial Christmas trees. This time, the oversized gold tree was “suspended above Main Street at Tracy,” a location the current golden ornament occupies today. Whether the gold tree used during the mid-sixties is the same ornament as the current gold “spider” remains unclear. 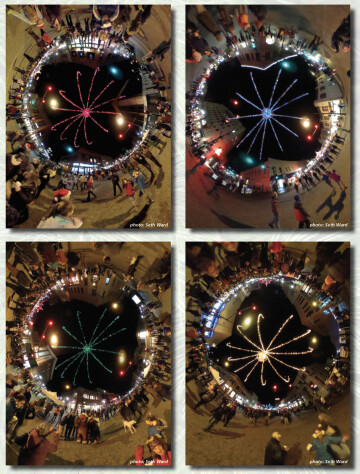 What does seem certain is that the white/blue, gold, red, and green intersection cascades we know and love today were purchased one-at-a-time from DiJulio Displays, a Washington State company. Not quite so clear is in which order the different colors were purchased and installed. Some longtime Bozeman residents claim the gold ornament at Tracy was the first to appear, while others remember the red or green ornaments as being the first. If the gold cascade was first, is it possible it could be the same ornament described in the 1965 and 1966 Bozeman Daily Chronicle articles? The document “Unofficial History of Downtown Bozeman Holiday Decorations,” compiled by Travis Barton in 2011, indicates the green cascade started things off. Perhaps more time and research will tell.

The particular intersection assigned to each colored ornament has seemed to remain fairly stable through the years. Close examination of photographs from past holiday seasons suggest that, traditionally, the white ornament with blue lights hovers over Main and Willson, the gold ornament shines over Main and Tracy, the red ornament covers Main and Black, and the green ornament watches over the intersection of Main and Bozeman. 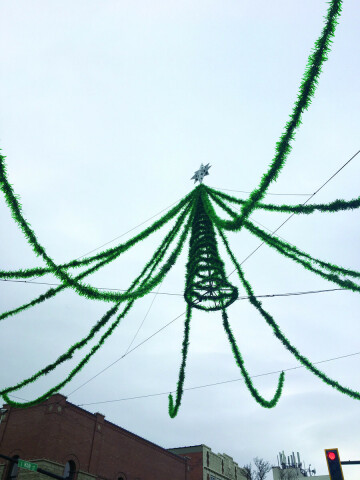 It wasn’t long before the decorations picked up the “spider” nickname. A newspaper photograph of one cascade (unfortunately, microfilm shows it in black and white), taken from directly below during installation, appeared in the December 1, 1970 issue of the Bozeman Daily Chronicle. The caption heading, “Giant Spider?” was followed by the reassurance that “No, it’s an underneath view of Christmas decorations being put up on Main Street in Bozeman.” The “spider” nickname has apparently been floating around the community for at least fifty years.

The ornaments themselves are massive. According to the “Unofficial History of Downtown Bozeman Holiday Decorations,” the central cone ornaments stand 24 feet tall, without the star on top. Garlands, lights, and the star are added before the centerpiece is hoisted above the middle of each intersection and attached to cables. Next, twelve long garland “spider legs,” which vary in length from 43 feet to 67 feet, are attached to the top of the central cone, and fan out over the intersection. Installation takes the combined efforts of the Bozeman Fire Department, Bozeman Forestry Division, Bozeman Streets Department, Bozeman Arborcare, and Montana Crane, among others. For many years, the lights were manually turned on and off by the Bozeman Police Department, until a timer system was added in the early 2000s.

A holiday decoration plan of this magnitude requires an abundance of funds, organization, labor, and storage space. Regular upkeep of these massive ornaments is essential to their installment on Main Street year after year. Between replacing worn sections of garland, bulbs, and support cables, and tackling rewiring projects, yearly costs to keep the decorations going can amount to several thousand dollars a year. The Bozeman Fire Department still handles most of the repairs. One firefighter is traditionally tasked with supervising the project, and past “spider” supervisors include Bruce Thompson, Geoff Hoell, Casey Holling, and Travis Barton. In recent years, Barton and Chris Naumann, former executive director of the Downtown Bozeman Partnership, were instrumental in keeping the tradition alive. 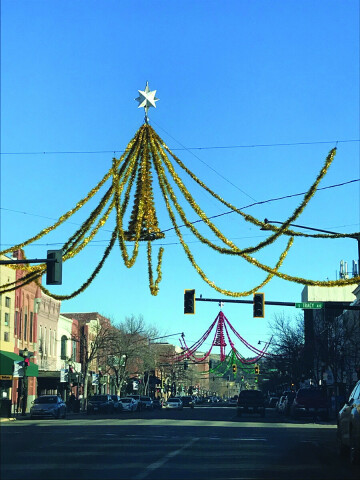 In his “Unofficial History,” Travis Barton reminisced, “Thousands of bulbs were replaced each year, either broken, burned out or because the coloring had worn off (darker colors wear faster). Both on and off-duty firefighters participated in the maintenance. There are numerous stories of ‘bulb wars,’ which involved throwing bad bulbs towards your fellow firefighters for days on end. The carnage would be swept up at the end of the day and could often fill a 55-gallon trash can.” In 2014 the spiders received new steel star toppers, expertly created by Travis Barton of Barton Fabrication and the Bozeman Fire Department. Barton ended a 20-year-long career with the ornaments in 2019.

Finding a storage location large enough to accommodate the “spiders” for nearly eleven months of the year has also been a challenge. According to the “Unofficial History,” the cascades were first housed below the Stylon women’s clothing store at 18 East Main Street, because there was a large rear entrance for easy loading. A close examination of Bozeman city directories and Sanborn Fire Insurance maps from 1904-1958 reveals that the Montana Power Company was located in this building for over forty years before the Stylon clothing store occupied the space starting in about 1966. There is a loading door in the back, so if this building was used to store the “spiders” in the early years, it would have been a convenient location. Later on, Mergenthaler Transfer and Storage housed the decorations, and today they are stored in large wooden crates in a storage unit.

By 2002, it was obvious that the aging decorations needed considerable work on their electrical wiring, light bulbs, and support cables. By this time, the Downtown Bozeman Partnership was heavily involved with ensuring the decorations continued to go up year after year, and the group put out a plea for help. Petitions circulated and hundreds of locals, including Terri Sullivan of Downtown Antiques, added their support to keep the holiday tradition alive. Research in 2003 concluded that the cost to replace each ornament with a brand-new version would be $6,000-$8,000 apiece. Thanks to local support and a $10,000 contribution from the City of Bozeman, the existing ornaments were treated to major restoration work. Since then, cables and building anchors have also experienced an overhaul.

These well-loved holiday intersection cascade ornaments, or “spiders,” are an undisputed Bozeman icon. Many locals can’t imagine a season without them. It is the author’s hope that this humble attempt at a history will lead to the contribution of much more information and memories. Thank you to everyone who has been a part of this tradition over the years, for helping to make Bozeman’s holiday season special and unique. Whether you view them as trees, bells, or giant arachnids, enjoy Main Street this year with, in the words of a December 27, 1966 Bozeman Daily Chronicle article, “its colorful holiday attire.”

What happened to the Green Spider in 2021? – You may have noticed that the green spider is missing this season. The short story is that high winds blew the spider over about 15 minutes before the Santa Parade at the Christmas Stroll. Crews came out and removed the spider during the event. It will be down the remainder of the season but we are hopeful for the return of the green spider next year.

Seth is a first-generation Montanan, navigating fatherhood, marriage, business and downtown life (on a budget) in the New West. He is a freelance photographer, web designer, and aspiring artist.