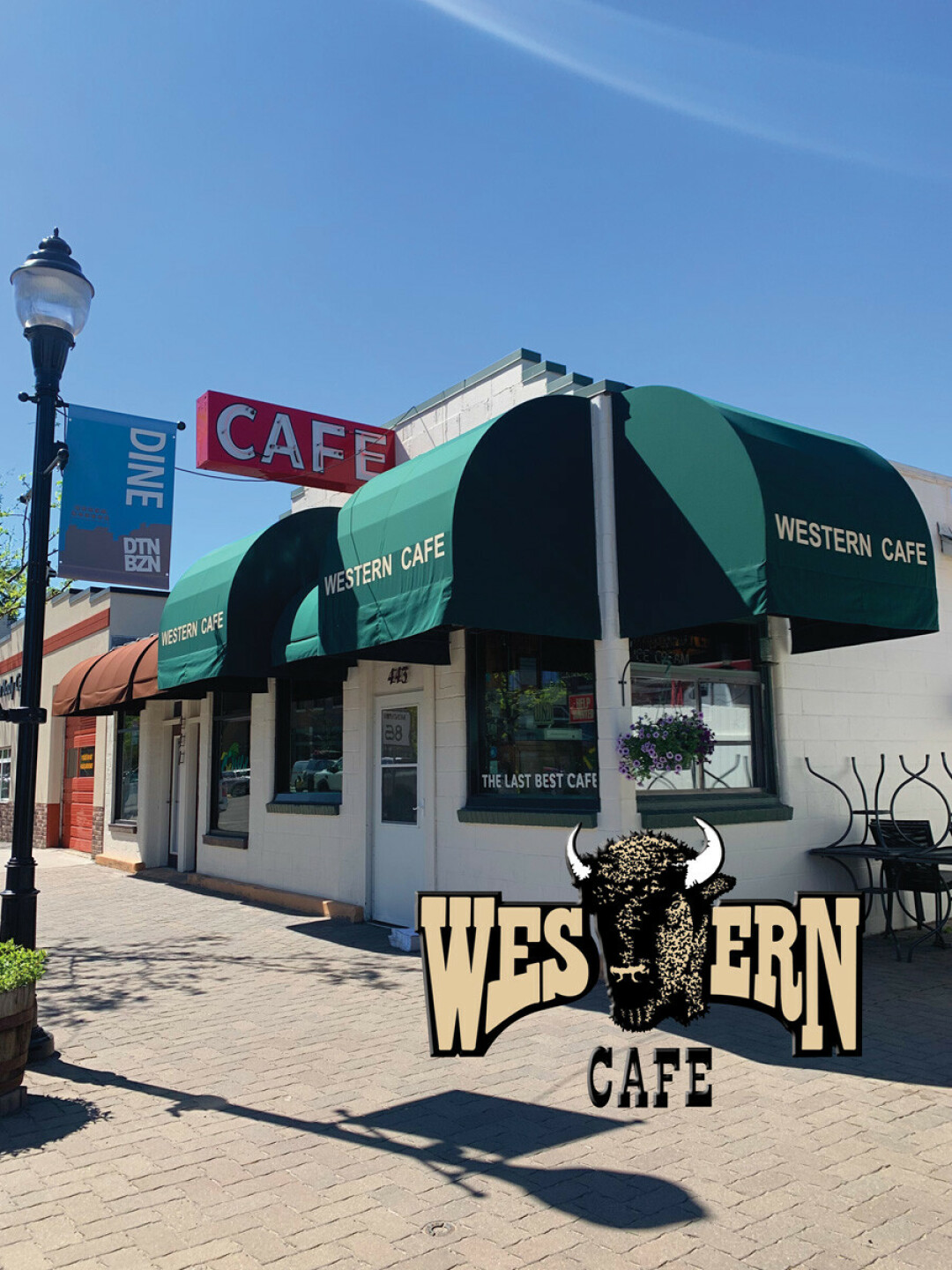 Nestled in one of the oldest buildings in Bozeman, Western Cafe has truly stood the test of time. This iconic cafe is a tribute to the past; a homey oasis amid the everchanging outside world. Owner and operator Sue Sebena walked me through the historic restaurant, pointing out apple cookie jars from her childhood, an old milkshake machine, powder rifles, and a butter churn. She shared the stories behind some of the photographs, relics, and artwork that cover the walls, and let me in on what makes Western Cafe so special.

Sue Sebena: It was a house, and then it became a cafe. And it’s been a cafe, and it’s been owned by different families throughout the years. I got it thirteen years ago, and I love it. It’s fun. It’s a lot of hard work, but I meet the most fantastic people. People from all walks of life come in here.

ER: What do you want people to experience when they walk through your doors?

SS: A cafe the way they used to be - the old diners where you sit at a counter and people come in, and they’ll converse a lot easier when it’s a counter, you know.

I’ll tell people to put their cell phones away and just talk. I had a bunch of bikers at a table and they were all on their cell phones. And I said, I’m just gonna confiscate them. They laughed.

But it’s that; it’s that old feel, that old flavor of sitting down and having homemade mashed potatoes and gravy and a hot beef sandwich, like it used to be. Really good burgers, old fashioned breakfasts, you know, chicken fried steak and bacon and eggs and big ham steaks. 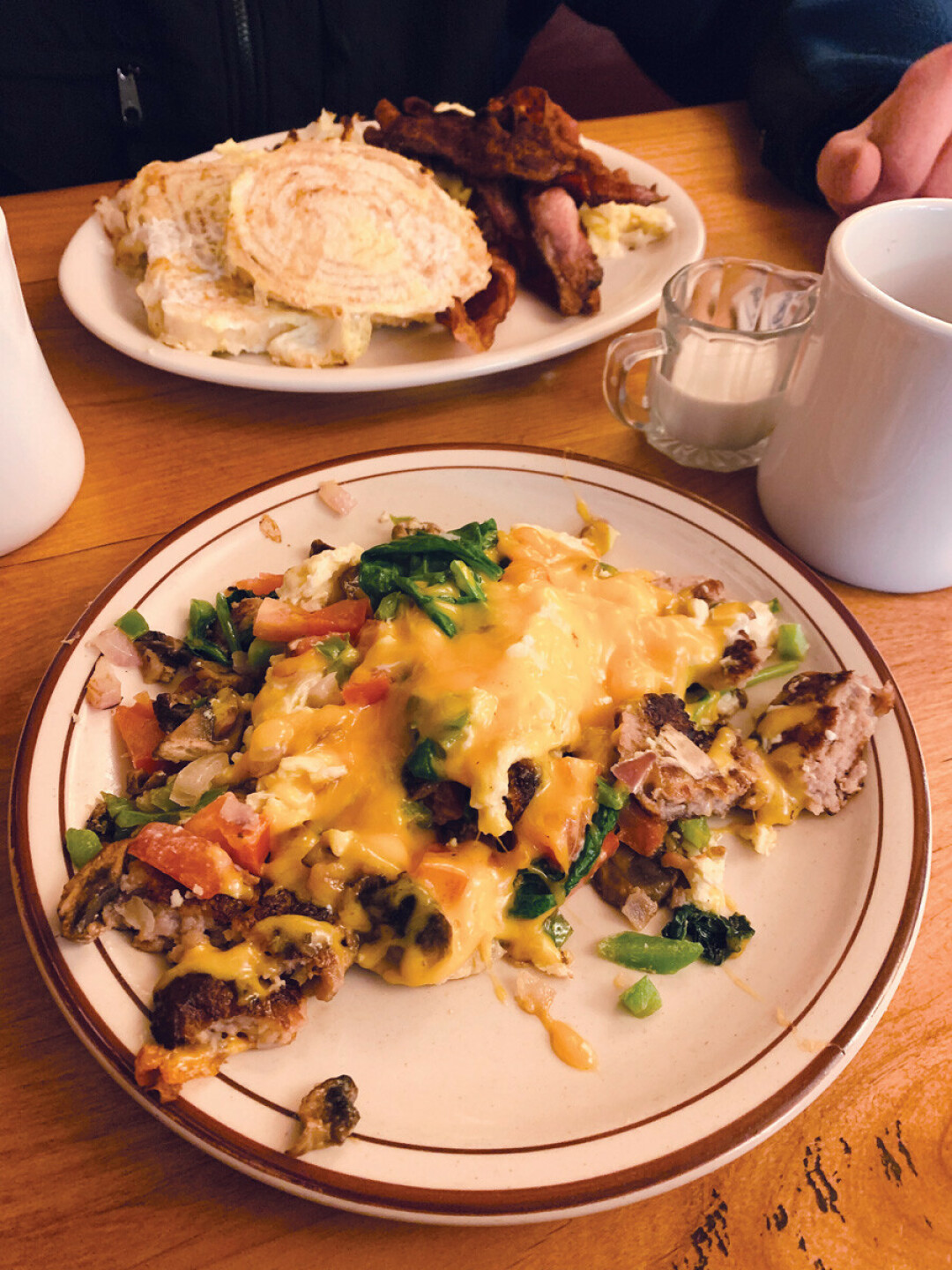 ER: What makes you unique in the Bozeman food scene?

SS: That is it. There are a lot of neat, trendy places in town that are fabulous, no doubt about it. But very different.

And we have our chicken fried steak that we’re famous for, and we have a Bobcat Special, which is our cinnamon roll that’s cut into french toast, more or less. That’s huge. It is very good. And a tribute to Manny; he used to own a little restaurant, really more like a diner, at the end of North Seventh. And he used to feed the college students, and he’d feed them a big hamburger steak. So that’s why I have the Manny Steak up there on the board. That’s a tribute to him and all his years that he was here.

And most of our stuff is local; we use local hashbrowns, local eggs. As much as we can, if not all, we buy local. That helps the community as well.

We also have a cute little patio that we put together in the summertime; we’re just cleaning the pavers now. I don’t know if you noticed when you came in, but those are permeable pavers where the rain goes down into the ground. And we’re cleaning them out, putting chips in between, so they remain that way. And then we’ll put our umbrellas and tables out and it’s really colorful and nice. And then, in the back, we have a couple of flower gardens. And that just adds a little color and warmth and you can see that it’s a house, from the back more so than anywhere.

And it’s nice for the kids; they’ll come and we’ll bring them out there. I like to take the little kids when the moms and dads are eating and carry them around and show them everything. It gives the mom a chance to eat and me a chance to hold a cute little baby. 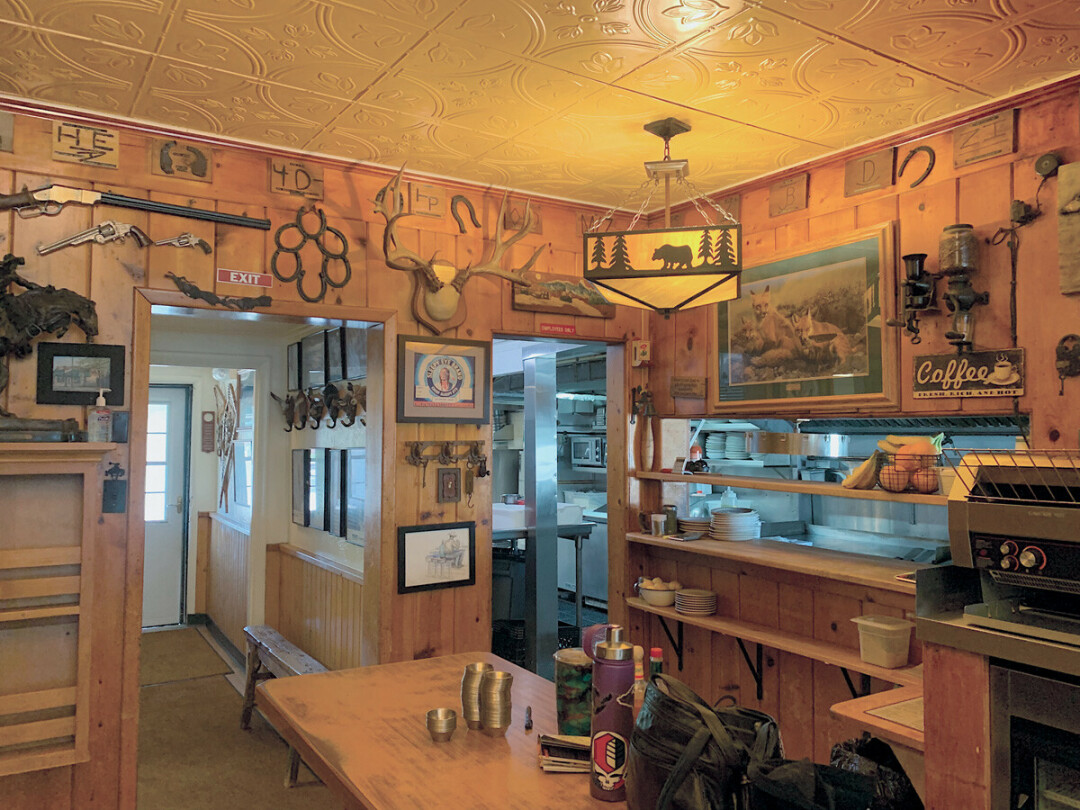 ER: What do your regulars keep coming back for?

SS: Conversation at the counter, good, inexpensive food that’s homemade, and recognition: calling them by name. I mean, Amy probably knows everybody that comes in here by name, and she’s happy to see them and talks to them about where they’ve been. She’s very, very personable in that way.

For the most part, to the people that come in, that come in every day, we’ll say, ‘hi, hi Mike, have a seat at the counter, grab a seat.’ You know, it’s pretty laid back for the most part. When we get busy, though, we do have to seat people because it’s chaotic.

But the people that come in here come in for the hospitality, the warmth, the genuineness, and the fact that it’s simple, old school, and it’s been here for so many years. It’s the oldest building in Bozeman now, I believe. It’s got all of the little oddities about it, and I’ve just done everything I could to preserve that.

In my free time, I go and look for things to put up on the walls that are older and add to it, and I have people giving me things to put up. It’s all taken a few years to accumulate.

So that’s what makes up the personality of this place; the people that come in here and the stuff that they bring in because they want it to be here as part of the cafe.

Like this Bobcat head [points]; this gentleman brought it in. He’s an older guy, probably in his 70s, and he brings this box in here, and I have no idea what I’m getting. And I opened it up and here’s this Bobcat head.

And this [points to framed sketch], a Native American gentleman came in and drew that while he was sitting here, just while he was eating.

We have people that come in every day; every single day. A lot of singles, a lot of families, just such a wide mix. A lot of students, just everyone. You know, I feel really fortunate. 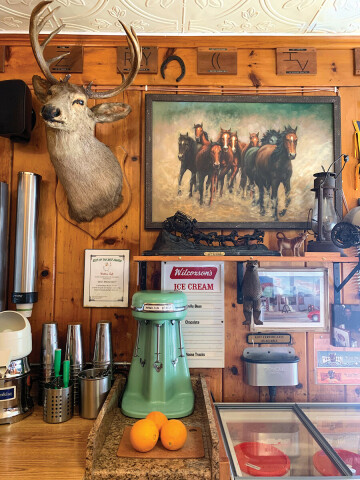 ER: What do you enjoy most about being a part of this community?

SS: The people. Hands down, the people. It’s fun. And I love the people I work with. They’re incredible. Really nice, hardworking, friendly, super friendly to the customers. I think that makes a difference. You’ll go in and you get that feel, that warmth. ‘Oh hi, how are you? Good to see you today. How is your sister?’ I’ll come in the morning and the place is just humming, it’s just got a life of its own.

And, granted, there are wonderful new places coming in. But how many of the old places are there in a lot of the towns anymore? People look for a place like this, and they’ll come in and they’ll say, ‘This is exactly what we were looking for!’ It’s really special.

ER: Do you have anything coming up that you want readers to know about?

SS: We have a movie coming out on the Hallmark Channel. I don’t know when it’s coming out, but they filmed that a couple of months ago. And we did have Pizza Masters in here a few years back. They went through and did that, and that was on TV.

At Western Cafe, you are sure to find not only a delicious home cooked meal, but a community as well. So next time you find yourself on Main Street, pop in, find a seat at the counter, and sip hot coffee while trading stories with regulars and newcomers alike.

Elsa Russell is studying English and Food Studies and enjoys spending her free time in the mountains and in the kitchen.