Perched somewhere between indie, desert rock, and ragged Americana, Way Out West is King Ropes’ fourth record, and finest to date. At the center of it all is Dave Hollier, a gifted lyrical songwriter at the top of his game, surveying a land haunted by doomed relationships and hypocrite ideologues in his signature quivering voice, which falls somewhere between The Mountain Goats’ John Darnielle and Silver Jews/Purple Mountains’ beloved David Berman.

For King Ropes, Way Out West is more than just an album title — it’s a guiding principle. The Bozeman-based band has carved out a distinct sound that evokes the vast openness of where they’re from. After settling in Montana in 2017 following extensive stints in Brooklyn and Los Angeles, Hollier recruited an inner circle of West Coast musicians to record and tour with, notably bassist/guitarist Ben Roth (Oberhofer/BOD) and drummer Jeff Jensen, both of whom play on the new record. Recorded during the pandemic, Way Out West is as thematically heavy as anything King Ropes has done.

Some of the songs are about accepting the chaos, others more fed up with it — but it’s not an isolation album. The way these songs swagger and shake has the unmistakable feel of musicians sharing energy together in a room. There’s a palpable twang in Hollier’s voice, and an irreverent glint, even in the bleakest of times. The album is full of open spaces and jagged edges—from “A Loser and a Jerk,” with its brooding feedback moans, to the cathartic opener “Big Man on the TV,” with its mangled arpeggios and visions of a broke rodeo flailing amidst “the great wide open.” Guitars scrape and whine. Amps rumble. Rickety pianos rattle in and out of tune. Like the Treasure State itself, nothing is too refined. 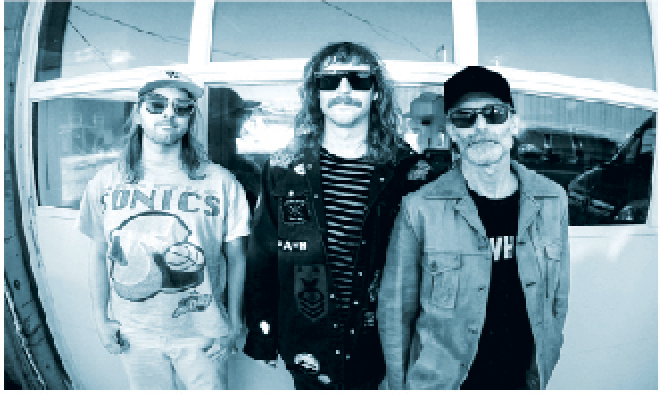 Brian Ripple: Today we are talking with King Rope’s front man Dave Hollier. Hello Dave, I hope during these strange times you and your family are staying healthy.

Dave Hollier: Hi Brian, you too. Strange times indeed. We feel lucky to be here in Montana. A lot of places seem to have been hit a lot worse.

BR: So, please tell us, where did you attend high school? If you recall, musically what were you listening to, or being influenced by the most at that time in your life?

DH: I went to high school in Bozeman. My friends and I were listening to pretty much what anybody our age was listening to. I remember being really psyched on Boston’s first couple of records. The Cars! Little Feat. ZZTop was a big one. Then pretty soon Elvis Costello and The Police and The Clash. A little more unique to being kids in Montana was stuff like Waylon, Willie, Merle, Lefty Frizzell, John Hartford, The Flying Burrito Brothers, that kind of stuff. There was a cowboy bar over by where the BMX track is now that had a jukebox full of that stuff where we’d go to dance and try not to get beat up.

BR: Been there, done that. How old were you when you started playing music? What led you to start performing?

DH: I’m a little bit of a late bloomer. I played guitar and banjo on and off in high school and in my 20s, but my brother, Bill, was a musician, and, it seems stupid now, but I distinctly remember a kind of unspoken understanding we had that music was his thing, and art was mine. I focussed pretty much on painting into my late 20s and eventually got more and more into playing music.

BR: Why did you start recording your music?

DH: It’s been 10 or 15 years now that I’ve been pretty obsessed with song writing, and recording those songs just seemed like the natural progression. To me, song writing, live shows, and recording, function like a three-legged stool. They all three inform one another. Without any one of the three, I feel off balance. Although I have to say that not being able to play live shows this last year has really made me lean into writing and recording, and that’s been pretty interesting. We will actually have another record coming pretty quickly on the heels of Way Out West.

BR: What made you relocate to Bozeman, and what has made you stay here?

DH: I’d always thought I would move back here, and it was a series of circumstances that kept me from coming back sooner. But I did love living in New York City. Almost my whole time there I lived in Brooklyn, which has become, you know, pretty trendy, but the neighborhoods I lived in were super rough and down and dirty for most of the time I lived there. It was sort of an alternate universe of “The Wild West”.

BR: In your own words can you explain your current band, King Ropes, to our readers a little bit? What is the overall goal, recording, touring, world domination, or a combination of all the above?

DH: World domination seems a little overly dramatic for some humble Montana boys. But we love touring, and coming into town and impressing people who had no idea what they were about to see is a pretty great feeling. We’ll keep doing this as long as we keep getting better at it.

BR: Where can people contact you and, or purchase a copy of the new album?

DH: Way Out West will be available everywhere on June 11. You can find us in all the usual places online. Facebook, Instagram…. Our music is streaming on Spotify, Apple Music, all those. You can buy music and merch on our band camp page, and we’ll probably have some vinyl records in Cactus and The Wax Museum. Our website, kingropesband.com can link you to all those.

The King Ropes album release party is Friday, July 2nd at the infamous Filling Station on the outskirts of new Bozeman. Josh Kinsel and the Love Darts will open the show. Advance tickets are available at the Wax Museum, 404 E. Bryant Street in Bozeman.