Sen. Steve Daines voted NO on the nomination of Rep. Deb Haaland to lead the Department of the Interior 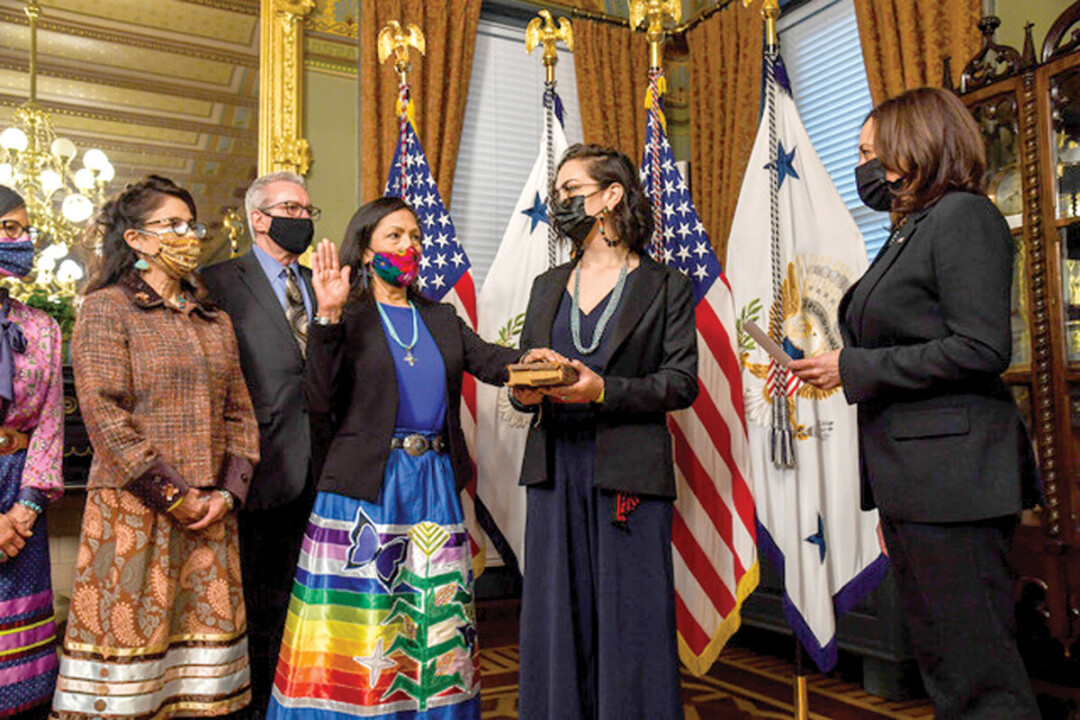 In what many observers are calling a landmark moment, the U.S. Senate confirmed the first Indigenous person to lead the federal agency responsible for managing much of the country’s federal lands, including millions of acres in Montana.

Senators confirmed Deb Haaland, a citizen of the Laguna Pueblo tribe and Democratic member of the House of Representatives, 51-40 on the afternoon of March 15, 2021. Montana Sen. Jon Tester, as he had previously indicated, voted to confirm President Joe Biden’s nominee.

Haaland becomes the first Indigenous person to hold a cabinet secretary position, despite opposition from some, including Montana’s other senator, Steve Daines, who said she supports positions detrimental to the fossil fuel industry.

In a statement after the vote, Tester said Haaland is qualified for the role and that he looks forward to working with her on issues affecting Montana, even though they don’t agree on all issues.

“Secretary Haaland has demonstrated a strong commitment to protecting Montana’s public lands, creating good-paying jobs, upgrading aging water infrastructure in rural America, and ensuring the federal government meets its trust and treaty responsibilities to Tribal nations,” he said. “Make no mistake, the folks who work in the extractive resource industries are essential to Montana’s economy, and I will continue to defend these jobs from burdensome regulations.”

Daines, among the Republican senators who voted against the nomination, has called Haaland a “far-left ideologue” with “radical” views, referencing her previous statements of support for banning oil and gas development on federal lands, permanently protecting grizzly bears and halting construction of oil pipelines. Haaland’s confirmation also comes as Daines and others have criticized Biden for cancelling a permit for the Keystone XL pipeline and pausing new oil and gas leasing on federal lands as he begins to implement a green-energy climate agenda.

“In Montana, we have a rich history of balanced wildlife and land management that allows us to enjoy recreation and promote energy development while still prioritizing conservation,” Daines said in a statement after the vote. “Rep. Haaland has pledged to learn from states like Montana that are able to balance these priorities, and I will hold her to this commitment and look for opportunities where we can pragmatically work together on behalf of Montana.”

Answering questions in front of the Senate Energy and Natural Resources Committee last month, Haaland said fossil fuel and other energy development on federal lands isn’t ending anytime soon, but that it will be balanced against other interests, adding that she would work to implement Biden’s agenda and not her own interests.

Haaland will lead a sprawling federal agency that oversees much of the country’s public lands for a wide range of uses that include conservation, hunting and energy development. In Montana, the Interior Department manages more than 10 million acres under the auspices of the Bureau of Land Management and the National Park Service. The department is also tasked with upholding the federal government’s trust responsibilities to more than 570 federally recognized tribal nations.

Many conservation and Native American advocacy organizations, like Montana’s Western Native Voice and the state Legislature’s American Indian Caucus, have cheered Haaland’s nomination as ensuring that public lands are responsibly managed with an eye toward preserving them for future generations while also giving Indigenous voices more power.

Tribal groups have hailed the historic nomination as a step toward improved relationships between tribes and the federal government.
“This is a historic moment to have a member of the first peoples of this land, now at the helm of the agency that oversees natural resources, public land management and the relationship between the federal government and tribes,” said Ronnie Jo Horse, executive director of Western Native Voice in a statement Monday. “This is a landmark moment for Indigenous leaders young and old, who will now see someone like them with shared values and experiences in a top leadership position in a presidential cabinet. We cannot overstate the positive influence and impact this moment has for Indigenous leadership both now and the next generations to come.“

Chris Aadland covers Native American issues as a Report for America Corps member based in Billings. He also monitors the Montana Supreme Court, federal courts and criminal justice issues. Before joining Montana Free Press in 2020, Chris most recently covered tribal affairs and Wyoming’s Wind River Reservation for the Casper Star-Tribune, and has also reported for the Wisconsin State Journal.