Crazy About the Crazies

Rising like ramparts from the high rolling plains of Central Montana, the Crazy Mountains are the highest and most rugged of Montana’s “island” mountain ranges. To the Crow people, they are known as Awaxaawapia Pia (Ominous Mountains) and are a place of power and religious significance. Crazy Peak and other mountains in this range are vision quest sites for the Apsaalooke (Crow). The high-country lakes of the Crazies are world-class and the peaks steep and hard to reach. There are small alpine glaciers to explore and waterfalls galore. The few trails traversing the range offer amazing adventures.

This range has a power and majesty that are hard to describe. Wild mountain spirits seem to roam the high country, drifting with the icy mists over the jagged summit and through the lonely passes. Ancient Rocky Mountain locusts, an extinct species of insect, are frozen in some of the glaciers. The mummified remains of a Mammoth hunter’s child from 12,000 years ago were discovered at the foot of the range in the Shields Valley. Plenty Coups, last Chief of the Crow Nation, envisioned the demise of the bison and the coming of settlers during his vision quest atop Crazy Peak. With nearly seven thousand feet of prominence, Crazy Peak (highest in the range at 11,214 feet) stands out like a beacon when seen from the plains. The Crazies are also a magnet for wildlife. Elk survive in large herds, moose munch the willows and mule deer browse in the forests. Although grizzly bears are not known to be present in the range, the bruins are well established in the Absaroka Range to the south and have recently been documented in the Little Belt Mountains to the north. Grizzly bears and other wildlife traveling between Yellowstone and Glacier may use the Crazy Mountains as a pathway between the ecosystems. The Crazies are also a stronghold for mountain goats and may hold a remnant population of rare wolverines.

The bedrock of the Crazies is gabbro and diorite, making up a smaller version of a batholith known as the Big Timber Stock. Shattered sharp rock dominates the steep-sides, glaciated peaks.

Climbing Crazy Peak is a quintessential Montana mountaineering experience. I’ve been to the top twice and both times were challenging and rewarding. There’s tons of loose rock to negotiate, an ice-filled couloir, and two big rock towers to work around before you get to the summit block. It’s remote and the weather can turn nasty really quick. Unfortunately, the top of the peak is private land, but as far as I know you are welcome to climb it. 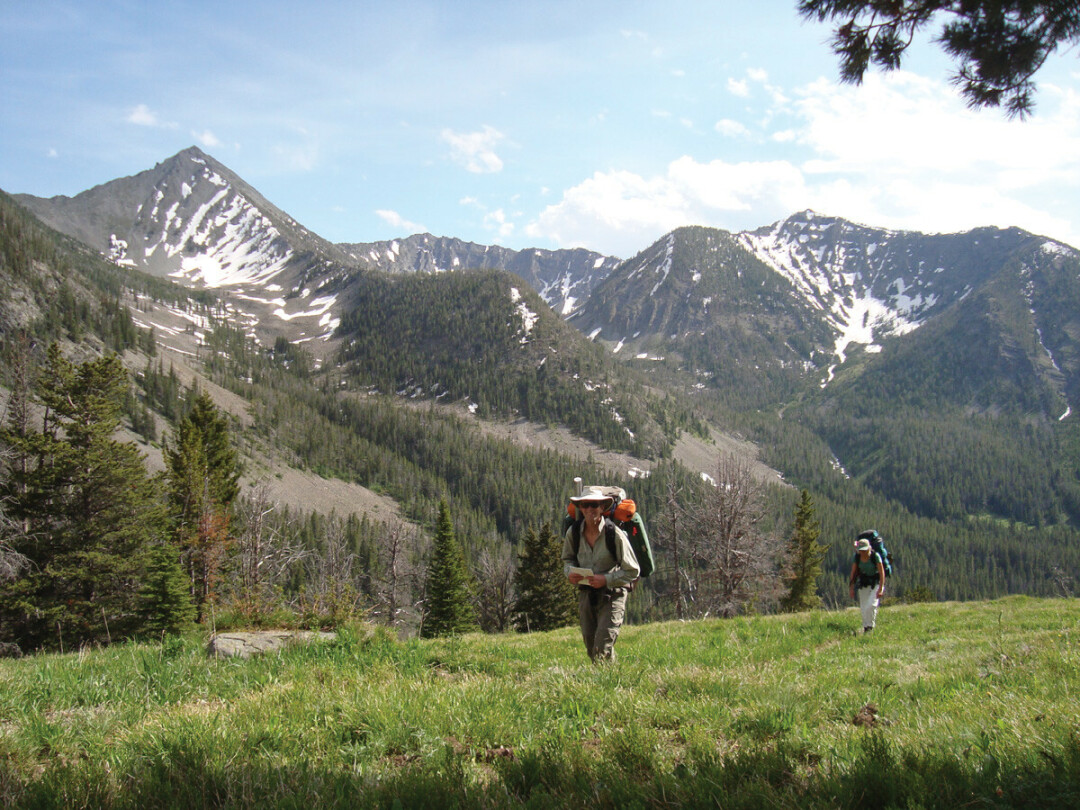 Other prominent peaks in the Crazies include Sunlight Peak, Granite Peak and Iddings Peak (10,936). The range has a reputation for poor public access, but the east side of the range offers trailheads at Big Timber Creek (Half Moon Campground is found here) and Grasshopper Creek, and on the west side, Cottonwood Creek trailhead gives you access to Cottonwood Lake and Trespass Creek. Trespass trail is a fantastic hike over the main divide of the range to Campfire Lake. In winter, the range feels much more remote and access is more challenging unless you have a snowmobile.

The Crazy Mountains suffer from split management and lack of coordination between two national forests – the Custer-Gallatin and the Helena-Lewis and Clark. There are also many private land sections in the range, making for difficult management and a roadless area perforated by inholdings. The core of the range contains over 90,000 roadless acres, but inholdings have hindered consideration of a Crazy Mountains Wilderness. These square-mile private inholdings are being acquired piecemeal by the Forest Service in a series of land swaps to trade out disjointed lower-elevation sections with private sections higher in the mountains. Some of the biggest lakes in the Crazies, such as Rock Lake and Smeller Lake, are on private inholdings.

The US Forest Service has proposed a Recommended Wilderness for the southern Crazies at about 10,000 acres, to be managed as Wilderness. This designation would be part of the pending final Custer Gallatin National Forest Plan.

One of my favorite locations in the Crazies is the Porcupine Cabin, one of the Forest Service rentals, a three-room backcountry palace with an easy 2-mile ski or walk approach and a fantastic location in a sprawling meadow near deep woods. Sunset views of the Bridger Range from here are unbeatable. We’ve stayed there more times than I can recall, often for New Year’s Eve parties and ski excursions into Elk Creek and up onto Bald Ridge.

My friend Dave and I backpacked in to Campfire Lake one summer, August of 2009. We woke at a smaller nearby lake to 4 inches of new snow! Montana’s mountains can deliver some real surprises, as we found out as we scuttled out of the range, cold and damp.
Despite the private land and increasing use, the Crazies remain remote, wild and alluring. This amazing mountain range deserves all the protection we can give it.