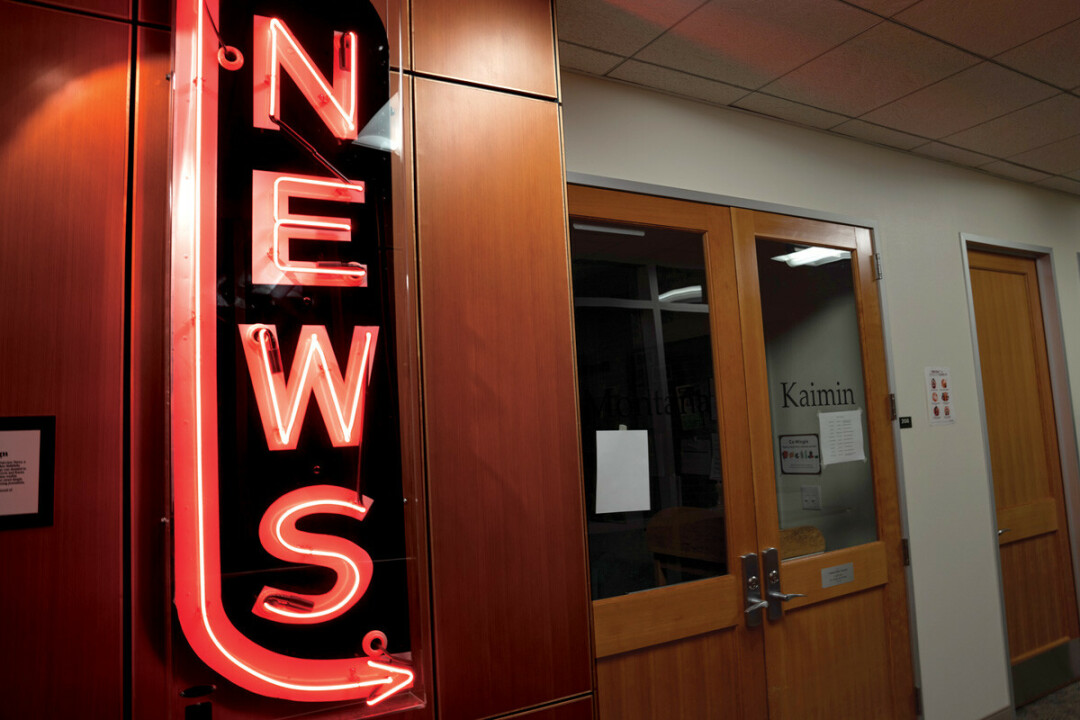 When Griffen Smith, a sophomore at the University of Montana, took a job as a sports reporter at the Montana Kaimin student newspaper two weeks into his freshman year, he never guessed that he would soon become “the COVID guy.”

Yet, a few months later in March 2020, Smith switched to covering the news right as the pandemic hit. While worried students began to leave town, Smith was one of the few who remained on campus. He started investigating what was happening with regard to COVID-19 and never looked back.

“One thing that I noticed [was], nationally, other colleges were releasing information that the University of Montana wasn’t,” Smith said.

More and more, student journalists are picking up the slack as local news outlets struggle to report on coronavirus from within colleges and universities. In Missoula, the staff at the Kaimin have been reporting on COVID-19 since March, calling for greater transparency from the University of Montana’s administration with increasing success.

In late September, a front page feature story on COVID-19 — co-authored by Smith and arts and culture editor, Alex Miller — followed one student’s account of feeling sick and getting tested for the virus, exposing the fear and stress many students face as cases have spiked throughout Missoula County. The story also revealed more detail about the two different machines used in student testing, including the fact that each of them can produce inaccurate results.

To Miller, one important takeaway from the story was the fact that — “Healthy Griz Kits” aside — the university cannot protect students. Students need to look out for themselves.

“I hope with this story, and with the further reporting we do, that responsibility spreads more than COVID,” Miller said.
While the University of Montana has slowly released information to students and the public, access continues to be a challenge for student reporters. Citing laws like the Health Insurance Portability and Accountability Act (also known as HIPAA) which regulates the disclosure of private health information, the university hesitated to release the number of active cases, for example, until a faculty senate resolution on August 25 demanded greater transparency.

Increased reporting on COVID-related issues in the Kaimin, however — including a story on the faculty senate resolution — could be a reason for quicker responses from the administration in recent months. For instance, after editor-in-chief Erin Sargent requested the university’s definition of isolation and quarantine, all students received an email the following morning containing both definitions. According to Miller, that was a good sign.

“Last spring, it felt like we, being the Kaimin, were a little bit behind everything the university was doing. And at that moment [when the email was sent], it really felt that we were running parallel if not ahead,” Miller said.

That sense of anticipating university actions and playing a role in shaping them has generated new energy in the Kaimin’s newsroom. While reporting on COVID-19 is time consuming — the newspaper’s September feature required a team effort to complete — its impact on the community has been worth it.

“While we’ve had to stay up late in the office and skip a class and get behind on schoolwork, I feel like this story is powerful in which it’s our collective story. Everything that has to do with COVID affects everyone and that’s what makes the story so important,” Smith said.
For Miller, this type of high stakes reporting reminded him of why he wanted to pursue journalism in the first place.

“This story helped spark me wanting to actually actively report again. It’s probably some of the most fun I’ve had in a very long time in this school… We’re not going to solve COVID with this story, but [we can] at least inform people that [care] enough to be informed,” Miller said.

Addie Slanger, features editor for the Kaimin, had an even wider perspective. While Slanger admitted that the coronavirus permeates almost every story in the Kaimin, she also noted the responsibility of student journalists to think beyond what most people immediately associate with COVID-19.

“The challenge for us… is to dig a little deeper. It’s a balance of maintaining our watchdog power and making sure that the university is being held accountable, while also making sure we display the voices of, for example, people with a disability who maybe aren’t getting as much help as they need with a COVID-adapted campus,” Slanger said.

After the September feature was published, Smith noticed a shift occur. By early October, the University of Montana had shut down extracurricular activities and additional classes moved online, followed by the first downturn in student case numbers since the school year began. According to Smith, the Kaimin staff also received requests from students at Montana State University in Bozeman, who wanted assistance with getting information about their own on-campus case numbers.

Carlee Baker, a news writer covering COVID-19 for the MSU Exponent student newspaper, was not aware of these requests, but noted that it would be helpful to receive extra support. Baker has felt frustrated with Montana State University’s lack of transparency as she has tried to report on COVID-19 this semester.

“There is information that the university doesn’t want out there,” Baker said. “But I exist as a part of the larger student community. It’s my job to keep people informed.”

Yet, while student journalists at the Kaimin have witnessed the positive impact of their work, the effort it takes remains significant.
“We are stressed. We’re limited,” said Smith, adding that the Kaimin news staff consists of three student reporters and one intern.
Normally, a full-time higher education reporter at the Missoulian would also be covering the university. But former reporter Matt Neuman, who covered the higher education beat from January – May 2020, has since left the newspaper. Due to consolidation within the news team, the Missoulian’s current education reporter is tasked with covering both K-12 and higher education, rather than being able to focus solely on the university.

“They’re kind of leaving this story to us,” Smith said. Without a dedicated higher education reporter at the Missoulian, a news hole has appeared with regard to COVID-19 coverage of the university in local media.

“That’s something that’s really stuck out about college journalism, especially here, is that we just have to do it ourselves,” Smith said.

Bowman Leigh is a graduate student in the University of Montana’s Environmental Science and Natural Resource Journalism Program.