Historic preservation seeks to retain the cultural landscape created by events in our past. All too often preservation focuses on architectural style at the expense of connecting a historic property to the person whose actions created that environment. Telling the stories of the entire spectrum of participants gives us all an opportunity to relate to a person important in our community’s history.   Bringing the people to the forefront of the conversation makes historic preservation relevant for all of us.

Bozeman’s Sunset Hills cemetery naturally reflects the full breadth of people who lived and died in a community at a given time. The headstones reflect all of the obvious stories of western development. Town founders John Bozeman and William Beall are laid to rest near merchant princes like Nelson Story. A whole section lacks stones or markers; this delineates the area where the destitute were given burial alongside the dead of the Chinese and African American population which constituted 10 percent of Bozeman’s population in the late nineteenth century.

The cemetery is a poignant place to explore the personal narratives of women who participated in Bozeman’s history. The graves of Kitty Warren (b. 1862, d. 1885) and Louise Buttner (b. 1862, d. 1883) bring to light one of the more unsavory parts of western towns: prostitution and the Red Light Districts where vice occurred.

The presence of Fort Ellis, and later the construction of the Northern Pacific Railroad, meant that Bozeman’s population in the 1870’s and 1880’s was overwhelmingly male. Helena madam Louisa Couselle saw a business opportunity and moved her house of ill repute from Helena to Bozeman between 1871 and 1874. She relocated to the Red Light District along East Mendenhall Street between North Bozeman and North Rouse Avenues.

Couselle possessed savvy business acumen and achieved the financial independence experienced by few women in the nineteenth century. By 1875 she’d acquired fifteen lots in the Main Street area and two farms outside of town. Couselle also made personal loans to a wide range of local residents, making her an interesting alternative to Nelson Story’s First National Bank. The $194 she paid in taxes caused the Avant Courier newspaper to name her one of the fifty-nine “heavy taxpayers of Gallatin County” in 1878. Couselle died in 1886 and left an estate valued at $20,000.
With Couselle’s financial backing, former employee Roberta “Kitty Warren” set up her own seven bedroom bordello by 1880. Like Couselle, Warren invested the profits from her enterprise in real estate holdings. She died at the age of twenty five from injuries suffered after she dropped a lighted match into the folds of her skirt. Warren is buried with another prostitute, Louise Buttner, whose suicide a year and a half after Warren’s death is a clear reminder of the desperate circumstances that often lead women to the Red Light District.

The businesses in Bozeman’s Red Light District ceased operation by the 19teens. Two buildings of the era remain; one in the alley bisecting the block portrays the window, door, window, door pattern typical of “cribs” where prostitutes work. Another, off of Mendenhall Street, is now a law office.
The life of Ellen Trent Story (b. 1844, d. 1924) sheds light on another part of the female experience of early Bozeman life. Ellen Trent married Nelson Story near Fort Leavenworth, Kansas in September 1862. They wintered in Denver, where Nelson ran a small mercantile and Ellen baked and sold cakes and pies. They departed Denver in March 1863 by wagon and arrived in Bannack in early June. Though it was the territorial capital of Montana, the tents and shanties of Bannack did not impress nineteen year old Ellen who is said to have exclaimed, “We traveled all that way for this?”

Within a few days the Storys departed for the new gold field of Alder Gulch. They settled in the area of Summit, along Alder Creek above Virginia City. Nelson freighted supplies up and down the gulch and ran a mercantile while Ellen mastered baking at high altitudes and again sold cakes and pies to the miners.

The Story’s bought a placer mine with the profits from their businesses in the spring of 1864. Nelson, notoriously hot-headed, once caught another miner trying to “jump” the Story claim and gunfire ensued. Story avoided being killed but shot the claim jumper in the hand, debilitating the man for life. It was one of many times that Nelson Story would be involved in violent acts that could have ended his life.

Ellen must have possessed an enormous amount of self reliance to live in such a place and time. She adeptly ran the Story mercantile when Nelson was away freighting, and later, on cattle drives and other business. Contemporaries remembered Ellen as “the most social and pleasant lady;” to what extent did her survival depend on her neighbor’s good graces during Nelson’s absences?

In February 1866 Ellen Trent Story gave birth to the first of seven children, Alice Montana, in Virginia City. That summer Story relocated his wife and daughter to Bozeman, near his growing cattle operation. By New Years Day 1867 the Story’s business and residence was in a small frame house on the corner of South Tracy Avenue and Babcock Streets. 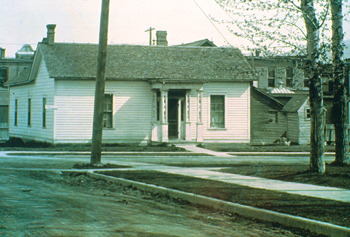 Sadly, the three headstones of the Story’s daughters in the Story plot at Sunset Hills are a reminder of the high childhood mortality rates of the nineteenth century. Alice Montana died in 1869. Another daughter, named Ellen, was born in Bozeman in 1870 and died of scarlet fever in 1872. A second daughter Alice, born in January 1881, died in March 1883 of croup.

Nelson Story’s business success enabled the construction of an ornate mansion on the 400 block of East Main Street in 1886. Though the historical record is incomplete, Ellen’s influence on the design and furnishing of the mansion is unclear. Story is recorded as speaking of the Bozeman mansion with the pronoun “I” rather than “we.” Did Ellen experience regret leaving the small frame house where so many momentous events in her life occurred?

Ellen Trent Story died in Bozeman in 1924. After 62 years of marriage to Nelson Story, who survived her by two years. The small frame house where she gave birth to five of her seven children, saw her sister married and mourned the early death of three daughters was moved in 1915 to the corner of North Willson and West Babcock and again in 1941 to it’s current location at 360 West Mendenhall Street.

If you’re interested in learning more about people important in Bozeman’s past, the Extreme History Project, a local non-profit organization dedicated to making the humanities more fun, interesting and accessible to the general public, will host walking tours of Sunset Hills Cemetery the weekend of October 26 and 27. Please visit their website, www.adventurethroughtime.org for more details.