One of my first patrols into the Yellowstone backcountry as a green seasonal park ranger was a three day trip into the Thorofare.

District Ranger Roger Rudolph thought it was a good idea for his frontcountry rangers to spend a few days in the backcountry each summer. That way, we were better informed about trails that took hikers into rugged terrain, remote thermal areas, turbulent streams, and face to face with unpredictable wildlife.

As a city slicker from Orange County, I was like a fish out of water on my first hike into the backcountry with Ranger Ray Fenio leading the way. My idea of roughing it was the Holiday Inn with a king size bed, remote control, large showerheads, soft fluffy towels, and a breakfast bar.
The first leg of the trip was by boat across Yellowstone Lake, down the Southeast Arm and a drop off at Terrace Point where we tossed full backpacks to the shore and jumped off the bow of a 25 foot Bertram.

Once on shore, we slipped our backpacks on over our shoulders, cinched them up and started the second leg of our backcountry patrol for a 17 mile hike on the Thorofare Trail to a ranger station at one of the most remote spots in the lower 48 states.
When Fenio and I reached the Thorofare Ranger Station it was getting late in the day and starting to get dark. Ranger Bob Jackson was standing at the front door and motioning for us to come on in. 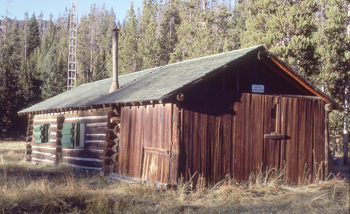 “I’ve got supper waiting for you. If you’d like?”

Jackson didn’t have to ask twice. I was starving after hiking miles and miles through lodge pole pine forest, wet meadows, and thick willows; and that smell of hot coffee was to die for.
I don’t think Jackson had seen anyone for days and talked our legs off for hours as we sat around the table listening to stories about life as a backcountry ranger. Jackson was one of Yellowstone’s longest-serving seasonal backcounty rangers and well known for his apprehension of poachers along park boundaries.

It was getting late into the night when the three of us decided to call it a day. I was dragging and more than ready to get some sleep before heading out at first light.

We moved to the back room of the patrol cabin where Jackson had set up three cots. I wound up in the middle of the room with Fenio to my right and Jackson to my left.

Just as the kerosene lanterns were turned off, the grizzly bear stories were on. Jackson and Fenio did their best to outdo each other with stories about grizzlies in the backcounty. 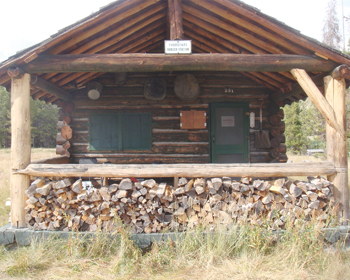 “Say Bob. What do you think about closing and locking down those windows?”

“Nah. Let’s keep em open so we can see the stars.”

For the next 2 hours, laying on that cot, I kept looking back and forth at both open windows. I kept thinking about a griz climbing through one of those windows before the night was over.
No sooner had I closed my eyes, I heard something banging up against the cabin. This is it. There’s a grizzly bear out there. We’re all going to die.

“Bob! Bob! Wake up! There’s something out there.

“Not to worry Rick. Its just Pumpkin. He’s probably hungry.”

Not taking Jackson at his word, I got up and looked out the window. Standing there in the dark, a few feet from the cabin, I could see a large pack mule waiting for someone to come out and feed him. I wasn’t volunteering to step one foot outside the cabin. Pumpkin would have to wait.
Back on my cot, I closed my eyes and finally fell asleep.

The next thing I heard was Fenio screaming, “He’s coming through the window!”

Fenio’s next words, “I’m sorry guys but sometimes I talk in my sleep.”

I looked at Fenio and told him, “This will be my first and last trip into the backcountry with you.”

In 1978 Rick Gale reported in for duty at Yellowstone National Park’s Lake Ranger Station beginning some of the most incredible experiences over the next 22 summers one could ever imagine. Rick is a current resident of Bozeman MT.