Come on nowâ€¦
Over the years, family and friends have listened to stories about my summers in Yellowstone as a Park Ranger.
“Come on now, you’re just making these
stories up.”
“No I’m not. That’s what really happened.”
“If they’re true, start writing.”
“Ok then. I will.”

Land-Ho!
Two of my 22 summers as a Yellowstone Park Ranger included boat patrol on one of the largest high altitude freshwater lakes in the world with 110 miles of shoreline.
There were days on Yellowstone Lake when I cut the engine on that 20-foot Bertram and quietly floated on the water. The majestic scenery took your breath away.

Canoeing and kayaking on Yellowstone Lake can be dangerous. The water temperature in the summer is typically 40 to 50 degrees Fahrenheit. Almost daily, sudden winds can create waves as high as 4 to 5 feet. These waves are choppy and very close together making it especially hazardous for small boats. On most days, winds are out of the southwest but at high altitudes and in thunder storms, the winds can shift at any time.

It was close to mid-night when we got a call about an overdue canoeing party who were attempting to cross the West Thumb of Yellowstone Lake. I met with the reporting party at the Bridge Bay Marina Ranger Station and learned that her husband and two sons should have been off the lake by now.

After getting as much information as possible about any medical conditions and a detailed description of the two canoes, I readied the Bertram for a search and rescue operation along the west shoreline of West Thumb.
While I was making preparations, George Monroe the Grant Boat Ranger did the same and got underway for a run north along the east shoreline of West Thumb to look for the two canoes.
Conditions on the Lake that night were not the best. It was dark, cloudy, cold, and breezy. About 45 minutes into the search, Monroe spotted a campfire and two canoes along the shoreline. It was them. They were OK. The three had decided not to risk crossing the channel when winds from the southwest had kicked up. Their plan was to try again at first light when weather conditions were better.

Time for me to turn it around and head back to Bridge Bay Marina.
I looked for the Lake Hotel lights to give me a sense of direction. I kept the bow pointed directly on the hotel lights and made my way north from Pumice Point.

Just west of Stevenson Island or so I thought, I started making a turn toward Bridge Bay Marina. Almost as soon as I turned the steering wheel to the left, I saw the bow lift several feet into the air and heard the sounds of props spinning loudly.
The boat was up and out of the water and sliding across a sand bar on the northern tip of Stevenson Island. My first thought. I’m a goner. This boat is going to crash and burn before I can jump off.

When the Bertram came to an abrupt stop, I was off and running for my life. When I thought I was far enough away, I stopped running, looked back at the Bertram, and waited for it to explode into flames.
Nothing. No explosion. No fire. That was a good thing.

And now, I had to get on the radio and request a search and rescue in the middle of the night to get me safely off Stevenson Island.
Within an hour, Boat Ranger Ray Fenio was on his way out of Bridge Bay Marina in a Boston Whaler to rescue Ranger Rick.
Because of conditions on Yellowstone Lake that night, we decided to leave the Bertram on the sand bar for the night. I was up bright and early the next morning to reclaim my boat and get her ship shape again for a visit by a U.S. Senator who just so happened to be in the area as a member of an appropriations committee.

By the way, the most northern point of Stevenson Island became known as Gale Point for the next few summers. 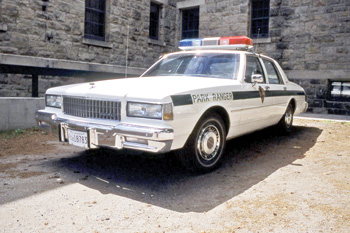 Bridger
One of my partners never had much to say. Bridger just sat there in the front seat of the patrol car under a smokey bear hat and stared straight ahead.

Bridger worked a lot of night shifts with me. He wasn’t much of a coffee drinker. When I stopped to get a hot cup of coffee at the Hamilton Store, he stayed in the car.
I always felt a little safer looking back and seeing his large silhouette in the front seat with his plastic eyes glued on the occupants of a car I just stopped.

From time to time, curiosity got the best of a driver.

“Who’s the big guy sitting back there in your car?”

“His name’s Bridger. We’ve been partners for years. Driver’s license and registration please.”

During the daylight hours, I often parked on one of the dirt pullouts just south of Fishing Bridge Junction and sat Bridger on top of the light bar watching traffic.

For some visitors who were driving way too fast, it was a double take. It was the first bear they’d seen while driving through Yellowstone. Brake lights would go on and kids could be seen looking through the rear windshield smiling and waving.
Even without a gift for gab, Bridger became a well-known celebrity in the Lake Area. He was a natural and had a talent for breaking the ice.

Sadly, Bridger’s days ended when our golden retriever Bear got jealous of him for spending way too much time with Ranger Rick.

Bear dragged Bridger off to a quiet place in the trees outside our cabin and unstuffed him.

Meal On Wheels
Every August, like clockwork, Bear #88 made his way through Pelican Valley and into Fishing Bridge Campground.

To my knowledge, this all black grizzly bear never hurt anyone while raiding and plundering a few campsites every summer which always resulted in his capture and return to the backcountry with a radio collar.
It was August again and my turn to monitor the bear trap we had baited with slices of cantaloupe from the kitchen of Lake Hotel. I parked my truck about 50 feet from the trap in I Loop and rolled the windows down and waited to capture this repeat offender.
It was just a few minutes after midnight when I heard the loud clang of metal on metal. The trap had been triggered. I started the engine and drove slowly toward the trap not knowing for sure if Bear #88 was actually inside the steel culvert.

Before getting out of my truck, I aimed my flashlight toward the trap and could see the reflection of his eyes staring me down. I had him!

As I walked toward the trap, he started pacing back and forth. It was then that I noticed the steel pegs for locking the cage door were not in place. Not good. He hit the cage door he might be able to lift it and get out. And I would be his next meal on wheels.
My first thought. “RETREAT!” And that’s exactly what I did. Back to the truck and on the radio calling for help.

Within a few minutes, three Lake District Park Rangers were on the scene to cover me while I climbed on top of the bear trap and forced the metal pegs into open slots that locked the cage door down.
A short time later, Bear #88 was on the road again and driven back to Pelican Valley where he was released and told to stay out of Dodge.

Stories about trapping bears wouldn’t be complete if I didn’t tell you about another mishap I had with a bear trap that unhooked itself and tried to pass me in a no passing zone.

I really thought I’d hooked up the trailer the way I was shown by my supervisor that night. I was driving north on the Grand Loop Road toward Canyon when to my disbelief the empty bear trap was attempting to pass me on a curve near Le Hardy Rapids.
Sparks were flying everywhere and across the hood of my truck as the trailer hitch dug into the asphalt.   I hit the brakes and steered right into a pullout. Lucky me. The bear trap came to a stop just a few feet short of going over the edge of an embankment and into the Yellowstone River.

Did I get on the radio and as for some help? Nope. Not me. I got back in the truck and backed it up and hooked the bear trap up again and was on my way to Buffalo Ford Picnic Area where a grizzly bear had been treeing fly fishermen for days.
After several mishaps like this one, I decided it was time to do some research on my own to get the inside scoop and poop on bear traps that just didn’t do what they were meant to do.

I learned that for decades bear traps were designed and constructed without quality control and standard technical specifications. Consequently, traps were fraught with problems which included frequent malfunctions that sometimes required park rangers to return to their quarters and for a fresh uniform and undergarments.

Yes. I’ll admit it. I was one of those rangers.