Weed To You, Delicacy To Me 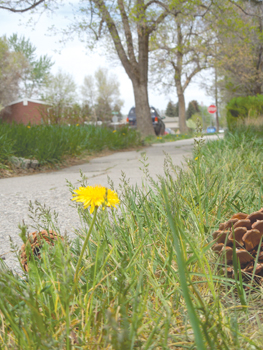 It’s spring time in Montana, time for gardening, planting, and weeding. But wait, don’t dig up that dandelion or throw out those pine cones just yet! Dandelion salad, roasted pine cone seeds, and many more urban plant foods are becoming commonplace meals around dinner tables everywhere. Instead of purchasing food at markets and grocery stores, people are choosing to revisit old ways and forage for their food closer to home; they are choosing to become Urban Foragers.
Currently, more humans live in urban environments than in rural ones. Options for natural, local food can be limited to grocery stores that choose to carry such items, seasonal farmer’s markets, and backyard gardens (if you’re lucky enough to have one). But according to the Urban Forager opportunity for natural, local, free food is right outside everyone’s front door. A simple walk around town or in pre-scouted areas can reveal stashes of edible plants and fruit.

Caleb Philips and Ethan Welty, two inspired Urban Foragers, have launched an interactive map called Falling Fruit. This map identifies areas all over the globe where urban edibles can be found. Falling Fruit allows the viewer to contribute to its database thereby creating an ever-growing Urban Forager’s resource guide.

Rebecca Lerner took her commitment to Urban Foraging a step further. What began as a week-long dare to live strictly off of wild plants, turned into a life-changing adventure that inspired her book Dandelion Hunter: Foraging the Urban Wilderness. Leaping from life as a newspaper reporter in New Jersey, Lerner has replanted herself as a leading figure of Urban Foraging in Portland, Oregon.

According to Steve Brill, Urban Foraging is nothing new. Brill has been educating the public on Urban Foraging since the early eighties. Giving scheduled Wild Food and Ecology Tours, Brill has led a twenty year long career educating the public about urban plant life. In 1994 he authored the book Identifying and Harvesting Edible and Medicinal Plants in Wild and Not-So-Wild Places.

Gaining momentum, the Urban Foraging movement has inspired more than individuals. In January of this year, El Segundo, California announced the opening of Del Aire Fruit Park. This urban orchard that will be maintained by the public, houses an assortment of plants–avocado, fig, and even grape vines can be found on the grounds. In addition, the city of Seattle is developing Beacon Food Forest. This seven-acre public plot will be urban wood where people can gather socially, develop individual gardens, and seasonally forage the developed permaculture (i.e. a self-sufficient agricultural ecosystem). Close to home, passionate advocates are encouraging the idea of a permaculture. Hot Springs, Montana’s Michael Pilarski – Friends of the Trees Society/Inland Northwest Permaculture Guild – teaches permaculture classes in Missoula. Pilarski and the Guild claim that widespread permaculture is the only way for humankind to combat food requirements and achieve sustainability.

With Urban Foraging becoming increasingly popular questions regarding its legality have surfaced. In other words, since the wild rhubarb in Lindley Park is not “yours” do you have the right to pick it and eat it? Generally speaking this question has been answered with a resounding yes; yes you do have the right! Urban Foragers have consistently invoked the right of public domain regarding this issue, but qualify that local statues may specifically prohibit or regulate Urban Foraging and that educating yourself ahead of time is the best bet.

Legality however is not the only concern for the Urban Forager. General safety regarding an urban foraged food can also be suspect. Pesticides, environmental contaminates, and poisonous plants are important concerns. In order to avoid these potential dangers, the Urban Forager must ensure the food foraged is free of pesticides, particularly non-food grade ones. Another high priority is to avoid harvesting in areas that are exposed to a lot of exhaust or the possible canine visitor. Finally, proper plant identification is crucial. For instance, Queen Anne’s Lace looks dangerously similar to Water Hemlock, the same herb Socrates used to end his life. In other words, do not eat it unless you are 100% certain about the food’s identity.

But what about the Urban Foragers who take more than their fair share or possibly damage the plant when harvesting it? Also known as Guerilla Urban Foragers. So far no universal measures or rules have been applied to these individuals; however it seems that any self-respecting Urban Forager acts according to an unspoken rule, “do not take more than you need and be respectful of the area, people, and future foragers.”

But here’s the real question: How does it taste? Can foraging in an urban environment really yield food that is not only filling but fulfilling? According to many avid Urban Foragers they have become regular culinary artists! A simple Google search of “urban foraged food recipes” yields on-line posts, articles, and entire books of dishes derived from urban foraged foods. For instance check out this Dandelion Salad with Vinegar and Oil Dressing courtesy of Tammy’s Recipes (http://www.tammysrecipes.com).

Instructions:
1. Wash the dandelion greens in water in the sink. I usually wash in at least two sinks of water, and then cut off the root and put the (now separated) dandelion greens in a clean bowl. Be sure to include the buds (which have not flowered) — they’re tasty!
2. Combine dressing ingredients in a container with a tightly sealing lid. Shake until sugar is dissolved.
3. Put dandelion greens into a large bowl (to allow room for stirring). Pour dressing over greens and toss to coat. Serve into bowls and add optional toppings if desired.

Additional Notes:
*Dandelion greens are best eaten before the flower has appeared. Using a large flat-head screw driver (or similar object); cut the root of the dandelion to release the plant.

Urban Foraging focuses on basic values: gathering natural food that grows seasonally as part of urban environment, collecting local food that helps reduce the carbon footprint involved in food transport, creating less food waste by utilizing sustenance that would otherwise go unused, encouraging individuals to take advantage of free food sources, and finally, encouraging a more involved relationship with a food’s origins.
One thing is for sure, Urban Forager, Wild Forager, or Store Forager; whether it’s the cattails along Bozeman Trail, or the random chives that have made their home in my front yard, the plants that make up our parks, trails, and lawns don’t seem so random anymore.

Julie Gandulla is a freelance writer and speaker, as well as a writing and communication consultant. Owner of Zen Shorts In The Rockies, Julie strives to inspire and empower others to communicate effectively with the spoken and written word. www.zenshortsintherockies.com