On a backpacking trip in the Alps last summer I, by chance, ended up alongside Jacob, a hiker from the Netherlands. As we talked, I discovered that he was a fellow homebrewer and immediately steered the conversation to beer. While I was familiar with many of the traditional European beer styles and techniques, I was very curious about what innovations where happening at the small brewery and home brewing level. We talked at length about favorite recipes and beers, and considering the strong history and tradition of beer in Europe, I was impressed to hear about some of the non-traditional ingredients and approaches that were being employed. When the conversation steered toward use of hops, however, I was taken aback when Jacob stated his opinion that “hops should only be used to support and balance one’s use of malts and yeast.”

At that moment I would have given anything for a fresh pint of a Northwestern IPA poured straight from the tap so that I could make Jacob stop in the middle of the trail and appreciate the fruity, floral aromas only then take a sip and be grabbed by the intense citrusy sweet flavor that only hops added by the handful at every step of the brewing process can create. American IPAs, you see, are beers that embrace the antithesis of Jacob’s statement; the malts are added only to balance out one’s use of hops.

The IPA, or Indian Pale Ale, was first created in England in the 19th century. While it’s commonly believed that English brewers originally made this higher-alcohol, heavily hopped beer to help preserve it on its lengthy sea voyage to India, there is some doubt as to the accuracy of that story. Whatever the English IPA’s origins, however, the beer has transitioned into a style of its own in the United States.

To discuss IPAs in any meaningful capacity, we first have to discuss hops. Hops are plants which grow green cones on tall vines. Those cones are a major component of most beers around the word. As far as beer is concerned, hops have two main aspects that contribute to the finished product. Alpha acids are the component of hops that cause bitterness, while the hop’s essential oils are what provide hop flavor and aroma to the beer. 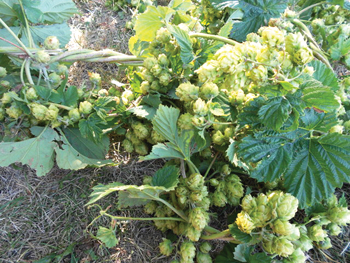 Bitterness
Without something to contribute bitterness to beers, the sweetness from the malts would be overpowering and make it a beverage indistinguishable from the beer you find on store shelves today. Historically, various combinations of herbs and plants were used to create that bitterness until hops became the standard ingredient. The bitterness that is extracted from hops is most commonly measured in IBUs (International Bittering Units).   The more IBUs, the more bitter-tasting the beer will be. Transferring this bitterness into the beer requires the hops to be boiled with the wort (unfermented beer), generally for 60 minutes or more. This converts the alpha acids into isomerized apha acids, which can then be dissolved. When you taste a beer of any style and notice a bitter, often sharply bitter, aspect of the beer, you taste those boiled alpha acids.

Hop Flavor
While the bitter part of flavor of beers may seem similar across the board, seeming to vary in intensity only, the flavors imparted by hop essential oils are another matter entirely. Out of the dozens of varieties of hops used by brewers, each hop variety chosen will impart a different flavor into the beer, from spicy to citrusy, from earthy to pine, from herbal to mango. The flavors that a thoughtful brewer can impart into his or her beer are impressive, especially when one begins to mix and combine hop varieties. The oils that impart these flavors are extremely volatile when compared to the alpha acids. To preserve the flavors, a brewer will add hops into the boil at a much later time than the bittering hops so that the characteristics of the oils are not lost to evaporation or chemical transformation.

Hop Aroma
Ironically, despite the fact that this was a drink that endured the long trip from England to India so well, many modern IPAs have an extremely short shelf life. This is because of the aforementioned volatility of the essential oils. Hop flavor is more delicate than hop bitterness, and hop aroma is the most delicate of all. Brewers will often not boil the hops that they want to use for aroma at all, instead adding them as soon as the heat is removed from the kettle, or even near the end of the fermentation of the beer, a technique referred to as dry hopping.

Once a beer containing lots of hop flavor and aroma is completed and put into a keg, bottle or can, the clock begins ticking. Hop aroma, in particular, begins to fade mere weeks after it is first ready to drink. This is particularly a problem when you consider the fact that beers from commercial breweries that distribute their beers across the nation can take months to get from the factory to your glass. The best way to get an IPA with excellent fresh hop aroma and flavor is to buy it on tap at your local brewery.

The next time that you buy an IPA, take several moments to enjoy the distinct aromas present in that beer and try to identify them as spicy, citrusy, fruity or herbal. Once you take a sip, do the same with the hop flavors present. See if the flavor matches up with the aroma. If not, perhaps the brewer used different combination of hops for the aroma than they did for the flavor! Finally, when you taste the bitterness, try to see how well balanced it is with the sweetness of the malts. Some IPAs have more bitterness and some have less, and which you prefer is simply a matter of personal preference.

Try visiting the Bozone, the 406 Brewing Company and Madison River Brewing for some of the best and freshest IPAs around, and don’t hesitate to ask your server for more information about the use of hops in that particular beer!

Justin van Almelo can be contacted at jvanalm@gmail.com.