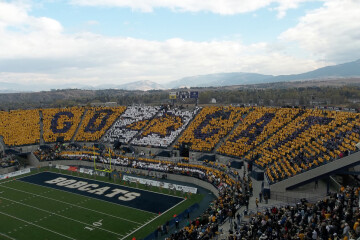 Bobcat Stadium, formerly Reno H. Sales Stadium, was built in 1973 at the cost of around a half-million dollars and the Stadium was renovated prior to the 1998 season for about $12 million. The renovation project included new concession stands and restrooms in the Stadium's west stands; a new north end zone complex, featuring dressing facilities for teams and officials; and a new grandstand which boasts 38 sky suites, an indoor stadium club, a corporate entertaining area, and press facilities. The stadium received a facelift in 2008 with the installation of artificial field turf. The turf was a gift from the 1984 Bobcat Football national championship team and friends.

The Bobcat Stadium had a recent addition of a new endzone named after Montana State University great Sonny Holland for his dedication to Bobcat Football as both a player and a coach. This addition is located on the south end of the stadium and offers 5,200 more seats, increasing the total capacity to over 17,000. The stadium also features a state-of-the-art  scoreboard located on the north end of the facility. The scoreboard was designed and created by a Bozeman based company, A2D3. The Stadium's Martel Field is named after Bill Martel, the Bozeman contractor who was instrumental in the project's completion.