Rollin Beamish | The Situation is Excellent 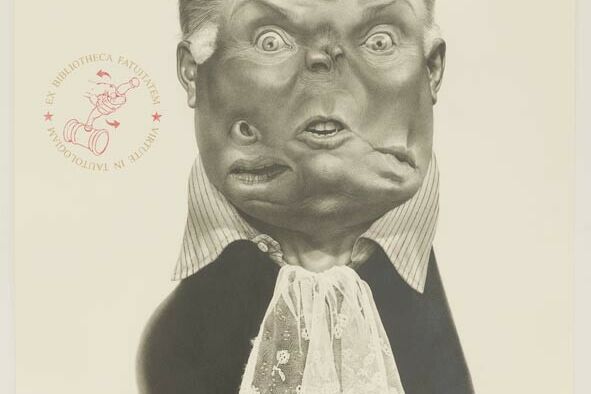 ROLLIN BEAMISH THE SITUATION IS EXCELLENT September 11 - October 30, 2021 Opening Reception Saturday, September 11, 4–7pm The core substance of the exhibition “The Situation is Excellent” consists of five large, three-part works that could only inadequately be described under the generic category of drawing. Each of these works appears as a conceptually exacting combination of virtuosically drawn figurative elements, puzzling phrases, imposing emblems and logos, and Latin maxims combined with rather enigmatic texts. The protagonists of these works are bizarre composite figures, combined from varied fragments of faces in which, little by little, one can recognize prominent individuals from contemporary politics and business. These nightmarishly distorted hybrid creatures are named after roman deities: Necessitas, Nox, Arges, (Pseudo) Moneta, and Saturn – the artist describes them as “titans”. The monstrosity of these figures is representative of monstrous outgrowths and aberrations of society which are unmasked with biting satire in Beamish’s exhibition. To some extent, the “titans” frame the dark underside of a society which, with a view toward classical models, once sought to constitute itself as a “republic of virtue”. The works thus prove themselves to be allegorical taunts that are further contextualized through their arrangement in installation. As such, in lieu of a catalog and simultaneously as an integral part of the installation, the artist published a newspaper specifically for this exhibition. In it, under the disquieting title “Saturnalia Oracle”, heavy doses of critical social theory are presented with plenty of irony and in an escalating aphoristic tone. The exceedingly complex exhibition concept can be understood simultaneously as an inquiry into the significance and function of art within an increasingly economized art market as well as of a society molded by internal contradictions and entrenched ideologies.